Interview with John Heald – Life on a Cruise Ship and Carnival Funships 2.0

Posted on March 3, 2014 by LBcruiseshipblogger

On our transatlantic cruise on Carnival Breeze, we had the opportunity to do an interview with Carnival’s popular spokesperson and best-known cruise director John Heald.  In this segment he talks about what it is like to live on a cruise ship and the upgrades to Carnival’s ships called Funships 2.0.  He also mentions a kitchen (galley) tour. 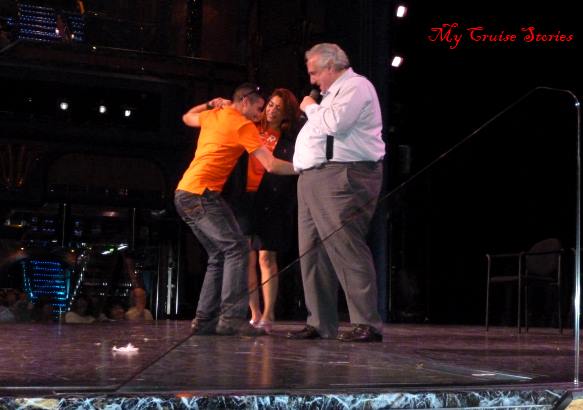 John Heald was the cruise director on our cruise on the Breeze.  His very popular morning show filmed in the Club O2, which is normally the hangout for teens.  Deck chairs filled to watch his show on the big outdoor screen, many people watched on their cabin TV’s, and each day more people showed up live as they discovered where the broadcast came from.  One day John graciously stayed after the show so we could film this interview.

John mentions both Guy’s Burger Joint and the Blue Iguana Cantina in this interview, as both are part of the Funship 2.0 upgrades.  People often wonder if it costs extra to eat there, and will be happy to know that it doesn’t.  The Red Frog Pub does have a very small charge for the excellent fresh made-to-order food found there.

In this video, John Heald talks about what it is like to live on a cruise ship and Carnival’s 2.0 upgrades.

Other blogs from the interview with John Heald include Best Places on Carnival Breeze, Things to Do and Best Kept Secrets, and Left Behind in Port, Gratuities, Rescue at Sea, Quick Fire Questions, American Table.  For more detailed information about Funships 2.0, see this blog.

MyCruiseStories blog tells stories about adventures in cruising on ships big and small. Things to do onboard and in port. Anything connected to cruising. Also food, travel, recipes, towel animals, and the occasional random blog.
View all posts by LBcruiseshipblogger →
This entry was posted in Breeze, Carnival, Shipboard Life and tagged Carnival, Funships 2.0, interview, John Heald, life on a cruise ship, photos, video. Bookmark the permalink.

8 Responses to Interview with John Heald – Life on a Cruise Ship and Carnival Funships 2.0