Posted on March 10, 2014 by LBcruiseshipblogger

Looking for something new to try, I decided to try making stuffed bell peppers.  All the recipes I looked at whether online or in a cookbook looked rather plain and boring, consisting mainly of hamburger, plain white rice, tomato sauce, and maybe a bit of mozzarella.  While they all mentioned putting sauce over the peppers before baking, none of the photos of the finished peppers actually looked like they had any sauce on them.  So after my usual fashion I just used some of their basic how-to instructions for an idea of how they are made and then did a lot of things differently to make the recipe my own.  I don’t know about other people’s stuffed peppers, but these are very flavorful and delicious.

1 can tomato sauce or a jar of spaghetti sauce 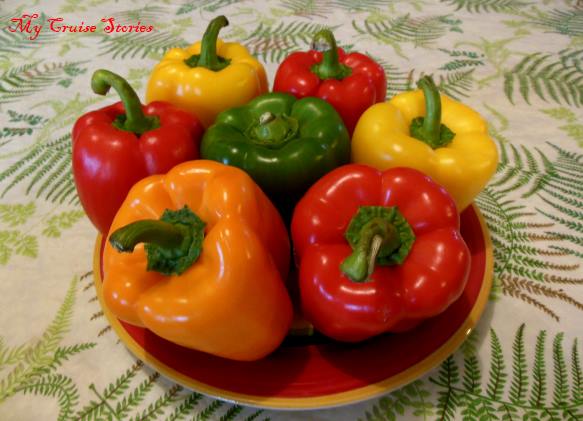 When shopping for bell peppers, make sure to choose only peppers that not only look good without blemishes on the outside, but also stand up on their own.

Prepare Zatarin’s black beans and rice following package directions using the full amount of water.  Make sure to give the rice a stir now and then while it cooks.

While the rice cooks, prepare the peppers.  Set a large pot with enough water to cover peppers completely on the burner so it heats to boiling while you cut the peppers.

Thinly slice each pepper around the top.  If the top of the pepper is even, a circle of good useable pepper should lift off leaving the stem intact.  If it is not even then it will come up in two half circles.  Dice the removed pepper tops and set aside.

Set the prepared peppers into boiling water so they are standing up.  Boil peppers for five minutes then remove them from the water and set them aside in standing position with the water drained out of the inside of them.

Shred the carrot and the zucchini.  You can peel them first or not, whichever you prefer.

Dice the 1/2 onion and add it to the diced pepper tops.  Heat large non-stick frying pan.   In 1 Tablespoon olive oil, saute onions and pepper tops.  When they are partly cooked add the ground turkey.  When the turkey is partly cooked add the shredded carrot and zucchini.  When the meat is done and the veggies are soft drain off any grease.  Stir the rice and beans and 1/4 cup tomato or spaghetti sauce into the meat mixture.

Pour the rest of the tomato or spaghetti sauce into the pan or dish you plan to bake the peppers in.  Stand all the peppers upright in the sauce.  Spoon the filling into the peppers.  Cover the pan and bake at 350 degrees for 45 minutes.  Remove cover and top each pepper with shredded cheese.  Use whatever type of cheese you like.  Bake uncovered 15 minutes more.

I used monterey jack cheese on the yellow and green peppers and pecorino romano on the red and orange ones.  As the photo below shows, the monteray jack melted better than the pecorino romano.

Put each pepper in a bowl, spoon the sauce from the bottom of the pan over the top of the peppers and sprinkle with parmesan cheese.  Enjoy. 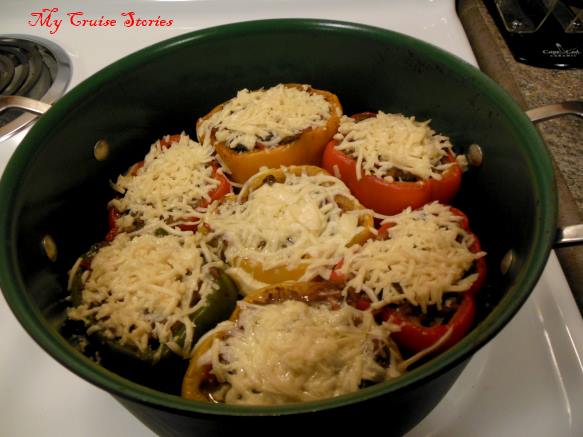 If you live in Australia these would be called Stuffed Capsicum since that is what they call bell peppers there.

MyCruiseStories blog tells stories about adventures in cruising on ships big and small. Things to do onboard and in port. Anything connected to cruising. Also food, travel, recipes, towel animals, and the occasional random blog.
View all posts by LBcruiseshipblogger →
This entry was posted in recipes and tagged cooking, photos, recipe, stuffed peppers. Bookmark the permalink.