Posted on July 1, 2016 by LBcruiseshipblogger 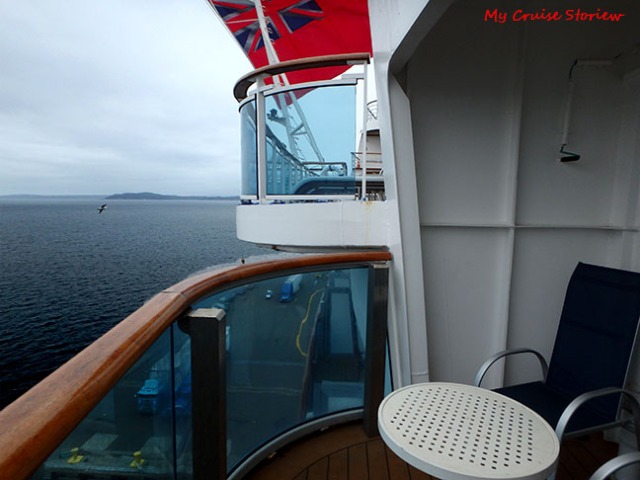 Like all the major cruise ships, Ruby Princess has an array of staterooms to choose from ranging from the smallest, least expensive inside cabins to the biggest fanciest suites and everything in between. There’s something for everyone whether it means cruising in luxury or cruising for the lowest possible price. 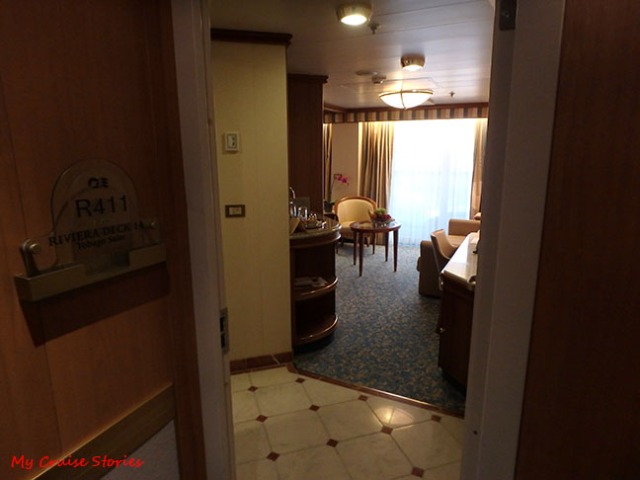 Besides the extra space suites come with perks including priority boarding, a special line at guest services, and nicer amenities in the room. 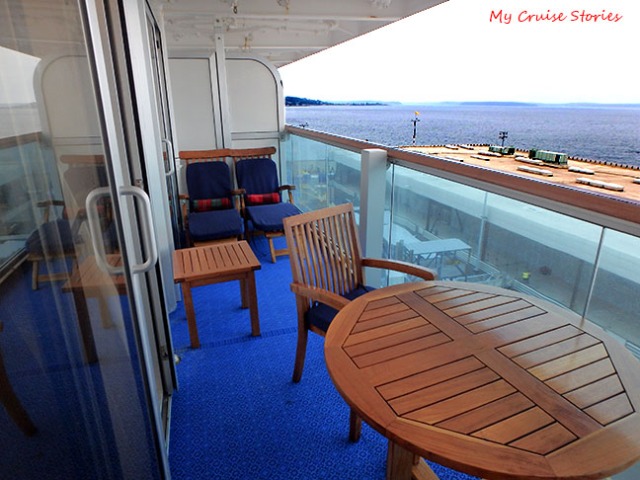 While some ships have all sorts of oddly-shaped rooms of varying sizes near corners, most rooms on the Ruby Princess are standard size for their category, with the accessible rooms running at the large end of the size range. 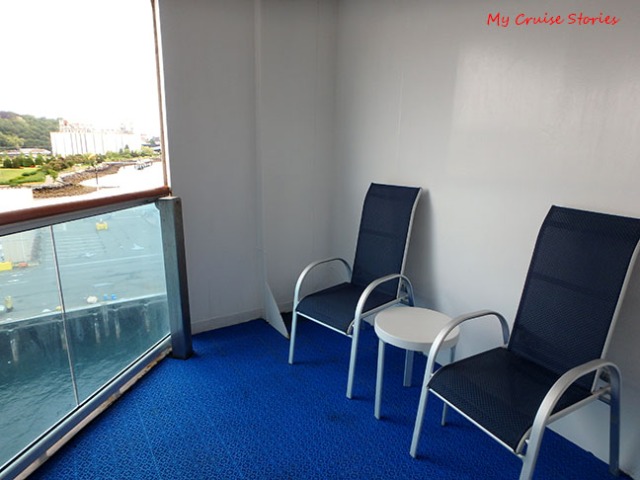 If you scout the deck plans thoroughly you can find a few larger than average oceanview rooms near the bow on the plaza deck and a small row of oceanview obstructed rooms at the bow of the Lido deck that vary quite a bit in size. Some decks have larger verandas than others. A couple rooms near the stern of the Rivera deck have particularly large balconies. 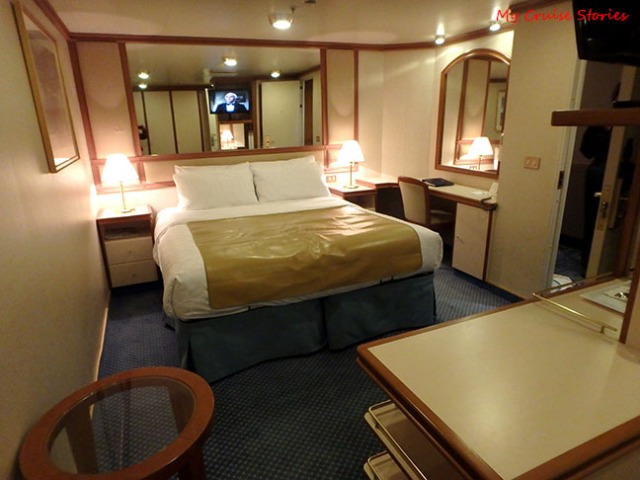 There are also a few larger than average interior rooms that are rotated the opposite direction of most cabins, mainly on the Rivera deck. 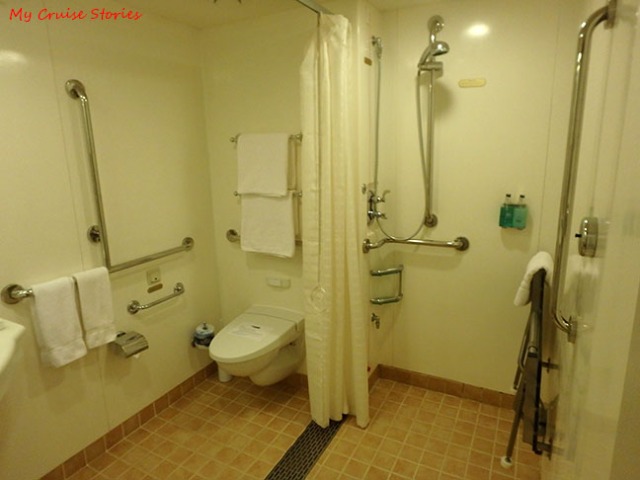 Standard rooms have showers and most suites have tubs. Hand soap and hand lotion are provided and the showers have dispensers with bodywash and a combo shampoo/conditioner. Accessible rooms of all types have larger than average bathrooms with roll-in showers that have handrails and fold-down seats. Standard room amenities include a refrigerator, television with satellite TV, hair dryer, safe, phone, and daily cleaning and turn-down service with a chocolate for each person in the room every night. Rather than the usual single outlet found on a lot of ships, our cabin had 3. 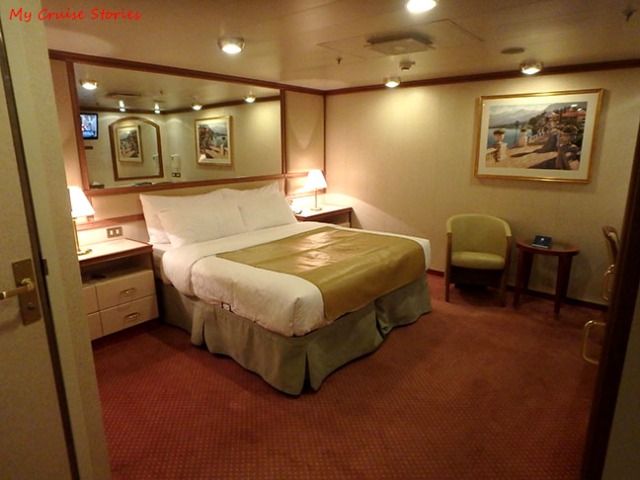 Interior cabins provide all the basics a passenger needs. A place to sleep, somewhere to keep your things, and of course a bathroom. 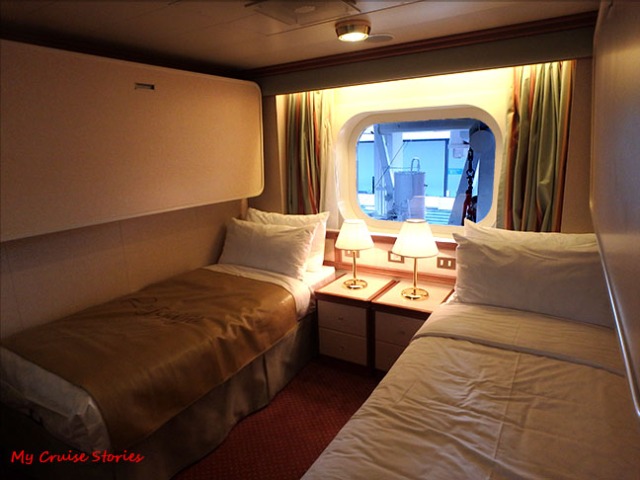 If you want some natural light, a bit bigger room, and yet would like to keep the cost down try an oceanview room. The lowest in the price range are in the obstructed view category. 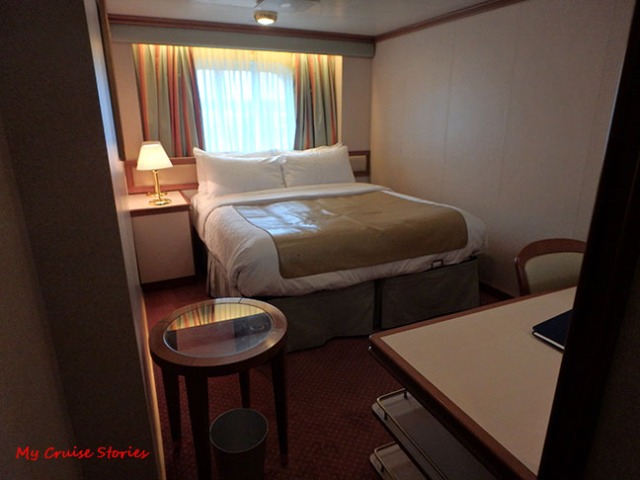 The staterooms with a full view still cost considerably less than balcony cabins. Ocean view rooms are often found on decks too low for balconies which means great close-up views of the water. Rooming on the lower decks also makes a good way to avoid crowds since you are often going down when the majority of other passengers are going up and are usually close to the exit deck in ports. 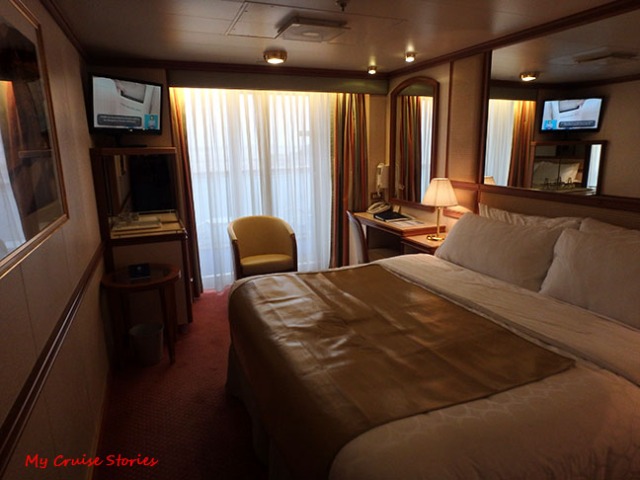 Balcony cabins provide a bit of private outdoor space. If your cruise takes you somewhere scenic it’s nice to have a place to go where you can see the scenery without jostling for space among the crowd in public areas. The sliding door also provides a larger view area than the windows in the oceanview rooms. 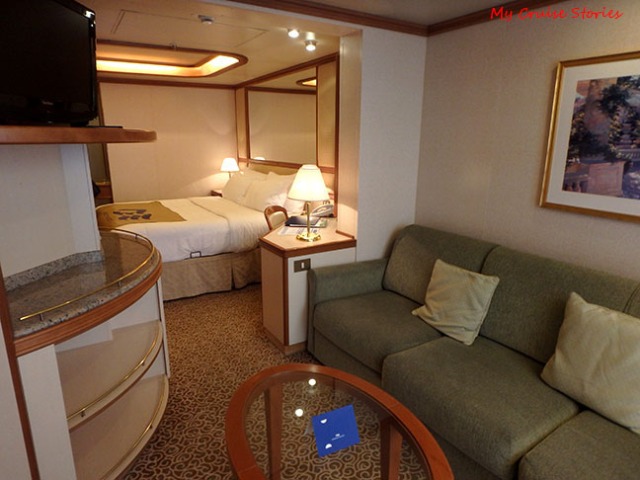 Mini-suites with their larger rooms and bigger balconies are a step up from balcony cabins without paying the price of a full suit. 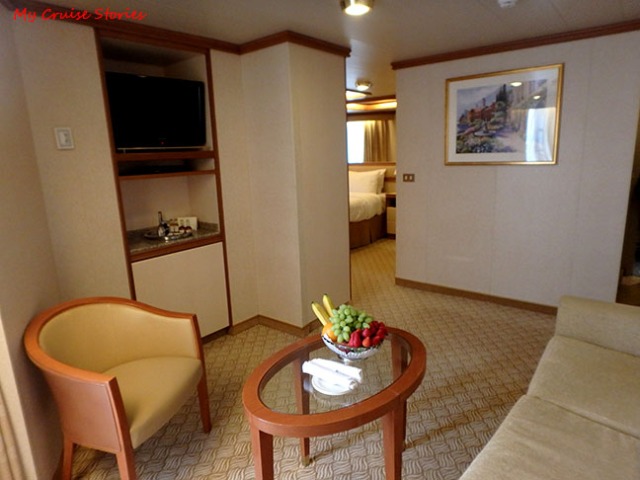 Those who really want to cruise in luxury will find it in the suites. Ruby Princess has quite a variety of different suites. 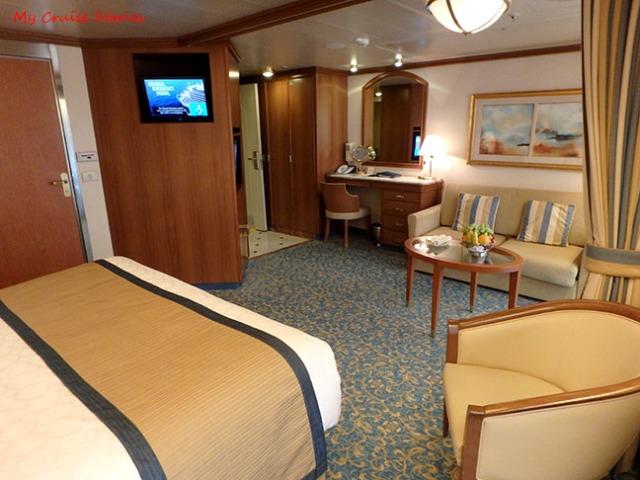 Although all the suites are larger than other cabins, there are still some ADA suites with the extra-wide doors and ADA bathrooms with the roll-in shower rather than the tub that comes standard in other suites. 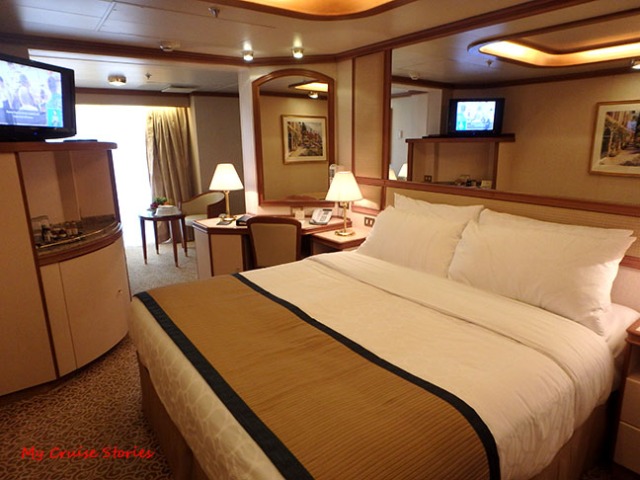 Family Suite D106 is quite a large room on its own 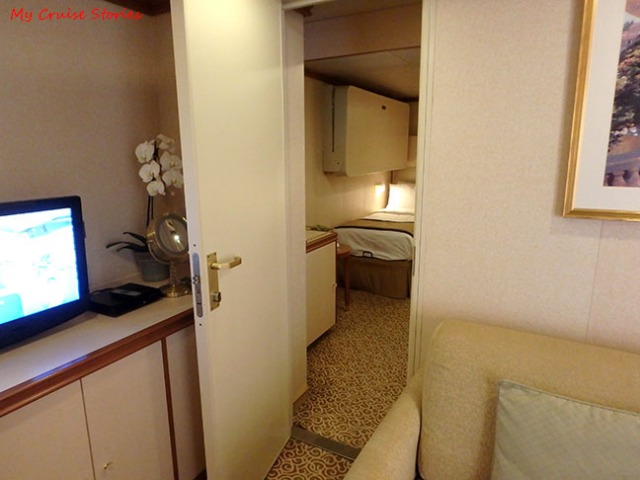 Ruby Princess has a couple family suites which have a full suite with sitting and sleeping areas plus a connecting door into an extra bedroom with beds, bunks, and another bathroom. 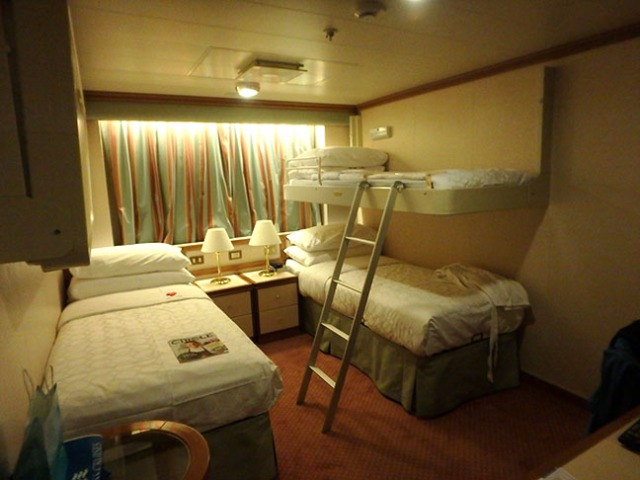 Try not to book a room that holds more people than you actually have in your group because the bunks are of the old style that fold down from the wall rather than the newer sort that fold down out of the ceiling so they stick out into the room somewhat even when folded up. 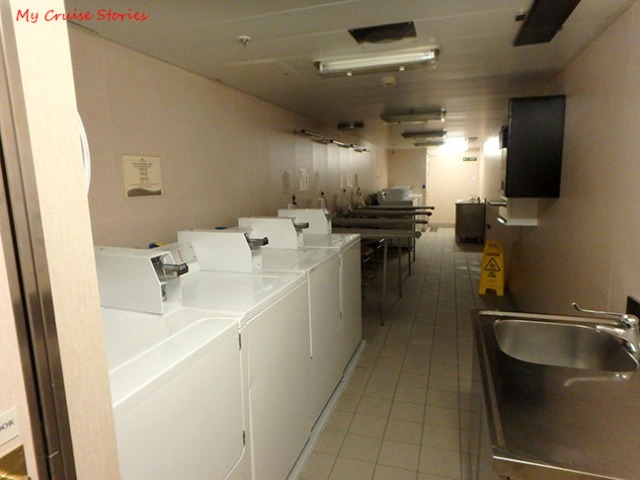 Decks with cabins all have launderettes, which cost $3 each for the washer and dryer. You can iron your clothes for free. Carpets running down the halls between passenger cabins have red boarders on the port side where all the even numbered cabins are and blue boarders on the starboard side with odd numbered cabins so knowing which way to turn from the elevator or stairs is quite easy. 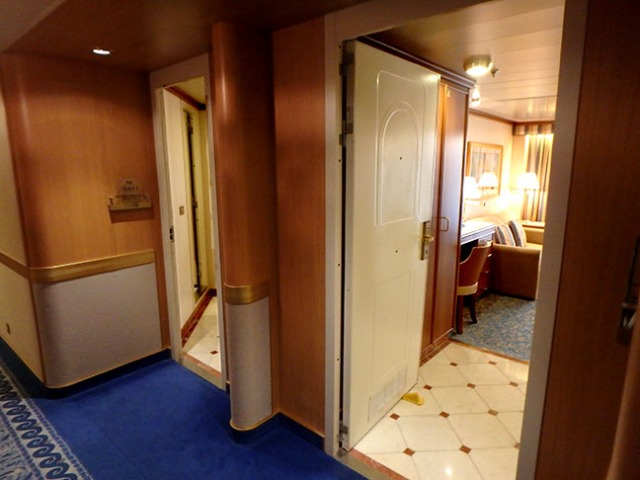 ADA (Americans with disabilities) cabins are available in all the basic categories – inside, oceanview, balcony, and suite. These cabins are usually the largest among each room type and feature wider doors and specially equipped bathrooms. 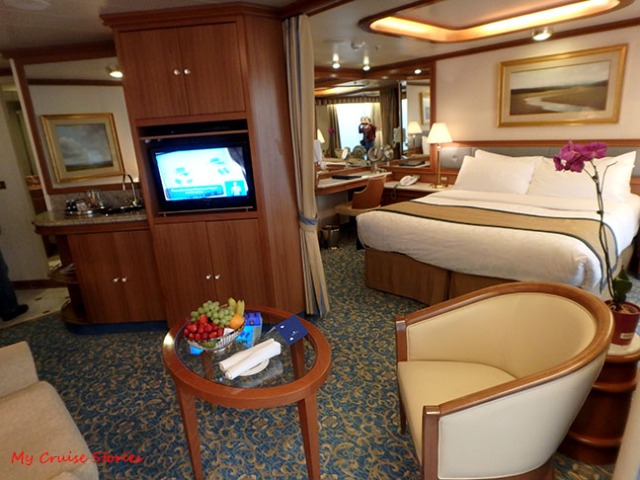 Within the basic categories, some split into more divisions – ocean view obstructed and ocean view, balcony and premium balcony, and numerous suite categories including mini suite, vista suite, penthouse suite, premium suite, family suite and owner’s suite. There are also sub categories within each category division where the price varies a bit due to the location of that particular room on the ship. In general on all ships and cruise lines, rooms on higher decks usually cost more, as do rooms toward the center of each deck. So usually the best price within each type of room is found near the bow or stern on the lowest deck where that type of room is available. Except of course the rooms actually on the stern, which are often premium balcony rooms with extra large balconies and a view of the ship’s wake.

For a complete list of blogs about cabins see My Cruise Stories Ships and Cabins page.

MyCruiseStories blog tells stories about adventures in cruising on ships big and small. Things to do onboard and in port. Anything connected to cruising. Also food, travel, recipes, towel animals, and the occasional random blog.
View all posts by LBcruiseshipblogger →
This entry was posted in Princess, Ruby Princess and tagged accommodations, cabins, cruise ship, laundry, photos, Princess Cruises, Ruby Princess, Staterooms, suite. Bookmark the permalink.