Posted on January 23, 2015 by LBcruiseshipblogger 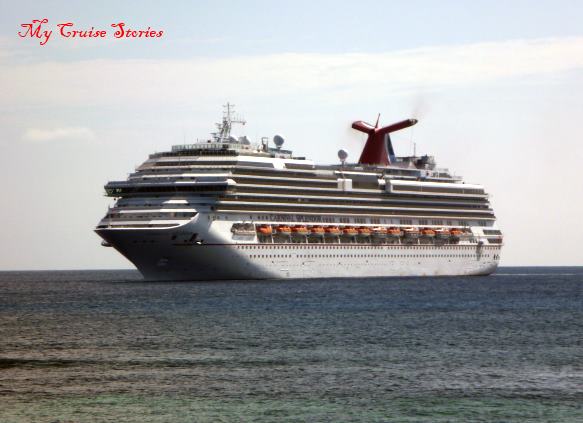 Like all cruise major cruise ships, Carnival Splendor has a range of passenger cabins to choose from depending on how much space people want vs. how much they want to pay.  Some passengers choose small interior cabins to save money while others would rather pay more for a bigger cabin with a private balcony or a spacious suite.  Officially they are called staterooms, but most cruise ship guests refer to their room on the ship as a cabin.

People who are sensitive to cigarette smoke may want to avoid booking deck 6, particularly midship where smoke from the casino on deck 5 sometimes wafts up the stairwell.  Aft rooms above a couple of the deck 5 lounges where smoking is allowed could be problematic as well.  Smoking is no longer allowed on balconies and other than the casino, the Cool Lounge, and the Red Carpet Nightclub it is only allowed outside on decks 10 and 11 starboard. 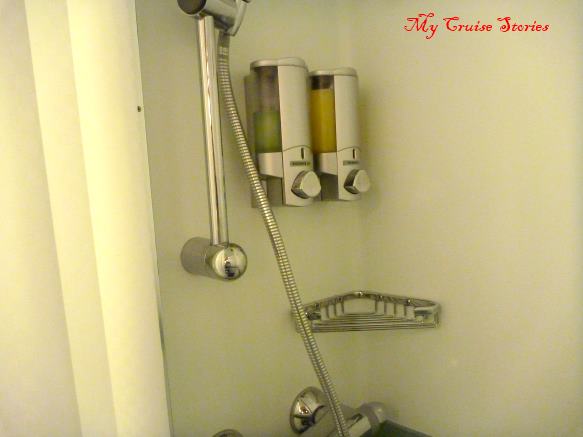 All cabins have shampoo and shower gel dispensers in the shower and bars of soap and a few product samples in a bowl on the counter.  What is in the sample bowls changes over time so the only things you can really count on having are the shampoo, shower gel, and soap.  Be sure to bring everything else you will need for the cruise.

If you want to decorate your cabin or door, or just want to keep paperwork organized, it’s good to know that cruise ship cabins are magnetic.  The walls, door, and ceiling are all magnetic.  We used magnets to keep our sail and sign cards handy on the wall next to the door so we didn’t have to look for them when we wanted to leave the room.

If you want to save money, book low.  An inside cabin on deck 1 may be the exact same size as an inside cabin on deck 9, but lower decks are in lower categories so it costs less.  Not all cabins in the same category are the same size though.  It pays to check the deck plans before booking not only to find the best staterooms in a particular category, but also to see if anything noisy that you want to avoid is above or below the room you want to book.  It’s also nice to room in the same area of the ship as the places you go to most.  Stairs and elevators are handy for the ups and downs, but it is a long walk from bow to stern.  Or pick a room far away from the things you like so you get more exercise.   If you have the option to choose category guarantee rather than a specific room you pay less, but take the room assigned to you which will be at least the category you selected, possibly higher depending on what rooms other people booked.

Staterooms at the bow of the ship on decks 6, 7, & 9 book as interior, but have windows.

Interior rooms are always at the low end of the price scale, but if you look carefully you can find rooms with a view that book as interior.  They won’t be in the lowest category of interior rooms, but will cost less than one listed as ocean view.  On the Splendor there are a few rooms with portholes on decks 1 and 2 and a row of rooms with windows across the bow on decks 6, 7, and 9 that book as interior rooms.  We spent a week in a cabin at the center of the bow on deck 7 where the panoramic view more than made up for the lack of space even if it could only be seen when standing due to the front wall of the outside deck blocking the lower half of the window.

not much space in the interior room with drop down bunks

If you just have two people cruising on a budget, an interior room is a great way to save money.  When staying in an interior cabin I tend to put the TV on the bow cam channel and use it like an electronic window.  For the most part the interior rooms are the smallest cabins on the ship so if you have more than two people in a room they can become quite crowded.  The interior cabin with drop down bunks has very little room to move around so unless you plan to do nothing but sleep in your cabin or just can’t afford the cruise any other way, with 3 or 4 people you would be much more comfortable in the more spacious ocean view cabin.

People tend to look down on cabins on low decks as inferior.  We stayed in an ocean view cabin on deck 1 with 4 people in the room on an 8 day cruise and loved it.  The ocean view cabin had quite a lot of space with a drop down bunk over a couch that converted to a bed.  We never felt crowded.  From deck 1 it is just 1 deck down to the gangway at port stops and just 2 decks up to the dining room at mealtimes so it is easy to avoid elevators at their most crowded times and just take the stairs.  The room had a good sized window with a nice close-up view of the water.  When the sea got a bit rough the lower deck had noticeably less movement than those higher up.

Balcony staterooms normally have a significant price jump from ocean view.  You get a great view and your own small outdoor space with a balcony cabin.  They also tend to have significantly more interior space than the typical inside room.  Most cruise ship passengers are quite comfortable in a balcony room.  For even more extra space without going up to suite price there are some staterooms with extended balconies and some premium balcony rooms.  The outer ends of the aft extended balconies on the stern can be seen from higher decks, so keep that in mind if you don’t want other passengers looking down on your balcony.  Then again the bridge crew can see down the rows of balconies along the sides of the ship from their docking wings so those aren’t entirely unobserved either.

If you want a really fantastic balcony, there are corner cabins at the stern on decks 6, 7,  & 8 with wrap-around balconies.  In some places you can book one of those and the room next door which has a double balcony as adjoining cabins and have an even bigger balcony with the partition between the two removed. 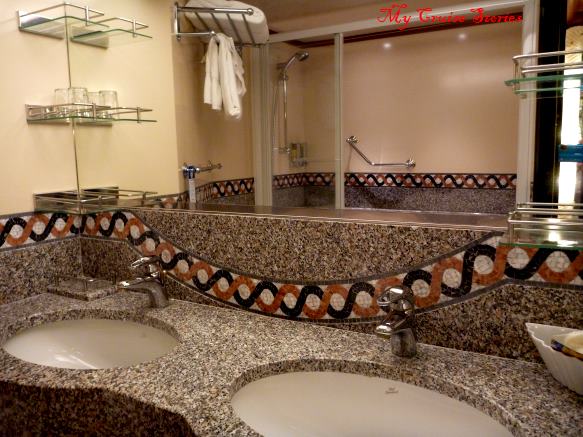 For those who want more luxury in a spacious cabin that has amenities like a dressing area, walk-in closet, and jetted tub, the ship has several categories of suites available ranging from the smallest junior suites to ocean suites to the largest of all, the grand suites.  Of course the price increases with each jump in category.  Suites come with added perks like VIP check-in. 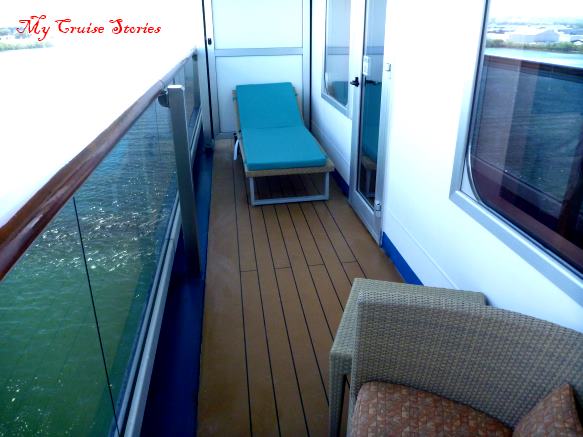 the balcony on the grand suite has fancy furniture

At the high end of each category we find the Spa cabins.  These cost more because in addition to being on a very high deck, they come with extra perks.

Each spa cabin has a number of little bottles of spa products on the counter, which are replenished throughout the cruise.  If you go to buy these products at the spa they are quite pricey.  Spa cabins also have different bathrobes and towels from the other cabins.  These cabins are mainly for spa enthusiasts since they also come with priority spa appointments and (in my opinion the best thing about them) free access to the mineral pool and thermal suite, which includes the heated ceramic chairs. 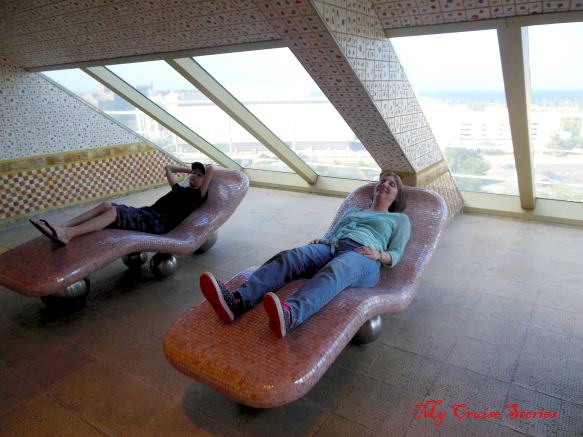 If you’ve never tried a heated ceramic chair, you have no idea what you are missing. Pure Bliss.

People who enjoy spas would love these cabins, but those who are not really into spas may not find the rooms worth the extra money.  If you’ve never sat on a heated ceramic chair, take the free spa tour on your next boarding day and try one out!

Wheelchair accessible cabins are often larger than other cabins in the same category to allow space for a wheelchair to move about the cabin.

They also include things like grab bars, shower seats, and accessible height furnishings and accessories. 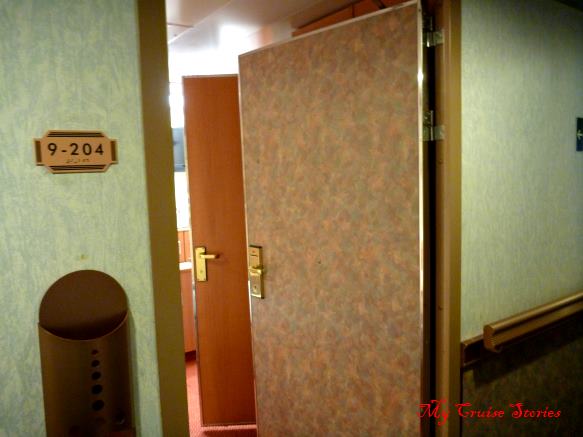 At just over three feet, the doors into wheelchair accessible staterooms are significantly wider than those into regular cabins which are under two feet wide.

double clotheslines – and longer too since the shower is bigger

Showers in the wheelchair accessible units are larger than normal and minus the lip to the shower stall found in regular cabins.  One of the best features of these showers is the clotheslines.  While normal cabins have small showers and one short clothesline, the accessible cabins have a much longer clothesline since the shower is bigger, plus it has one at the normal height and another lower down where a sitting person can reach it, giving about quadruple the space to hang things like wet swimming suits.

Click here for an in-depth look at an ocean view cabin.

To view cabins on other ships click the links below:

For a complete list of cabins on other ships see My Cruise Stories Ships and Cabins Page.

MyCruiseStories blog tells stories about adventures in cruising on ships big and small. Things to do onboard and in port. Anything connected to cruising. Also food, travel, recipes, towel animals, and the occasional random blog.
View all posts by LBcruiseshipblogger →
This entry was posted in Carnival, Shipboard Life, Splendor and tagged Accomodations, cabins, Carnival Splendor, cruise, cruise ship, inside cruise ship cabins, photos, Staterooms, travel. Bookmark the permalink.