Cozumel Beaches On Your Own – Sky Reef

Posted on June 27, 2016 by LBcruiseshipblogger

Ecstasy from Sky Reef in Cozumel

Cozumel is always one of my favorite ports. The beautiful aqua blue water in some areas stays so clear you can see the bottom even when fairly deep. The second largest coral reef in the world, the Meso American Reef, starts there and runs all the way to Honduras. Some of the area’s most popular activities include snorkeling and scuba diving. Lounging on beaches is also a popular pastime. From Cozumel you can take a ferry to Playa del Carmen on the mainland. On all our previous visits to Cozumel we did shore excursions from the ship. Each one different, but excellent. Two of them took us to the mainland. One visiting the Mayan ruins in Tulum and the other cave snorkeling. The others stayed on the island. We went snorkeling on Palancar Reef with a beach stop at Playa Mia. Another time we rode the Atlantis Submarine, a real submarine that submerges over 100 feet below the surface. Grand Cayman is the only other place I know of that has one, though many ports including Cozumel have semi-subs.

Sky Reef from under the beach umbrellas

On our port stop at Cozumel on Carnival Ecstasy we decided to take it easy and just go to a beach for shore snorkeling and relaxing. Cozumel has quite a few little places along the shore where people can hang out for a beach day. Most offer either ala carte or all-inclusive services with food and drinks. The one I’d heard mentioned most is Mr. Sanchos, but our cab driver said the snorkeling is better at Sky Reef. We went there instead and met some other people who said they had asked to go to the Money Bar and their driver told them this was a better place too so some of the cabbies are probably in cahoots with the place, or getting paid to bring people there. It worked out well for us because the snorkeling was pretty good for shore snorkeling and this place was probably a lot more quiet and peaceful and less crowded than the better known places. It’s a great place to go if you want a relaxing beach day with some snorkeling and you don’t want to spend too much money. Some places charge just to go there. Sky Reef did not and the cab fare was a few bucks less than to anywhere else.

Several rows of beach chairs with little tables and big umbrellas lined the beach in front of a double palapa topped building housing a bar and restaurant. A dock with stairs into the water led out to the beach, but if you go there be careful on the underwater stairs as they can get slippery. On the day of our visit floating seaweed covered the first few yards of water closest to shore, remnants of a recent hurricane. Workers from the place stayed busy clearing it out of the water while we were there, probably a thankless task for awhile as more likely floats in daily until everything clears up from the storm. Under and beyond the seaweed the water was clear. Cozumel normally has water so clear you can often see the bottom while out in a boat. Little fish swam in large schools near shore. Farther out the fish got bigger and the amount of fish smaller. Rocks and holes on the sea floor made structure where coral and fish concentrated.

I’ve used my trusty lumix underwater camera for years. This time I tried out my new Olympus camera underwater for the first time. I tried it on a few different settings throughout the trip and saw quite a difference in the photos depending on which setting I used. The ones that look better while taking the photo aren’t necessarily the ones that look clearest in the finished product. I didn’t go through any of the photos until I got home though so what I took through this set of cruises is what I get and I’ll have to experiment more with it next trip.

I could snorkel all day if limiting UV exposure wasn’t a necessity, but it is so I just stayed out for awhile and then made use of a shady beach chair and ordered a virgin mango daiquiri. The cab ride over was $13 for two people. If you have your own gear the snorkeling is free, but when spending a beach day in a place with no cover charge a person should buy something. They had snorkel gear for rent and massages available for a whole lot less than what the ship’s spa charges. 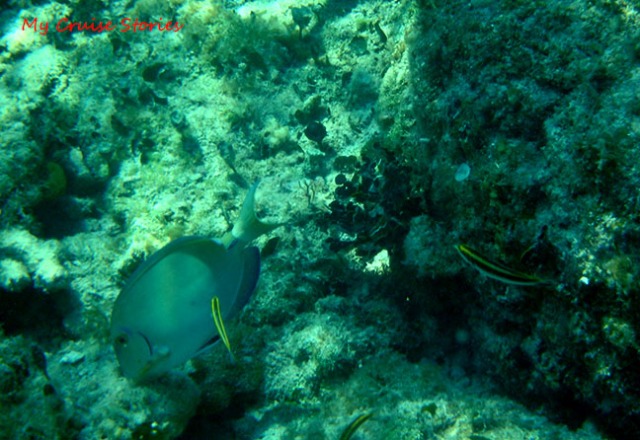 It was a nice place to spend the day. When we were ready to go they called a cab for us and while we waited we looked around the restaurant area a bit. Several people sat at tables eating Mexican food and at one end of the room two large parrots sat on a perch waiting for someone to pay for a picture with them. Along one side of the room a table displayed jewelry for sale. The cab ride back also cost $13, so overall a pretty cheap day on shore.

I found out recently that the oil in most sunscreens can kill coral. For this trip I tried mineral based coral safe sunscreen. You probably won’t find any among the major brands in the average store. If a sunscreen doesn’t say biodegradeable then it is not coral safe. You can google it and find places that sell them online. If you have a local store that sells things like herbal remedies or organic products they might have it too. These mineral based sunscreens actually protect you better from future skin cancer than the oil-based chemical sunscreens people normally use so you can do both your skin and the sea life a favor by finding a coral safe product before swimming in tropical oceans.

MyCruiseStories blog tells stories about adventures in cruising on ships big and small. Things to do onboard and in port. Anything connected to cruising. Also food, travel, recipes, towel animals, and the occasional random blog.
View all posts by LBcruiseshipblogger →
This entry was posted in Caribbean, Carnival, Ecstasy, Mexico, Ports of Call and tagged Cozumel, Cozumel Beach Bars, cruise, going ashore on your own, Mexico, snorkeling, things to do in Cozumel, travel, tropical beach, underwater photos. Bookmark the permalink.

2 Responses to Cozumel Beaches On Your Own – Sky Reef