Memories of a Cruise Ship Doctor Part 8 – Cruise or Bust

Posted on April 27, 2015 by LBcruiseshipblogger 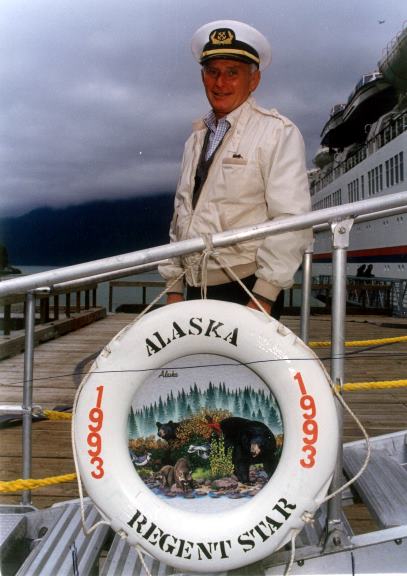 Cruise ship doctors see all kinds of things in the course of their job.  While most people sail healthy, a good number of passengers are old and anything can happen.  Dr. Len Kreisler documented some of his unusual and interesting experiences working as a cruise ship doctor for the Regent Lines in the chapter What Ship, What Cabin and Doctor Who? from his book ROLL THE DICE, PICK A DOC AND HOPE FOR THE BEST.  This is an excerpt from that chapter.

We were 3 hours out of Vancouver heading north along the inward passage on the Regent Star when I got an urgent call for one of the VIP cabins. I got my bag from medical and put in a call to have the nurse meet me at the cabin.  A familiar, unwelcome odor greeted me as a frantic woman, with a Russian accent, opened the cabin door.  The odor couldn’t be anything but melena (stool mixed with relatively stagnant blood).

I remembered my first encounter with that type of mess; as a medical student making rounds on a cancer ward.  Some things never leave you.  I also remember leaving that ward to privately throw up in the men’s room.  This time I wasn’t nauseous, and I wasn’t happy either.

I followed the woman to the cabin’s bathroom.  I pushed open the door and confirmed my nose’s diagnosis.  An extremely pale male sat on a bathroom floor covered with an inch thick layer of black, tarry, extremely smelly gook.  His face was soaked with perspiration as he leaned his head against the vanity.  I gathered all the towels I could reach and laid a path to the patient.  The nurse arrived, in shock.  I told her to get a stretcher, additional muscle power and to notify housekeeping.  I would later ask the Staff Captain for permission to open the cabin’s portholes for ventilation.

The man had come to the United States from St. Petersburg, Russia 8 years previously. He was a scientist, living in the San Francisco Bay area.  He had no personally significant past history.  However, one son had a history of bowel cancer at an early age.  I offered as much encouragement as possible while we extracted and transported the man down to medical.  His blood pressure was low; he was sweaty and he looked like bleached white laundry.  We started two intravenous limes.  His color improved within 45 minutes.  I examined him from top to bottom including a digital/rectal exam.  The wife was still in shock and prayer, as her husband tried to sit up.

“Whoa, we’re not done here,” I said as I eased him back on the examining table.  “I am sure you were bleeding from something in your stomach or intestine.  You will need tests to figure out exactly what caused the bleeding.  I’ve replaced your circulating volume with fluids which has helped bring your blood pressure back up.  I assume you have stopped bleeding for now, since your blood pressure, pulse and color have improved and appear stable.  Our first stop is Juneau, another 24 hours of sailing.  You could start to bleed again and it could be very serious…even fatal.  My first choice is to have the captain return to Vancouver and send you to the hospital.”

The heavy accented Russian frowned.  “What’s your next choice?”

“You could sign a release stating you understand the risks, and choose to go on to Juneau.  I will get laboratory tests in Juneau to assess your blood loss.  If you’ve lost 25% or more of your normal blood volume, I will insist you leave the ship and fly back to San Francisco.  If you have good residual blood readings and your vital signs remain stable, I will not insist on your leaving the ship…but you will have to sign another release.”

A broad smile came over his face.  His wife’s face was not so happy.  They had a heated exchange in Russian.  He won.  He made it clear (to me) that they’d planned this trip for many months; it was fully paid and he was going on come hell or high water.  We drew up the papers, watched him for another hour and let him go back to his cabin in a wheelchair.  I did put him on anti-acids and light sedation at night on the hunch that maybe his bleed was due to stomach ulcers?  I limited his physical activity and ordered a bland diet.  I again marveled at the resiliency of the human body, and this man’s stubborn resolve.  By that afternoon he was sitting on a chaise lounge on the pool deck…at least in the shade.  He smiled and told me not to worry.

His wife shrugged.  “You can’t tell him anything.”

His blood work in Juneau was border-line low.  He signed releases and completed the cruise to Seward.  I gave him copies of his medical record, advised immediate follow-up and requested he send me a note from San Francisco.

“Thank you, doctor, but I still have the two-week land portion of my vacation: Denali Park, a glacier and everything else.  Don’t worry, I’m doing fine.”

I never got a letter from him.  Every time someone says “don’t worry” I think of him. 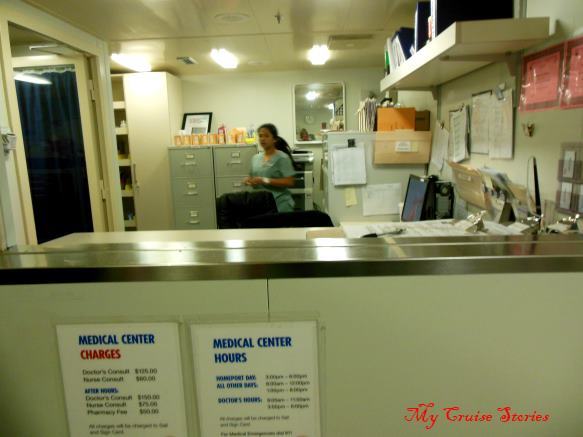 Check-in desk at the medical center on Carnival Splendor. It’s in a waiting room, which was full of people that I did not take photos of for their privacy.

Medical centers on modern ships are probably a lot nicer than what Dr. Len had on the Regent ships.  This photo is from Carnival Splendor, which had a very nice medical facility.  The waiting area was mostly full of crew.  They live on the ship for months at a time so the ship’s doctors are the only doctors they have while onboard.  Passengers are just on the ship for vacation and avoid visiting the ship’s doctor unless absolutely necessary.

MyCruiseStories blog tells stories about adventures in cruising on ships big and small. Things to do onboard and in port. Anything connected to cruising. Also food, travel, recipes, towel animals, and the occasional random blog.
View all posts by LBcruiseshipblogger →
This entry was posted in Guest Blogs, Shipboard Life and tagged bad cruise stories, cruise, cruise no matter what, cruise ship doctor, determination, number three. Bookmark the permalink.