Posted on April 21, 2015 by LBcruiseshipblogger

Princess of the Kayak

Wilderness Adventurer from the kayak

On an Un-Cruise voyage the main activities offered at any stop often include kayaking.  Once the Wilderness Adventurer anchors up, crew members lower the kayak launcher down to water level and line kayaks up in the slots.  Not just any kayaks, these are all top of the line Necky kayaks.  Passengers can climb into the kayak on a totally dry platform and once inside the crew pushes the small craft out into the water.  When finished passengers paddle back to the platform where the crew pulls their boat onto the kayak dock and they can get out with solid ground on either side.  Very easy to get in and out and no possibility of capsizing the kayak while doing so.  They also have stand-up paddle boards available for any guests who wish to use them.

Just 6 weeks before our cruise while running with my dog she noticed the neighbor dog outside of his fence and suddenly lunged in front of me, launching me into the air where I went flying over her back before landing on the paved road.  The dog was not only uninjured by this event, but completely oblivious to the fact that while in the air I put out my hand to break the fall and ended up with my arm broken inside the elbow joint.  A rare sort of break my orthopedist said he had seen only 3 of in a 30 year career – and he was a bone specialist.  Because the break was in the joint rather than a solid unmoving part of the bone he never put a cast on it.  In the beginning it had a tightly wrapped splint, which allowed no movement at all.  About 4 weeks after the break I started physical therapy.  The first session mainly consisted of the therapist showing me ways to cope without much use of that arm since at that time unwrapping the splint caused me major dizzyness on the verge of passing out and neither she nor the doctor had very high hopes for me.  She wrapped it more loosely than the doctor though, and the slight bit of movement that allowed made it possible to remove the splint and still stay vertical the next week.  Just before the cruise the splint came off for good, but both the doctor and therapist forbade any kayak paddling when I mentioned the upcoming trip. 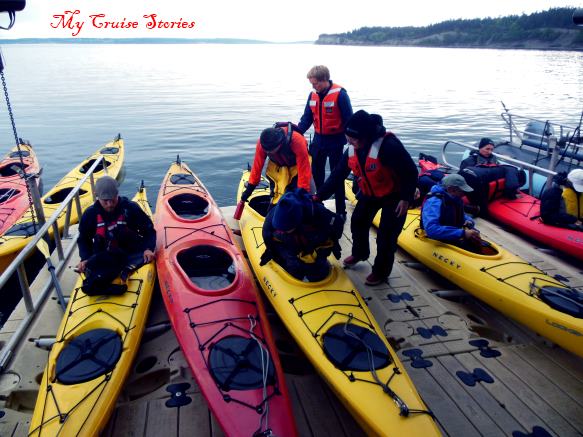 passengers getting into kayaks

Without the splint screaming out I’m injured to anyone who saw me, my arm looked perfectly normal to the unknowing onlooker.  It doesn’t bend or straighten completely or have full range of motion, but other people can’t see any of that.  While getting on and off skiffs I kept the arm tucked in front of me and didn’t allow the well-meaning crew to take hold of my left arm or hand to assist in transferring from one boat to another as it was still in a very fragile state at that time.

crew pushes the kayak out into the water

Because of my arm for the most part we opted for hikes in the places we visited, but we wanted to get out in a kayak at least once.  We would have gone on a guided paddle tour, but were told we would never keep up with the group with just one person paddling and the other one dead weight in the boat.  Just sitting there looking lazy is not my style, but I had no choice.  A bag of rocks would have been as useful as me – maybe more so since it might make a good anchor.  Paddling around on your own near the ship is an option for kayakers so we did that.  Unknowing other passengers had a tendency to hang over the ship’s railing yelling “you forgot your paddle” as we went by, probably thinking they were being funny.

kayaks filled with people who can actually paddle them

Maybe that is a small taste of what it feels like to be a princess.  Just sit there and try to look regal (something I would fail miserably at I’m afraid) while someone else does all the work.  Except people would be too busy trying to get a glimpse or a photo of a princess to say anything about her not paddling – and probably wouldn’t expect her to anyway.   I guess I should have tried to perfect the parade wave so when anyone said something about my lack of a paddle I could just smile and wave with my good arm like I was passing by in a float rather than floating past.  At least the one arm would have gotten some exercise that way.

crew pulling the kayak back on board

We (or should I say he) paddled off to the shore of a nearby island.  Often times when we’ve kayaked before I’d paddle while he took videos.  I’ve rarely been the non-paddler before even for short periods and never for the whole ride so it felt a bit awkward just sitting there doing nothing other than taking a few pictures while he did all the work. 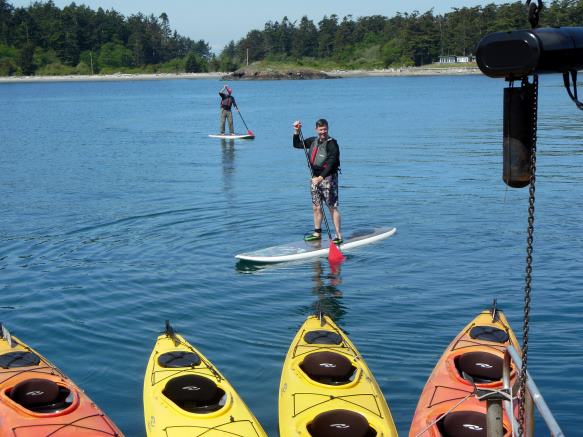 I rather liked the quiet near the island and would have liked to stay awhile, but he spied someone on a paddle board near the ship and off we went.  When you haven’t got a paddle you have no say in where you go….wait a minute a real princess could tell her lackey to paddle her wherever she wanted.  “No you can’t go on a paddle board, just paddle me around out here” might work for a princess, but for me it would not have gone over too well.

kayaks on a guided paddle tour

Later in the trip the ship spent a stormy night sheltering near a state park at Stuart Island.  The morning brought sunshine and to take advantage of our unscheduled location the crew offered several water activities – kayaks, skiff tours or paddle boards.  John took the opportunity to go out on a group paddle tour with a guide and other passengers from the ship while I stayed on the boat and had a wonderfully luxurious massage from the onboard masseuse and some hot tub time.   Now that sounds like a princessy thing to do!  Cheapskate that I am I’ve never spent money on a massage before, but now that I’ve tried it I highly recommend pampering yourself with a nice massage on your next cruise.  It’s a real bargain on the Wilderness Adventurer compared to massage prices on the big ships.  You get a whole hour with the massage tailored to your needs or desires.

MyCruiseStories blog tells stories about adventures in cruising on ships big and small. Things to do onboard and in port. Anything connected to cruising. Also food, travel, recipes, towel animals, and the occasional random blog.
View all posts by LBcruiseshipblogger →
This entry was posted in Shipboard Life, Un-Cruise Adventures, Washington, Wilderness Adventurer and tagged adventure cruise, broken arm, cruising with physical limitations, kayak, photos, travel, unseen injuries. Bookmark the permalink.

9 Responses to Princess of the Kayak