Posted on November 27, 2020 by LBcruiseshipblogger 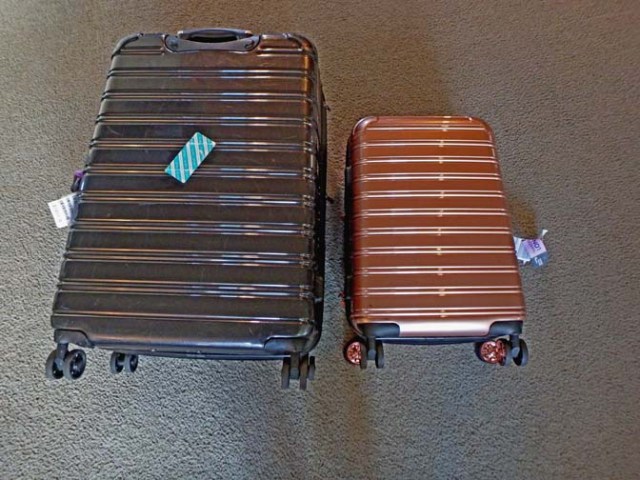 I’ve always been partial to soft-sided luggage and resisted buying any of the hard-sided sort. My husband has had a big iFly bag for several years now, and loves it. After much online research on the best bags to get at an affordable price, my daughter bought a 3-piece set of iFLY a year ago on her last trip to the USA, to replace the falling-apart set of soft-sided luggage she arrived with. She loves her iFLY too. Meanwhile up until my most recent cruise I kept to the soft-sided luggage, though I did go with a higher quality medium sized bag on my last purchase as I was tired of replacing the cheap bags that either start coming apart or have wheel issues after a couple flights.

platform at Zurich train station – some of these stations are vast, like a giant shopping mall with trains

We knew we would put a lot of miles on our luggage on our most recent trip as we had quite a lot of train travel planned before the cruise. Because of all the train travel I just wanted to bring a small bag. Since we were traveling through Europe I also wanted one that would be at least somewhat secure. I did have a small bag in good shape, but that’s mainly due to not much use, and it has a couple external pockets so besides the wheels not likely holding up it was also not the best one for use in the vicinity of pickpockets and thieves. Although as it turned out the areas of Europe where we went did not seem to have such a problem with that as some of the more heavily traveled places.

iFLY is easy to lock. There’s just one central zipping area with zippers from each end that come together with a built-in spot for placing a lock.

Mainly because of having just the one central zipper and no external pockets as well as the hard shell and good wheels, I went with the iFLY carry-on size this time. While my daughter had found a great deal online for the 3-piece set, for just the one bag I wanted it was cheaper to buy it at the store. They had black and rose gold. While I’m not fond of rose gold, when you go to pick up luggage in baggage claim, the majority of bags are black so for ease of finding my bag amongst the sea of luggage on the carousel I got the rose gold. I also got a set of two tiny locks, one for my new theft-proof backpack and the other for the suitcase, though as it turned out we did not run into any problems with possible thieves on this trip. We did run into someone on the ship who said they had very few clothes for the cruise and no electronics as they had left their luggage unattended in the trunk of a car for a minute or two in the process of checking into a hotel and it vanished. Obviously not everyone had as good of luck as we did in avoiding thieves, though in that case it wouldn’t matter what sort of luggage or locks the victims had since the thieves took their entire bags rather than just getting into them when the people weren’t paying attention.

inside the iFLY bag

Inside the iFLY bags have two main compartments, one for each half of the bag. One side has a zipping flap that encloses everything packed into that side of the bag securely under the flap. The flap has a pocket in it too so anything put there can be both separated from either main half and easy to get to.  The other side has straps that will hold things like clothes in place. It also has a small pocket hanging along the long inside edge. 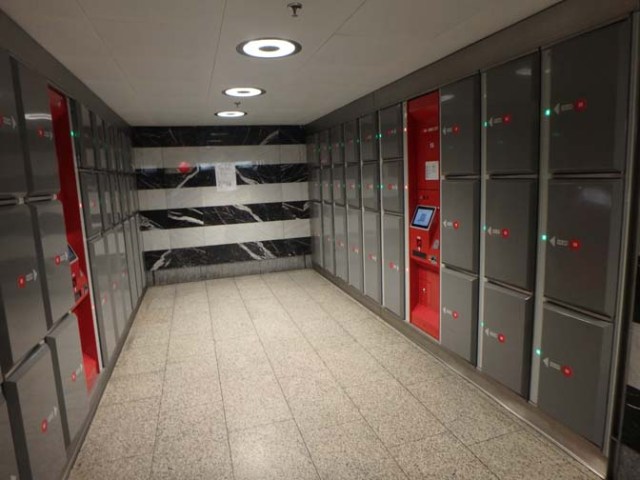 I’ve had bags in the past that went from looking brand-new to filthy and ancient in one flight. I’ve also had bags that went onto a plane intact and came off barely hanging together. One so badly damaged that I had to have it plastic-wrapped between flights to hold it together or there would be nothing left in it by the time we got home. Another one went from rolling along just fine to having a wheel so bent it wouldn’t roll at all in the distance between disembarking a ship and the taxi stand. Granted there was a long walk through the port building and another long walk outside at that port, but a decent bag should still be rolling regardless of the distance.

Our iFLY bags definitely got put to the test this trip. My husband’s several years old bag held up just as well as my brand-new one. In fact by looking at it you can’t even tell it’s been used at all other than a few scratches. Cleanliness is another advantage of the hard-sided bag. His being black it doesn’t show the dirt anyway, and the smudge mine came off a plane with wiped away easily rather than putting a permanent stain on it as airplane dirt has with bags I’ve had in the past.

We really put the wheels to the test. We took a bunch of different trains touring around Europe between landing in Switzerland on the plane and boarding the ship in Italy. Small bags are definitely the way to go when traveling by train. My bag fit into the overhead luggage rack on all but one of the trains we took. John’s big bag only fit in the overhead rack on one train. While large bags are fine when going straight from airplane to ship, if we were to travel around by train again he said he’d get a small iFLY bag like mine next time. Some of the trains had room for him to just have his big bag by the seats, but that only works when there are empty seats. The one train where the luggage racks were only big enough for backpacks had racks by the doors so both bags went there. Not the best situation since it would be fairly easy for anyone getting off the train to take someone else’s bag with them from that rack, but that train was too crowded to keep bags by the seats and luckily nobody bothered them. We did put the more important things in our backpacks so if anybody did take the bags they would just get clothes and shoes –  no computers, tablets or really essential things like passports and credit cards.

At some train stations we wheeled the bags for quite a long distance getting to our platform. The distances they went at train stations or airports was nothing compared to how far we went between the train stations and lodgings though. Between all the different places where we stayed we put several miles on them, and the wheels aren’t worn at all. We also had to go about a kilometer in the rain to get to the train station one morning, so the hard-sided luggage was a bonus for keeping clothes dry there. 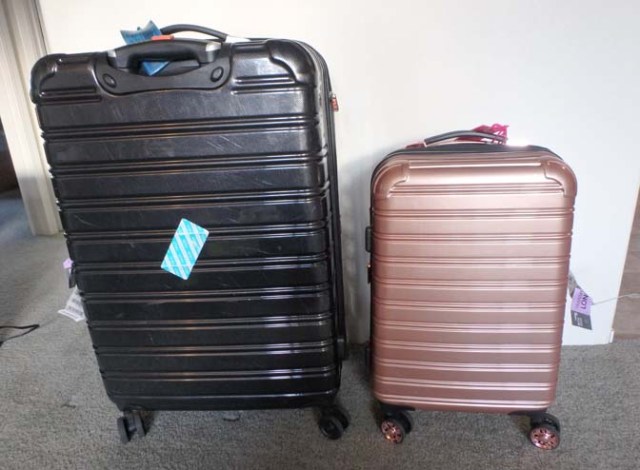 For anyone looking for durable affordable luggage where both the bag and wheels hold up under heavy use, iFLY is definitely a good choice. If I had planned on doing a review I’d have taken some photos of my bag when it was new and unused, but since I only decided to write the review after the trip because I liked the bag it was already used before I took any.

MyCruiseStories blog tells stories about adventures in cruising on ships big and small. Things to do onboard and in port. Anything connected to cruising. Also food, travel, recipes, towel animals, and the occasional random blog.
View all posts by LBcruiseshipblogger →
This entry was posted in Product Reviews and tagged iFLY, luggage, photos, travel. Bookmark the permalink.