28 Days on a Cruise Ship with No Guest Laundry

Posted on November 20, 2020 by LBcruiseshipblogger

All the major cruise ships have a variety of cabin selections and plenty of food. Beyond that amenities vary greatly from one line to another, and even among ships of the same cruise line. Some lines provide self-serve passenger laundries on all their ships, some don’t have them on any. Holland America has them on some ships (like the Veendam), but not others (like the Westerdam). The best ship we’ve ever sailed on as far as guest laundries go was P&O Arcadia, where they were not only available, but free to use. All the other ships we’ve been on that had guest laundries charged something each for the washer and dryer, though the cost varied. Originally they were all coin-operated, but as time goes on newer ships or those who replace the equipment change it to paying with the same ship card people use to open their cabin door or make purchases in the shops, bars, or anywhere else on board. We took a 28-day cruise on the Westerdam from Vancouver to Shanghai, and would definitely have appreciated a guest laundry on that cruise if the ship had one. Unfortunately it didn’t.

It’s easy to pack enough clothes to sail for a week without washing any clothes, but what do people do on longer cruises? If the ship has guest laundries of course that’s easy – they wash them. If not, there are other options. People high enough in the loyalty program often get free laundry service, but on some lines that requires a lot of past cruises. On Holland America for instance you have to get to 4 stars, which takes 200 cruise day credits before your benefits include laundry service. Free laundry service often comes as a perk for those who book suites, but not everyone can afford those. There’s always the option to use the bag provided in the cabin to send your things out to the crew for laundry service, but the price is usually steep, sometimes so much so that you could just about buy new clothes for what it costs to have the crew wash them for you. Although even at that paying for laundry service is still far cheaper than the price difference between a stateroom and a suite. 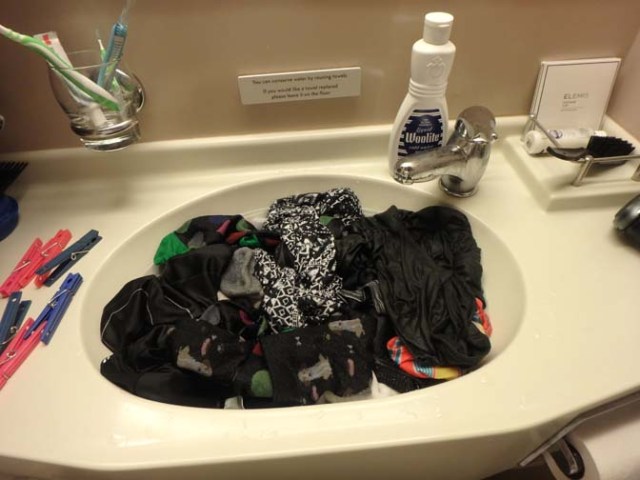 sink full of laundry on the Westerdam

That pretty much leaves hand washing in the cabin for anyone on a budget. One advantage on the Westerdam was that anything above an inside cabin comes with a tub rather than a shower. This is useful for hand washing clothes because a tub gives a lot more hanging space than a shower. You could even use it to wash the clothes in if you wanted, though I do the handwashing in the sink. It doesn’t hold as many, but then the amount you can wash at one time is limited to the amount of space you have to hang them to dry anyway.

laundry hanging on lines tied to metal fixtures on the tub

Cruise ship showers or tubs come equipped with a clothes line you can pull across and hook to the other side, which is great for hanging wet swimming suits or just a few laundry items, but not sufficient for much else. Luckily there are always places to tie things to if you come prepared. I’ve used just a plain clothesline rope and clothes pins in the past. This cruise I had a travel line that had clips attached already, but I supplemented those with clothespins because it didn’t have enough clips, and I also used clothespins on the line the ship provides. Clothespins often come in handy when traveling even if all you need to hang is a wet swimsuit. The sort of travel line with suction cups would come in useful as you would not need to tie it to anything, though its hanging distance is limited by the length of the shower or tub where the sort you tie can wind around giving more hanging space. Having both would be ideal to maximize the amount of hanging space and use areas where there is nowhere to tie a line to, which would help keep the wet clothes more separated – and separation helps them dry faster. 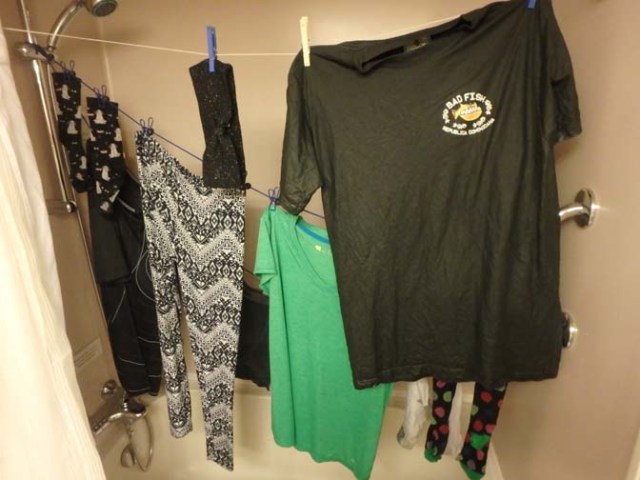 Cruise ship bathrooms don’t tend to have a lot of airflow, so the clothes dry a whole lot faster if you keep the bathroom door open. Some things will dry overnight and most will dry within a full 24 hour day so long as the door stays open. Stewards tend to shut it whenever they clean the room though, so you have to open it when you get back. Once things stop dripping they can move to hangers. Usually there’s a spare towel shelf with a bar under it they can hang from. Things like thick socks or heavy jeans may take an extra day so that’s a good place to put them to finish drying, or to hang swimsuits when you get back from the pool or hot tub if the line is full of laundry. Even if you aren’t washing clothes and the only thing you hang to dry is a swimming suit it will still dry better in a cruise ship bathroom if you leave the door open.

view of laundry lines from above

I’ve found that I can actually pack less clothes for a long cruise with no launderettes when I’m planning to wash things by hand than what I need for a shorter one where I won’t do any laundry or a long one that has guest laundries where I won’t need to wash clothes as often. Since there isn’t that much space to hang things if you wash clothes every day or two you don’t need enough clothes to last a whole week like you would for a shorter cruise or a long cruise where you can wash and dry a whole load at a time. Which is useful if you want to pack light to save on airline luggage fees. It does limit your wardrobe options so you don’t have a whole lot to choose from in what to wear each day though.

My essentials for doing laundry in the cabin are a bottle of the sort of laundry soap intended for handwashing, clothes pins, and clothes line. Batch size of clothes that can be washed at once depends completely on hanging space, which varies from ship to ship depending on the size of the tub or shower as well as the amount of clothesline and clothespins you have available – and whether or not there is somewhere to hang the clothesline. It doesn’t help to bring a lot of line if you only have space to hang a little. Don’t count on using balcony space to hang clothesline as most ships don’t allow laundry hanging on balconies. It’s a safety thing. Ever since someone threw a cigarette butt off their cruise ship balcony and it landed in laundry hanging on the balcony below and started a fire most ships stopped allowing anyone to hang things on the balcony or to smoke there.

Once your things are washed and hanging, wringing them out frequently will help them dry faster. Wring them out until they stop dripping. After awhile water works its way to the bottom of the garment and they start dripping again so they are ready for another wring. This is especially useful for things like socks that may otherwise take a long time to dry and don’t tend to wrinkle easily (and if they do it really doesn’t matter since putting them on would stretch the wrinkles out anyway.) Not so useful for clothing likely to wrinkle because the more you wring it the more wrinkles it will get and ships without guest laundries aren’t that likely to have irons available either. It does help some if you fluff the clothing up and smooth out all the wrinkles after you wring it out, and if you wring by rolling rather than squeezing the item. 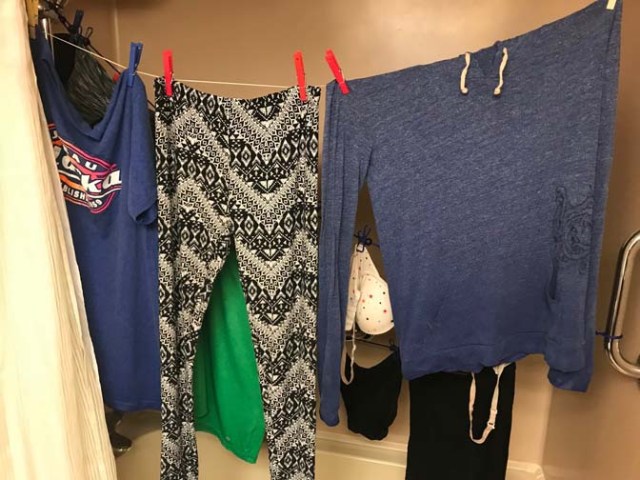 sometimes there is a lot of laundry crowding the line

If you’re ready to wash more things and some are still damp, but long done dripping they can move to hangers dangling from the towel rack or even into the closet if you have enough room there to hang things with some space between them and any other item so they get some airflow and to keep them from getting anything else damp. If you don’t mind clothes hanging in the middle of the room they’ll dry fastest hanging from the heater/air conditioner, which is usually a ceiling vent. Of course they would have to be well past the dripping stage and just finishing off a damp item for that because wet things dripping onto a carpeted floor is a very bad idea.

Handwashing in the cabin on a long cruise is something you have to keep up on throughout the cruise, but it does save a lot of money over sending clothes out for the crew to wash. You can cut down on the amount of laundry by wearing things more than once if they did not get dirty, sweaty, or spilled on. Often something just gets worn for a couple hours to dinner or some other onboard event so it doesn’t really need washing every time. Unlike gym clothes or something you sweated in all day on shore, which does need washing after each use.

MyCruiseStories blog tells stories about adventures in cruising on ships big and small. Things to do onboard and in port. Anything connected to cruising. Also food, travel, recipes, towel animals, and the occasional random blog.
View all posts by LBcruiseshipblogger →
This entry was posted in Holland America, Shipboard Life, Westerdam and tagged #nolaundryonacruiseship, cruise, doing laundry on a ship without guest laundries, doing your laundry on a cruise, Holland America, photos, travel, Westerdam. Bookmark the permalink.