Posted on March 24, 2017 by LBcruiseshipblogger

Cozumel has no shortage of things to do when cruise ships come to port.  We’ve stopped there on quite a few cruises and always found something different to do.  This Mexican island has much more to offer that we haven’t yet done, not only in Cozumel itself, but at Chankanaab Park.  The park has more to do within its boarders then most people could fit in within one day.

On our last visit to Cozumel we took a lazy beach day at Sky Reef.  As the taxi passed Chankanaab on the way there the driver mentioned that it only cost $25 to get into the park so we decided to try it out on our next visit on the Carnival Breeze. The cab ride there cost just $12 for two people (a bit more because we always tip.) The basic entry fee cost just $21 rather than the $25 the taxi driver said. For more money we could have added on extra things, but there is a lot to do with just the basic entry fee.

Once inside the park you can walk around and look at things, go to the sea lion show, or wander through the botanical gardens and look at crocodiles, replicas of Mayan ruins and a replica Mayan village. 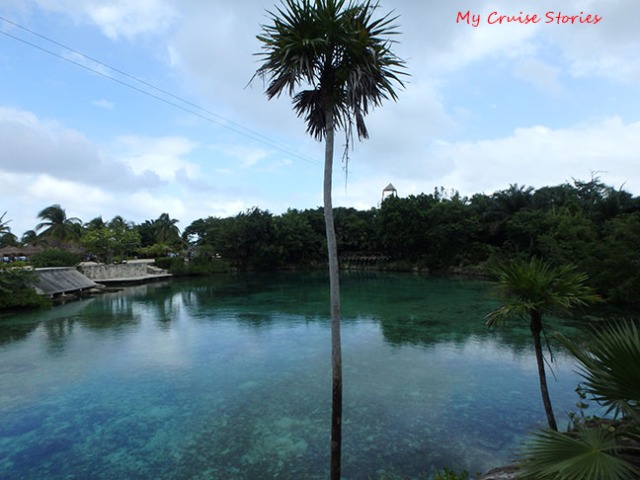 Several different areas throughout the park have a view of the large saltwater lagoon the Mayans called Chankaanab meaning small sea which gives the park its name.

The sea lion show is included with the basic entry fee. Trained sea lions perform with each one doing different tricks.

The park has a big beach with lots of beach chairs under palaypas and a few hammocks hanging in trees. Stairways lead into the snorkeling area, which is free to use if you have your own gear.  If not they have rental gear available. A sign by the stairway said snorkel vests are required for children so for once I could snorkel freely without my arch-nemesis, the dreaded snorkel vest. (It is easier to float on the surface of salt water than it is to dive underneath it and even uninflated snorkel vests are annoying, but many places require them on everyone.) 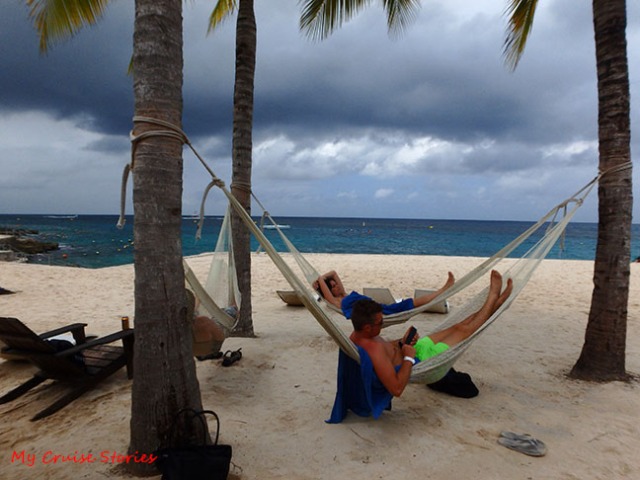 hammocks at the beach

The water at the bottom of the stairs is already pretty deep so the snorkel area isn’t really suitable for small children unless they can swim at least well enough to control where they go with the snorkel vest keeping them afloat. It’s also open to waves and currents if it’s not a calm day for the sea. There is a little inlet with a nice sandy beach near the dolphin area where kids can wade or swim in shallow water more protected from waves. There’s also a pool in the park. Lockers are available for rent near the inlet and by the dive shacks on the beach.

Rock formations line the beach in the snorkel area, but a series of stairways provide access to the water. There’s not much to see right by the shore other than a few small fish, but out a bit from shore there are reefs and lots of fish. Some of the bigger fish will follow snorkelers around and a lot of them will swim close by. There’s a raft thing anchored  off the shore for people to climb up on if they want out of the water for awhile.

here some fish swim to you instead of away

I saw a bright blue fish, a lighter blue fish chasing another fish around, several schools of fish bunched up like a bait ball, and lots of other fish swimming around. Most of the action took place near a tall reef, probably anchored on a large rock. Larger fish swam mainly above the reefs.

lots of fish hung around this reef at Chankanaab

The park had many other things people could do if they wanted to spend more money. A lot of things cost $60. They had a zip line, a sea trek in underwater helmets, clear bottomed kayaks, dolphin swim or encounter, and manatees. Food and souvenirs cost extra of course, but the restrooms and showers are free. There’s also a natural spa and a tequila museum and tasting area.

Like Cozumel itself, this park could keep you coming back to try different things. Sometimes really different things like the human sphere which somewhat resembles a giant hamster ball. It even has an underwater cave open to certified divers.

flowers in the garden

MyCruiseStories blog tells stories about adventures in cruising on ships big and small. Things to do onboard and in port. Anything connected to cruising. Also food, travel, recipes, towel animals, and the occasional random blog.
View all posts by LBcruiseshipblogger →
This entry was posted in Breeze, Caribbean, Carnival, Mexico, Ports of Call and tagged Breeze, Carnival, Chankanaab, Cozumel, Cozumel on your own, Mexico, photos, sea lion, snorkel, video. Bookmark the permalink.

4 Responses to Chankanaab Park in Cozumel