Posted on April 22, 2016 by LBcruiseshipblogger

Splendor next to the Ecstasy in Cozumel

A lot of ports have excursions offered on semi-subs, but not many offer the rare opportunity to dive to the depths on a real genuine submarine.

When choosing something to do on the Carnival Splendor’s stop in Cozumel – which has a lot of excellent shore excursions available to chose from – I noticed one that said it was a submarine. We met some friends on a cruise with a different cruise line who had found an excursion that said it dove to depths of 100 feet, but was also listed as a semi-sub.  Whether intentionally misleading or poorly worded meaning views to depths of 100 feet they never knew, but they felt quite disappointed when it did not dive at all. We recently took a semi-sub tour at Grand Turk and enjoyed it quite a lot, but we also knew it was a semi-sub and did not expect it to dive since a semi-sub is actually a boat with an underwater viewing chamber rather than a real submarine. 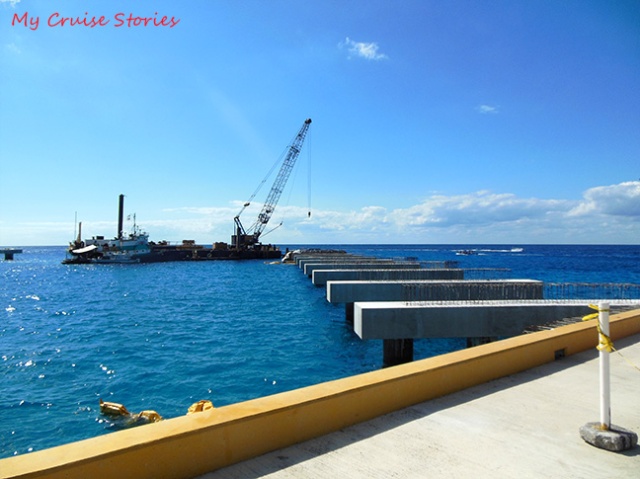 construction at the dock

Nowhere in the title or description of this excursion did the word semi appear so we booked it hoping to get a real submarine, but always a bit doubtful because of what happened to our friends. The day finally came when our ship docked at Carnival’s private pier in Cozumel. We noticed construction on one side of the pier. Carnival was expanding their dock to hold more than two ships at the same time.

At the meeting point for excursions the person holding the sign for Atlantis Submarine said yes, it truly is a real submarine. Once they gathered all the people up who had booked the excursion they led everyone to the dock where excursion boats, tenders, and the ferry to the mainland go. There we boarded a tender that took us out to the waiting submarine at Chankanaab reef. On the way there one of the guides said Chankanaab means “little ocean in the land” in Mayan. Nearby Chankanaab park has a salt water lagoon with underground access to the sea so though it looks like a lake it is actually salt water. 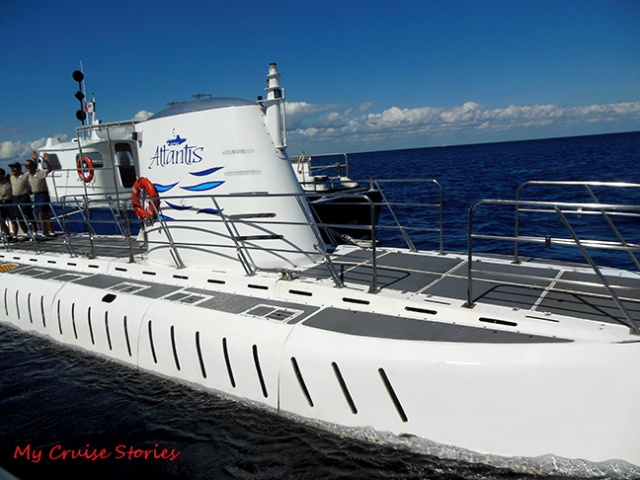 The tender tied up to the sub, which had another boat tied to its other side. They said the other boat tows the sub out to the reef each morning and back to the dock at night when it finishes working for the day. A support boat stays with the sub whenever it submerges. So far they have never had any problems or needed to use any of the rescue gear they showed us on the way there. They had two different kinds of life jackets. One for the tender and the other for the sub and a gas mask in case of any sort of issues with the air inside the sub while submerged. 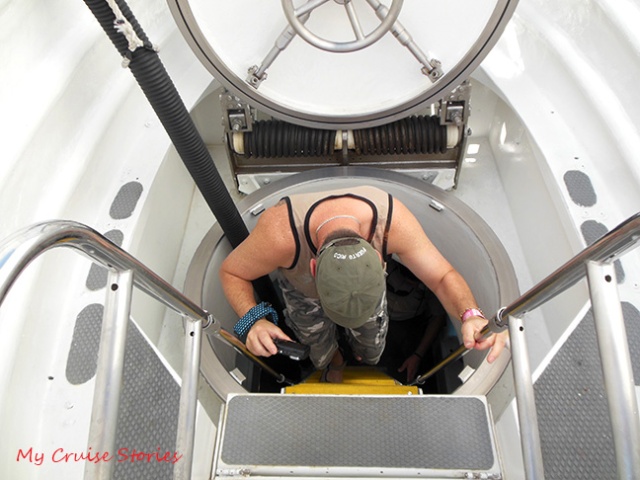 down the hatch – the way in and out of the sub

Our group had just enough people to fill half of the sub, so they had everyone sit on the same side so that they would not have to go by everything twice to show it to each side. This gave us time to see more places than they normally go.

The interior looked similar to the semi-sub with a long bench down the center and porthole windows down both sides, though the bench seat had sort of portioned areas and no cushion and the windows were smaller. Once everyone got settled they closed the hatch and untied the submarine from the support vessel. Through the windows we could see the boat’s hull and propellers. A red LED display on the wall showed the submarine’s depth. Bubbles floated past the windows as it descended. The water around Cozumel is so clear sometimes even from the surface you can see all the way to the bottom.

what to see at the bottom of the sea

At around 50-60 feet down the sub started sailing around near the reef. Several types of coral, lots of fish, and a variety of sea sponges dominated the view. Now and then some people saw a conch or a lobster. The sub did not shine lights on anything. With the clear blue water and the white sand reflecting light from above the water never got dark even at the bottom. Most colors disappear once you get deep and mostly things looked blue, but even snorkeling in much shallower water the Caribbean coral does not have the sort of colors found on Australia’s Great Barrier Reef.

The sub continued down deeper following the bottom of the sea as it approached a drop-off at the island’s end. It went to a depth of 129 feet, staying near the bottom of the reef. The sea dropped to a depth of about 2000 feet beyond the reef, far deeper than the sub could go. They said its max depth with passengers was 150 feet and without them it could do a bit over 200. There is no other submarine like it in Mexico, though Atlantis has another at Grand Cayman. 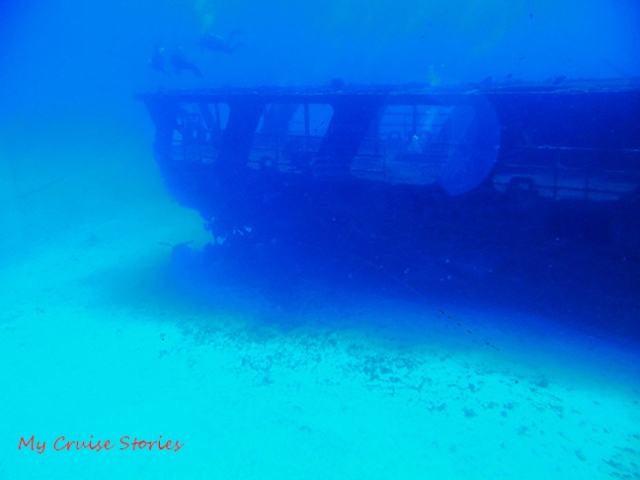 boat and divers under the sea

Since it took less time to travel the usual route while only needing to let one side of the sub view things they went to a sunken ship where the sub doesn’t normally go. It was once a minesweeper for the US navy, then given to Mexico where their military used it for a time before sinking it to form an artificial reef. Bubbles rose from the wreck due to scuba divers inside. We saw some other divers near the wreck, who probably got quite a surprise to see a submarine go by.

When our time under the sea ran out the submarine resurfaced and tied back up to the boats. Once the hatch opened everyone got back on the tender and returned to the dock. So now we know, Atlantis submarines really are actual submarines that dive down to 100 feet or more below the surface.

Back on the dock we saw another Carnival ship approaching. Eventually it got close enough to see the name painted on the side, Ecstasy. A smaller ship than the Splendor, but with a much taller funnel so though the top deck was significantly lower than Splendor’s, the funnel stood nearly as high. It was a slow day for Cozumel though as both the other piers where ships from other cruise lines go stood empty. 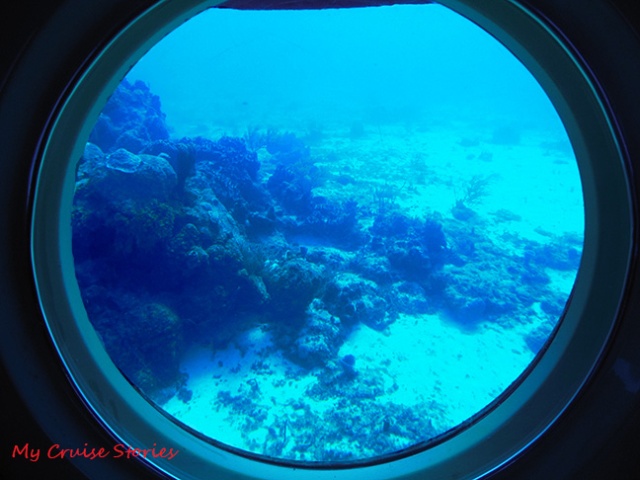 We love Cozumel. There is so much to do there. We do something different every time we go. Here’s some other excursions we’ve done in Cozumel:  Tulum Mayan Ruins, Cave Snorkel, Palancar Reef Snorkel and Playa Mia. If you’d like to know more about the island in general, here’s a blog about Cozumel.

MyCruiseStories blog tells stories about adventures in cruising on ships big and small. Things to do onboard and in port. Anything connected to cruising. Also food, travel, recipes, towel animals, and the occasional random blog.
View all posts by LBcruiseshipblogger →
This entry was posted in Caribbean, Carnival, Mexico, Ports of Call, Shore Excursions, Splendor and tagged Cozumel, cruise, diver, fish, fun, photos, submarine, travel, underwater. Bookmark the permalink.