Snorkeling on Palancar Reef in Cozumel

Posted on September 14, 2013 by LBcruiseshipblogger 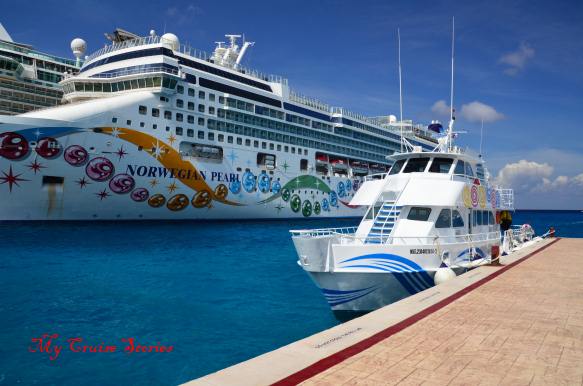 Palancar snorkel boat docked near the Pearl in Cozumel

The second largest coral reef in the world, the Meso-American reef, runs from Cozumel Mexico to Honduras.  Many people visit Cozumel to take advantage of the bounty of diving or snorkeling opportunities in its warm clear blue waters. 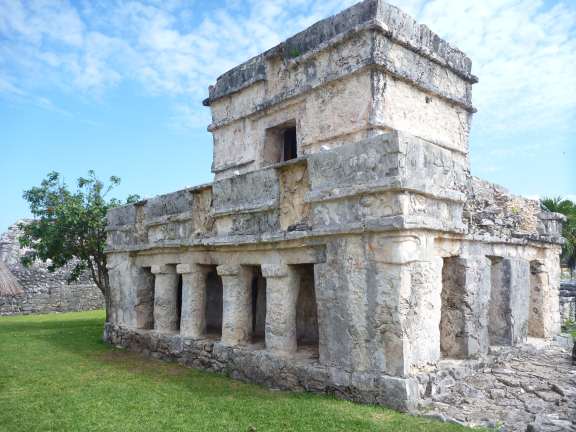 Temple of the Frescoes at Tulum

On our first visit to Cozumel on last year’s Carnival Liberty cruise, we took the excursion to visit the Mayan ruins at Tulum.  This excellent excursion took us to the mainland of the Yucatan Peninsula.  We had a great time and learned a lot, but did not see much on the island of Cozumel.

Our cruise on the Norwegian Pearl made a stop at Cozumel.  This time we decided to stay on the island and see the reef.  We pre-booked a shore excursion called Palancar Snorkel and Playa Mia.  Palancar is the name of a particular reef, and after snorkeling time on the reef we then would go to Playa Mia beach park. 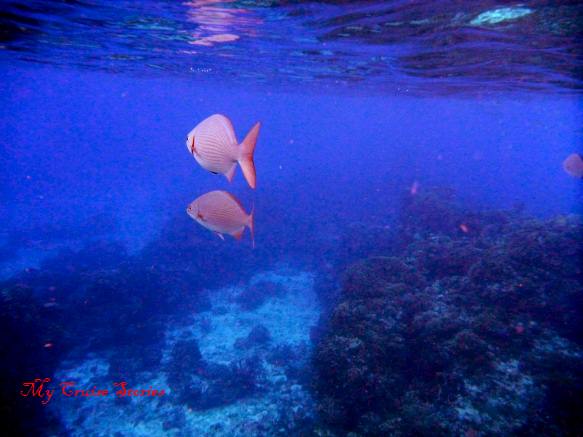 Our ship arrived into Cozumel at 11am.  We passed two other Norwegian ships on the way in, the Dawn and the Star, both docked in town.  We docked at the international pier next to Royal Caribbean’s Freedom of the Seas, which had anchored near us at Grand Cayman the previous day.  On Carnival’s nearby pier the Conquest sat next to the Magic, which also came from Grand Cayman.

on the Palancar going to the reef

We had a short time to browse the shops at the pier before meeting up with our shore excursion group.  After waiting a bit for everyone to arrive, we left about 10 minutes past the time we were supposed to.  They seemed to be waiting for someone as they would count the tickets and look at the time, then wait a bit longer until giving up and just taking those who managed to show up on time.  People tend to miss the boat in Cozumel as shore time is an hour behind ship time.  Perhaps they miss shore excursions that way too. 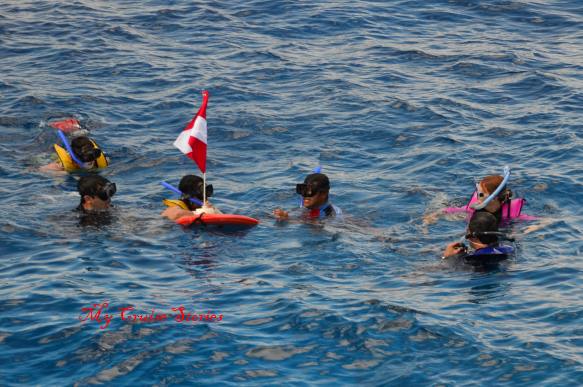 Wait…what? We were supposed to follow the guy with the flag?

The guide led us to a boat waiting at the dock, aptly named Palancar, just like the reef.  On the way to the reef they handed out snorkel gear to the people who needed it and gave out hand signals to use if you wanted to get back on the boat or if you were OK.  They said something about swimming toward a guide with a flag and a life ring and not trying to follow the boat, but we thought that meant if you wanted to get back on board.  We’ve snorkeled many times and really didn’t pay attention.

Every other snorkel excursion we’ve ever taken the boat stayed in one place and people just snorkeled on their own around it.  They did mention seeing reefs in three different depths, but we just assumed you swim here a bit then get back on the boat and go someplace else like the rest of the snorkel excursions we’ve done.  As soon as we got in the water, we saw a turtle.  We happily followed the turtle around awhile, me with my trusty Panasonic Lumix underwater camera.   After a bit the boat took off.  Odd, we thought realizing we were all alone.

What’s wrong with being an ass?

The guy with the flag had swam quite a distance away, the others following him.  Who knew? We thought he was just out there for safety.  Apparently we should have paid attention to the instructions before we got into the water and not just assumed this excursion would be like the rest.  At my day job they always say assume makes an ASS out of U and ME. 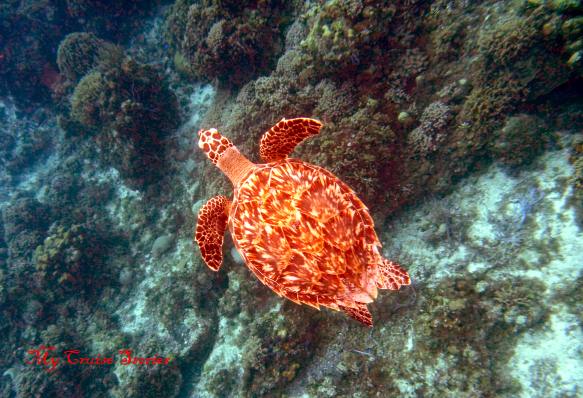 distracted by this turtle, we did not notice everyone else swim away….but they missed the turtle

We spent a bit of time catching up to the group.  I pretty much wanted to snorkel leisurely along the way.  As long as we could see the others I really wasn’t concerned that we weren’t with them.  Fish in this area offered better photo ops than any I’ve seen elsewhere as they would actually come right up to us rather than swimming away when they saw people.  In this incredibly clear water I could actually see what was in the picture on the camera screen instead of shooting blindly like usual.  Sometimes a group of fish would swim alongside us for awhile.  I even got a photo of one chasing after John while he nagged at me to hurry along and catch up to the group, which kept swimming away from us.  He mostly kept his head above water watching them and missed the undersea wonders right below him. 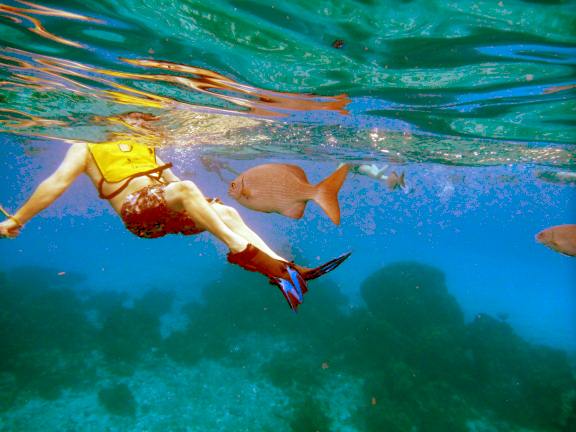 It turns out the three different depths of reefs we saw were swim overs.  That was why they all kept going, we swam from one reef to the next.  We did catch up to the rest of the group about the time one lady signaled that she wanted back on the boat.  John decided to get on with her so he could take photos from the boat.  He has always preferred to take photos of other people having fun over having any fun himself.  He’s also not nearly as into snorkeling as I am.   I stayed with the group after that, but rather missed the open space we’d had without them.  Not to mention swimming off with them at the start would have meant missing the turtle.

The coral at Palancar looked bigger and healthier than most of what I have seen in other places in the Caribbean, though not as bright and colorful as Australia’s Great Barrier Reef.  Some was quite a distance below us, other parts just a few feet down.  Coral needs structure to grow on, and rocks tend to come in all shapes and sizes so the coral goes up and down with the rocks in addition to the actual depth of the water. 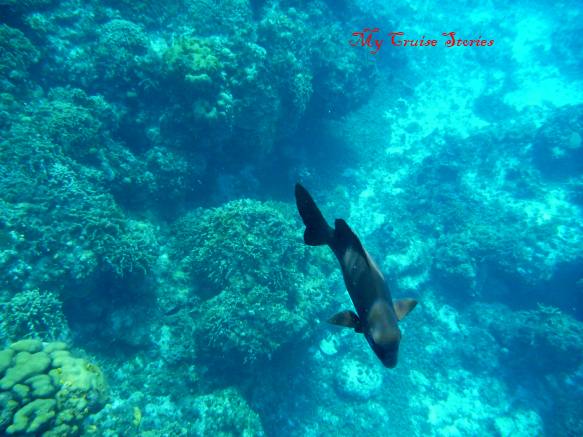 We did see some pretty big fish at Palancar

I saw bigger fish at Great Stirrup Cay, but a lot more of them at Palancar.  The water there is so clear that even after we got back on the boat we could still look down and see the ocean floor as the boat moved on.  The reefs at Cozumel are definitely worth seeing for anyone who likes to dive or snorkel.

MyCruiseStories blog tells stories about adventures in cruising on ships big and small. Things to do onboard and in port. Anything connected to cruising. Also food, travel, recipes, towel animals, and the occasional random blog.
View all posts by LBcruiseshipblogger →
This entry was posted in Mexico, Norwegian, Pearl, Ports of Call, Shore Excursions and tagged coral reef, Cozumel, Norwegian, Palancar reef, Pearl, photos, snorkel, travel, tropical fish. Bookmark the permalink.

11 Responses to Snorkeling on Palancar Reef in Cozumel