Posted on September 17, 2015 by LBcruiseshipblogger 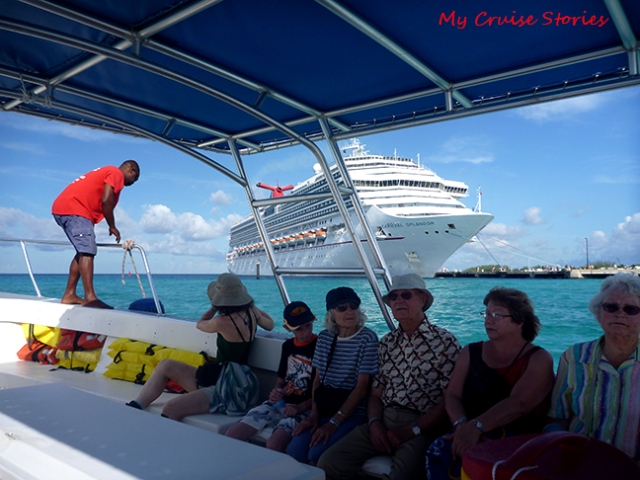 Splendor from the transport boat in Grand Turk

Lots of Carnival ships visit Grand Turk since the company built a cruise port there.  Carnival Splendor stopped in as the last port on the Puerto Rico to Miami cruise, the first leg of our back to back cruise. It has a dock and cruise center with all the usual cruise port shops. It’s also right on a nice beach with plenty of sandy areas for swimmers and some rocky areas for snorkelers. Margaritaville in the shopping area has a large shallow pool with swim-up bar. 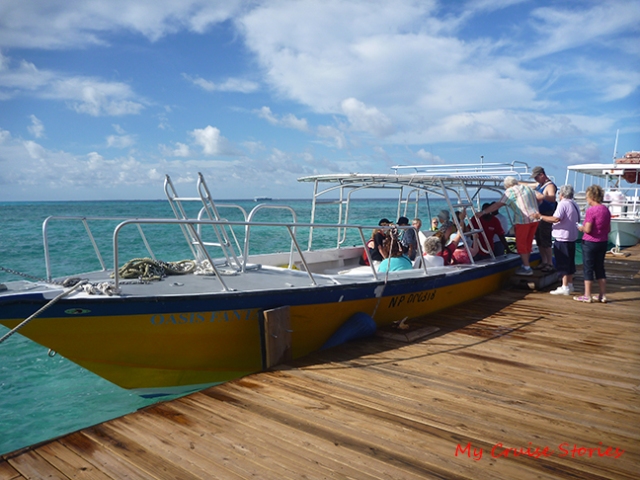 Major cruise ports see lots of ships, so they also offer lots of shore excursions. Offerings at Grand Turk include a semi-sub, something I have often seen but never done since we usually choose snorkeling to see what’s underneath the surface of the water. This trip we had other family members along, in an age range from 12 to 90.  None of them had snorkeled before or were sure if they wanted to. So we booked the semi-sub. 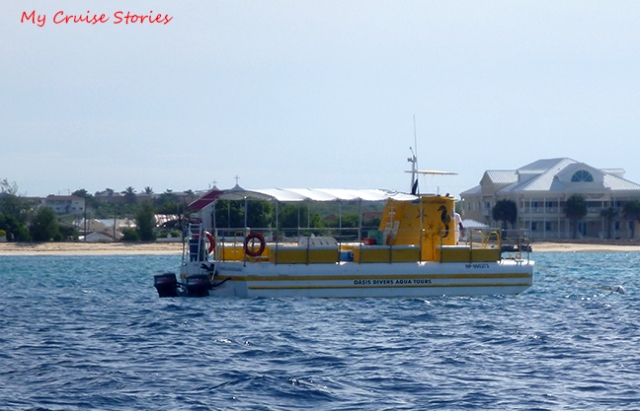 We took the long walk down the dock and entered the port through the duty-free shop, a standard at many cruise ports, though something we did not see at our other port stops this trip since they had all been on islands that do not see many ships and had their own local things near the dock. 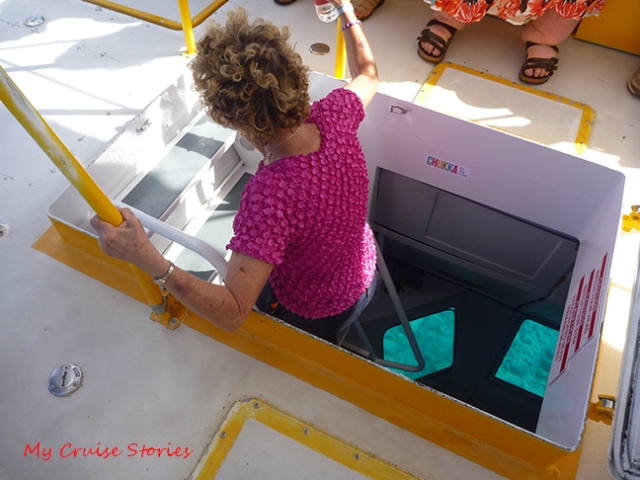 A passenger climbs down into the semi-sub

Several booths in the plaza on the other side of Dufry had signs for a variety of shore excursions. We found the sign for the semi-sub at the Chukka booth. Chukka provides a lot of tours on a variety of Caribbean islands.  We had a good tour with them river tubing on their home island of Jamaica. 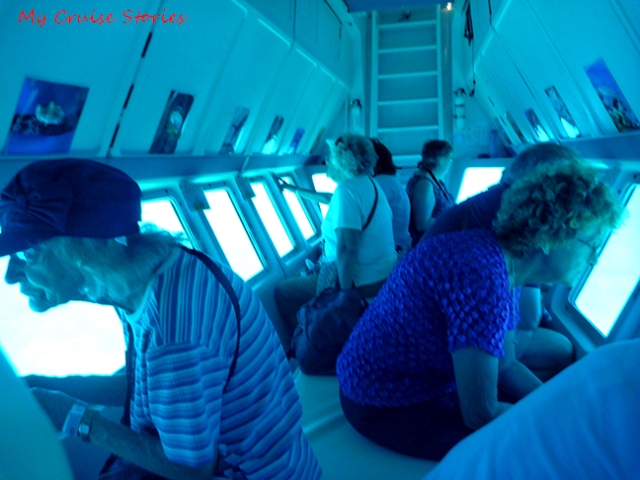 We checked in at the booth and got wristbands for our tour. Once everyone arrived we took a walk through part of the cruise center toward a smaller dock with several boats tied to it waiting to take people on their tours. Our group boarded the appropriate tender, which took us out to the waiting semi-sub.

we saw lots of fish

The guides gave everyone a briefing and then opened the hatch where passengers descended below one at a time. A cushioned bench ran the length of the interior with a row of windows on either side. Everyone sat on the bench facing a window so every seat had a good view. We saw a small shark before we even sat down. A large school of yellow-tailed snappers circled around constantly. Blue tangs made frequent appearances as well. 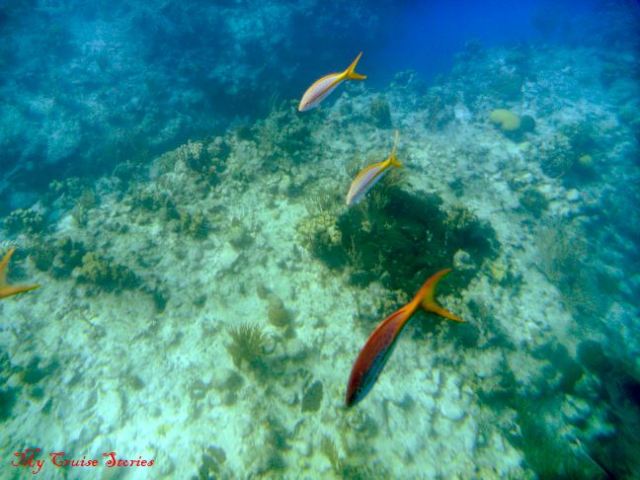 A semi-sub looks something like a barge on top, but is a self-propelled boat with underwater viewing area. It does not submerge like a submarine, which is why it is called a semi-sub. 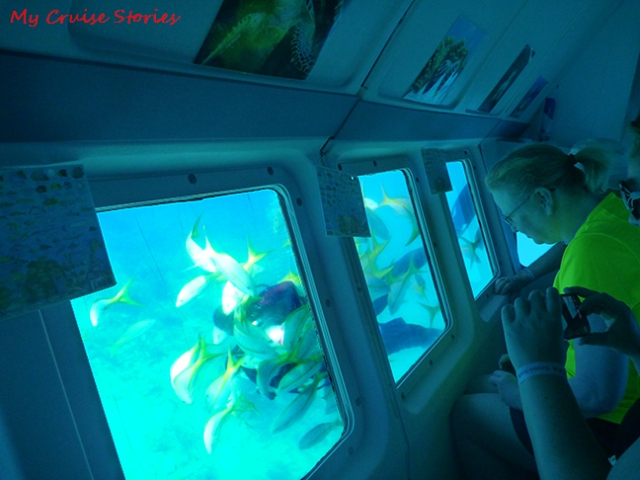 Once everyone got settled in the boat got underway. As we moved over the ocean floor the guide would point out things like “that big green one is a parrot fish.” We saw what looked like an old cannon, which could actually be one that dropped off an old-time ship in a past century, or it could have just been something else that resembled a cannon as it sat half covered on the sea floor. At one point we saw a cable, possibly the one that ran all the way to England in the early days of landline phones. 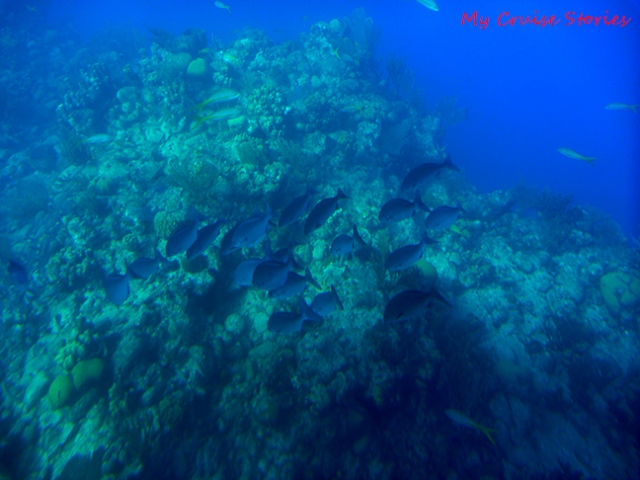 We passed over several types of coral on our way to the drop-off. When we got to the edge we saw structure and sea life and then sudden deep blue nothingness. Grand Turk has a drop-off that goes down over a mile. After giving everyone on both sides a chance to see the drop, the boat withdrew to shallower water and a scuba diver went in to feed the fish. 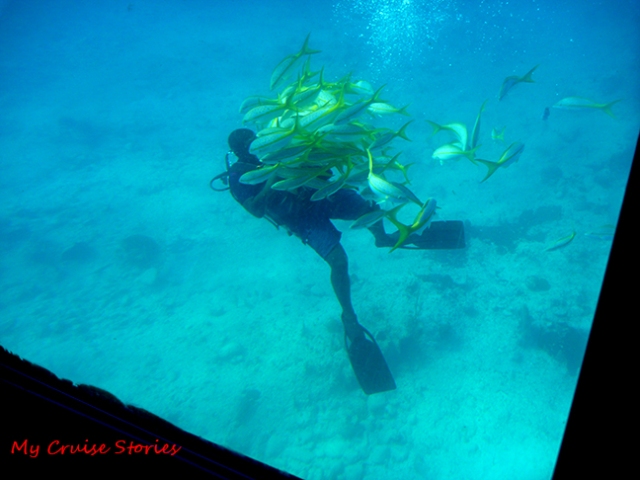 diver with a ball of yellow snappers

We soon saw why the yellow snappers continuously circle the craft. The diver had a ball of them swarming him for handouts of sardines. He circled around so every window got a chance to see him go by surrounded in hungry fish. 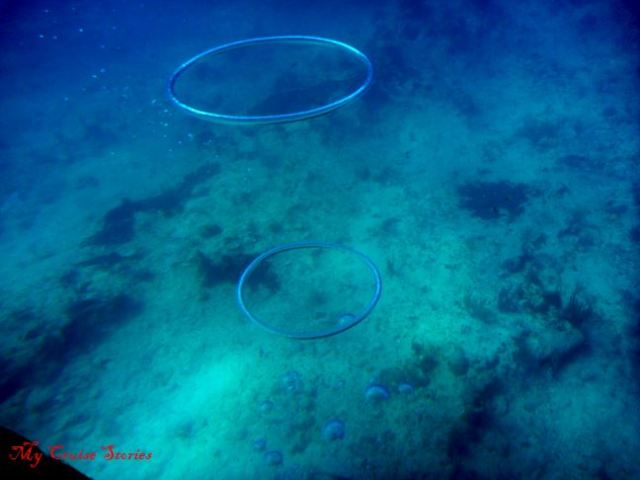 Once he ran out of sardines the fish dispersed and he blew water rings to entertain the passengers. Something like a person blowing smoke rings, the guide said. As the water rings floated to the surface sometimes two would collide. They made a big, but shaky oval upon collision which quickly fell apart and became ordinary seawater once more. 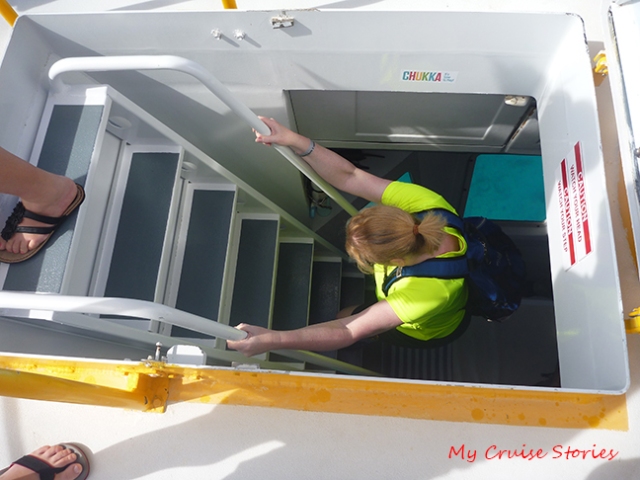 a passenger leaving the semi-sub

At the end of the tour we ascended on the opposite side of the craft and re-boarded our tender back to shore where we had lots of time left to spend in Grand Turk.