Posted on January 16, 2015 by LBcruiseshipblogger 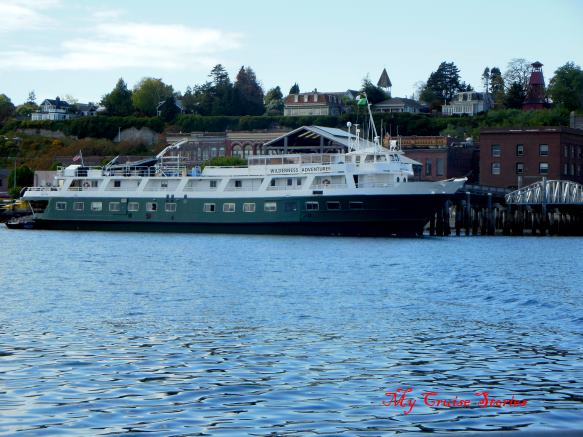 At the northern tip of the eastern end of Washington’s Olympic Peninsula sits a quaint little town called Port Townsend. Victorian architecture dominates the waterfront district, on the National Register of Historic Places since 1976.  Nearby Fort Worden, now a state park, is also on the register.  Port Townsend is the county seat and only incorporated city in Jefferson County.

In the late 1800’s Port Townsend was a busy seaport.  The town rose quickly in anticipation of the coming railroad connecting Port Townsend to Tacoma.  Then a depression hit and the railroad lines never made it that far.  Many people left the town.  Construction of nearby Fort Worden near the turn of the century, and in the 1920’s of a paper mill on the outskirts of town kept the town alive.  The paper mill is still active and one of the area’s largest employers.   The area where an earlier fort built to protect settlers once sat now operates as Old Fort Townsend State Park with trails, camping, and marine access.

Many artists call the area home and show their work in local galleries.  Town festivals help attract tourists, a major boost to the local economy.  The 1982 hit movie An Officer and a Gentleman filmed in Port Townsend and mainly at Fort Worden, temporarily bringing money and jobs to town.  Although the movie depicted Lynette and Paula working on the other side of Puget Sound their workplace was actually filmed at the paper mill in Port Townsend.

We visited Port Townsend on our Un-Cruise Adventures Washington Coastal cruise.  Our beer-themed cruise started the visit there with a tour of the Port Townsend Brewing Company.  Following the brewery tour (complete with beer tastings for the beer lovers in the crowd) a skiff from the Wilderness Adventurer brought us back to the boat, docked in the center of town.  From there we walked down the dock into the town full of interesting old Victorian buildings.  Many of Port Townsend’s assortment of galleries small shops in the old buildings were an easy walk from where the boat docked in the historic district.  It also has a great eatery called The Public House Grill in amongst the shops on Water Street, the main street through that part of the town.

As we left Port Townsend we saw a navy sub in the distance escorted by Navy ships on its way back to Hood Canal.  From a distance is all anyone sees these subs as they make their way to the bridge on the water’s surface.  Their escort keeps ships far away.  Some very unhappy drivers face a long delay at either end of the Hood Canal Bridge whenever a sub goes through on its way to or from the base at Bangor.