Posted on April 9, 2015 by LBcruiseshipblogger

In all my cruises on the big ships before the Splendor I had never had a cabin below deck 6. Sometimes we had balconies, sometimes inside rooms, but never an outside room with a window (or porthole).  Like most cruise ship passengers we looked down on the rooms on the lower floors as something less desirable.  In the interest of saving money, this time we tried something different on Carnival Splendor, an oceanview room on deck 1 with 4 people.

This cabin had quite a bit of space and even with 4 we never felt crowded. It had a bed near the window, but with space between the bed and window to walk over to the window and look out.  It had another bed a nightstand away, both beds parallel with the short end of the room.  A small table sat next to the second bed.  On the other side of the table parallel to the long side of the wall it had a bed which would be a couch if there were less people in the room, and above that a bunk that drops down from the ceiling. 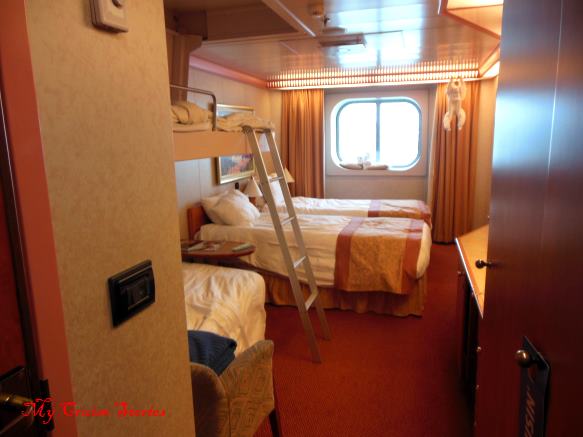 The opposite wall to those beds had a desk/dresser with mirrors above it, an undercounter stool in the middle, drawers, the mini-bar (which we had cleaned out to use as a fridge) and a cupboard and a couple shelves. There was also a chair next to the bed.  The entrance into the cabin consisted of a little hallway with 3 closets, one with 4 shelves and 2 with hangers sitting opposite the bathroom door. 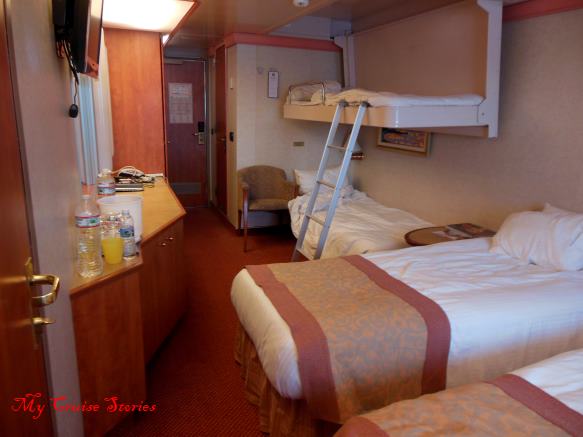 We had a good amount of space between the bunks and the desk so everyone could get around the cabin without running into anyone else. We always bring extra hangers as there are never enough with just 2 of us so we knew for sure we would need more with 4. Everyone had somewhere to put their clothes with all the different places the room had to put things. The nightstands also had little cupboards in them and we found space enough under the beds for all the suitcases even though one of them had the couch back under it since we were using that as a bed. The couch bed also had drawers underneath of it for more storage space.

bring your own outlets

Besides extra hangers we always bring a power strip. Cruise ship cabins often have just one outlet which is definitely not enough for two people, let alone four.  You don’t need a place to plug in the hairdryer though.  The ship provides a hairdryer that resides in a drawer where it has a permanent cord.

Four people in a room does mean a lot of stuff, but we helped keep the room neater by using magnets to keep anything paper we wanted to hang onto on the wall. (Walls and doors in cruise ship cabins are magnetic.) This kept things like excursion tickets and the daily Fun Times handy and easy to find as well as preventing them from cluttering up the counters. Magnets also come in handy to keep the key cards on the wall next to the door where they can easily be grabbed on the way out.

Sometimes everyone needed to get ready at once. Rather than each person waiting for the bathroom to change clothes, which can take awhile with 4 people, one person could make their own little dressing room area by opening a closet door and changing on the other side of it in the little hallway space between the closet and bathroom by the door into the room.  Occasionally someone needed the bathroom while somebody else was in the shower, but a handy public bathroom two decks up solved that problem. 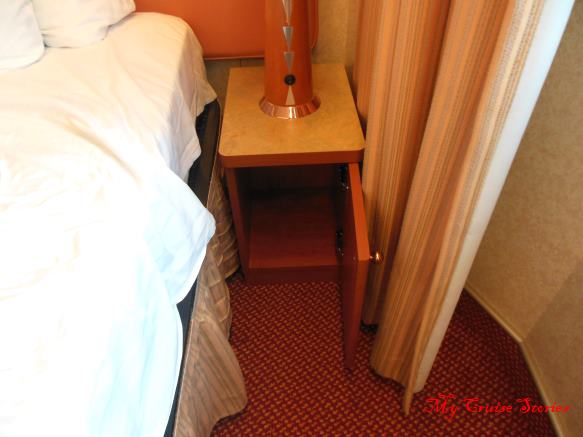 the nightstands had some storage space

I wasn’t sure how I would like being below all the other decks where passengers go, underneath the public areas even, but found out that I liked the bottom of the ship quite well. Well OK not the actual bottom, but the bottom for passengers. It’s nice to look out the window and have the water fairly close rather than decks and decks away. We could watch people come and go in port as our room was near the gangway and usually on the dock side. When we wanted to get on or off the ship in port the exit was just one deck away, making it easy to avoid the crowd at the elevator.

We ate at the Black Pearl on deck 3, so dinner was just 2 decks up, as well as the main theater. Of course the Lido, which means buffet, pools, and waterslide were many decks up, but the other public passenger areas on decks 3, 4, and 5 were quite close. Deck 1 just had an ironing room, but deck 2 had a full launderette, though it did take quarters rather than the sail and sign card used to operate the washers and dryers on most ships. They have plans in the works for updating the washing machines and dryers on the Splendor to the ones that take cards though.  Until they do if you have quarters you have a advantage because you can get a washing machine while other passengers are off looking for quarters.

Another advantage for bottom dwellers besides the fact that lower in the ship means cheaper rooms is that the lower they are the less you feel the motion of the ship which comes in handy for walking around on days when the sea is rougher as well as for people with motion sickness issues.

even the window could be used as extra storage space

Windows mainly are found in rooms too low for balconies, and are a great compromise between comfort and price. Oceanview cabins are often larger than inside rooms and also have natural light and a view, yet cost significantly less than balcony rooms. I would certainly stay in a lower level room again on a future cruise. I definitely prefer a window room over an inside cabin, and though a balcony is nice the window comes at a better price.  I have booked several cruises after returning from this one, all in lower level rooms.

Perhaps thinking of low level rooms as second class or less desirable stems from the poor people staying in steerage down below while rich passengers had suites above in old time ships, but that mindset rather makes those rooms one of the best kept secrets in cruising since it’s actually really nice down below. Even with inside rooms the same size room on a higher deck has a higher category listing and therefore higher price. If booking an inside cabin to save money you’ll save more the lower in the ship you go and odds are the room itself is the same whatever deck it’s on.

Check the deck plans before booking any cruise ship cabin. I always look for what is above and below my cabin, trying to avoid rooming above or below public areas or anything that may be noisy during the night.   Booking deck 1 you take your chances on what’s below, but whatever was under us never made any noise so we got lucky.  Deck plans also show the few odd rooms that are bigger or smaller than others in their category, or if booking a balcony room the ones that have extra balcony space.

MyCruiseStories blog tells stories about adventures in cruising on ships big and small. Things to do onboard and in port. Anything connected to cruising. Also food, travel, recipes, towel animals, and the occasional random blog.
View all posts by LBcruiseshipblogger →
This entry was posted in Carnival, Shipboard Life, Splendor and tagged 4 people in a cruise ship cabin, budget travel, cruise, cruise ship cabin bunks, cruise ship cabins, cruising with family, lower decks, photos, saving money on a cruise, travel. Bookmark the permalink.