Posted on May 20, 2022 by LBcruiseshipblogger

The Liberty tall ships have been sailing Boston Harbor since 1993. Liberty Clipper and Liberty Star are schooners modeled after ships of the 19th century. They run daily sailings seasonally, retreating to the Bahamas in the winter. They were still in port when we visited Boston in early October. The last afternoon trip had already set sail when we arrived at the Central Wharf ticket booth after walking the Freedom Trail so we bought tickets for a sunset sail. The voyage started out in daylight and ended in near darkness with the sun setting as we sailed around the harbor. 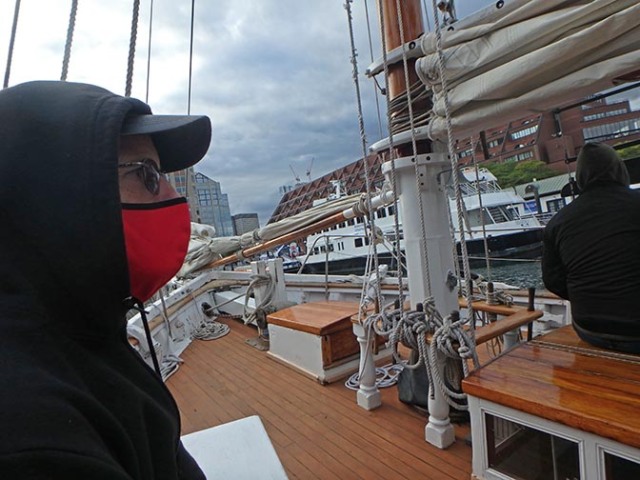 Two tall-masted wooden sailing ships sat next to each other tied to the dock next to Boston’s aquarium. Whale-watching vessels came and went in the small passageway between them and the fast-ferry and other vessels tied up on the other side. We had a couple hours to kill between buying our tickets and when the cruise started so we spent some time at the aquarium since it was right there next to the dock. 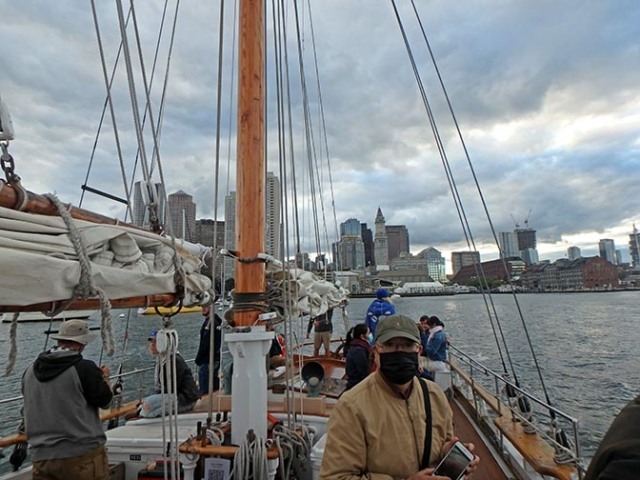 city view after leaving the wharf

After boarding people found places to sit on just about any raised surface along the sailboat’s deck. It had a couple actual benches, and many other spots that were part of the ship so everyone found somewhere to sit. A few of them could have made a better choice though. They sat next to the boom of the front sail, which would not be a pleasant experience once the ship set sail where the boom moves back and forth across the ship. It would likely hit harder than a baseball bat whacking someone in the head. The captain and crew did ask those people to move before the ship actually left the dock. The even larger booms of the much bigger central and back sails also swing, but they were higher up, above head level at rest and even higher once the sails were hoisted. 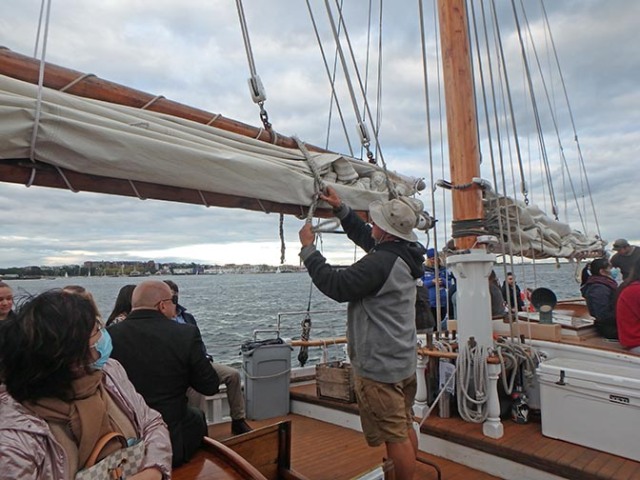 getting ready to hoist the sails

The ship left the narrow harbor under power, but once out into more open water it was time to raise the sails. The 2-person crew got some voluntary assistance from some of  the passengers to help pull on the ropes and raise the sails while the captain drove the ship. Likely they could have done it more quickly and efficiently themselves, but it’s all about the experience for the guests. Once that was finished the captain let anyone who wanted take a turn at the wheel. Mostly people just stayed there long enough for a photo op. 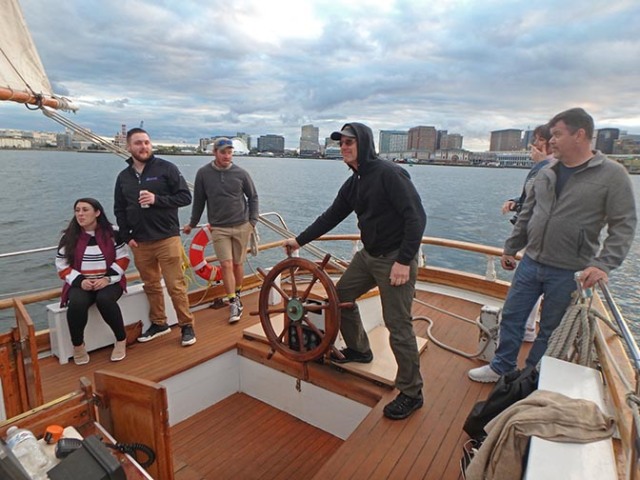 John takes a turn at the wheel

We had good weather and smooth sailing with the sails fully raised. When someone asked what all the strings dangling from the sails were the captain explained they were  for containing the extra material when they needed to shorten the sails down in strong winds.

The crew served drinks as well as manning the sails and dock lines, but didn’t say much. The captain on the other hand was as much entertainer as he was captain.

If we had come to town specifically for a sunset cruise we would have dressed warmer, but since we had come earlier in the day dressed for walking the Freedom Trail we were quite chilly as the sun sank lower in the sky and the temperature dropped. The wind didn’t help for comfort either, though it definitely was good for sailing being enough to fill the sails, but not so much as to cause rough waters.

a bit of color in the sunset

Although it was called a sunset cruise, and the sun did set while we were out there, there was not much view of the actual sunset. Boston is after all home to many tall buildings whose skyline blocked most of the sun’s setting. The city skyline itself made for a nice view in the ever darkening sky though. A bit of color from the sunset showed behind and between the buildings.

reflection of the sailboat in a building

One building in particular had quite a unique view. Before it began to get dark as the ship approached a very shiny building the captain mentioned knowing that people would like a photo of the ship in full sail. Of course you can’t get that from onboard so you would need either a friend on another ship or a giant mirror. I haven’t got a friend on another ship he said, but I do have a giant mirror. As we approached that big shiny building he said to watch for the ship’s reflection to appear. Another ship passed by between us and the building, but our taller ship appeared above it in the reflection. Later in the cruise we passed by it again on the way back. It was darker then and some of the rooms in the building had lights on which somewhat interfered with the reflection, but it we did get a bit of one even then. 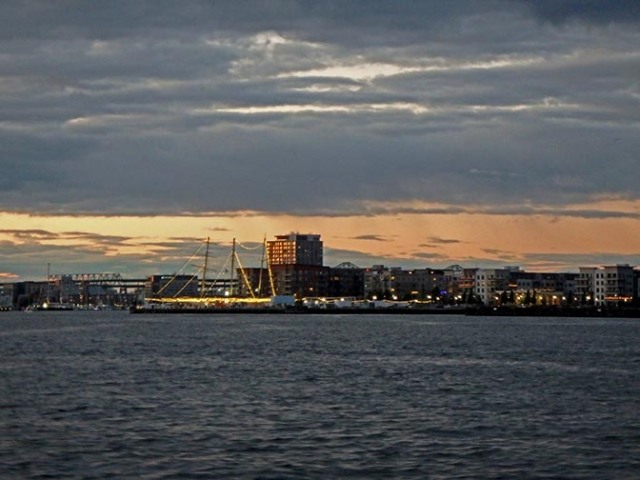 ship turned into a floating bar

The view changed as the sun went down from more water and sky to mainly city lights. The lighted outline of a docked ship in the distance brought a question from someone as to what it was for. The captain said it used to take kids out for learning to sail, but that company went out of business due to covid and the ship got sold to people who now use it as a floating bar.

We passed another ship that had tall masts with lights on top and no sails. It had Nantucket painted on the side in giant letters. The captain said it was a light ship – a ship once used like a light house guess where – obviously Nantucket. He went on to say that it was not the original lightship Nantucket, but a replica. The Olympic, a sister ship of the Titanic, plowed into the original and sank it in a thick fog while the lights, radio, and fog signals were on. Visibility was very poor at the time. The crew barely had time to don life jackets before the crash. Although the Olympic sent out life boats to search for them and 7 were pulled from the water, only 4 of the 11 crew survived. The original Nantucket still sits at the bottom of the sea where it sank that day in 1934.  So not a good track record for the White Star Line, whose response to the tragedy was to donate the replica now on display in Boston Harbor. 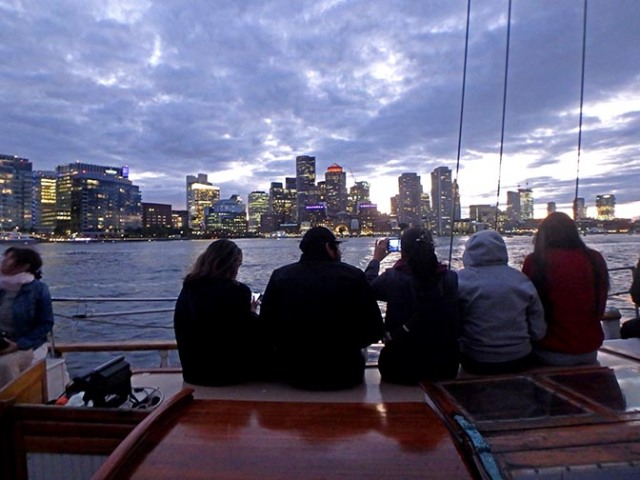 looking for color in the sky

It was a nice evening cruise. The captain was very entertaining and informative and the scenery beautiful and interesting.

sailing in the setting sun

In spite of feeling cold we had a good time on the sailing ship. When we were done we felt lucky that the aquarium subway stop by the wharf where the ship docked went to the blue line, which was the same line that went to the stop nearest our hotel so we could take it straight back without the need to change lines anywhere along the way.

MyCruiseStories blog tells stories about adventures in cruising on ships big and small. Things to do onboard and in port. Anything connected to cruising. Also food, travel, recipes, towel animals, and the occasional random blog.
View all posts by LBcruiseshipblogger →
This entry was posted in Day Trips, USA and tagged Boston, Boston Harbor tour, liberty ships, photos, sailing, tall ships, travel. Bookmark the permalink.