Shows on Symphony of the Seas

Posted on May 13, 2022 by LBcruiseshipblogger 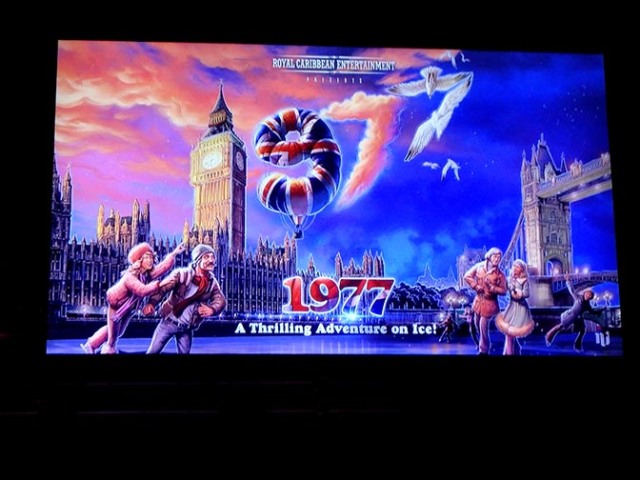 Most of the shows on Symphony of the Seas required pre-booking in their app. Which would be fine if there was actually availability to see the shows, but some were already booked full when they first appeared and others that were there when we boarded had all the choice times already taken when we went to book on boarding day. Even that wouldn’t be so bad if the bookings actually showed up. Two out of 3 shows that I booked did not show up either in the daily calendar or for the crew who check to see if you actually have a booking. Being my first time booking shows that way I didn’t know to look on the first one and assumed when it said we had made booking that we would be allowed in when we got to the show. This was for the water show, but when we showed up at the appointed time our booking wasn’t there and we had to vulture the show outside with all the people who didn’t have reservations to see if they would let us in once the show started. They actually let everyone in and there were probably more than 100 people waiting so either a lot of people book and never show up or they leave a whole lot of seats open. 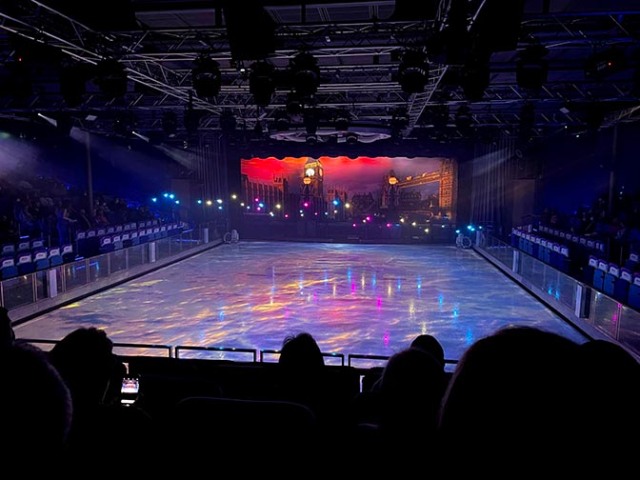 drone lights at the ice show

The booking went as scheduled for the ice show, and that one I checked to make sure it showed up ahead of time. Later in the cruise a theater show called Flight showed up in the app. I booked that one and then checked the calendar and it wasn’t there. Going back to the bookings it said I’d already booked and wouldn’t let me book again, though it never showed up on our daily planner or in the calendar. I finally found it in a screen that shows the boarding pass and such things. When we checked in for that show once again the crew said we didn’t have a booking, but that time I knew to look at the other place rather than the calendar to show them that we did have it and they let us in. So something was not quite right with their booking system. There were a few shows on the schedule that didn’t require a booking, but most of them did.

The first show we went to was the water show, called HIRO. We made a booking for a 10:30pm performance because all the 8:15 ones were already taken. Or perhaps the app just said that because families with children were allowed at the 8:15 performance while the 10:30 one was for vaccinated guests only so it may have only showed that one as being available even if the other wasn’t actually full. Regardless, the 10:30 one was the only one it would allow me to make reservations for, but in spite of having said I had that reservation when I made it, when we got there it did not show up so this was the one we had to wait outside with all the show vultures until it started to see if we could get in. 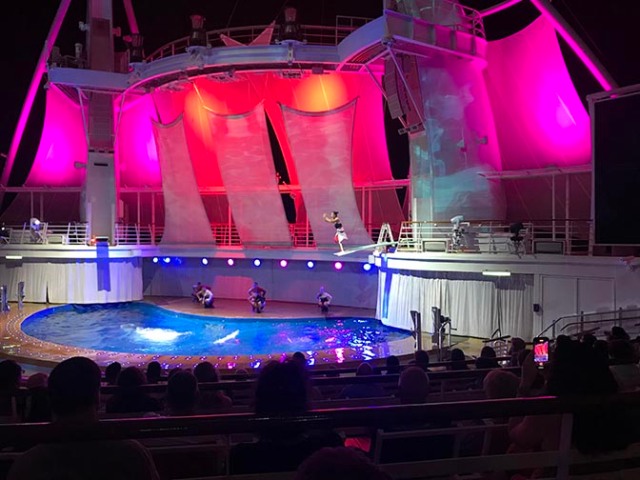 If we had known ahead of time that people could get in last minute without reservations we might have vultured the earlier performance. There was no sort of first come first served que or anything, people just mobbed the entrance once they were allowed in and the last to arrive were closest to the opening since they were just asking if they could get in, so they were the first to do so even though others had been waiting a long time. Luckily everyone got in. There were still seats to spare so either those were left open for social distancing or there were just very few people who actually got in with reservations and a lot of seats left open, or a whole lot of people who made them and didn’t show up. 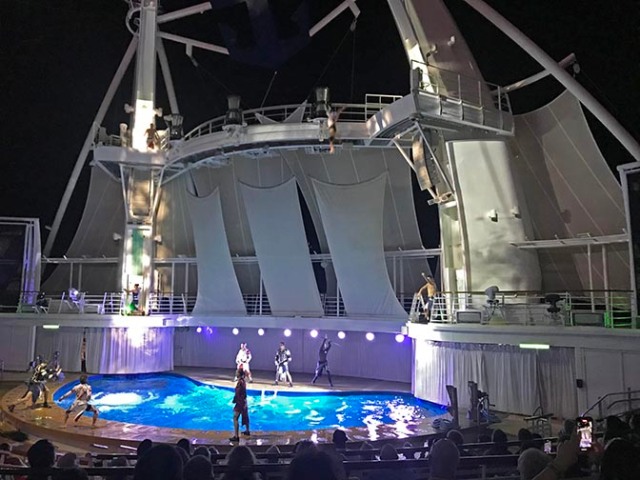 dancers, drummer, and legs in the pool

The water pool that is the main stage for this show had false bottoms that could make it anywhere from dry space that is not a pool at all to deep enough for high divers, and other levels in between from ankle deep to about the depth of half a person. Not all spaces in the pool were always at the same level either, sometimes there was a walkway through the center while people dove into the ends. 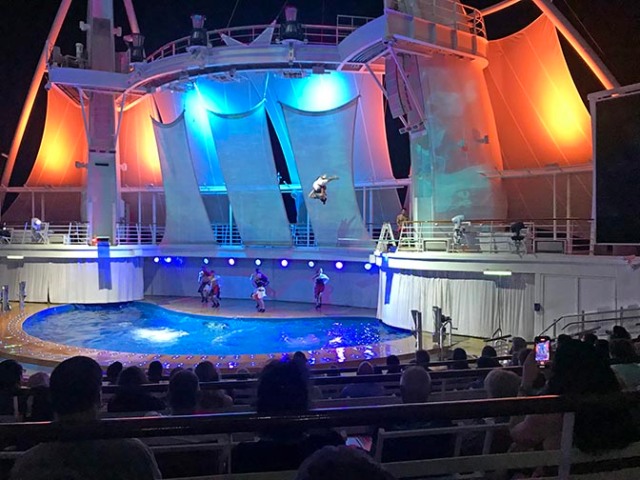 diver in the air

Costumes for this show were reminiscent of old Samurai warriors, or at least enough of a resemblance of such to give people the idea that is what they were. It was quite a varied show with lots of dancing, diving, and drumming. It also had aerialists and tightrope walkers. It was also quite loud. You could hear it about halfway through the ship, and other nights we heard it from our room, which had just one cabin between ours and the big fancy suite at the back with a wraparound balcony going both from the inside with a view of that show to the outside along the water. Ours was just a regular waterside balcony cabin. The boardwalk view balcony cabins at that distance probably could have at least somewhat seen the show from their balcony as well as hearing it from their room. 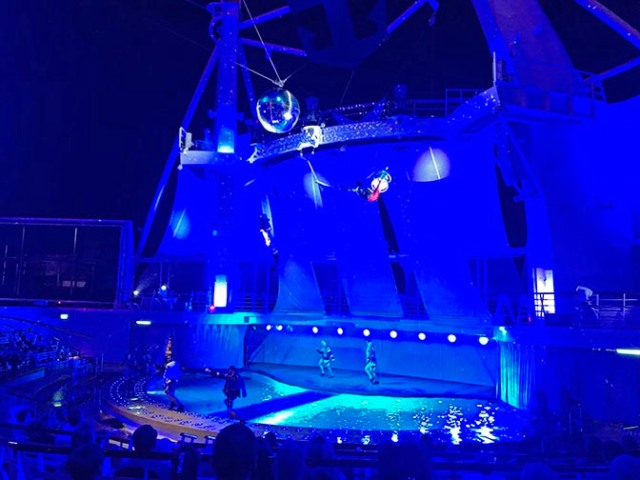 diving from the top

A narrow strip alongside the pool came equipped with fountains that sprayed up on both sides of a line of dancers on that bit during part of the show. It was definitely worth seeing, far more than an average cruise ship production. Throughout the show the water level in the pool changed often. People would dance in ankle deep water, then as soon as they cleared the way divers might drop down from above, or perhaps dancing legs would appear sticking up from the water with the upper half of the person hidden underneath. It changed often between divers or drummers way up high to dancers or other water level acts below as well as the part with tightropes and aerialists. 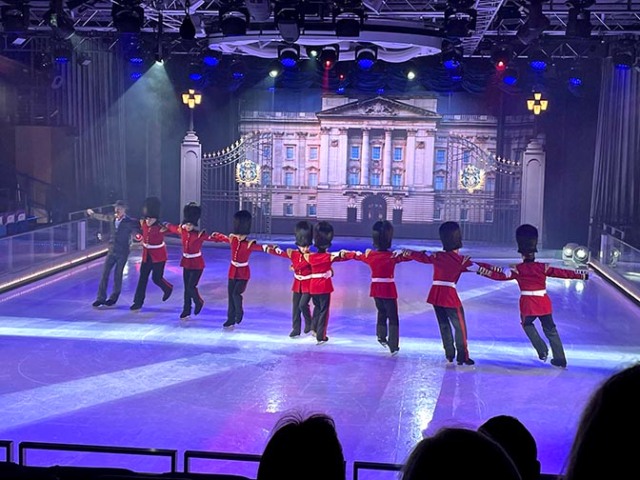 soldiers in London skate with the show’s hero

Lighting effects made the ice show called 1977 far more spectacular than the skating alone, and it was pretty amazing what the skaters could do in such a tiny ice arena compared to the size of skating rinks on land. It started out as London in 1977, with the lighting giving the ice the appearance of the river Thames. The show starts with quite a lot of lighted drones flying around with different colored lights. It just looks like lights until some of them turn off, at which time you can see the drones. 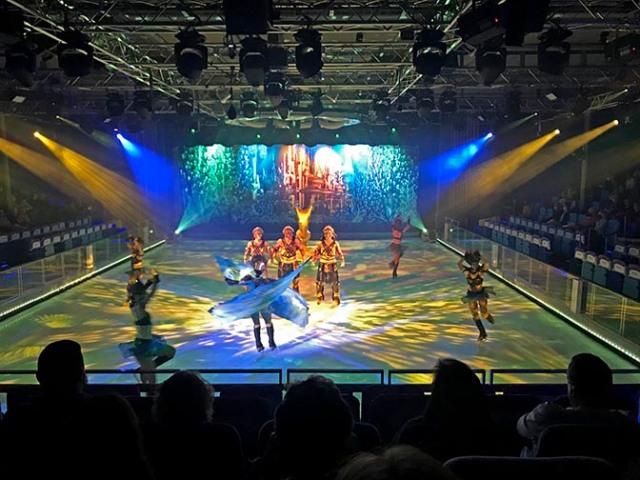 The premise of the show is a jewel thief stealing the crown jewels. The show’s hero follows that thief through time and places as the sets and costumes change flawlessly from one country to another throughout the show. 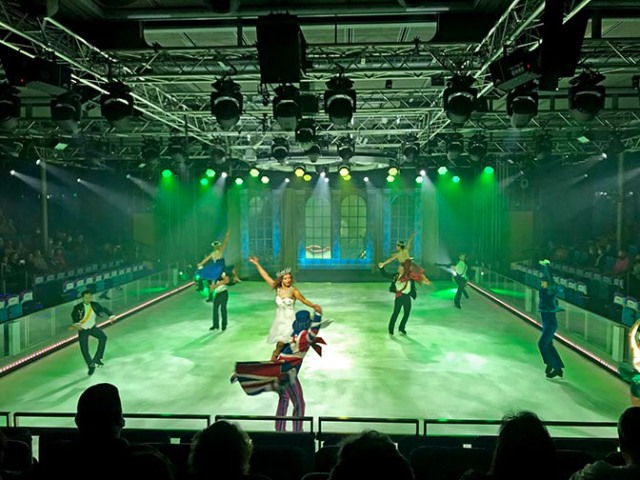 Lighting helps set the mood for each segment of the show as the hero and thief travel through time and many different countries. 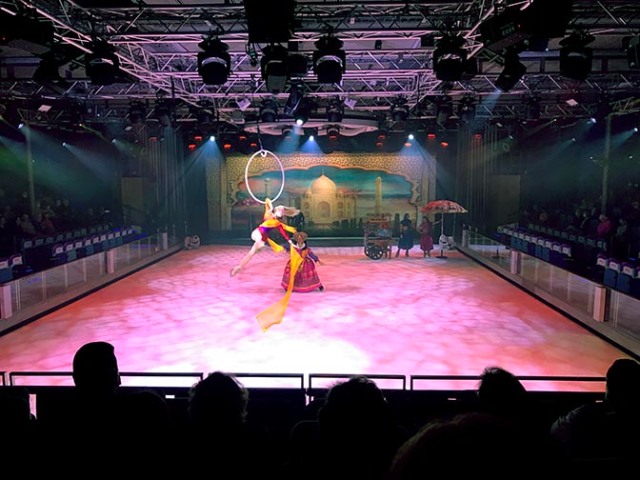 At one point there’s even an aerialist on skates who does most of her tricks above the ground in a ring, still with skates on, and some of them with skates on the ice while still encircled within the ring. Quite a few of the stage show on some ships feature aerialists, but doing that on ice skates adds another whole element of difficulty to the performance. 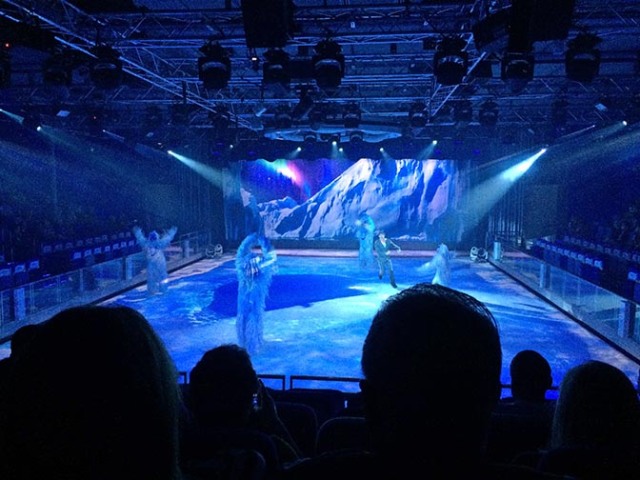 oh no, there’s a hole in the ice

One of the more interesting lighting effects shows the ice as ice – or at least most of it. There appears to be a hole in the ice through which all sorts of fish and even a giant whale swim past before the skaters come out for that scene. All of the skaters during that part of the show avoid the hole as if they would actually fall in if they got too close. 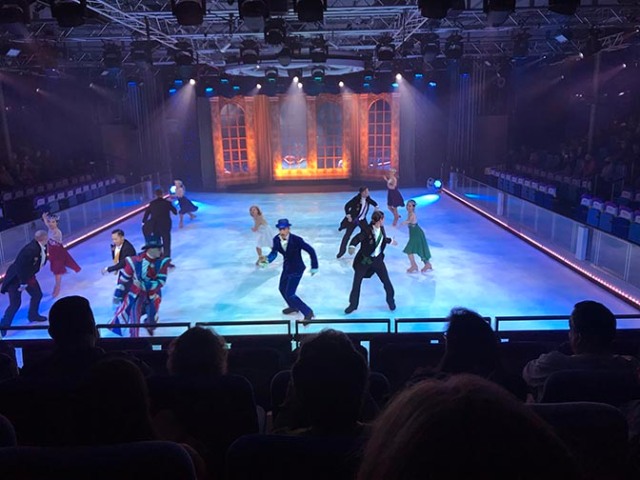 skaters at the ice show

At the end of the show the hero catches up with the thief, who turns out to be both a girl and his skating partner.

During our cruise they had several shows in the theater. We did not go to the Broadway type production of Hairspray, the singer, or comedian, but did go to the one called Flight that showed up on the schedule near the end of the cruise. We might have gone to Hairspray if an evening performance had been available, but did not want to commit to the 3pm offering on a sea day when we’d probably be busy doing something else and that was the only one open. 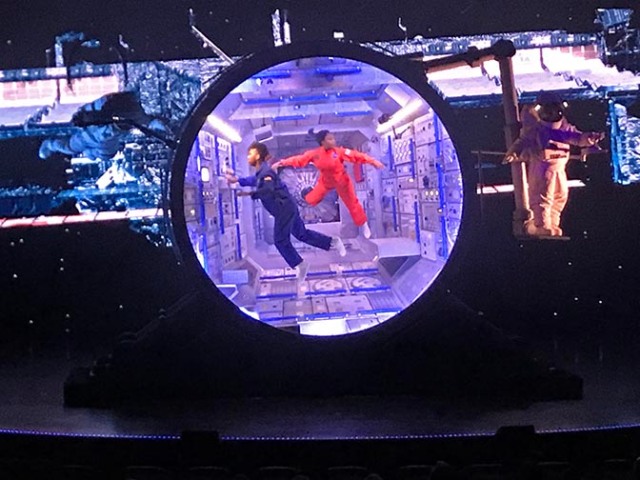 going into space on a cruise ship

We thought about going to the comedian as it was just first come first served and didn’t require a booking, but when the time came we didn’t feel like going to a show so we only went to Flight, which was one of their production shows. And quite a production it was. 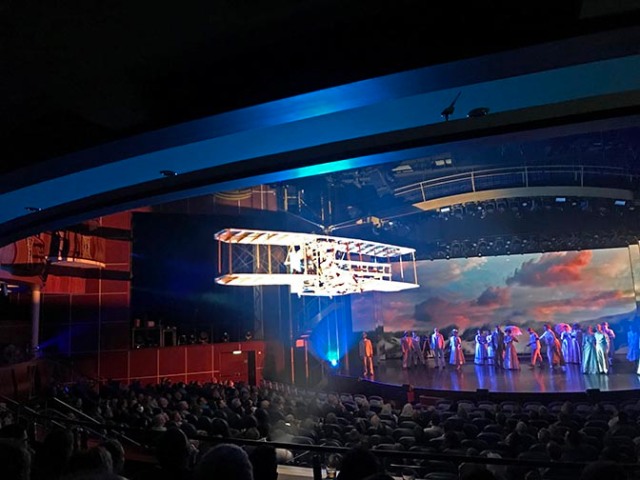 The flight show combined video screens with live action. It started out as a flight to Mars, then regressed through major flight events throughout history ending with the Wright brothers first flight – complete with an airplane flying around the theater with the aid of wires. 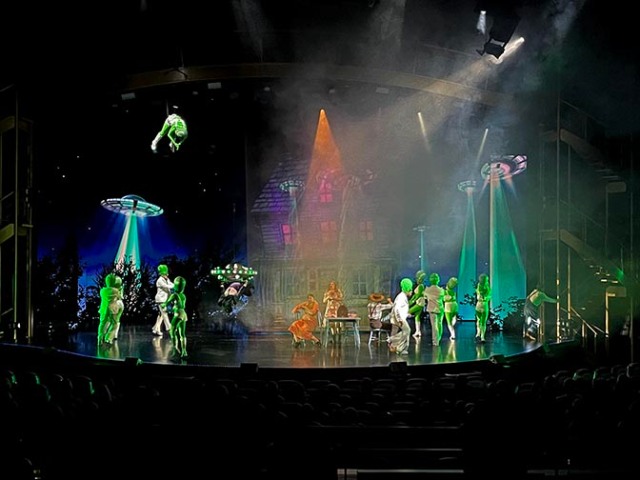 In between both real events like world wars, breaking the sound barriers, Amelia Airhart, and space flights had their time along with the radio broadcast of the imaginary War of the Worlds which came complete with dancing Martians. Though there was no actual invasion, the radio program and panic it caused are a real part of history. 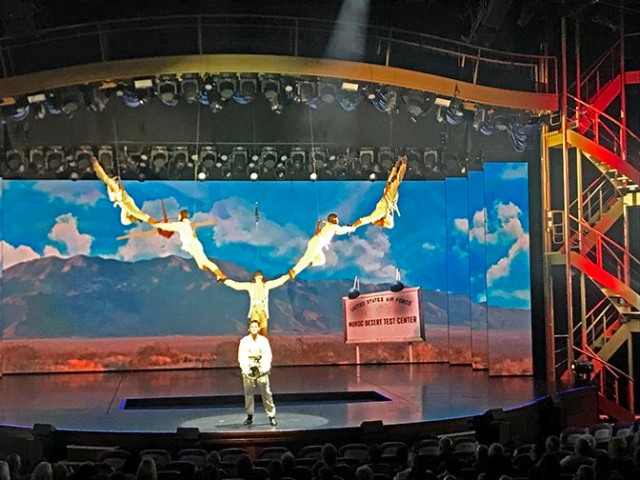 some of the aerialists in FLIGHT

The airplane wasn’t the only thing to fly during this show as there were numerous aerialists during some of the other sets. Aerialists seemed to be a major thing on this ship as they appeared in all of the shows that we went to. 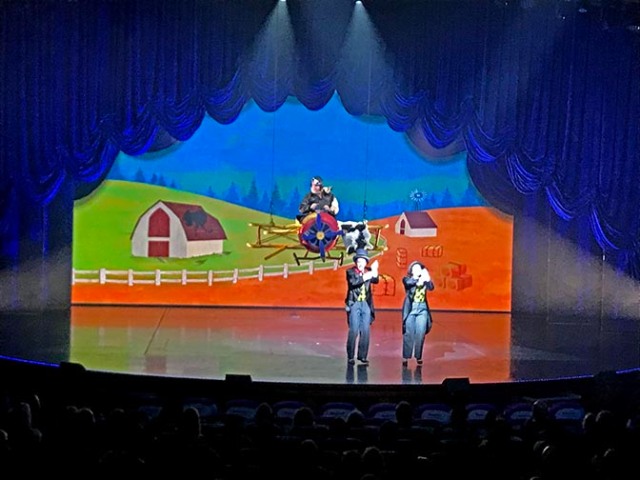 All three of the shows we saw on the Symphony of the Seas were definitely worth seeing.

MyCruiseStories blog tells stories about adventures in cruising on ships big and small. Things to do onboard and in port. Anything connected to cruising. Also food, travel, recipes, towel animals, and the occasional random blog.
View all posts by LBcruiseshipblogger →
This entry was posted in Royal Caribbean, Shipboard Life, Symphony of the Seas and tagged cruise, cruise ship entertainment, cruise ship shows, photos, Royal Caribbean, Symphony of the Seas, travel. Bookmark the permalink.

1 Response to Shows on Symphony of the Seas