Posted on March 27, 2020 by LBcruiseshipblogger

Royal Princess docked in the center of the waterfront activity at Seattle’s Pier 66. This pier is so much nicer for a port stop than being stuck out at pier 91 where ships often board for cruises usually heading out to Alaska. Being out in the boontoolies is fine for boarding day, not so much for a day in port. With a scheduled port time arrival of 11am, a line to get off the ship builds quite fast. To speed up disembarkation the crew split the line just ahead of us and our section was funneled out what would later become the crew entrance leading directly to the dock rather than the passenger entrance through the port building. Which meant no professional port photos at that stop for anyone in that part of the line who may have wanted them, and nothing looked familiar on the way back in. 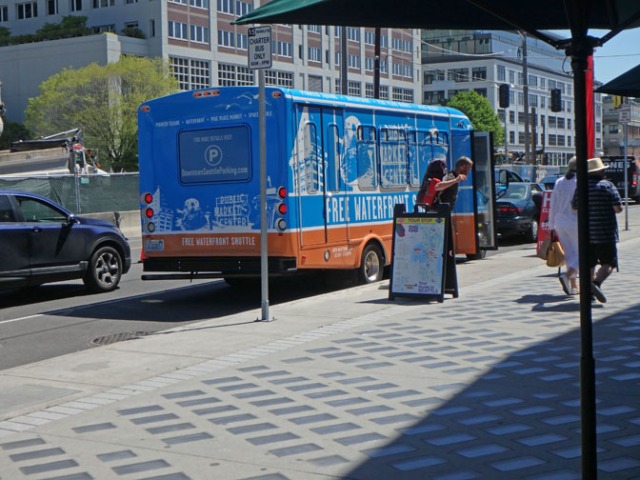 We had plans to take the Seattle Underground Tour. We made reservations in advance directly through their website for about a third of the price of booking through the ship. Of course the ship’s tour includes transportation, but besides the free waterfront shuttle being available if anyone wanted a ride to Pioneer Square, it’s not that far so we just walked.

We knew to walk south from the pier and inland a bit, but were not quite sure where to turn inland from the waterfront. The sign saying Pioneer Square with an arrow pointing up a road made it pretty obvious, as did the Pioneer Square flags on lamp posts along the street leading directly to where we needed to go so we didn’t need to use google maps or anything to find it. It was just a couple blocks or so from the waterfront to a more or less triangular plaza where Doc Maynard’s Pub is located, and the entrance to the underground tour right next door.

remnants of a bank in Seattle’s underground

The tour starts with everyone sitting in a room listening to a bit of Seattle history. More historic stories were told throughout the tour at various stops along the way. Early settlers built in the tide flats so the original natural waterfront was at Pioneer Square, even though it’s now inland a couple blocks. Entire horse-drawn carts could disappear into the potholes in the early roads, which were then filled in with sawdust, a plentiful by-product of the town lumbermill.

abandoned toilet in the underground

When your town is in a tide flat sewage is a major issue. You can’t dig a pit for a pit toilet and anything that goes out with the tide comes back in when the water returns. So they were ecstatic at the invention of the crapper, though it took the shipload with their order for 10,000 of them 10 years to arrive. Residences on the hills above did just fine with their new installations, and of course the plumbing (in wooden pipes) all ran downhill emptying into the sea. Down in the tide flats toilets flushed just fine at low tide. Not so much when the water came in. People built higher and higher toilet platforms trying to elevate their crapper higher than the neighbor’s because whoever had the lowest one got a geyser of sewage coming out when the tides came in and backed up the system.

remains of an old wooden pipe

All the buildings of the town were made of wood. With metal nails being expensive and hard to come by boards were often stuck together using glue. Which sounds fine except their glue did not come out of handy plastic bottles labeled glue. It came from highly flammable compressed animal parts heated to boiling over a fire. When a newbie to town didn’t watch his glue pot it boiled over.

even the street signs were made of wood

Circumstances ranging from him exacerbating the fire by trying to put it out with water on the glue to the fire department using new and untested waterlines that didn’t have enough pressure trying to put the fire out after it spread into the building and ending up with no water, to wind blowing the ever increasingly raging fire onward through the row of wooden buildings that made up the town led to burning down a significant portion of the business district. It didn’t help that at the time even the water pipes were made from wood. 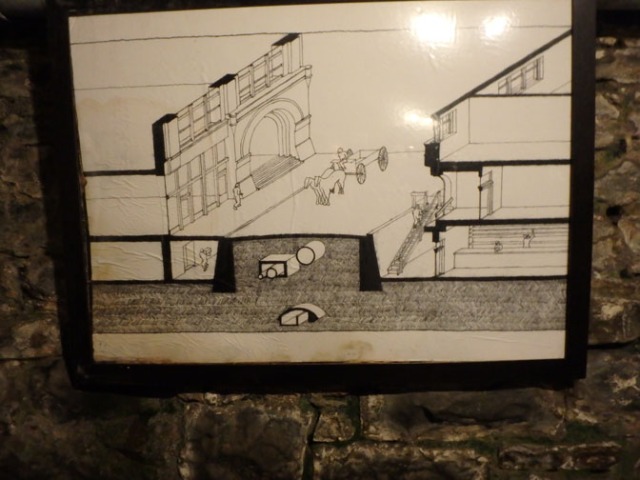 drawing in the underground showing the streets high above sidewalk level

For rebuilding the town leaders required use of brick and stone. They wanted to raise the streets so they could run the plumbing underneath ending the toilet backup geyser issue, which sounds fine, but would take about 10 years and nobody wanted to wait that long to rebuild their business. They needed to rebuild right away so all the buildings had to be at least 2 stories high in order to have at least one level above the height of the new road after it got built. Once the roads were raised the sidewalks and business entries were a story below the roads so people had to go up and down ladders whenever they crossed the street. Not an easy task for a woman in old fashioned long dresses with hoopskirts, and even harder for the men who got drunk and ended their drinking problems with Seattle’s one-step program. This involved climbing up the ladder to street level and taking one step in the wrong direction. These deaths were given the classification of involuntary suicide. 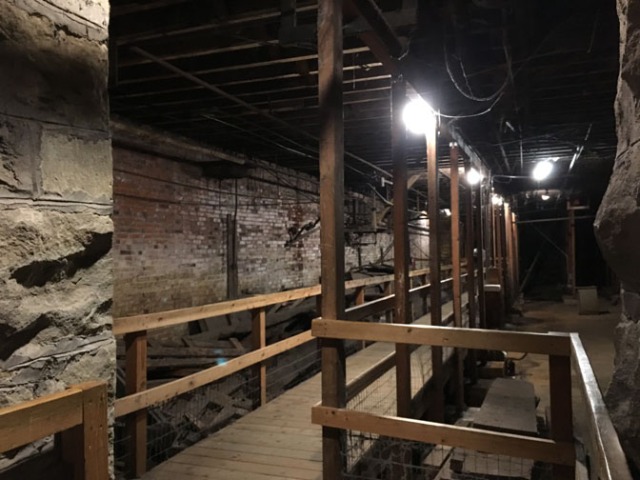 some of the walkways through the underground tour are flat, level, and easy walking

others not so much

Business owners finally convinced the town to add sidewalks adjoining the buildings to the streets so the second story became street level and the first story the underground. Sidewalks included sections of little glass squares to provide light to the lower level. 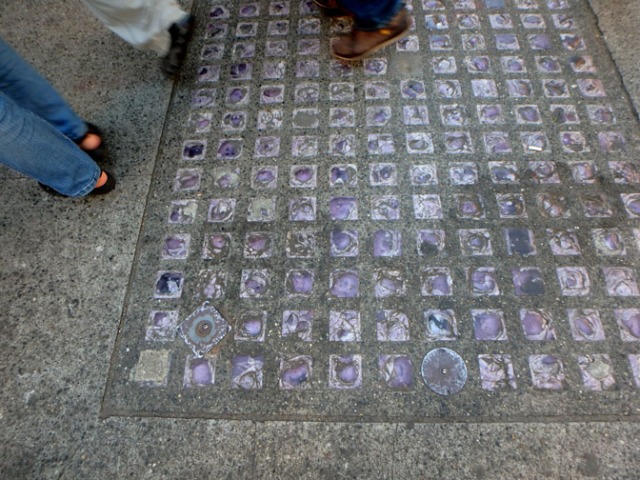 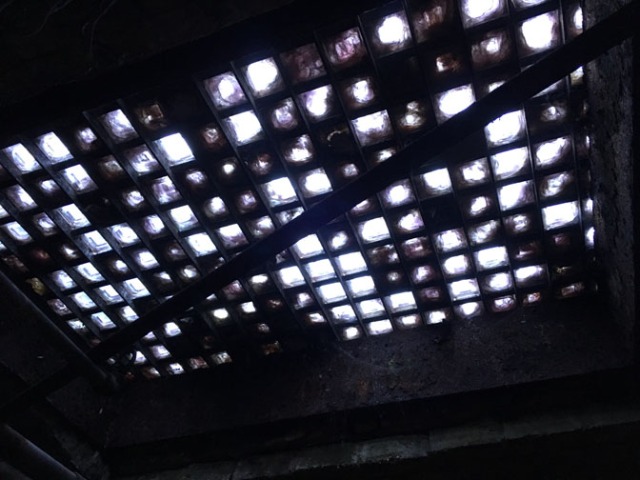 At the time the glass was clear, but over the years it became purple. The lower level was a lively business district for awhile until rats moved in and a bubonic plague epidemic broke out. The underground was sealed off and mostly forgotten except during prohibition where it became a handy place for moonshiners.

view of an old sidewalk on the underground tour

Over time the sections used in the tour vary as some areas get renovated and used for new businesses, and others filled in to support the buildings above which otherwise could sink into settling ground or fall in an earthquake. The floor in some areas of the underground has dropped and settled so unevenly that those spots would be prohibitively expensive to renovate and will probably remain on the tour, which has built a wooden walkway over some of the uneven areas. 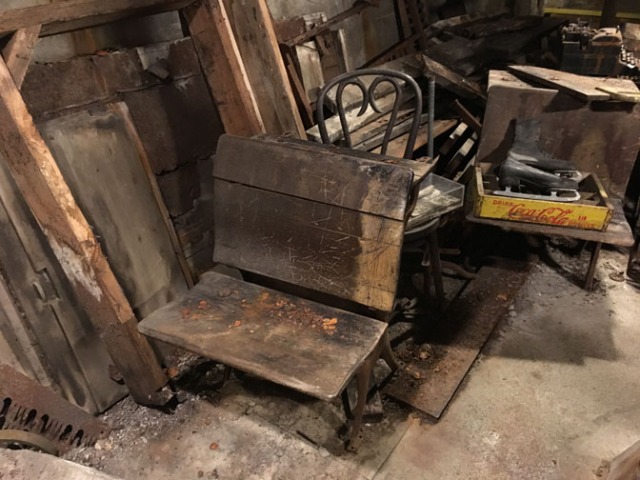 relics in the underground

There are glimpses into the past in the things left behind by former occupants, discarded to the underground forever in piles. Here and there signs from former building entrances remain. The skylights in the sidewalk provide some light in a few underground areas, through the aged purple glass. Electric lighting provides most of the illumination.

underground memorabilia in the gift shop

As is usual pretty much anywhere, the tour exits through a gift shop. This one is in a renovated area of the underground, which looks nothing like the unrenovated areas. The floors are even and the walls are clean. It does have some items from the underground on display, but they too are clean and nice looking. Again nothing like the dusty piles of discards we passed on the tour.

It even has a toilet. Old fashioned, yes, but clean of course, and quite fancy. The store also has some regular touristy type underground tour themed merchandise. Being part of the underground, it does require going up a set of stairs to get to street level.

view from our table at Anthony’s on pier 66

I had a gift card to Anthony’s someone had given to me on a Christmas past, which I hadn’t used since there isn’t one near my house. Knowing there is one on the Seattle waterfront, I brought the card with me on the cruise. We had time on the way back to the ship to stop in. Anthony’s is conveniently located on pier 66. Extremely convenient for us since that was where our cruise ship docked. This waterfront restaurant normally has views of Elliot Bay and Mount Rainier. We were seated at a table by the window overlooking the pier – with a view of a portion of the Royal Princess. When there’s a giant ship docked in front of a restaurant on the pier, that’s all you see, the ship. And not even all of it since it was close enough that we just saw a portion of it through our dockside window. Guess we couldn’t really complain about that though since we came in on that ship – and we could get all the view the restaurant normally had and then some from the ship itself.

under the sidewalk skylights on the underground tour

MyCruiseStories blog tells stories about adventures in cruising on ships big and small. Things to do onboard and in port. Anything connected to cruising. Also food, travel, recipes, towel animals, and the occasional random blog.
View all posts by LBcruiseshipblogger →
This entry was posted in Port Cities, Ports of Call, Princess, Royal Princess, USA, Washington and tagged #seattleundergroundtour, cruise, Princess, Seattle, things to do in Seattle, underground tour. Bookmark the permalink.