Cruising Through the Ballard Locks

Posted on September 25, 2015 by LBcruiseshipblogger 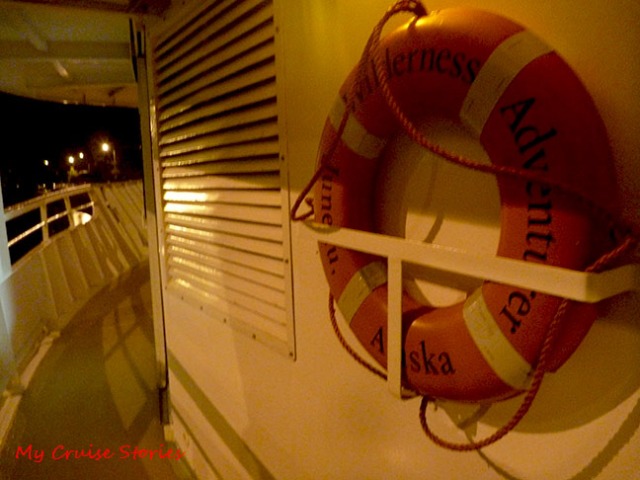 Wilderness Adventure in the Ballard Locks at Night

People take cruises through the Panama Canal and marvel at the 3 sets of locks they pass through as the ship transits the canal.  You don’t have to go all the way to Panama to find locks.  Seattle Washington has locks of their own, officially the Hiram M. Chittenden Locks, but commonly known as the Ballard Locks.  When I lived in Ballard as a child I never heard of them referred to as anything but The Locks.

a visitor to the locks walks across the gate

Completed in 1917, the locks complex includes large and small locks, a fish ladder (which was updated in 1976 to make it more attractive to both fish and visitors), a spillway to maintain the level of water in the lakes, a visitor’s center, and a botanical garden.  Visitors to the locks can watch fish in the ladder through glass windows in the underground visitor area.  From ground level they can watch boats pass through the locks.  This fish ladder uniquely brings fish from salt water to fresh while most fish ladders are located completely in fresh water.

view of the spillway on approach to the Locks

Similar to the Panama Canal which uses natural waterways connected by manmade cuts, a partially manmade ship canal connects Puget Sound to Lake Union and Lake Washington by way of the locks.  The lakes sit 22 feet above sea level so the locks serve to raise or lower boats from one waterway to another as well as preventing infiltration of salt water from the sound into the freshwater lakes.  The locks were added to the National Register of Historic Places in 1978.  Each lock has a set of gates at each end and valves for filling or draining depending on which direction the boats need to go.  The draining valve works by gravity when opened.

Securing the boat before the water rises

UnCruise Adventures home ports at Fishermen’s Terminal in Seattle. This freshwater port sits in Salmon Bay on the freshwater side of the locks just west of the Ballard Bridge.   A lot of fishing boats from Alaska home port there in the winter, including some seen on the Discovery Channel’s Deadliest Catch.  Fishermen’s Terminal also has shops and a restaurant.

tower at the locks

Before my Un-Cruise Adventures Washington Coastal Cruise it had been years since I’d been through the locks on a boat.  I went through the small lock sometimes as a child on boating adventures with the family.  On one trip through a full lock we tied up next to a cranky fisherman.  This happened ages ago so nobody remembers the exact story.  For some long since forgotten reason he was quite mad, yelling and swearing at my parents.  He must have had some luck fishing though because at some point between tying the boats up and before the lock filled to the point of untying them and sailing away he cooled down and apparently felt bad about his actions.  Many years before one of the fishmonger stalls at Pike Place Market made flying fish a popular thing in Seattle by tossing fish to their customers, we had one flying across the deck from his boat to ours by way of his apology. Now you might say this apology stinks (as fish tend to do) but it tasted good! 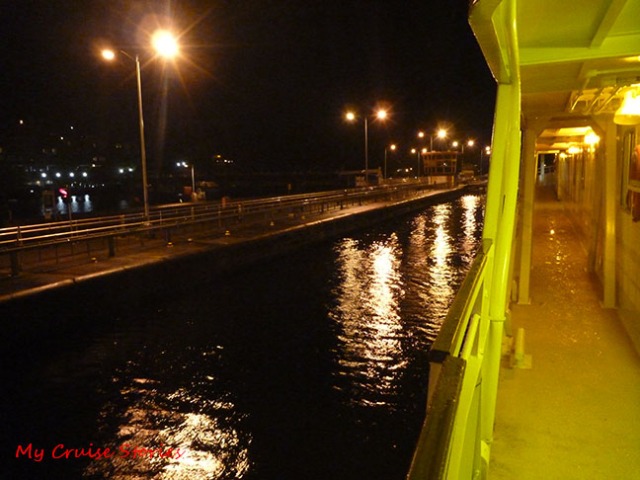 passing through the locks at night

At the beginning of our voyage the Wilderness Adventurer passed through the locks in the dark of night.  I went out on deck anyway and took some photos of the night crossing under the electric lights.  I did not see anyone else out on deck at the time, but I can’t resist a photo op proper lighting or not.  Maybe because I’m not a professional photographer and have no idea how to use the right light to make better photos anyway. 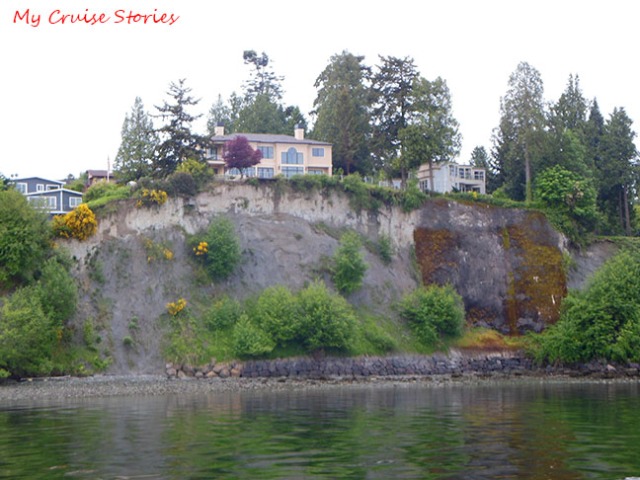 How long until the bluff falls?

Our trip on the Wilderness Adventurer returned through the locks with an early morning daylight passage.  On the way there we had a view of fancy homes clinging to an eroding bluff.  Approaching the locks we passed under a railroad bridge wide open and high in the sky. 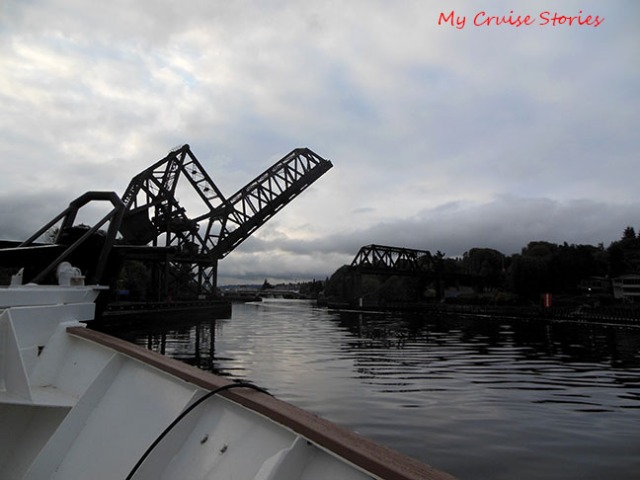 railroad bridge with locks and spillway in the background

Captain Ron had mentioned the possibility of a wait to get through if the locks had too much traffic in his after dinner talk the night before, but we lucked out and got right in.  We had the large lock nearly to ourselves.  Only one other boat tied up just behind us.  We passed through the locks that morning with the Victoria Clipper, a catamaran famous for taking passengers back and forth from Seattle to Victoria B. C. on Canada’s Vancouver island across the Strait of Juan de Fuca from Washington’s Olympic Peninsula.

Victoria Clipper in the locks

Victoria Clipper has 3 ships.  In Seattle they normally depart from the Seattle waterfront in Puget Sound at Pier 69 and would not venture through the locks.  I’m not sure what this clipper was doing there, but perhaps it needed to go to drydock for repairs or had some sort of special trip that day.

Turning at the Ballard Bridge

Just as it looked as if we would go under the Ballard Bridge the Wilderness Adventurer made a turn into Fishermen’s Terminal and tied up at the dock.  After one last breakfast on board we sadly had to leave the ship as our voyage was over.

Fishermen in a safety drill at Fishermen’s Terminal

Walking down the dock on our way out we saw a group of summer fishermen practicing sea rescues in preparation for the fishing season in Alaska.

map of the ship canal

map from the internet

8 Responses to Cruising Through the Ballard Locks