Posted on July 21, 2014 by LBcruiseshipblogger

Sometimes Plan B Works Out For The Best

We recently had the immensely enjoyable opportunity to join Un-Cruise Adventures on the first-ever sailing of their new Washington Coastal itinerary on one of their original expedition vessels, the Wilderness Adventurer.  Some passengers came for the beer-themed cruise, others for the destination.  A few chose this cruise because they had sailed on this ship before.  Most passengers flew in, but a few like us enjoyed the advantage of a local departure.

On a typical semi-overcast off and on drizzly Seattle day, all passengers for this cruise met at the Waterfront Marriot Hotel.  Some passengers stayed there or in a nearby hotel before or after the cruise to have a longer time to tour Seattle.  Others arrived that day and dropped their luggage in the hospitality suite reserved for Un-Cruise guests while taking a few hours to explore the area. 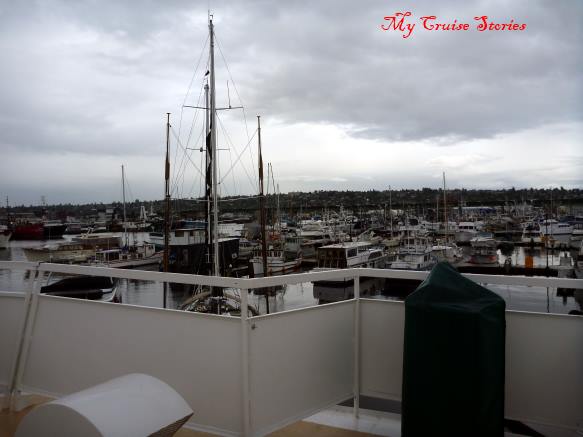 The cruise left out of Un-Cruise Adventures home port, Fishermen’s Terminal, which does not have any long-term parking available.  We could have parked in a garage where people often park when taking a trip on one of the large cruise ships leaving out of Seattle, but as we have friends in the area we saved the money and parked at their house, taking a cab to the hotel since our friends were not at home that day. 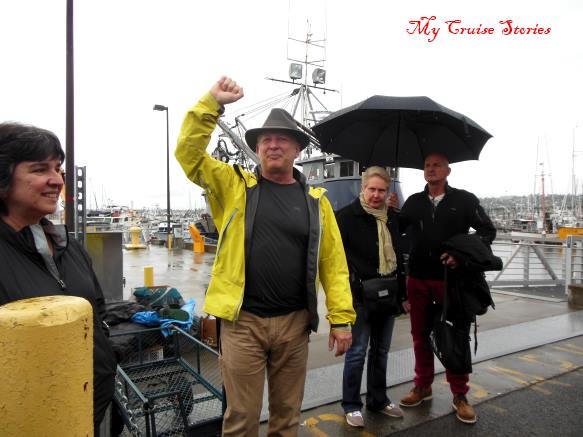 We joined a few people from the cruise in the hospitality room where we could help ourselves to free tea and wi-fi.   Others opted for the more comfortable furniture of the lobby, while most chose to roam around the Seattle waterfront or nearby Pike Place Market until time for the bus to the boat to arrive.

As we disembarked the bus at the dock,  we got a personal welcome from un-cruise staff and the owner, Captain Dan.

Fishermen’s Terminal seems to have a lot going on.  On the way in we saw firetrucks on the water’s edge, apparently practicing with their hoses.  On the way out workers getting ready to head north with the fishing fleet floated about in the bright orange survival suits sometimes called gumby suits for their required lifesaving drill.

Following the required safety talk and drill and we had social time and dinner, which included steak, salmon, or vegetarian choices.   Somewhere along the line the crew discovered we would have a delay in our departure due to a non-working gage and the need to find a replacement on a Saturday evening when most of the right sort of stores have already closed for the weekend.

Due to the delay, Captain Dan announced open bar on the ship, which meant drinks on the house.  Kendall Jones of Washington Beer Blog, our quick-thinking host of all things beer on this beer-themed cruise, came up with an on-the-spot plan B.  He called nearby local craft brewery Stoup Brewing to arrange a tour.  Any interested passengers got an extra impromptu brewery visit with their drinks on Un-Cruise.

At Stoup Brewery, patrons filled a row of tables near the bar, some with pizza in delivery boxes.  A stack of menus from a local pizza parlor sat on a stand near a wall for easy use by hungry guests who wished for deliveries of food.  Kendall led us past this and into the brewing area, explaining how the equipment worked as the brewer had gone home for the day before our unplanned tour.  When he finished people wandered about on their own or ordered drinks. 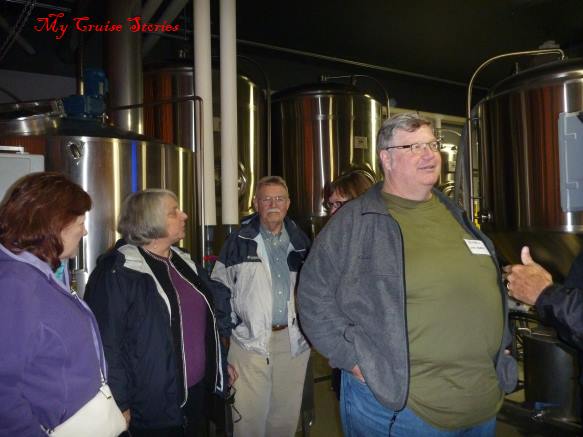 Diligence and hard work on the part of the Un-Cruise staff paid off as they found a gage and got it delivered that evening.  With the first planned stop of our trip not too far away at Hood Canal we woke up there the next morning as planned.  The cruise itinerary lost nothing in the delay, but instead gained an extra brewery tour.