Posted on September 7, 2015 by LBcruiseshipblogger 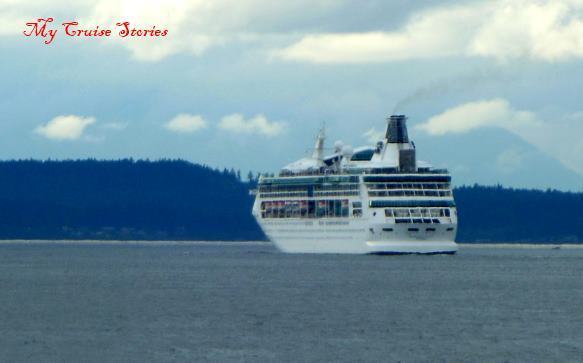 Many Alaska cruises start and/or end in Seattle. Anyone who has some extra time there can find numerous things to see on or near the waterfront. Some attractions are even free, such as the Gold Rush Museum in Pioneer Square. For Alaska-bound cruisers this museum may be of special interest as it ties Seattle to the Klondike Gold Rush in Alaska. 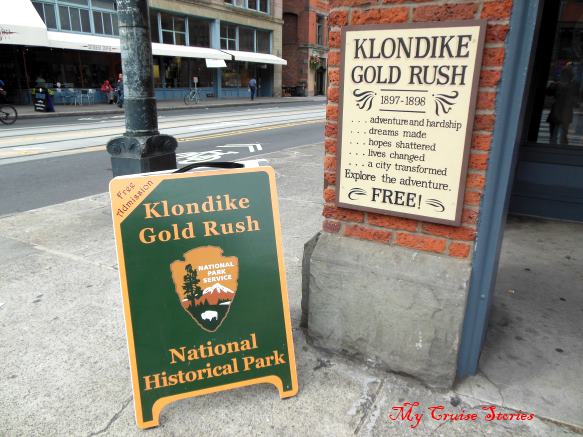 You can learn a lot about the hardships Klondike gold rushers faced at the museum.  What the thousands of people heading to Alaska in hopes of striking it rich did not know when the steamship Portland landed in Seattle in 1897 with 68 miners and a million dollars in gold was that Alaskan locals had already staked their claims all along the gold-bearing creeks. 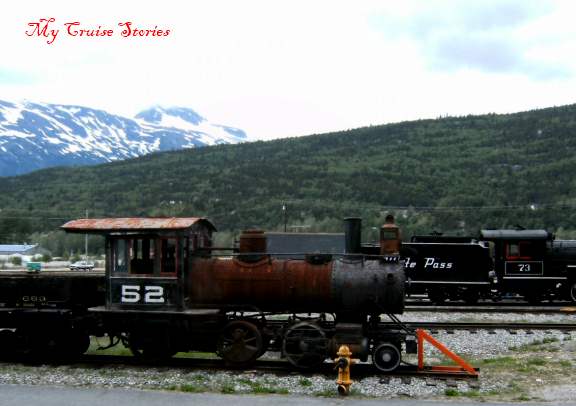 Seattle’s economy got quite a boost from many would-be miners passing through town on their way to Alaska from all over the world. They bought supplies and passage onboard ships. Once in Alaska these gold-fevered hopefuls faced difficult passage over either Chilkoot Pass from Dyea, a long-established Native American trading route at the time, or White Pass from Skagway where cruise ship passengers and other Skagway tourists can now take a ride on the train which was finished too late to help the would-be miners of the Klondike Gold Rush. Nothing remains of Dyea after many people died in an avalanche on the trail there. The trail up White Pass once had the name Dead Horse Trail because people would buy a horse to get their supplies up to the top of the pass and then sell it to the next person until eventually the poor overworked and underfed horse collapsed and died along the trail. Sadly several thousand horses died in the rush to get supplies over the pass.

The main reason people had to work so hard to cross these passes was because the Canadian Mounties would not let them into Canada without 2000 pounds of supplies per person, which obviously one person alone could not carry up the mountain in one trip. Anyone who could not afford to hire help had to make the trip repeatedly. Many did not get over the pass in time to make it to Dawson before winter made traveling impossible. They endured a very cold winter in the mountains living in tents, eating those supplies they worked so hard to get up the mountain. They spent their time building boats while they waited for the river to thaw so they could continue their journey, arriving in Dawson after the spring thaw, too late to stake a claim. Some went home and others worked for people who had claims. More people made money selling goods than mining gold. Only 300 people made a significant amount mining there. Of those only 50 stayed rich for the rest of their lives. The Gold Rush Museum in Seattle is part of the National Park Service. It has two floors of artifacts and educational displays and a movie about the gold rush.

Pioneer Square is more an area than an actual square, but this is a bit of it

It all starts with a toilet. At the beginning of the Underground Seattle tour, everyone gets the scoop on how Seattle’s toilets once flowed in both directions. Early Seattle, in the area now known as Pioneer Square, existed on tideflats and landfills. When the tides came in the water came right up the plumbing and out the toilets. Then came the great fire of 1889. With a large portion of the city burned to the ground Seattle’s early settlers didn’t give up, they started over. Retaining walls raised the streets up to what had been the second story of buildings. New unburnable buildings made of brick and rock rose faster than the streets. New sidewalks added at the raised street level and new doors put into what was once the second story of the buildings left the old sidewalks down below all but forgotten. During prohibition the aging corridors made a great hiding place for those not inclined to obey the new laws. 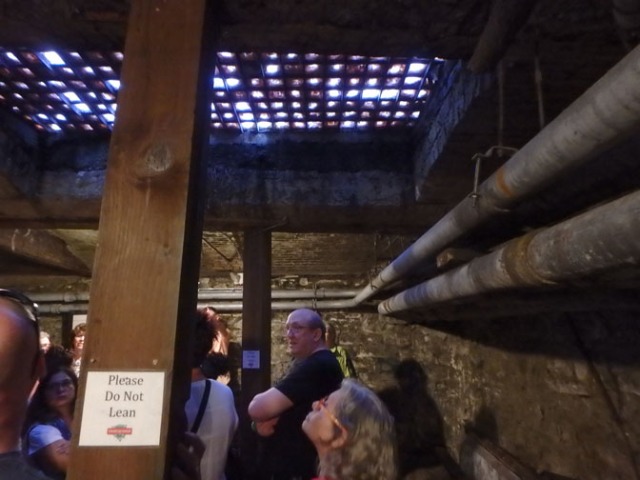 under the sidewalk skylights on the underground tour

Pike Place Market is another one of Seattle’s famous landmarks that almost didn’t happen.  Developers once wanted to raze the building.  Now it is an icon of Seattle, home of the famous fish-throwing fish mongers.  Across the street, visit the original Starbucks. 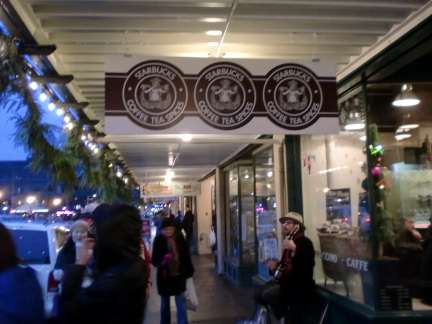 Pike Place Market has shops selling just about everything new, used, or good to eat.  The public market section offers booths of local produce and crafts of all sorts.  A stairway leads from the waterfront level across the street from the Aquarium up to Pike Place Market.

tourists flock to the gum wall

There’s a ramp off to the right nearly at the top of the stairs leading to Pike Place Market.  Following that ramp leads to Post Alley on the right, where the brick wall of an old theater provides one of the grossest unofficial tourist attractions ever.  Very uniquely Seattle, the famous gum wall.  People flock to see or add to these walls with their bright colorful sticky disgusting coating of gum, which in some places oozes off the windowsills. Fallen gum wads sit on the ground next to the wall.  Probably one of the most unsanitary tourist attractions ever.

gum oozes off the windowsill of this old theater

Keep on going down Post Alley and you will come to a garden of metal flowers along a wall.  Follow it even farther and you end up in Pioneer Square.

fish at the Seattle Aquarium

Seattle’s waterfront has many things to see.  The Seattle Aquarium highlights local sea creatures, but has many exotic species as well.  You can even find Nemo there. Ye Olde Curiosity Shop has curious things indeed.  Mummies and shrunken heads among them.  Ferries take passengers across Puget Sound to Bremerton or Bainbridge Island. 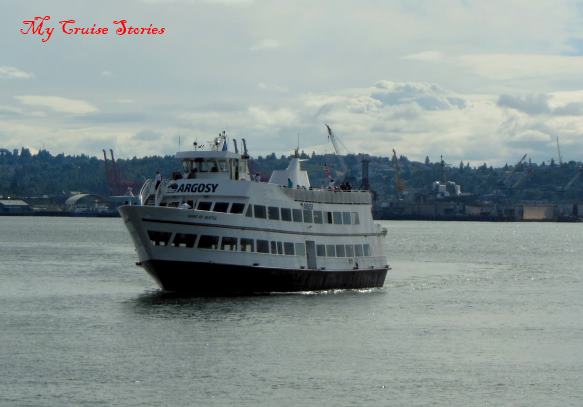 Small local cruise ships take people on day-trips and short harbor cruises around the sound.  Large cruise ships from many major cruise lines start their voyages to Alaska from Seattle’s port.  The Seattle Great Wheel dominates the waterfront view from many locations. 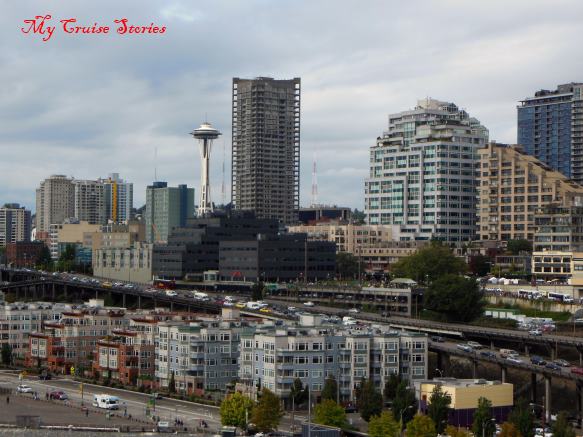 Just up a hill  from the waterfront lies the Seattle Center, a remnant of the 1962 world’s fair.  Home of Seattle’s best known landmark, the Space Needle.  Take a ride to the top and enjoy the view. If your ship is in port you may see it from there. Or enjoy a meal with a 360 degree view in the revolving restaurant.  Discover the history of music, or make some of your own at the EMP (Experience Music Project.) The Seattle Center also has a great science center with lots of exhibits.

Ride the Duck in Lake Union near the Space Needle

Across the street from the Seattle Center near the space needle you can find the starting point for Seattle’s Ride the Duck – an amphibious vehicle that takes passengers on a land and sea tour. It drives down a boat launch right into Lake Union where passengers can see the houseboat from the movie Sleepless in Seattle and maybe catch a glimpse of another uniquely Seattle place, Gasworks Park. Once a gasification plant that turned coal into gas, it’s now now a 19 acre park with much of the old gasworks still standing. 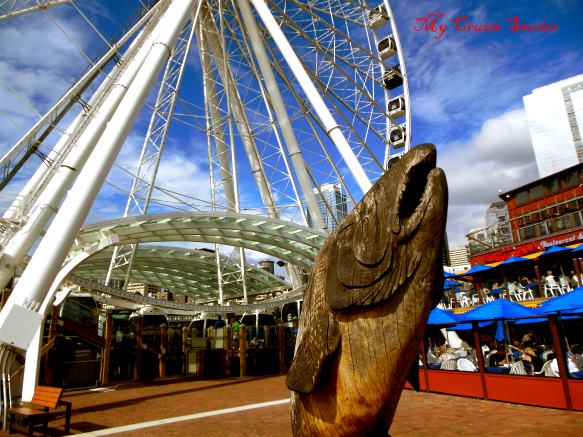 fish statue at Miner’s Landing near the Great Wheel

Things mentioned here just begin to scratch the surface of the many things Seattle has for tourists to enjoy.

MyCruiseStories blog tells stories about adventures in cruising on ships big and small. Things to do onboard and in port. Anything connected to cruising. Also food, travel, recipes, towel animals, and the occasional random blog.
View all posts by LBcruiseshipblogger →
This entry was posted in Port Cities, Washington and tagged Gold Rush Museum, gum wall, photos, Pike Place Market, Pioneer Square, Ride the Duck, Sculpture Garden, Seattle, things to do in Seattle, tourist attractions. Bookmark the permalink.