Posted on February 1, 2019 by LBcruiseshipblogger

In a span of just a few hundred years Glacier Bay went from a fertile valley where native Tlingit people lived in the 1600’s with the Grand Pacific Glacier on high mountain ridges above the valley to completely buried in ice to filled with water. During the Little Ice Age this glacier surged across the landscape covering everything in its path in ice up to 4000 feet thick. In the early 1700’s the glacier reached its peak with a terminal moraine jutting out into icy strait. By the time the first European explorers came with Great Britian’s Captain George Vancouver in 1791 the glacier had retreated 5 miles back into its own newly dug bay. The face of the glacier was an impressive 20 miles across at that time. Just 85 years later when John Muir came by in 1879 the glacier had already retreated another 26 feet back into the bay that hadn’t existed before its mighty surge.

arm of Glacier Bay visited by our ship

Glacier Bay of today is vast national park covering over 5000 miles with a network of fjords and glaciers. The many fjords create over 700 miles of shoreline with inlets leading to a variety of mostly tidewater glaciers. Some of the park’s glaciers are no longer tidewater glaciers, having retreated to the point that they no longer reach the sea. Cruise ships head over 65 miles from the mouth of the bay and up Tarr Inlet before reaching Margerie Glacier, one of the most active glaciers in the park. The ship passes by inlets terminating in other glaciers along the way. The remains of the unglorious and now not so Grand Pacific Glacier that dug the bay in its mighty surge sits in a mostly unnoticed grey flow down the hill next to the blue and white of Margerie Glacier.

Previously on a cruise to Glacier Bay on this very ship (the Westerdam) we went just to Margerie Glacier, but this cruise we went to Johns Hopkins Glacier as well, which someone said the ships could only get to very late in the season. This time we came in October, past the normal Alaska cruise ship season which usually ends in September.

seal on ice near Margerie Glacier

On the way into Glacier Bay the ship picks up rangers much the same way they pick up or drop off pilots coming and going from port – that is from another boat without stopping or going to shore. The rangers spot wildlife and provide narration and education throughout the journey through Glacier Bay, which can be heard in the Crows Nest Lounge observation room or on the outside portion of the Promenade Deck. I went up to the Crows nest to see the Rangers on the off chance one of them might be a former 4-H kid from back when I used to be leader of a 4-H horse club, who is now a forest ranger stationed in Alaska. He wasn’t there, but the ones who were there knew him and said they’d deliver a note.

Our ship first went to Margerie Glacier. Here they served their traditional pea soup, which Holland America ships always have on glacier day on Alaskan cruises, but which I had not tried before this cruise. They open up the big deck 4 bow for scenic cruise times such as glacier watching, which is where they serve the soup.

passengers on the bow near Grand Pacific Glacier

They also open up small bows on decks 5, 6, and 7 on ships of the Westerdam’s class, which is where I usually go for glacier watching. Far less people know those decks are open since they rarely announce it so there isn’t such a crowd. This time we went to the deck 4 bow for Margerie Glacier so I had a chance to try the pea soup, which tasted delicious, and helped to warm me up a bit for the short time it took to eat it.

I packed long johns this time because on past cruises I’ve always wished I had them for glacier watching. This time I was definitely glad I wore them, but it was so cold a ski mask might have been nice too. Margerie Glacier seemed smaller than I remember it from several years ago. Most glaciers are in recession these days. Possibly it also looked smaller to me because the last glacier we saw prior to this cruise was the far more impressive Hubbard. Comparing pictures from this trip to the previous one though, it does look like a bite has been taken out of either side of the face of the glacier now where it was straight across on the last visit and most of the black area was gone.

cormorants on a bergy bit

On the way into Margerie Glacier we saw a seal sitting on a bit of  ice. Also lots of seagulls, an eagle, and one bergy bit full of cormorants. A bergy bit is a very small iceberg – perhaps a bit of what was once a larger iceberg. 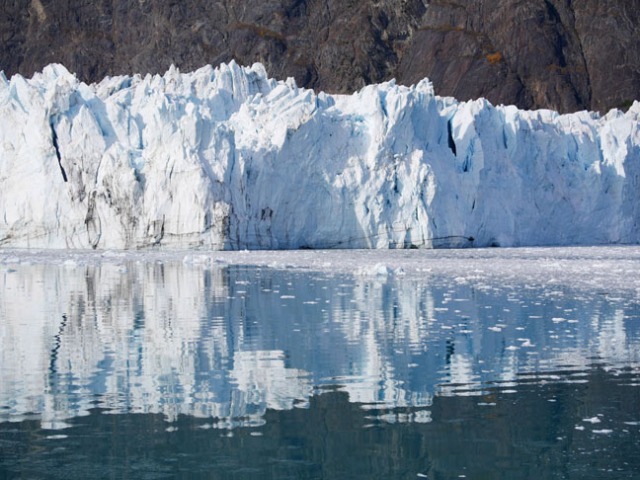 After doing a slow full spin at Margerie so everyone on board regardless of where they chose to glacier watch had a chance for a view the ship moved on to Johns Hopkins Glacier. The day warmed up by then and it was actually quite pleasant outside with long johns and a jacket, though the position of the sun in regards to the glacier made it hard to get good pictures there. 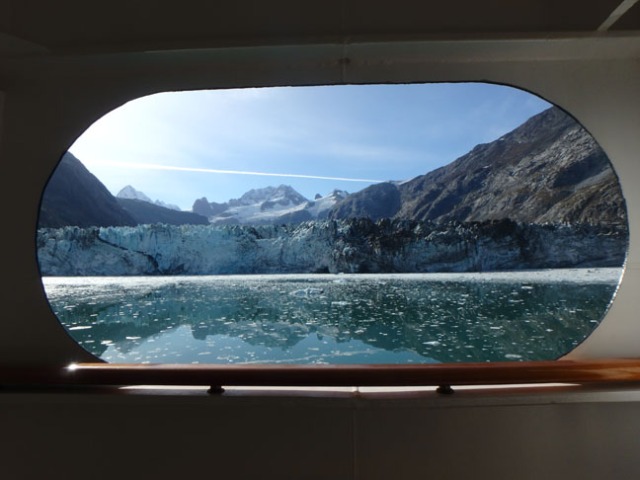 It probably also helped that I didn’t go out in time to get a good position on any bow so I went to the promenade deck instead, which had plenty of room to stand by the rail and watch the glacier calve a few ice bergs with a loud crackle. The promenade deck is a bit more protected than the open bow, especially from wind caused by ship movement. Hardly anyone went there so I had great views and lots of options of where to stand and see the glacier.

Johns Hopkins Glacier was bigger than Margerie. It had an ice berg sitting out in front of it that was big enough to be grounded in the area between ship and glacier rather than floating like the many smaller bergy bits. The glacier had a whiter half and a dirtier half, the dirty part of which had a couple ice caves at the waterline.

The face of the far smaller Gilman Glacier sits right next to Johns Hopkins and calved far more actively than its larger neighbor while we were there.

One advantage of having purchased the thermal suite this cruise is the view from the heated ceramic chairs. We went up there for a bit while still in glacier bay and saw the tail end of our time at Johns Hopkins as well as seeing a few more glaciers along the way as the ship traveled back toward the mouth of the bay. 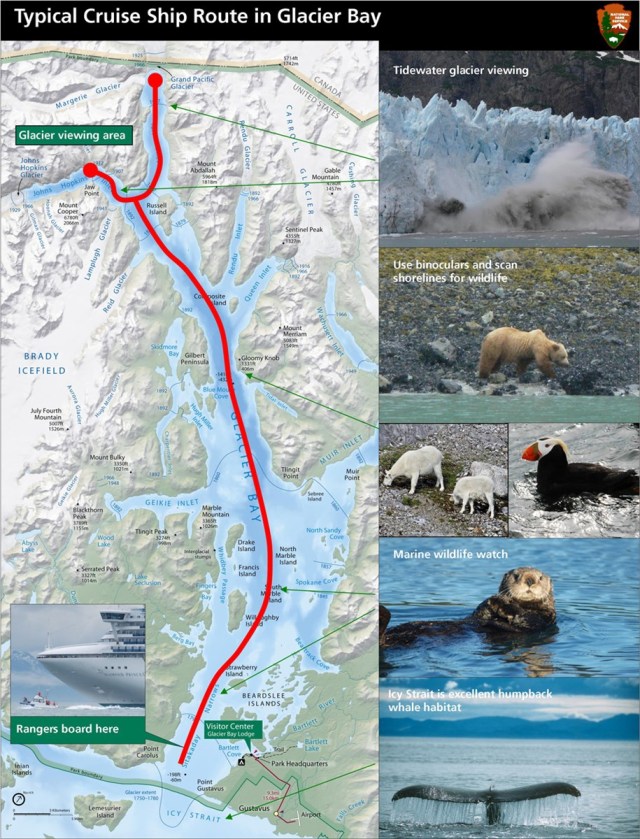 we went farther down the inlet to Johns Hopkins Glacier than what this map shows.