Posted on May 25, 2018 by LBcruiseshipblogger 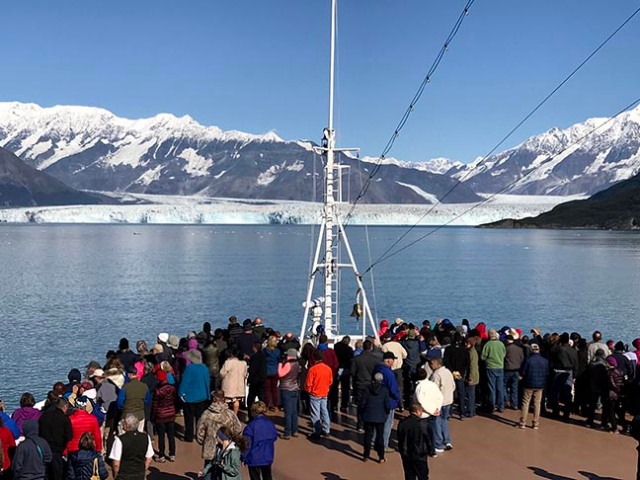 Most Alaskan cruises visit a glacier somewhere along their itinerary. Often they either go into Glacier Bay or cruise down to the end of Tracy Arm (or Endicott Arm when Tracy gets blocked). Not so many go to Hubbard Glacier. It’s beyond the usual path. A ship on a 7-day round trip out of Seattle or Vancouver has to go out of their way to get there since Skagway is the farthest north one-week round trip cruises usually get. If you can find a ship that goes there the extra distance is so worth it. The glacier’s 6-mile-long face at the waterline makes for quite a spectacular view.

Hubbard is the biggest tidewater glacier in North America. It is 76 miles long and 1200 feet deep. It calves pretty actively so in the time a ship spends near it seeing large chunks of ice fall to the sea is quite likely. Though the Holland America Oosterdam stopped a mile and a half or so away this glacier is so impressively vast it seemed like we were right next to it. In fact though it took quite some time to travel through Disenchantment Bay to get to the glacier it loomed so large at the end that it seemed as if we were nearly there for quite a long time before we actually arrived.

In comparison, Margerie Glacier where the ships go in Glacier Bay is just a mile wide and extends only 21 miles up the mountain making it less than a third of Hubbard’s size. The face of Dawes Glacier at the end of Endicott Arm is just half a mile. I couldn’t find dimensions for the South Sawyer Glacier at the end of Tracy Arm, but maps of it and Hubbard show that Sawyer is considerably smaller. Sawyer is the only one of these I haven’t actually seen. I’ve taken two cruises scheduled to go down Tracy Arm and both were early season cruises that ended up in Endicott instead. Tracy Arm is narrower and sometimes blocked by ice bergs.

While most of the world’s glaciers retreat at alarming rates including those most often seen by cruise ship passengers, Hubbard is one of the few that is actually advancing. It joins with nearby Valerie Glacier about 6 miles before they reach the sea.

Glacier watching is cold business, so if you go be sure to dress warmly. We always end up  somewhere on the bow as the ship approaches at..well what feels like glacial speed. Probably the coldest place on the ship to be, but you can’t beat the view. If you’re standing at the bow for long and not wearing long johns you’ll probably wish you were. On the Oosterdam we staked out a spot right at the center of the balcony of deck 5, which they open along with the ones on 6 and 7 any time they open the big deck 4 bow area where most passengers go for scenic viewing.

These decks are normally closed to passengers, but they open them up for scenic places like glacier viewing or sailing into San Juan, Puerto Rico. Deck 4 is significantly bigger, and its opening well announced so it tends to get crowded there. They may or may not announce that the 3 decks above are open so it’s a lot easier to find a good place to stand there. We prefer to stay out of the crowd and knew from previous cruises on this class of Holland America’s ships that the other decks would open along with deck 4 so we headed straight up to deck 5. We were all alone up there on the Oosterdam until somebody made an announcement about the 3 other decks shortly before we reached the glacier. It got a bit crowded then, but we already had the prime spot having staked it out all throughout the long cold journey through Disenchantment Bay. I’m not sure why they call it that since it leads to Hubbard Glacier which is really quite enchanting. 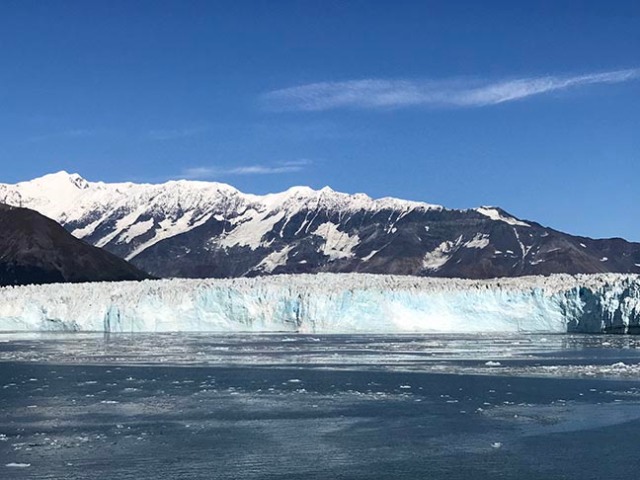 Hubbard Glacier had smoother edges between the rougher ones

On the whole way in a couple crew members wandered about down on the bow of deck 4 announcing loudly and often that they had coffee and hot chocolate for sale in souvenir mugs. They didn’t make a whole lot of sales throughout the journey to the glacier so they might have been as annoyed by having to try and peddle things as the passengers were by their frequent announcements breaking into the otherwise peaceful feeling of a wild place with such beautiful scenery. Then again it might have been a way for those particular crew members to get outside and see an awesome view they may not otherwise have the opportunity to see so perhaps they didn’t mind. When they changed their announcements to free pea soup about halfway through our time at the glacier they got a better response from the crowd. We missed out on it though. We didn’t want to lose our spot on the deck above and being about halfway between breakfast and lunch time we weren’t hungry anyway.

small bergy bits near the glacier

We didn’t see much in the way of wildlife, but there were lots of bergy bits floating about in the water and a few of the little ice bergs had birds on them. Probably with cold little birdy feet. There were also a few porpoises swimming around the bay, but not within range of my little pocket camera.

Once the ship finally finished its long slow journey up the scenic channel to the glacier it stopped and did a slow 360 turn over about an hour which gave everyone on the ship a chance to get a good view of it no matter where they chose to stand. Quite handy if you have a balcony cabin because you can stay warm in your own room until time to step out for the fantastic view. Or go back in and warm up periodically if you spend part of the journey there outside. Of course you miss out on that forward view on the way there if you stay in your room, but then again you can come and go from public areas without losing your place on your own balcony. We had an inside cabin this cruise and couldn’t find our friends that had a balcony cabin before the ship headed toward the glacier so we found a spot outside and stuck with it.

sailing away leaving Hubbard Glacier in the Oosterdam’s wake

Hubbard is by far the most impressive of all the glaciers I’ve seen. I’m really glad to have taken a cruise there.

MyCruiseStories blog tells stories about adventures in cruising on ships big and small. Things to do onboard and in port. Anything connected to cruising. Also food, travel, recipes, towel animals, and the occasional random blog.
View all posts by LBcruiseshipblogger →
This entry was posted in Alaska, Holland America, Oosterdam, USA and tagged Alaska, Alaska glaciers, cruise, cruise to Hubbard Glacier, giant glacier, glaciers, Hubbard Glacier, photos. Bookmark the permalink.