Posted on October 28, 2016 by LBcruiseshipblogger 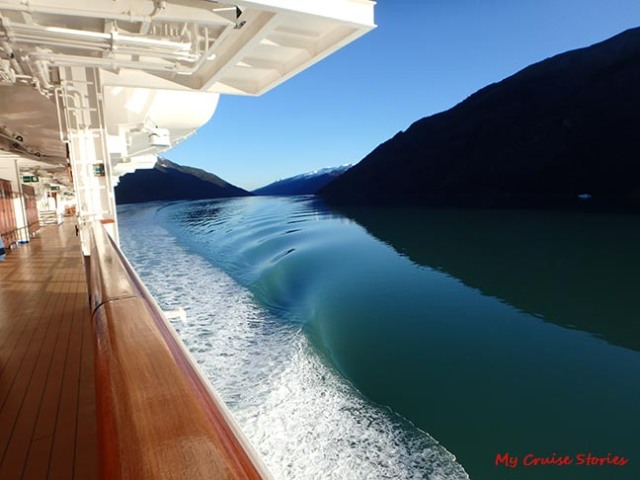 How many cruises to Tracy Arm do you have to book before actually cruising through Tracy Arm? I don’t know the answer to that, but for me so far it is 0 for 2. Years ago I took a cruise to Alaska on the Norwegian Sun with my son and grandson and when the time came to go to Tracy Arm it went through nearby Endicott Arm instead. When I booked the Alaska cruise on the Ruby Princess with my sisters I thought this time I would get to see Tracy Arm. 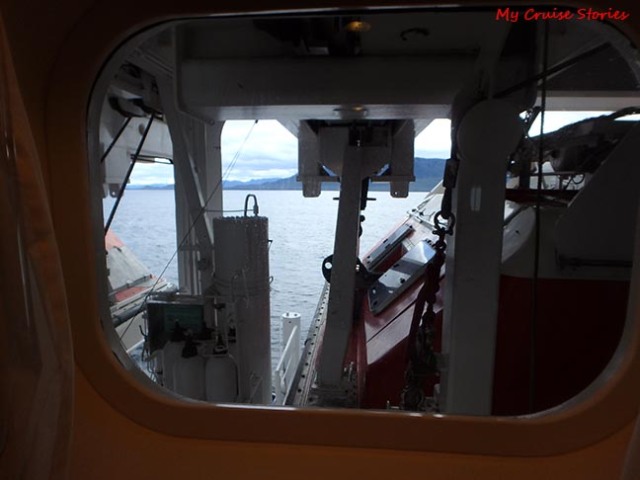 view from the oceanview obstructed room

Our trek through the fjord began quite early in the morning. Looking through our peek-a-boo view between the lifeboats through the window of our oceanview obstructed room, we saw a glacier high upon a hillside, met with all the hilarity of seeing Sumdum Glacier. What can I say, we’re easily amused. We did not yet know we hadn’t gone to Tracy Arm, but Sumdum Glacier sits high on a hilltop visible from both fjords, though from the look of the map Tracy Arm probably gets a better view.

Soon the announcement came saying we had entered Endicott Arm due to a blockage of the entrance of Tracy Arm by a number of ice bergs. Narrow as Endicott Arm appears from a large cruise ship, it’s considerably wider than Tracy Arm so often navigable when Tracy Arm is not. We bundled up, though not warm enough as none of us had brought long johns. We went to the open area at the bow on the upper promenade deck. Glacier watching is cold business and the front of the ship offers no protection from wind, but the sights are worth the chill. We picked a great spot at the center of the bow where we could see both sides of the fjord, having first pick of where to stand since we got there before anyone else. Not many people braved the chill of the upper promenade so we had great views and no crowd for the whole trip through the fjord.

As the ship passed Ford’s Terror their naturalist explained how it got the name when an early explorer rowed into the narrow channel on a slack tide and got stuck in a panic for 8 hours when the tide came in bringing heavy currents with it. Not knowing he could row to shore and wait out the tide for a more favorable current, he spent the whole time terrified, wearing himself out trying to paddle through the rough seas to get out of the small inlet.

The ship reached Dawes Glacier at the end of the fjord as the sun rose over the nearby peaks which makes for a lovely scene that is as hard to look at as it is to take photos of. We took a ton of photos in the hope that at least one would turn out as a decent glacier shot and not just blinding sun washing out the photo. We got a few usable shots, but nothing really clear.

After sitting awhile by the glacier the ship made a slow 180 degree turn, quite a feat since it had not much space on either end. As it pulled away we made our way to the stern, which was much more crowded, but far less cold since we now had the ship for a windbreak as well as the sun.

We went to Alaska and saw Sumdum Glacier

Later we sat awhile on the lower promenade deck watching the scenery go by until we got back to Sumdum glacier. We did not see any wildlife through the fjord other than sea lions on a bergy bit that quickly scrambled out of site before the ship got close enough for us to see what it was. People on a higher deck got photos of them hiding behind the ice.

Dawes glacier looks like somebody drove up it with very dirty tires leaving parallel tracks running through the center. A lot of glaciers have dirty lines like this, which are called medial moraines. Two glaciers coming together form these lines with the dirt and debris that once was the lateral moraine of things collected along the edge of each glacier meeting in the center. Glaciers also have a terminal moraine which forms at the farthest point the glacier ever reached. All the rocks and debris left there can make quite a high ridge in tidewater glaciers. Icebergs often get grounded there, while the face of the glacier could be miles away and getting farther all the time as it recedes. The bar at the entrance to Tracy Arm where ice bergs congregated preventing us from going there is the terminal moraine for Sawyer glacier, which dug that channel.

1 Response to Cruising through Endicott Arm