Posted on September 21, 2018 by LBcruiseshipblogger 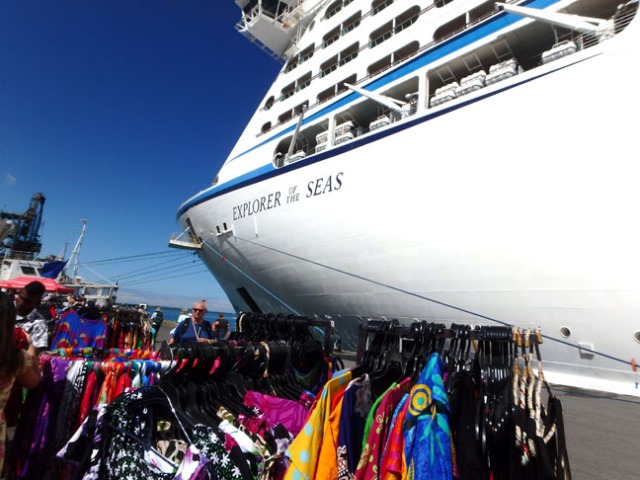 Explorer of the Seas in Lautoka, Fiji

Officially known as the Republic of Fiji, this south pacific island nation consists of over 300 predominantly volcanic islands plus another 500+ smaller islets, mostly uninhabited. 87% of the population lives on the two largest islands, Viti Levu and Vanua Levu. About 3/4 of those live on the coasts of Viti Levu, which is also the island with both Fijian cruise ports we visited. We had one port stop in Suvu and the other Lautoka. Lautoka is sugarcane country while Suva is the capital and Fiji’s main cruise port. Nadi with its international airport is found on Viti Levu and has lots of resorts due to the proximity of the airport. Tourists also flock to the Mamanucas islands near to Nadi. Tourism, tapioca and sugarcane are currently Fiji’s main sources of income. 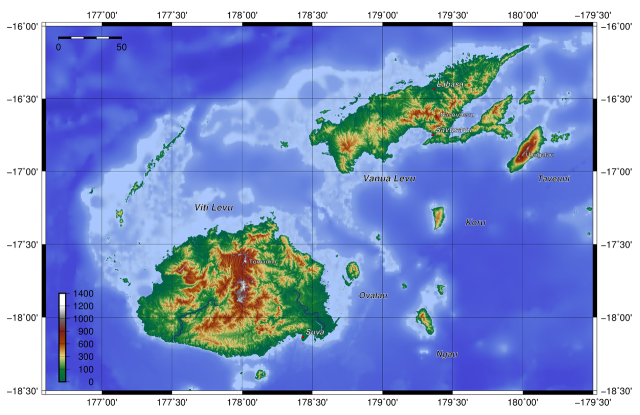 map of Fiji from Wikipedia

Historically the inhabitants of Fiji were cannibals, but not anymore. Fiji has a tropical marine climate with the warmest months from November to April and coolest from May to October, though with a 72 degree F average temperature for the cooler months they aren’t exactly cold. Rainfall is heaviest during the warmer months. Cyclones hit about once a year. 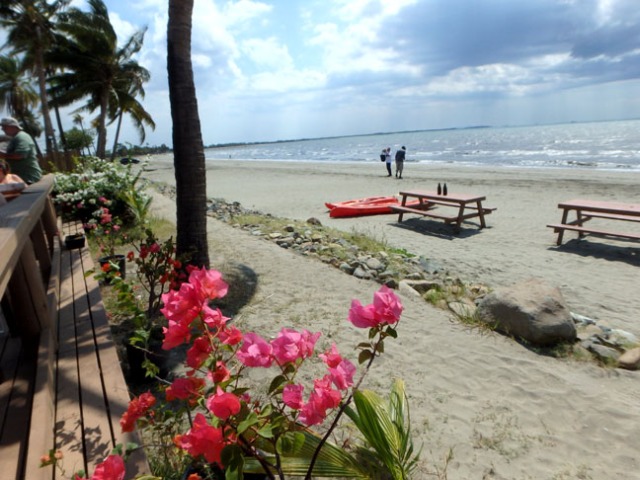 Sandy beaches, coral reefs, tropical weather, and islands with crystal clear water are the main tourist attractions. Currency is the Fijian dollar, but American and Australian dollars are widely accepted there as well. 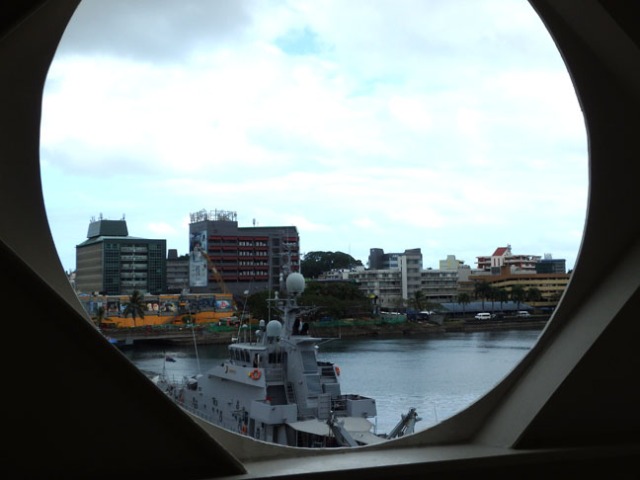 view of Suva from a cruise ship

Fiji’s largest city, Suva, is a metropolitan area with restaurants, shopping, museums, parks, gardens, historic buildings and nightlife. Lautoka is the second largest city. Its main employer is a sugar mill. Lautoka has markets, uncrowded beaches, and an international selection of restaurants.

Mainly a container port, Lautoka gets about 4 cruise ships a month. Fijian music and dancers greet the cruise ship on arrival. Look for them from the ship because they stopped as soon as passengers began to disembark. They performed again late in the day while a line of people waited to board, bringing some of the crowd in to dance with them. A tip jar sat nearby in hopes passengers had not spent all their money on shore and had a bit to spare for the entertainment. 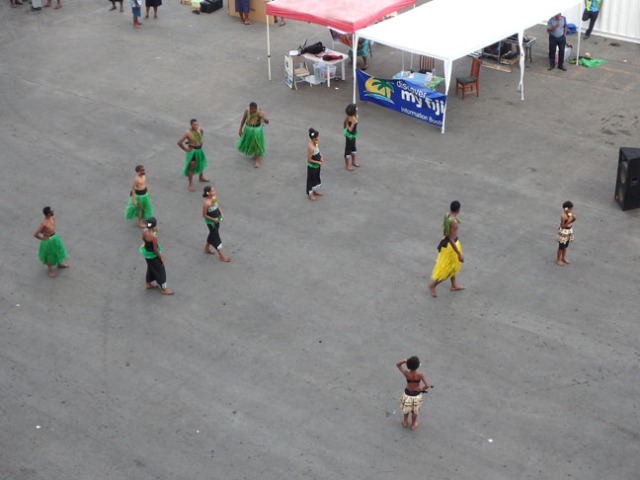 There was a line of booths set up across from the gangway. At the end closest to the ship they all offered same day tours. Most had an island tour in a bus or a boat tour to another island for beaches and snorkeling. Standard prices in Australian dollars ran fairly close to the same from one booth to another, though some had better discounts for American currency than others. At some the price was set, but others were open to haggling for a slightly better deal. Some of these booths also offered things like massages and hair braiding. 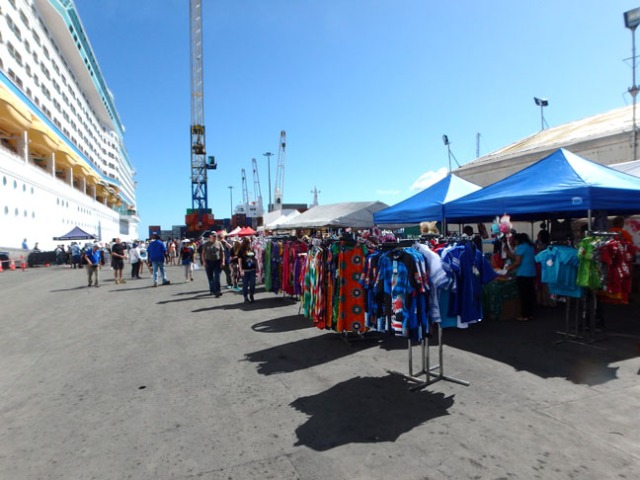 booths at the dock by the ship in Lautoka, Fiji

At the other end of the line the booths had a variety of things for sale. Beyond that there was a booth next to the ship for people on ship’s excursions to gather in. 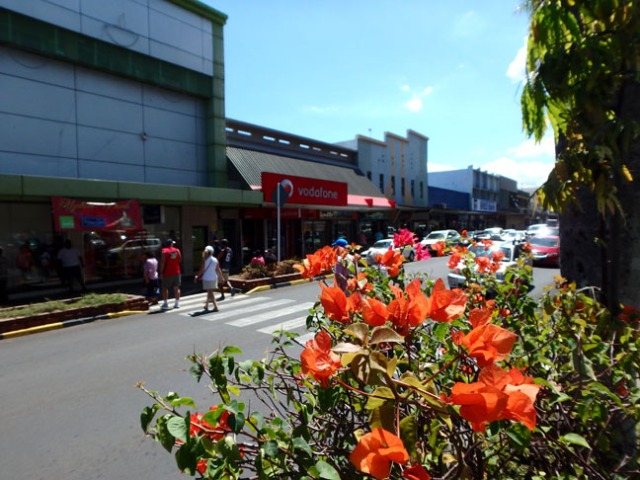 Lautoka near the shuttle and tour bus stop

Pre-cruise research online came up with different sites saying town was ½ mile, 1.4K (which is nearly a mile), 2.5 miles, and 4 miles away. The shortest estimate was probably to the edge of town where it looked like some sort of flea market going on in a field with lots of different booths. The shuttle stop was a bit farther in, near lots of stores. Probably closer to a mile or two. 4 miles was definitely an overestimate. 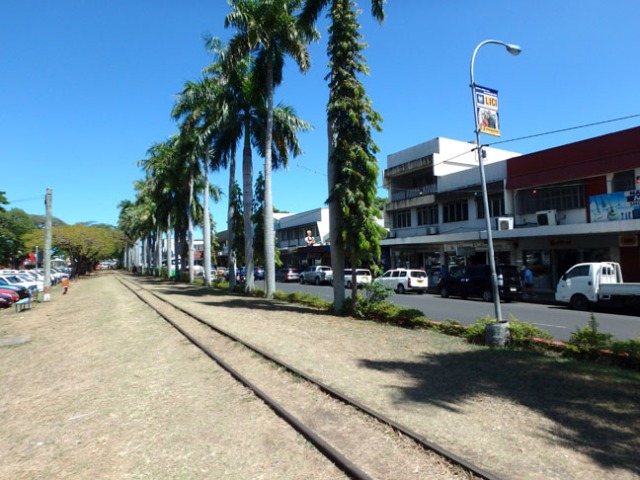 Our ship sold shuttle tickets into town at $9 for the day. They pushed for people to buy them in advance so they wouldn’t have to wait in line on port day. Of course anyone buying shuttle tickets in advance would be out that money if they decided to take a tour instead of just going to town. Cruise ship excursions and tours booked at the booths in the port all left right from the port with no need for a shuttle to town. The shuttles would mainly be useful for people who just wanted to shop or stay near the port. The tour bus did add some people at the first stop in the shopping area where the shuttles stop, but unless they wanted extra shopping time those people could have saved money by taking the tour straight from the port since they wouldn’t have had to pay for the shuttle to town as well as the tour that way. 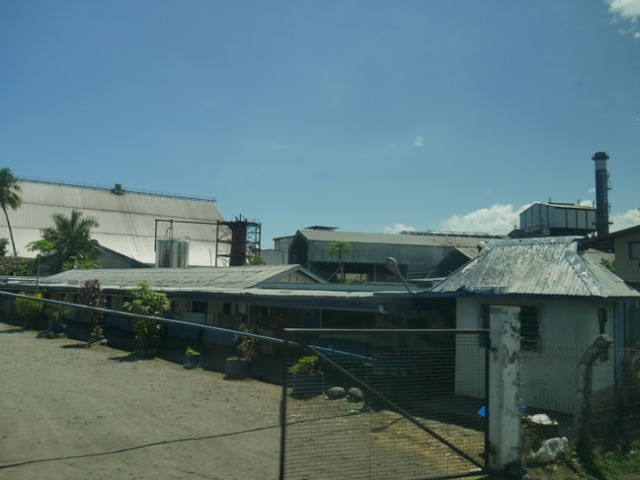 There’s a sugar mill quite near the port. Many places used to grow sugar cane. Fiji still does. Narrow-gage railroad tracks parallel the road throughout much of the island for bringing sugar cane to the mill at harvest time. Sugar is not the mainstay of Fiji’s economy it once was having been overshadowed by tourism and tapioca, but it is still an important crop. 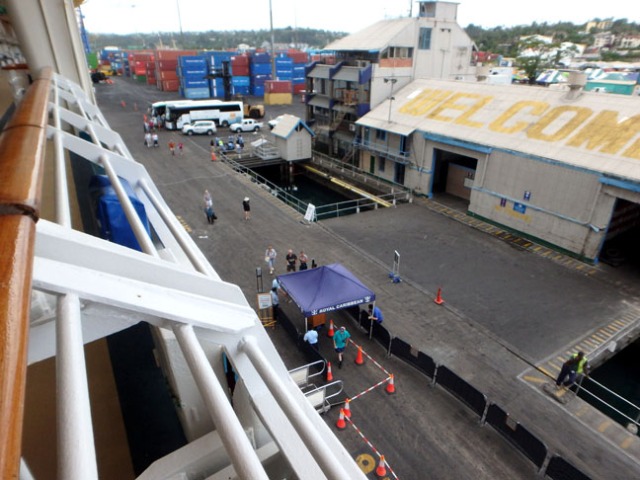 photo of a welcoming warehouse from a ship docked in Suva

Fiji doesn’t see enough cruise ships to build terminals especially for them so even in Suva cruise ships dock in a container port, this fact only made more obvious when getting funneled through a warehouse between the gangway and port exit. 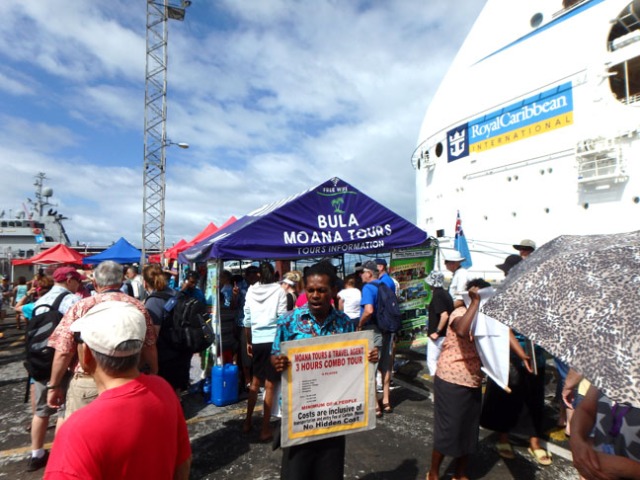 booths at the Suva cruise dock

Like Lautoka, Suva had a number of booths set up on the dock selling sightseeing tours and transportation to beaches. The sightseeing tours normally include a stop in a local village, but on Sunday all the villagers go to church so if your port stop is on Sunday with a last minute tour you miss out on things like firewalking and Kava ceremonies that happen there. Which means if you find the right provider you can negotiate a better price. Missing out on the Kava could be a bonus though. We tried that local drink at a Fijian village next to a resort we stayed in once and it’s definitely something I’m happy to do without. Ship’s tours still included a village visit.