Posted on September 14, 2018 by LBcruiseshipblogger 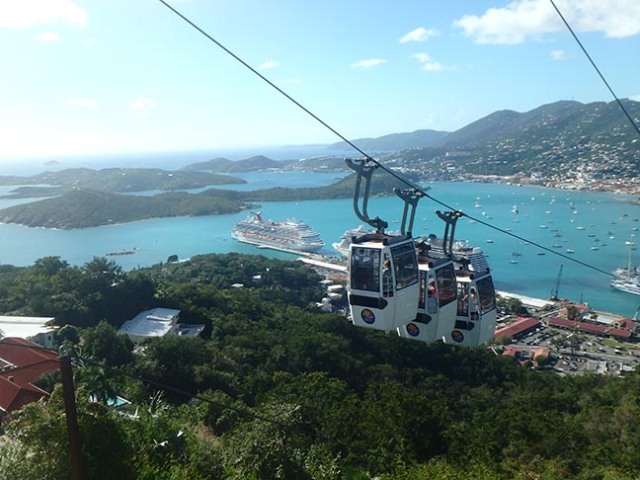 After having looked up the weather before our Carnival Magic cruise and seeing a prediction of rain for all four ports, we were quite happy to see sunshine in the forecast when time for the actual cruise came. Our second port was Charlotte Amalie on Saint Thomas, US Virgin Islands – a place we had visited once before. On that visit we took an island tour and then a quick trip to Paradise Point on the skyride before going back to the ship. At that time we saw a ferris wheel, a trail, and all sorts of animals at the top in addition to the shops and restaurant.

Traveling with a group of 9 this time, we thought walking to the skyride and taking a trip to the top would make a fun day for all since there was quite a bit to do up there. The lower tram station is a short walk from the cruise ship dock. We bought tickets on the ship, which cost a bit less than buying them at the ride. On the way there we noticed the mountain top looking freshly dug up. Several taxi drivers stopped in hopes of getting us to take a ride to the top with them. They said driving a carload of people to the top costs about the same as one skyride ticket. They all said the cablecar down was still free. 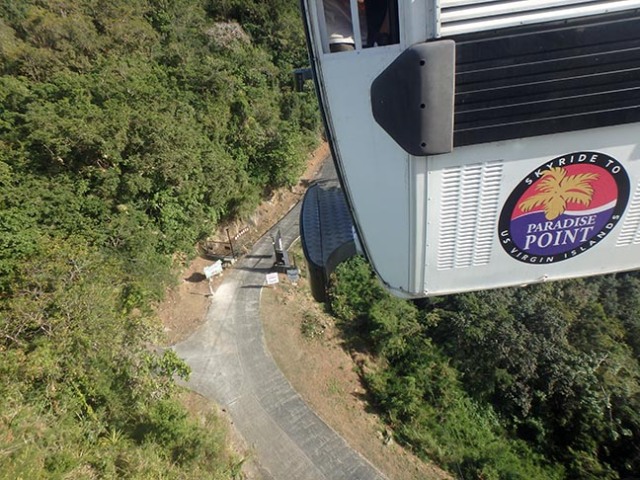 skyride over the new road

We’d already bought tickets and took the skyride up. Even if we hadn’t already had tickets the whole point was riding in the gondolas rather than getting to the top and there’s nothing special about riding in a car. The road to the top all the taxi drivers mentioned hadn’t been there on our previous visit. People had to walk up or use the skyride then. 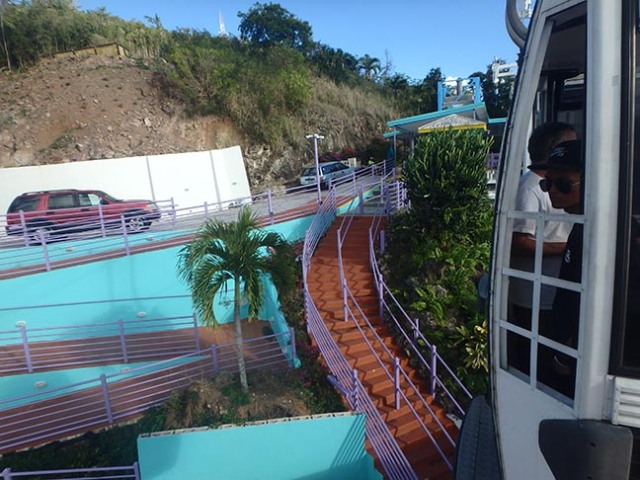 That wasn’t the only change. Everything that had been above the skyride on our last visit was gone. No viewpoint, trails, or animals. The place where the ferris wheel once sat off to the side and a bit below the upper tram station was just an empty concrete slab. It seems someone was more interested in bringing customers to the restaurant and shops than in providing any sort of entertainment for visitors – which translates to less reasons to bring a family up there.

We looked around the shops a bit and thought the one selling stuff from shipwrecks was the most interesting. In one shop a teenage boy accidently knocked a rather expensive Christmas ornament off a shelf and broke it. His parents had to pay for it. Luckily none of the kids in our group broke anything. 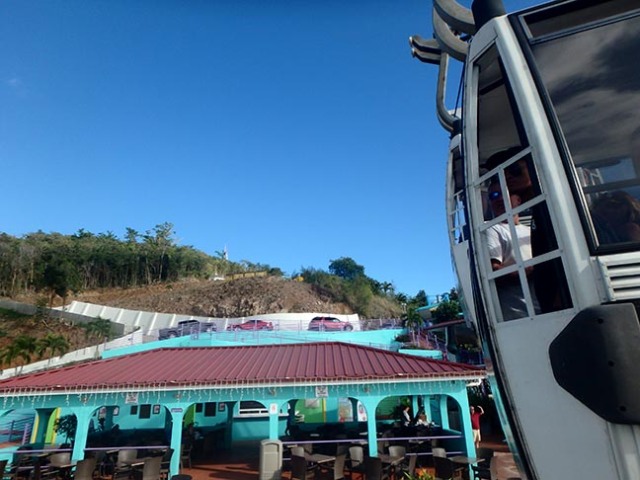 restaurant view from the skyride

The open-sided restaurant had a patio area extending beyond the roofed part. We walked to the far end to see the view off the terrace. The views are still spectacular up there and there’s plenty to eat and drink. Other than that there wasn’t much to do so we would have looked elsewhere for a way to entertain youngsters if we had known all the other things were gone. 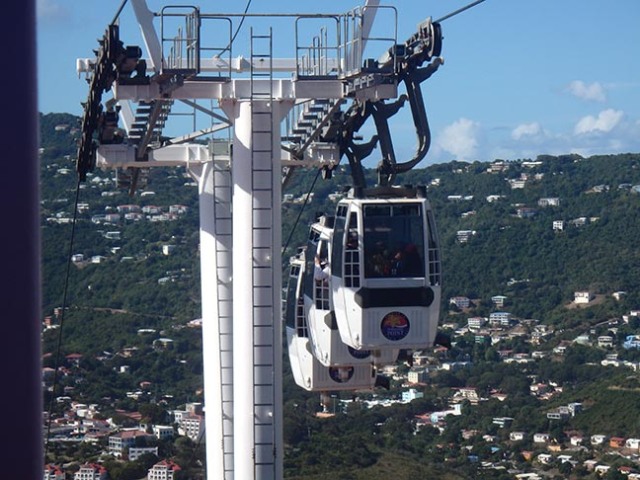 skyride coming up to the top station

There seemed to be more shops down on the level below where the skyride stops this time, though I may have just missed them last time since we hurried back in a downpour after checking out the things that no longer exist and didn’t look around the shop and restaurant area much that time. 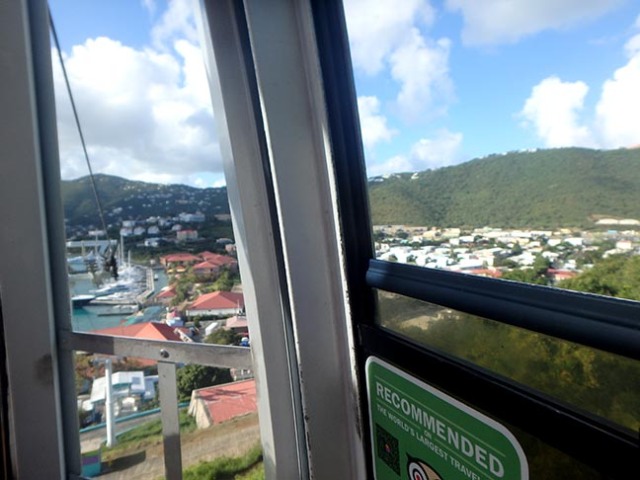 Saint Thomas has lots of shops and places to eat near the cruise terminal, but there isn’t much else to do there without taking some sort of transportation to get elsewhere – which is available at the port. 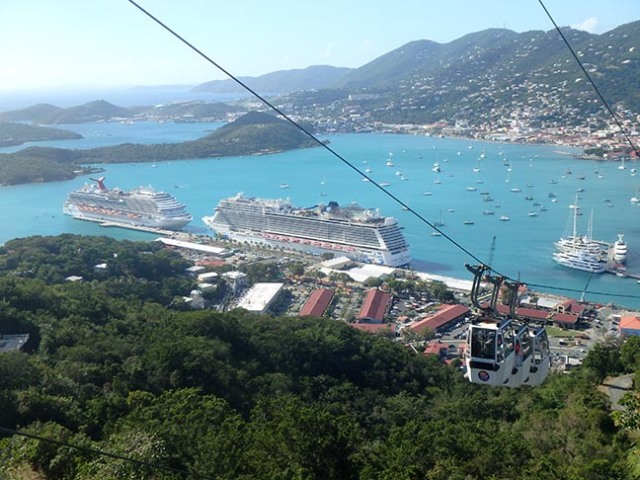 view of skyride, cruise port, ships, and beyond from Paradise Point

Most of the ship’s excursions on Saint Thomas involve water sports or beaches, but there are a few other things like scenic drives, a zip line, or an ice bar.

2017’s Hurricanes Irma and Maria caused extensive damage to the tram, buildings, and road. It stayed closed for several months for repairs which included all new cables and is back up and running again.