The Rock of Gibraltar

Posted on August 31, 2018 by LBcruiseshipblogger

Carnival Vista – photo taken from the Rock of Gibraltar

We got off the Carnival Vista in Gibraltar expecting to make our way to the Gibraltar cable car, ride it to the top, and then walk down where we would see the siege tunnels, monkeys, and cave on the way back down. Exiting the ship through the port area we found taxi vans offering tours to the rock, and (for a higher fee) beyond. The information desk said it was about a 20 minute walk into town and about 45 minutes walk to the bottom of the cableway. There were taxis willing to take people to town, but we couldn’t find one that would go all the way to the cable station so we set out on foot.

most of Gibraltar is the rock

In town we found a bus station where you could get an all day pass for very little money. Being a British colony the official money in Gibralter is the British pound, but since Gibralter is just a little point of land attached to Spain they are just as happy to take euros. We were able to save some time by taking the bus to the cable car station rather than walking.

Runway with the road from Spain to Gibraltar passing through it

While the rock dominates any view of Gibralter as well as a large amount of its small land mass, its other notable feature comes in the form of a runway which runs the length of the boarder with Spain – and beyond as it juts out into the water with nothing else around it on one end. This runway is quite unusual in that the road from Spain to Gibralter runs through it and has to be shut down any time a plane takes off or lands.

When we got to the lower cable station one cable car was on its way down. Before we even got inside to buy tickets all the people who had been waiting there came out saying it was closed due to the wind. Apparently the car coming down just had someone on it who worked there testing out the weather. He decided it was not safe to run so that was no longer an option for getting to the top. An empty taxi van went by so we hailed it, followed by way more people than it had room for, though one extra couple tagged along with our group of 5, which included 3 friends from the ship as well as us. More taxis came up behind ours so they must have got word that the cablecar wouldn’t run that day.

runway view from the ship – with an airplane on it

The taxi van offered the same tour of the rock that we could have gotten at the port. It’s only an hour and a half tour. We wanted more time to see everything which is one reason we would have liked to take the cable car up and walk down. Since that was no longer an option we took the taxi. Some people do walk up, but it’s a long steep walk and for some in our group the walk down would have been a challenge and walking up out of the question. With the cable car closed for the day the taxi was our best bet. 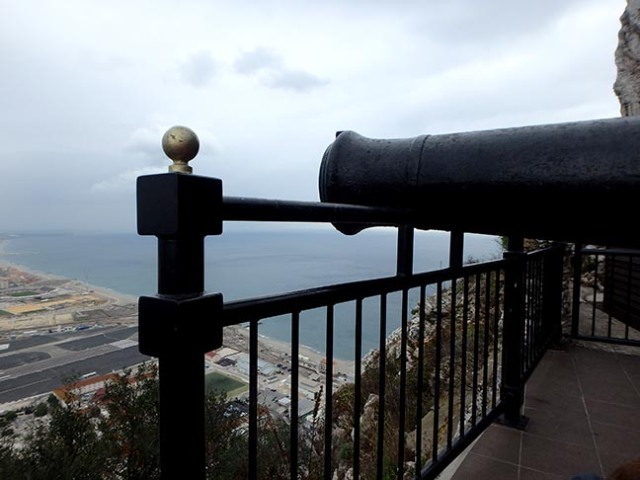 cannon near the entrance to the siege tunnels

Our taxi driver said that Gibraltar has more jobs than people to fill them so thousands come over from Spain each day to work. The per capita income average in Gibraltar is nearly twice that of Spain. Like Malta, in Gibraltar we saw none of the graffiti, litter, homeless people, beggars or stray animals found in most places of the world. 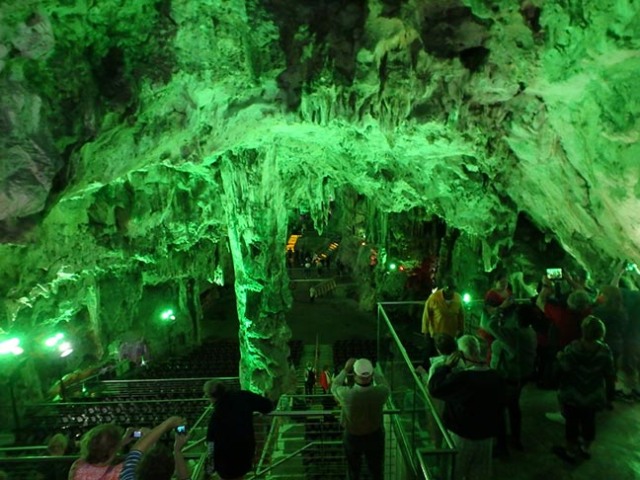 We made a brief stop partway up where you can see Africa (Morocco) just 14 miles away across a channel, but it was pretty hazy in cloud cover so not a great view that day.  Then we went inside St Michael’s Cave. It’s a huge natural limestone cavern with lots of impressive stalactites and a whole network of caves.

There are lights in ever-changing colors shining on the rock formations so you don’t see the true natural beauty of the cave. Some colors turn out better in photos than others. With my camera the rock formations came out clearer in blues and greens than in pinks and purples. Perhaps if we had more time to explore we could have found a more natural looking area. There was a stairway going down deeper into the cave, but we didn’t have time to go there due to the taxi tour’s time limit. I may have been the only one in our group who would have liked to explore further anyway. My kids and I are into caves, my husband and the friends we were with that day not so much. If either of the kids had been there I’d have had someone to take the option to bail from the taxi at the top and walk down the rock with, but nobody else in our group that day wanted to. 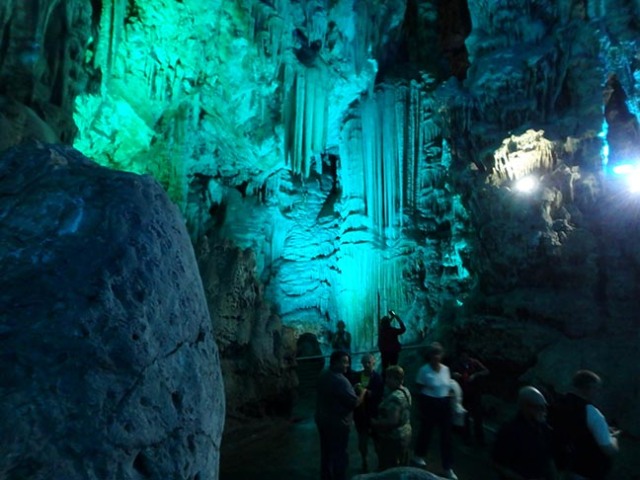 The cave was created by rainwater seeping through the limestone, gradually dissolving the rock over thousands of years. It also has a lot of human made additions. Besides the pathways and lights that change colors over the cave walls, it has an area with seats for concerts sometimes held there to take advantage of the natural acoustics of the cave.

concert hall in a cave

Sometimes monkeys hang around near the cave exit, but sensing an impending storm none were there that day. The building where you enter has a restaurant, gift shop, and free bathrooms. In Europe a lot of public bathrooms charge a fee to get in so it’s always nice to find a free one.

mama monkey and her baby

Our driver said the monkeys are descendants of Barbary apes brought over from Africa  decades ago. They keep the different family groups from foraging too far and fighting over territory by adding fruit to their diet and feeding each group in separate areas so they stay in their own space. As we approached a monkey feeding area the driver panicked over a passenger opening a granola bar and told her to put it away or we’d have monkeys in the van. They are a species of macaque from Morocco.

Barbary ape at a feeding station on the Rock of Gibraltar

Feeding stations alongside the road on the way up to the siege tunnels attracted a large group of monkeys. Some were in the feeding area eating the fruit there, others sat on the roadside or climbed outcroppings of rock. Several babies ran and jumped from tree to tree in the bushes growing at the top of the rocks towering over the roadway.

A row of taxis stopped and let people out for monkey photos and to climb a stairway to a viewpoint. Some monkeys hopped on top of the barely moving vans. As each van worked its way to the front of the line the people got back in and it moved on. Passengers had to stay aware of where their van was in the line so they would return when it got to the front and not stuff up the line. Besides food, Gibraltar also provides veterinary care for its wild monkeys.

view through an opening in a siege tunnel

Near the siege tunnels tour busses stopped at a parking area down the hill a ways from the entrance and let people out to walk up. Taxis go right up to the building with the entry, but have to work their way through the oblivious bus crowd walking up the hill to get there. Outside the tunnels there’s a great view of the runway and Spain on the other side. If a plane lands or takes off while you are up there you can watch it from above. Kind of an odd feeling standing on solid ground looking down on a flying jet. 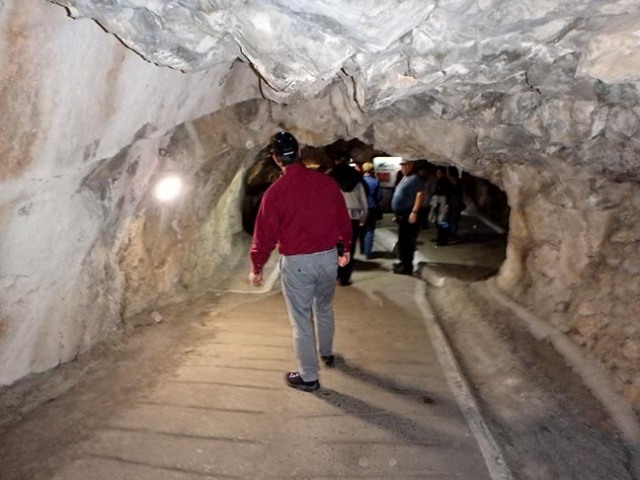 inside the siege tunnel

It took 5 weeks to dig the siege tunnels 82 feet into the rock by hand and gunpowder for the Great Siege War from 1779-1783 when France and Spain tried to take over Gibraltar. By the end of the siege the tunnel extended 370 feet. They have windows along the outer wall of the rock which were initially made for ventilation, but soon adapted for firing cannons. These upper tunnels are open for the public to tour as the Great Siege tunnels. After the siege ended they kept on tunneling adding several chambers. During World War 2 it took just a week to add another 180 feet using mechanized tunneling equipment and explosives. Throughout the war they added many more miles of tunnels. Which is pretty amazing since the whole of Gibraltar is only about 2.6 square miles. More tunnels and storage areas were added during the cold war with tunneling finally ending at a total of about 34 miles in 1968. Gibraltar has about twice as many miles worth of tunnels through the rock as it has in total roads. Some mid-level tunnels are open for tours as WW2 tunnels, but the unmaintained lower tunnels are off limits to the public. Some crumbling tunnels have been permanently sealed off for being unsafe. 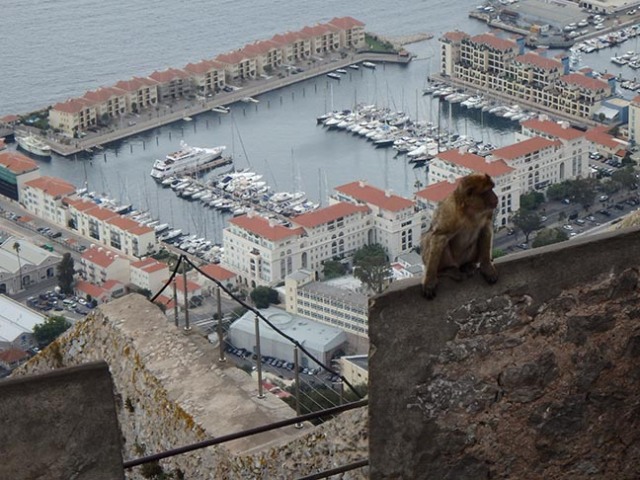 monkey living on the edge

The original boundaries of Gibraltar have walls which once sat at the edge of the sea, but are now inland because of an area of landfill that extended the land into what used to be sea. Gibraltar’s walls once protected inhabitants from invading ships with 3 rows of cannons. Ships are now welcome as tourism is important to the economy of modern Gibralter.

top of the rock – with monkeys

Once we got back down the rock the taxi van let the couple who was not with us out in town because they had not come from the ship. Then it took the rest of us to the port so we didn’t have to walk back or take a bus. While the taxi tour did give us a chance to venture into the cave and siege tunnels and a brief visit with the monkeys, it would have been nicer if the cablecar had ran that day so we would have had more time to explore.

MyCruiseStories blog tells stories about adventures in cruising on ships big and small. Things to do onboard and in port. Anything connected to cruising. Also food, travel, recipes, towel animals, and the occasional random blog.
View all posts by LBcruiseshipblogger →
This entry was posted in Carnival, Europe, Ports of Call, Vista and tagged cave, Gibraltar, photos, rock of Gibralter, runway, siege tunnels, travel. Bookmark the permalink.

9 Responses to The Rock of Gibraltar