Posted on September 3, 2018 by LBcruiseshipblogger 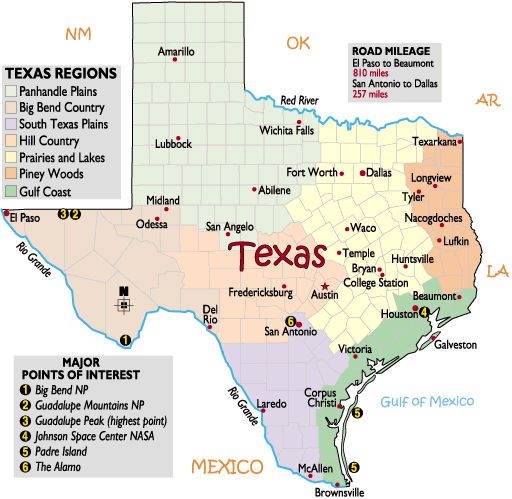 You won’t find ocean cruise ships in landlocked San Antonio, Texas, but you can take a cruise there. We’ll get to that later in this post. San Antonio has interesting and historical things to see making it worth a side trip when in Texas for other reasons, or as an add-on to a cruise. It’s nearly 250 miles from Galveston (where you can find ocean going cruise ships) to San Antonio, or roughly a 4-hour drive. Closer to 3 hours from Houston, where people cruising out of Galveston are likely to fly to. 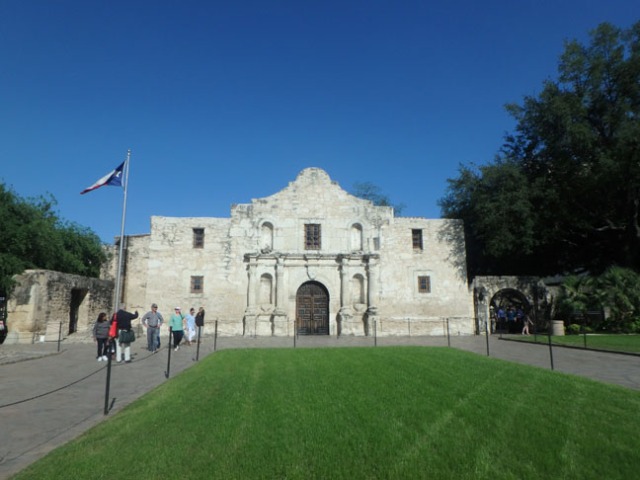 the iconic church at the Alamo

While most of the USA either broke free from England in the Revolutionary War or was settled afterword, Texas has it’s own unique history. It started out as a colony of Spain, then became part of Mexico at their independence. Texas broke away from Mexico and for nearly a decade operated as its own country – the Republic of Texas – before joining the USA. At the same time the battle resulting in the famous “Remember the Alamo” was happening in San Antonio (Feb 23-March 6 1836), a convention of Texans at Washington on the Brazos near Houston signed their Declaration of Independence (March 2-3 1836). American Legend Davy Crockett died in the defeat at the Alamo to Mexico’s President Antonio Lopez de Santa Anna. The greatly outnumbered Texans killed about 3 times more Mexicans than the total number of people inside the Alamo before the Mexican army breached the old mission-turned-fort’s walls and left everyone except a few women and children and one male slave dead. Even back in the 1800’s with no airplanes or modern technology walls were not an effective means of protection – and those heavily guarded walls were fortified with cannons.

Sam Houston’s army defeated Santa Anna shortly after in the Battle of San Jacinto, a short (18-minute) battle fought on April 21 1836. The Treaty of Velasco signed May 14 1836 officially gave Texas their independence, but Mexico refused to accept the treaty due to Santa Anna being a captive at the time of signing. This led to border wars that continued after Texas became a state, culminating in the Mexican-American war in 1846-1848. The Republic of Texas included all of present-day Texas as well as parts of New Mexico, Oklahoma, Colorado, Kansas, and Wyoming.

The Alamo was originally a Catholic mission intended for converting the native population. The mission was abandoned for 10 years, during which time parts of it crumbled to ruins before being converted to a fort while a town sprung up on the other side of the nearby river.

prickly pear cactus in bloom at the Alamo

The iconic church that symbolizes the Alamo was roofless at the time of the infamous battle. Only a small portion of the Alamo’s original complex remains, with just parts of the current structures as original construction. It’s free to go inside. There are displays inside the church (which has a roof now) and in the Long Barrack, which is the other partly original building. They have about a 20-minute historical video and a newer building built in 1936 houses a gift shop. 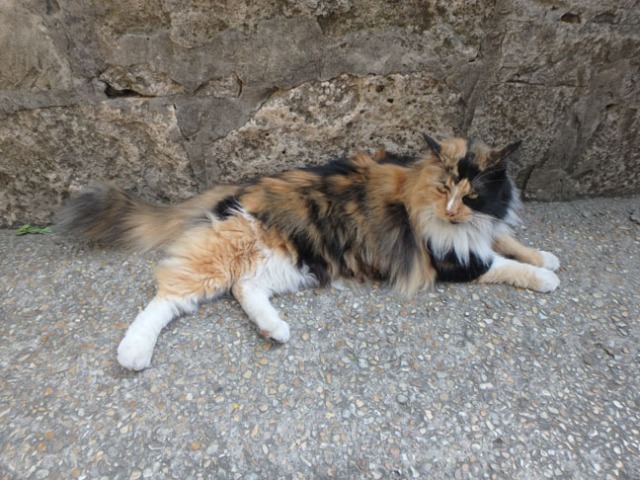 a calico cat makes herself at home at the Alamo

Pathways wind between plantings throughout the grounds. Some of the gardens contain large oak trees or giant prickly pear cactus, which were in bloom during our visit. Brightly colored giant coy swim about a cement-lined creek. We also saw a calico cat sunning herself on the pathway near the fish. She had a collar and license on which meant she belonged to someone, but we were not sure if she lived at the Alamo on mouse patrol or had wandered in from a nearby apartment.

Near the Alamo we saw quite a number of white horse-drawn carriages all decorated up with lights making them suitable for wedding transportation sitting along the roadside waiting for passengers. Most had white horses between the shafts. We didn’t have a lot of time before the Alamo closed at 5:30 and the price for a carriage ride was more than we cared to spend so we passed on taking a ride.

walkway into the Hyatt Hotel

Across the street from the Alamo a stairway leads to the lower level of the Hyatt Hotel. A fountain starting by the stairway flows into a manmade river which runs through the hotel, ending with a bit of glass separating it from the beginning of the real river and another San Antonio attraction – the River Walk. Just follow the hotel’s river inside and when you exit the door at the other end you’re there. Walking on the River Walk is free, but of course it costs money if you want to buy anything at the shops, eat at one of the many restaurants, take a river boat ride, or have a drink at a bar.

San Antonio’s River Walk runs underneath the main streets through town. Most of it follows the natural path of the river, though it does have some manmade additions. The River Walk is clever usage of the above ground portion of a flood control system which incudes a series of dams and some underground pipes working to keep the water level constant. The loop through town is surrounded by hotels, shops and restaurants.

San Antonio is not by the ocean, but you can still take a cruise! River boats cruise the River Walk loop.

Open boats provide inexpensive short cruises around the loop with narration from the ship’s captain about the area and its history. People can choose to cruise by daylight or wait until after dark and cruise under the lights of the buildings. The boats are lit up at night with colors that vary from one boat to the next. Some boats even do dinner cruises where people can dine while they float along with an ever-changing river view. 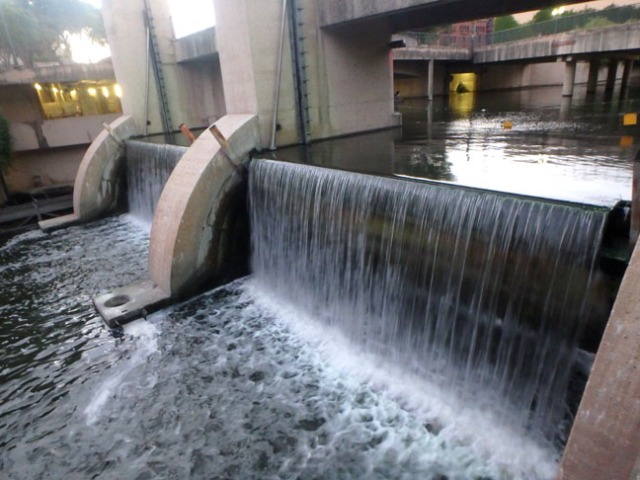 Leaving the loop the walk along the river extends in both directions for those who want a less-crowded walk. We walked out to one of the dams where the water drops to a much lower level. There’s quite a large underground boat docking area on the opposite side of the river, but the boats could go no farther downstream past the dam due to the large drop.

ducks in the river

The loop area of the River Walk has some ducks. Mostly they swim around in the river, but one did come up to the pathway and walk with us for a bit. We also saw some begging for food near some of the restaurants, but they did not look aggressive and none came near our table when we had dinner at the oldest Mexican restaurant on the River Walk. Many of them are black and white, a coloring I had not seen on ducks before though it was common there.

water feature on the River Walk

Pathways extend along both sides of the river throughout the populated area, with numerous bridges along the way and sometimes waterfalls or fountains. We took a riverboat ride after dark and though we did not see anyone fall in the water, the boat captain said if anyone did all they needed to do was stand up as it was rarely deeper than 4 feet. He said generally about one person a day falls in. With all the bars around you might think it is due to drinking, but he said it’s actually texting and walking that causes most of the dunkings.

bridge across the River Walk

We found a B&B a short distance away from the downtown area for just $25 a night so accommodations can be had there  for quite a reasonable price. Parking near the Alamo can get a bit pricey though at $10-$20 for the day depending on the length of stay.

MyCruiseStories blog tells stories about adventures in cruising on ships big and small. Things to do onboard and in port. Anything connected to cruising. Also food, travel, recipes, towel animals, and the occasional random blog.
View all posts by LBcruiseshipblogger →
This entry was posted in Day Trips, Randoms, USA and tagged Alamo, B&B, photos, River Walk, San Antonio, Texas, travel. Bookmark the permalink.