Posted on July 7, 2017 by LBcruiseshipblogger 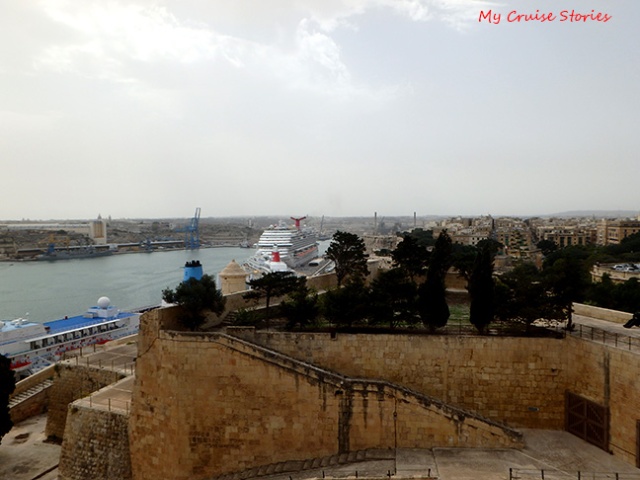 The ship approached Valetta, Malta through a narrow channel between two old-fashioned stone lighthouses. Malta is full of historical stone buildings and beautiful old churches. Our ship docked next to a walled city with walls so tall they stood high above our balcony on deck 9 of Carnival Vista. Walls were an important means of keeping cities safe until advances in technology made them obsolete as a means of protection. Now old walled cities make great tourist attractions. 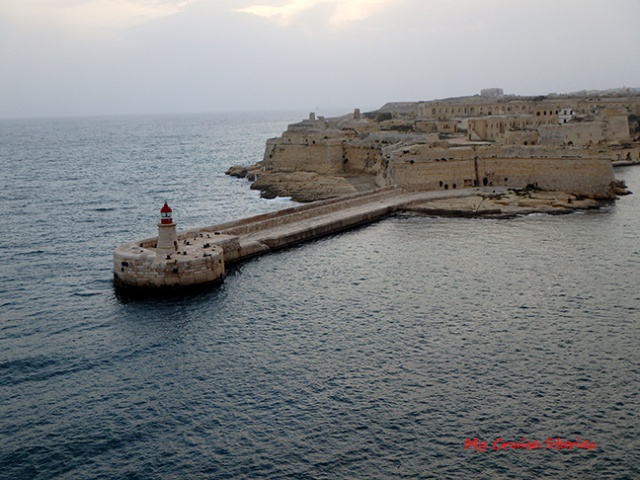 elevator to the top of the wall

Malta is an independent island country officially called the Republic of Malta. It lies between Italy and Africa and is a member of the European Union. Past history includes occupation by Phoenicians, Carthaginians, Greeks, Romans, Byzantines, Moors, Normans, Sicilians, Spanish, Knights of St. John, French, and British, among others.

The ship docks right in Valetta. Just a short walk from the pier there’s a road going up a hill into the city. A bit farther on the other side of an arch there’s a much easier way to get to the top – by elevator. There’s only two buttons, 0 and 1, but the distance traveled between them is like going from the ground floor to the top of a skyscraper. At the top there are all sorts of shops, restaurants, and historic buildings. 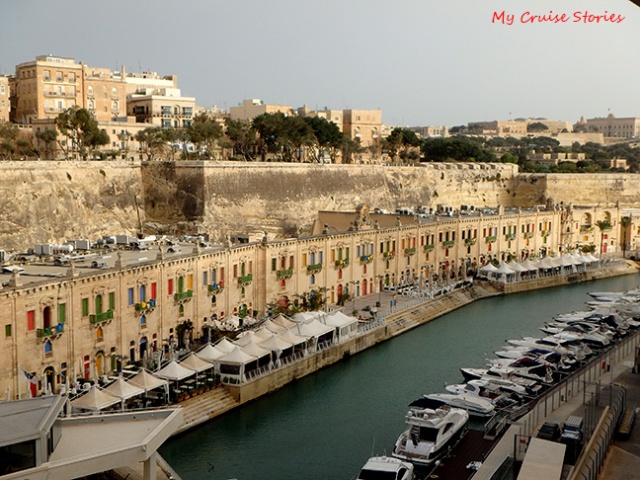 You don’t even have to get up to the main part of town to find things to do. We saw horse carriages and a hop on hop off bus go by from the balcony before we even left the ship. Once we got off we found an inexpensive taxi tour with 3-5 hour options for seeing all the major sites of the island. They charge by the taxi, not the person so if you have 4 people to fill the cab with it’s an excellent deal. We went with friends we met on a previous cruise who were also sailing on this one.

inside the cathedral in Mosta

Our first stop was at a cathedral, the Parish Church of the Assumption, also called the Rotunda of Mosta or the Mosta Dome. Many European cathedrals require shoulders and knees covered. This one had a pile of wraps at the door so anyone inappropriately dressed could cover up to come inside. This church has quite a unique history. In WWII a German bomb landed in the church while more than 300 people were inside for mass.

The bomb did not explode, considered a miracle by the thankful worshipers who would all have died if it had. The original bomb was defused and dumped into the sea, but they have a replica in a back room at the church.

Moving on with our tour, at the top of a steep hill we stopped at the ancient walled city of Mdina whose history traces back over 4000 years. It has been a home to nobility since medieval times and is still an active city, commercial center, and a market for the agricultural lands surrounding it. Mdina and the surrounding areas have significant historical sites including catacombs, churches and monasteries, and a grotto where the apostle St. Paul is said to have lived after a shipwreck. 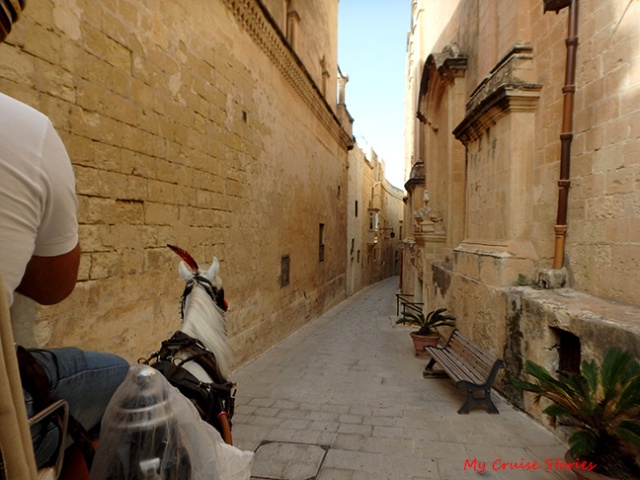 traveling through Mdina’s narrow streets in a horse carriage

Just outside the gate horse drawn carriages wait to take people through the narrow streets of town. Visitors can also walk in. Splitting the cost of a carriage 4 ways was less than 10 euros each so we opted to take the fun way through town in the carriage. The horses wear rubber shoes to lessen the impact of the pavement on their hooves since they spend so much time on hard ground. While driving down one of the narrow streets our driver pointed to a door and said that apartment was for sale for several million and that only rich people lived in that area. 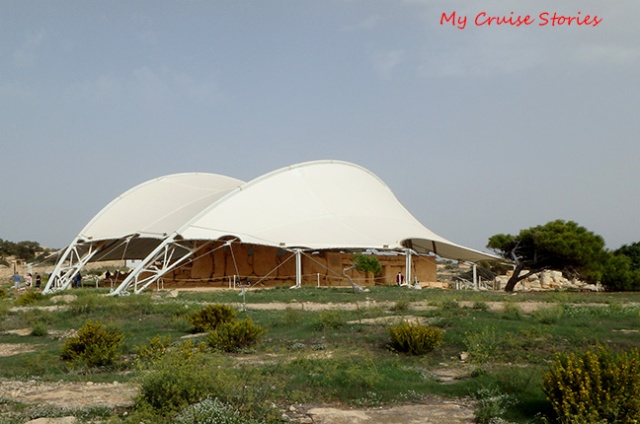 one of the ancient temples at Hagar Qim

Our next stop was Hagar Qim, an archeological site with ancient temples built of megalithic stones about a thousand years older than Egypt’s pyramids. They protect the temples under canvas covers. Our cab driver said we had the option of either paying the 10 euro fee to go inside, or walking the public trail on the outside of the fence and looking at it from there so we took the free path. You don’t see as much that way, but we wanted to make sure we had time for the boat ride at the Blue Grotto – which turned out to be a mistake.

We really wanted to see the blue grotto and to take the boat ride inside, but the boats only run when there’s smooth sailing. The waves were too high in the grotto so no boats ran that day. We could only take pictures from a nearby cliff. We nearly took a cruise ship excursion just to go to the blue grotto so we would have been really disappointed had we booked that since we wouldn’t have gotten to take the boat ride on an excursion either. We got a nice view of it from the cliff, but had we known we would not be spending the time or money for the boat ride we would have gone inside at Hagar Qim.

Our last stop before returning to Valetta was the charming little fishing village of Marsaxlokk. It had a harbor full of cute little boats and all sorts of booths with things for sale to the tourists. It is popular for its fish restaurants and market.

Malta was as notable for the things we didn’t see as it was for the things we did. We did not see any beggars, buskers, graffiti, litter, street peddlers, stray animals, or homeless people anywhere where we went on Malta. Most places all around the world you don’t go far before seeing some or all of those things.