Posted on August 24, 2018 by LBcruiseshipblogger

Cruise ships have a variety of ways to keep passengers entertained on board. Each day brings a new list of different things to do on the schedule, which is posted in the newsletter stewards leave in passenger cabins the night before. Some ships also have an app now where people can get entertainment schedules, menus, and other shipboard information on their cell phones. Cooking demonstrations are a popular thing to include in the cruise ship entertainment schedule.

Holland America has partnered with America’s Test Kitchen. Each Holland America ship has cooking demonstrations from Test Kitchen staff living onboard. Some of the recipes they use are standard from one cruise to the next, but others are itinerary specific. I thought the salmon was per the itinerary when we took the Oosterdam to Alaska, but it showed up again on the Veendam in the Caribbean. It’s also listed on their website as one of the standard shows. The Veendam did have something different though with Cuban recipes the day after a port stop in Havana.

picadillo and pineapple salad at the end of the demo

At the Test Kitchen cooking demonstrations on board the demonstrator makes the recipe they are talking about, but the audience doesn’t get to taste it. People can go up to the front and take photos afterword, but if you want to try it you have to cook it for yourself when you get home. They do hand out giant recipe cards so you don’t have to take notes to get the recipe. Not most of them anyway. There was no recipe card for the pineapple fruit salad.

At the Cuban cooking demonstration they had two different recipe cards, one for Cuban Style Picadillo which they cooked during the demonstration, and one for Fried Sweet Plantains and Mojitos. They made the mojitos, but the fried plantain demonstration was pre-recorded and shown movie style on the test kitchen’s large TV screens.

All recipes say they serve 6. 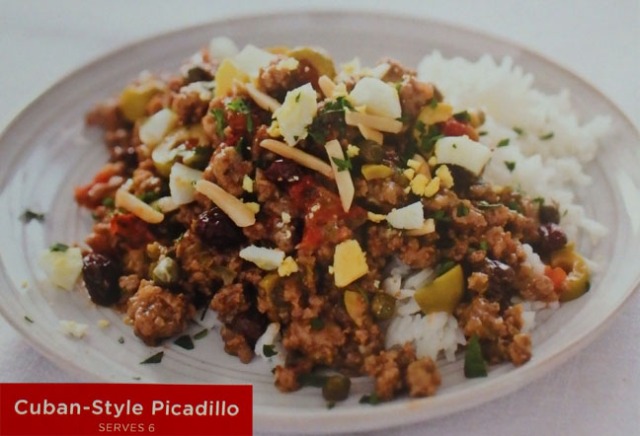 Remove stem and seeds from 1 green bell pepper and cut 1 onion in half. Cut pepper and onion into 2 inch pieces. Put onion and pepper into food processor and pulse until chopped into 1/4 inch pieces, about 12 pulses.

Reduce heat to medium-low, add meat mixture to pot in 2-inch chunks and bring to gentle simmer. Cover and cook. Stir frequently with 2 forks to break meat into 1/4 to 1/2 inch pieces until meat is cooked through, about 10 minutes.

Heat vegetable oil in medium saucepan over med-high heat to 350 degrees F. Carefully add 1/3 of the plantains and cook until dark brown on both sides, about 3-5 minutes, stirring occasionally. Use wire skimmer or slotted spoon to transfer cooked plantains to wire rack set in rimmed baking sheet. Season with salt. Repeat with remaining plantains in 2 more batches. Serve immediately. Do not place plantains on paper towel because they will stick. 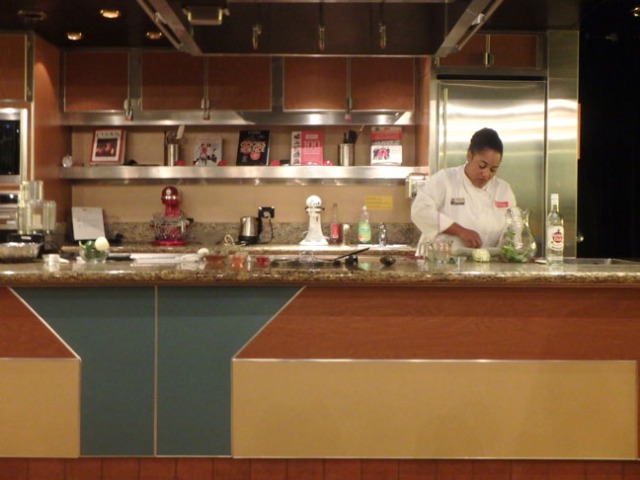