Posted on July 6, 2018 by LBcruiseshipblogger

When visiting San Juan, Puerto Rico, we almost always end up at one of the historical forts there. Partly because it’s cheap to get in and there are 2 forts within walking distance of the ship, but also because we always seem to be there with someone different who hasn’t seen them yet. The forts are so big that no matter how many times we go back we always find something in the fort that we hadn’t seen on a previous visit.

one of San Juan’s feral cats

Although Castillo San Cristobol is closer to the ship, when Carnival Magic stopped in San Juan we chose to go to El Morro because our little grandson adores cats and we knew we could find some along the seaside pathway on the way there. It’s kind of the long way to get there, but well worth the trek. Usually there’s a free shuttle people can take around old town San Juan and to the forts if they don’t want to walk. We had thought we might try and catch it to go from fort to fort, but it wasn’t running that day. Perhaps due to the roads being stuffed up with a huge amount of unmoving traffic due to some big upcoming event  all the locals seemed to be setting up for. 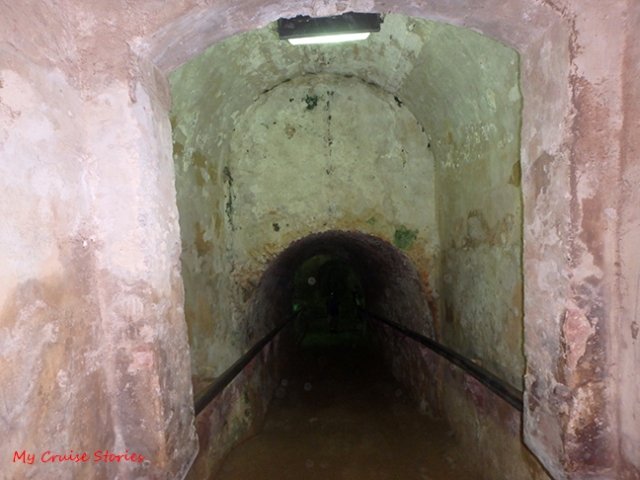 ramp to the original tower

We did find a few undiscovered areas inside the fort where we hadn’t gone before. This time it was on a lower level. It had mostly empty rooms that were once living quarters and a kitchen area. It also had a ramp leading down to the fort’s original tower, which is now incorporated into a larger building. The original fort built in 1539 held just a few men and 4 cannons. 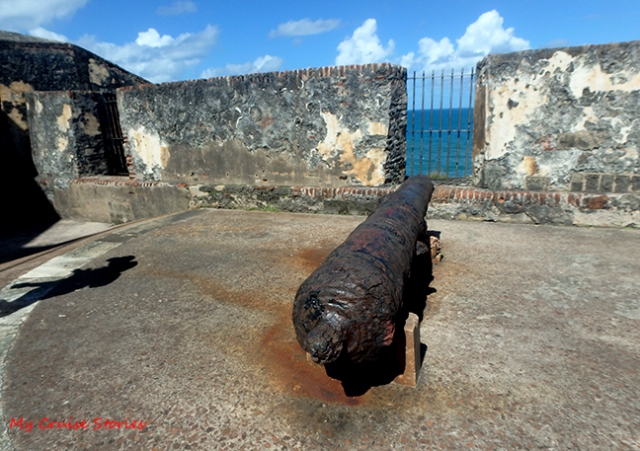 During the next few hundred years as the threats to Spain’s rule of Puerto Rico grew, so did the forts and walls protecting San Juan from pirates and invasions from other countries. Nobody managed to take over for centuries until walls could no longer keep up with technology. During the Spanish American war the USA gained control in 1898.  There’s a sign at the fort saying when walls lost their effectiveness as a means of protection to the technology of the times – which was before airplanes were even invented. That’s why walled cities are all ancient. 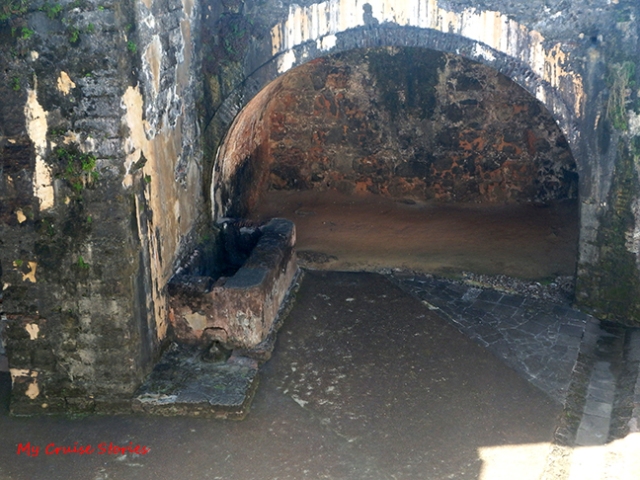 The fort was used as an outpost in both world wars before retiring into the National Park Service in 1949 along with Castillo San Cristobol, who had protected the city from attacks by land for centuries while El Morro guarded from attacks by sea. 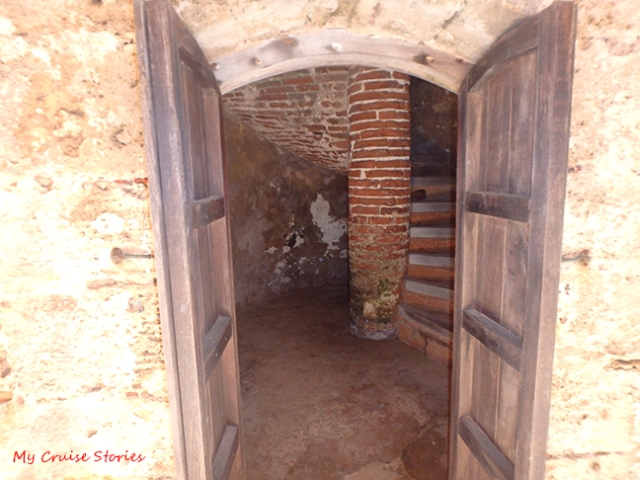 spiral stairs in a low-traffic area of the fort

Near an old kitchen area we found for the first time this visit we discovered a circular stairway leading back up to the open area of the main lower level. In the main upper level it’s always interesting to look at the hall of maps progressing through the years from room to room. In the first one Spain claims to own pretty much everything in the Caribbean as well as a good portion of Mexico and the USA. By the last one Spain owns nothing. 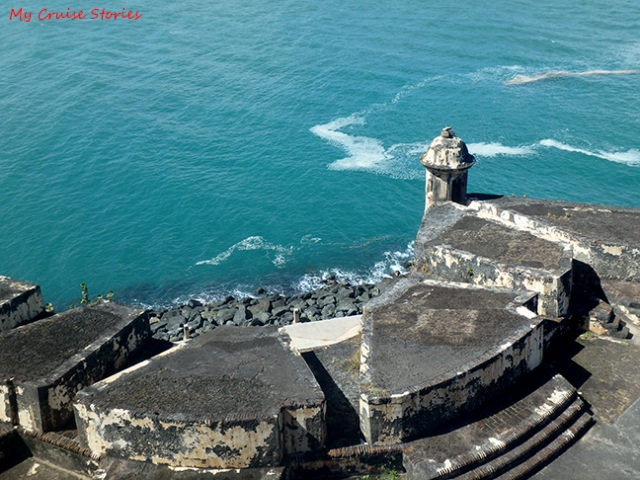 sea view from El Morro – with a garita (lookout tower)

From the fort we had a great view of another cruise ship coming into port. Framing the ship with one of the fort’s arched viewports would have made a great picture, but the viewports all had people in them so that shot never happened for me. We briefly covered all the major areas of the fort during our visit, but it would take a long time to look into every nook and cranny. Which is why we always manage to find something different each visit.

Though a few raindrops fell at the start of our walk, the skies soon cleared and the sun grew hot. The bit of a breeze couldn’t manage to keep anyone cool. By the time we got through exploring El Morro people felt sweaty enough that nobody wanted to walk the mile to Castillo San Cristobal in the heat to explore another fort. We walked back to the ship through town instead. The colorful buildings with grand old Spanish style architecture always make nice scenery to walk by.

Pigeon Park – living up to its name

We stopped by the aptly named pigeon park in our meanderings through town. Our older grandson Justin wondered why we didn’t go to Castillo San Cristobal instead of El Morro when he saw how much closer to the ship it is, but the paseo doesn’t lead there and we’d promised Daniel he’d get to see the cats.

Every time we come to San Juan it seems that more of its historical blue brick roads have gotten paved over. This time we noticed quite a few streets re-done in brick rather then just straight pavement, but they didn’t bother to dye the bricks blue and since San Juan is famous for blue brick roads, not gray ones it’s a bit disappointing they don’t save that part of their history. I’d imagine it would take a lot more work to dig up the old bricks, re-level the road, and then lay them back down than it does to replace them or pave over them, but doing so would save that unique part of their heritage.

In Search of Cats in Old San Juan

The Cats of Old San Juan