Posted on December 26, 2014 by LBcruiseshipblogger 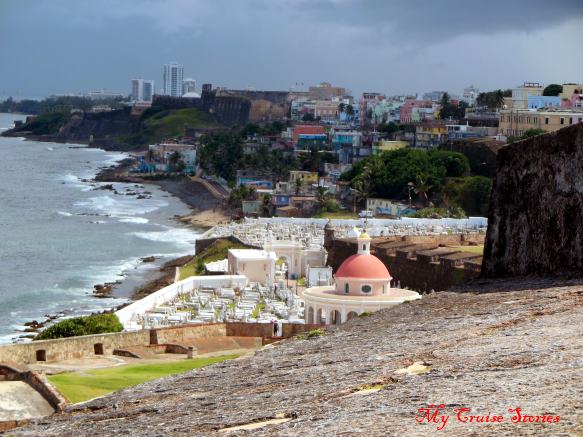 Previously we visited Puerto Rico briefly as a port stop on a couple prior cruises.  After booking a cruise on the Carnival Splendor which started from there we decided to come a couple days ahead in hopes of getting to see a bit more of San Juan. 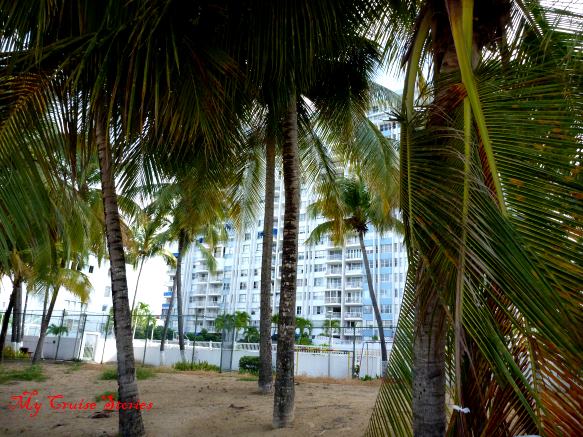 We stayed at Marbella Del Caribe in a vacation rental apartment at a private condo. This beachfront residence sat in Carolina, near the airport and not too far from old San Juan.   This gave us a chance to see one of the modern areas of San Juan as John and I had never left old town on prior visits.  When you leave the historic area, Puerto Rico has some nice beaches.

Our condo sat right on this beach

On the first day after going out to eat a late lunch we sat in the apartment watching a long-lasting thunderstorm which came close enough at one point that the thunder and lightning were nearly simultaneous. Since this storm also came with a downpour we did not venture forth until time came to fetch some dinner.  Three of the six of us donned raincoats and headed out for nearby tacos. We discovered that as is common with CCC (Cheap Chinese Crap) our raincoats looked like what they were supposed to without actually being functional. They repelled rain about as well as a magnet repels steel. 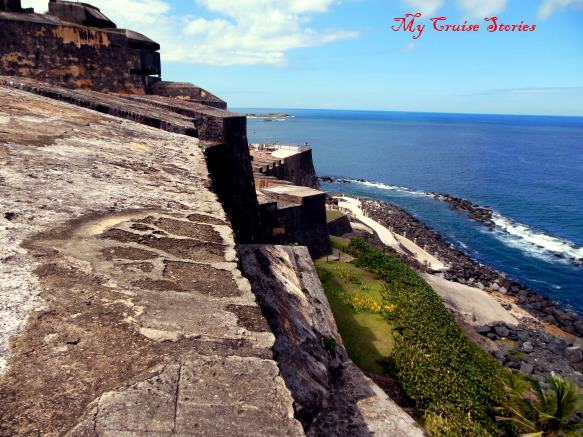 Luckily the rain in Puerto Rico is warm, but entering the restaurant brought an arctic blast of air conditioning, typical of warm places where indoors is almost always way too cold.  The area seemed not prepared for such a deluge as the rain ran through the streets like a river, flowing down the outside stairs from the condo to the sidewalk in waterfall fashion.  Perhaps it doesn’t normally rain that much.

By morning the storm ended and the sun shone brightly. We took a cab to old town as most of our party had not previously visited Puerto Rico. The two old forts in town, Castillo San Cristobal and Castillo San Felipe del Morro (El Morro) belong to the US Parks system (Puerto Rico is a US Territory).  Both are within walking distance from the cruise ship docks for most people and there is a free tram that runs around the perimeter of old town including both forts.  There is also a trolley that ventures into the interior of old town.

Though we have seen both forts before, the forts are quite large and it would take a considerable amount of time to tour just one fort completely in one visit. We saw portions of both we had not ventured into previously, yet have not seen anywhere near all of either one. We had a great view of a couple ships in port from Castillo San Cristobol, though neither ship was ours as the Carnival Splendor would not arrive until the next day.

one of a series of maps

Maps throughout a series of rooms through Castillo San Cristobol showed the Caribbean basin according to which country controlled that land throughout the years. On the first map the entire thing belonged to Spain. Various lands changed hands over the years to places like Great Britain, France, and the Netherlands, and later the USA and independent countries. By the last map Spain had no territory left in the Caribbean at all. 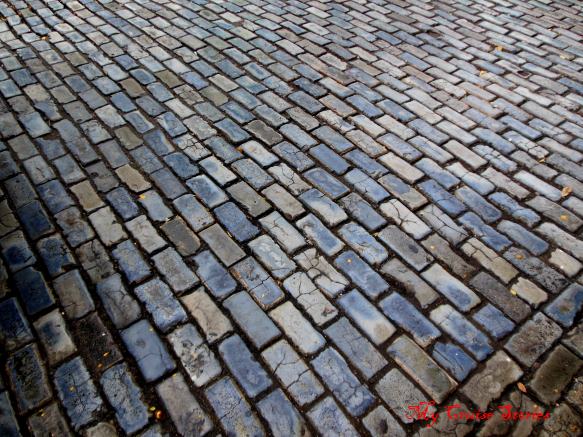 From one of the windows at San Cristobol we could see a blue brick road.  San Juan still has some blue brick roads from colonial days.  They were paved with the ballast of ships, which was blue because it was originally furnace slag.  Unfortunately more and more of these unique roads disappear under new paving as roads get widened or repaired.

Several years back when we visited Puerto Rico we saw Iguanas all over the lawn at San Cristobol.  The workers there at the time said they were not native, but they liked them because they mowed the lawns.  Noticing their absence this time, I asked a worker what happened to all the Iguanas.  He said they were in cans.  Apparently the population got too large and they started eliminating them.

Dad and John check out a garita at El Morro

After wandering about San Cristobol a bit we caught the free tram to El Morro.  At first glance all the seats appeared full, but people on board kindly pointed out space here and there, finding enough for all 6 of us to get on. 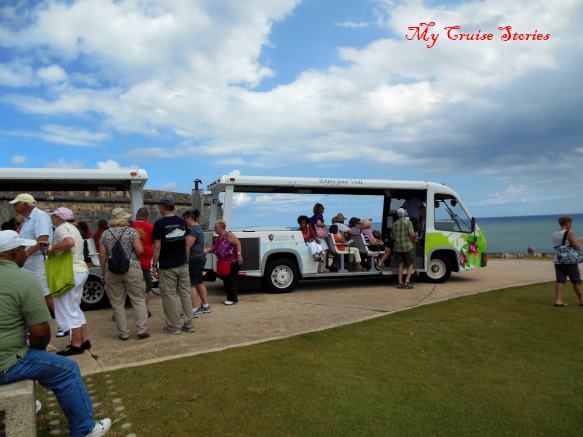 We got off at El Morro.  It just costs $5 to see one or both of the forts.  Since both are within walking distance of the cruise ship docks and have free transportation as well it makes a great low-cost venture for cruise ship passengers on port stops there. 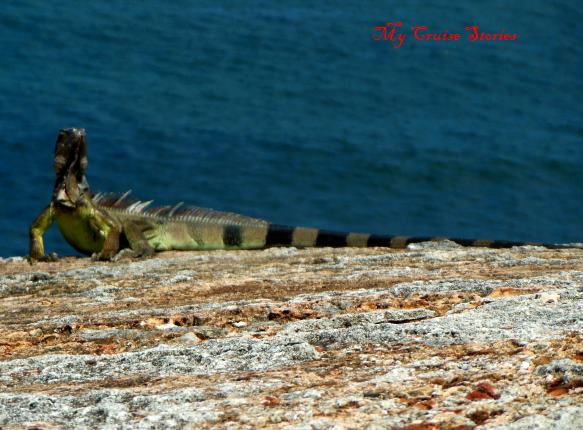 We looked at some views from garitas, the watch towers on the fort’s walls, then wandered up a long ramp near the lighthouse where we did not go on our last visit there.  We were happy to find one iguana sunning itself on a wall at the top level of the fort.  It posed like a model at a photo shoot. 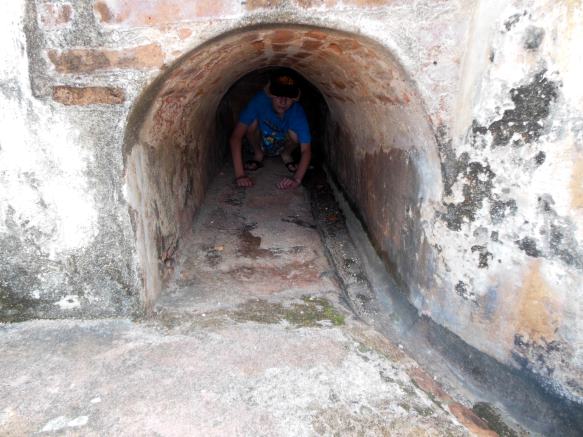 A series of small tunnels connected the otherwise divided sections of that level. 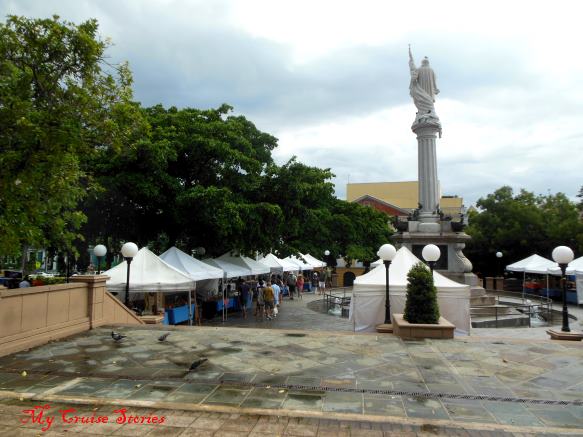 flea market in the plaza

At one viewpoint my dad noticed dark clouds in the sky and warned us of the approaching storm.  We headed to the tram stop, preceded by thunder and lightning, but got lucky in that the rain did not start until we were under the shelter of the tram’s roof.  We saw a cafe from the tram and got off at the next stop on the far side of a plaza.  We walked through the plaza filled with craft booths, doing our best to stay under the shelter of the booths as we made our way through.  One had some nice hand blown glass, but getting it home in one piece might have been an issue so we didn’t buy any.  On the other side of the plaza one of the Mario brothers (from old Nintendo games) stood out in front of a cafe.  Halloween in San Juan, all the cafe workers dressed up.  We had a Mexican wrestler as our lunch waiter there.

It rained heavily for a bit, then cleared up and before we left the café we had bright sunshine again. After a cab ride back to our condo we spent an enjoyable afternoon on the beach behind the condo. The incoming waves gave the beach somewhat of a wave pool effect where 3 of us entertained ourselves while the others napped on beach towels in the sand.

In the evening people in costumes wandered about the street in front of the condo.  The bar across the street had some sort of overnight Halloween party with people hanging out by their front door all night.  They weren’t loud or anything, just there.

The next morning we went to the port and boarded the Splendor for a cruise which included quite a few port stops at islands where cruise ships don’t visit daily.  We liked the opportunity to visit different places.  We also enjoyed having some extra time to explore San Juan before boarding the ship.  Most ports have a lot to see if you have a little time to spend there before or after the cruise.

8 Responses to Staying in Puerto Rico