Posted on July 4, 2018 by LBcruiseshipblogger 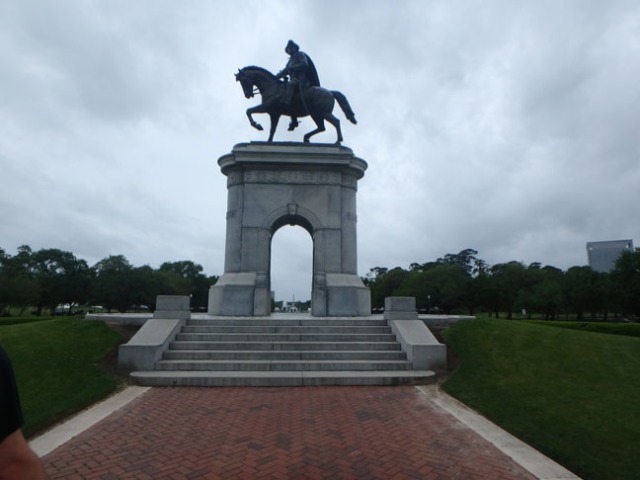 statue of Sam Houston in a Houston park

When cruising from Galveston, anyone not from the area will most likely fly in and out of Houston, which is just under an hour away. For anyone with a bit of time before or after their cruise, Houston has a lot to see. 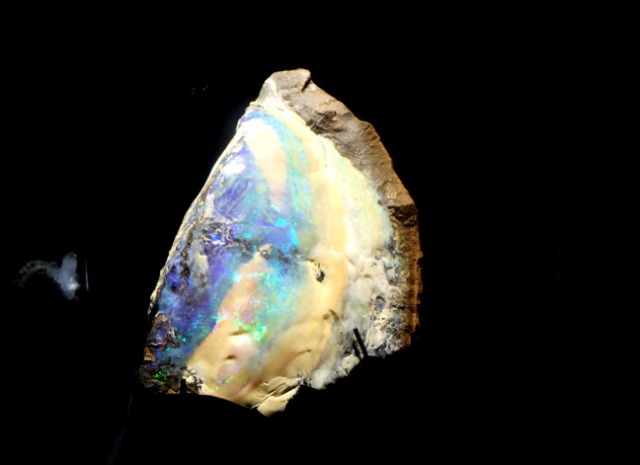 Like most cities, Houston is ever expanding. It currently has 3 freeways ringing the city in loops getting farther from the center with each new addition. Some of these are toll roads. Houston has a lot of parks. In the suburbs surrounding the city trails are often found along the bayous that drain rainwater away from people’s homes. Or at least they are supposed to. When a massive hurricane dumps record amounts of water the houses closest to the bayous are likely the first to flood, though that hasn’t stopped new construction in those areas. So pretty much if you’re there for a visit the parks and trails are great, but if you’re looking to buy find high ground. 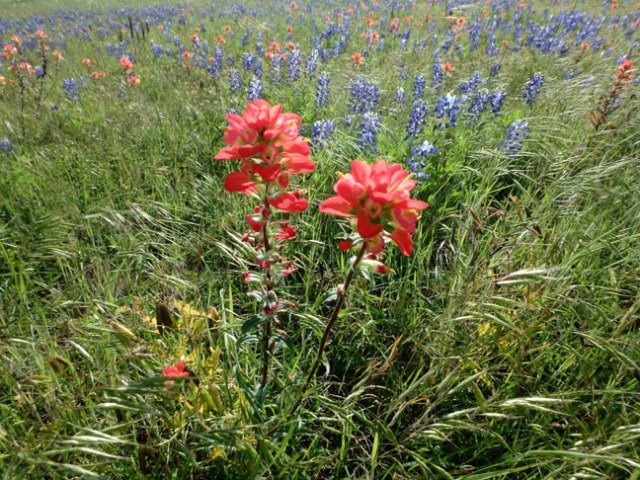 I was just recently near Houston for a visit with my son, who luckily bought a house on high enough ground not to flood, though the other side of his neighborhood near the bayou did. Each of the neighborhoods throughout the suburbs there seemed to have their own park and trails, some of which were close enough to walk from one to another. One of those parks had some flood damage all around a lake. Right next to it on ground downhill from the park at a lower level than the lake developers busily cut down trees and leveled ground in preparation to build new homes in what was flooded woods during the last hurricane. Apparently they take their money and run, leaving the new homeowner to deal with it when the floods come. Houston is still working on recovering. All the previously flooded areas we visited had some restoration work done and some yet to go, including that neighborhood park. 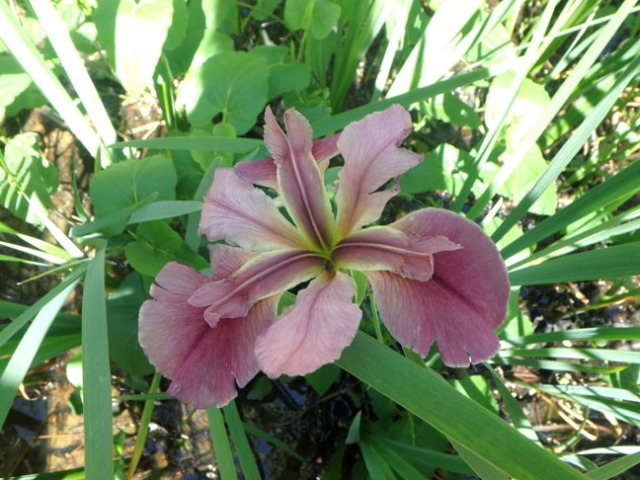 We went to a free botanical park one day called Mercer Botanical Gardens that had been underwater during the hurricane. Some of the gardens had been fully restored, others were fairly sparse or empty with signs telling what new exhibit would be there when it was finished. One trail that had led to some other gardens and a turtle pond was closed due to hurricane damage. The botanical garden had a forested area with trails through tall trees that had all survived the storm making it hard to tell in that particular area that they had all been flooded not so long ago. It was a nice park with several swing chairs and lots of benches in the garden area. Quite a popular place for the locals to take photos as we saw several who seemed to be taking either pre-wedding, prom, or graduation shots. 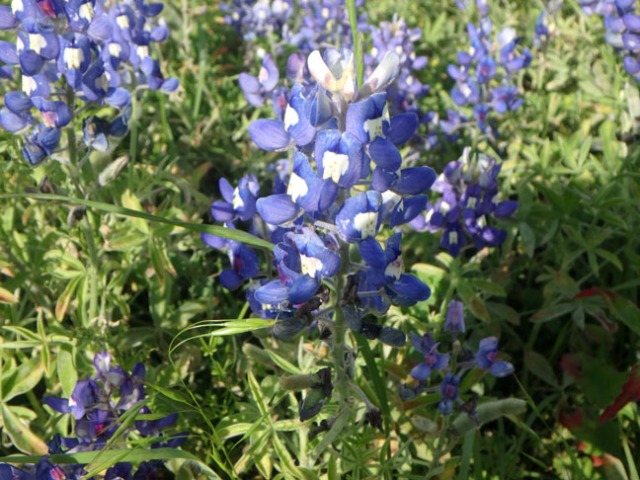 While Houston has plenty of tourist attractions people pay to see, there’s always something people can do for free. We were there during Blue Bonnet season, where anyone with a car can drive out to the country in search of fields full of blue flowers. Of course most of those fields are behind somebody’s fence, but we did find a bunch out in the open in what looked like a recently built industrial park that for the time had more open fields than buildings. 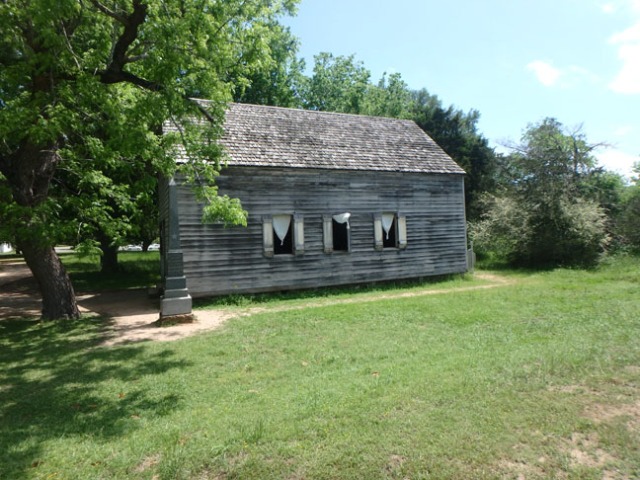 historical building where the Texas declaration of independence was signed

We also found a few small patches of blue bonnets among other wildflowers in a historical park called Washington on the Brazos. It was once a town at a river crossing, and played an important part in Texas history being the place where their declaration of independence from Mexico was signed during the same time period that the battle of the Alamo took place in San Antonio (1836). Mexico had recently gained independence from Spain and Texas broke away from Mexico, existing as its own country called the Republic of Texas for about a decade before joining the USA. 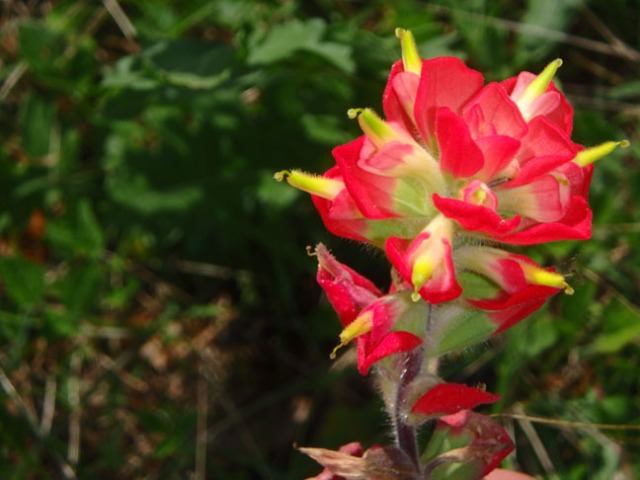 wildflower at Washington on the Brazos

One of the trails there crossed a bridge with a sign saying not to feed the alligators. Which you could either read as don’t throw food into the water for the alligators to eat, or don’t go into the water because you could become alligator food. The creek under that bridge was dry at that time and there were no alligators in the vicinity unless they were hiding in a swampy area on the far side of a big mud flat. 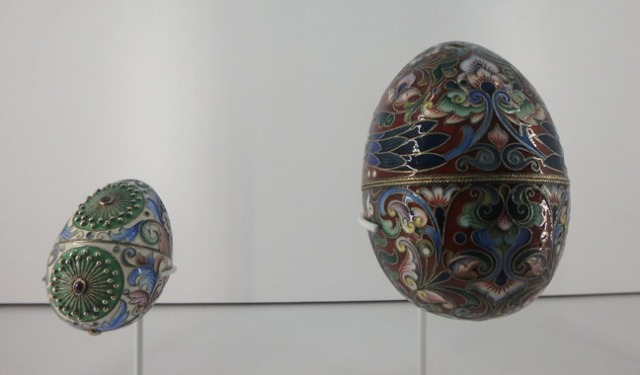 Fabergé eggs at the museum

In Houston there are a lot of museums. We went to the Museum of Natural Science one day. It has a large rock collection with all sorts of different geodes and crystals. There’s even a Fabergé exhibit among the rocks that has some of the original eggs made for Russian imperials as well as many other things from the donor’s Faberge collection. 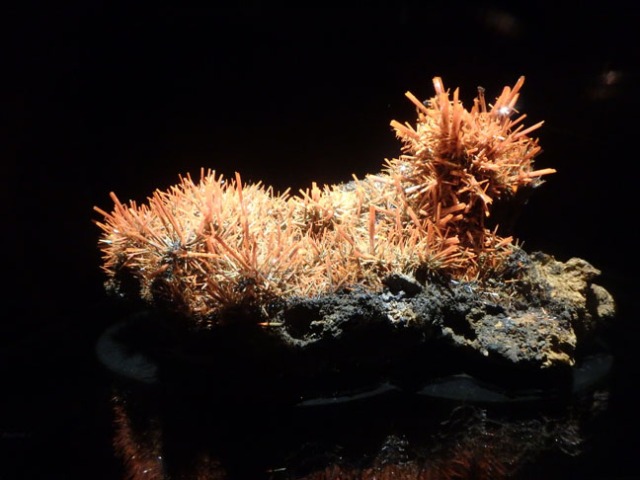 rock crystals at the museum

The museum also had exhibits on sea life, dinosaurs, chemistry and random curiosities. It even had a temporary exhibit on messages in bottles which displayed bottles and their messages found in a river cleanup. There was also a list of how many things like refrigerators, washing machines, cars, and such were pulled out of the river. People just have no respect for the planet we all share. We did see considerably less litter along the roadsides in Texas than in some places, but whether that is due to everyone cleaning up after the hurricane or if the people there aren’t quite such slobs as in some other places I can’t say. The museum is a good place to go on a day when the weather isn’t so nice. The gift shop stays open about an hour after the museum closes, and has some things that are just as interesting as the museum displays. 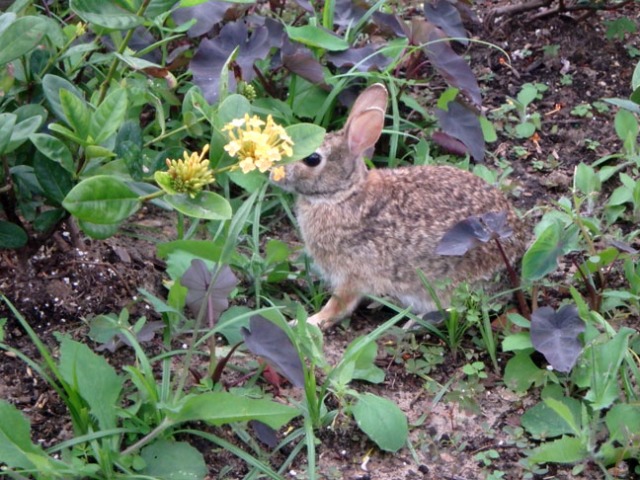 rabbits like the gardens at the park near the museum

There’s a park and garden near the museum, which is a nice place to take a stroll if the museum closes too early and you want something else to do. 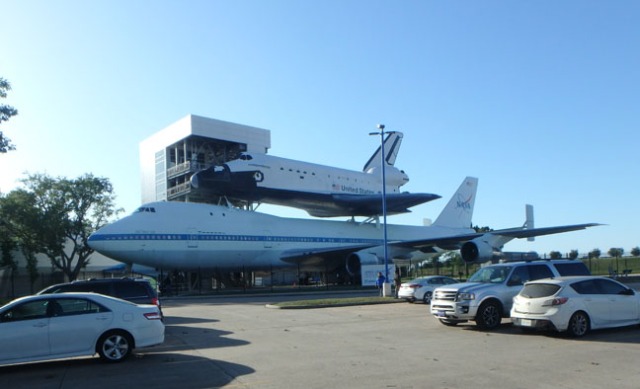 Houston is home to the Johnson Space Center. While all the launches are done in Florida at Cape Canaveral at the Kennedy Space Center, mission control is at Houston. Even without the moon rockets and space shuttles of the past, Florida still has occasional launches for satellites or probes. Mission control in Houston is currently involved with projects at the international space station. Right out in front of the Houston visitor’s center sits a 747 with a space shuttle on top. Entry into both is one of the exhibits there, and it is the only place in the world that has that set-up. We have seen other space shuttles in various places, but none with the 747 attached. 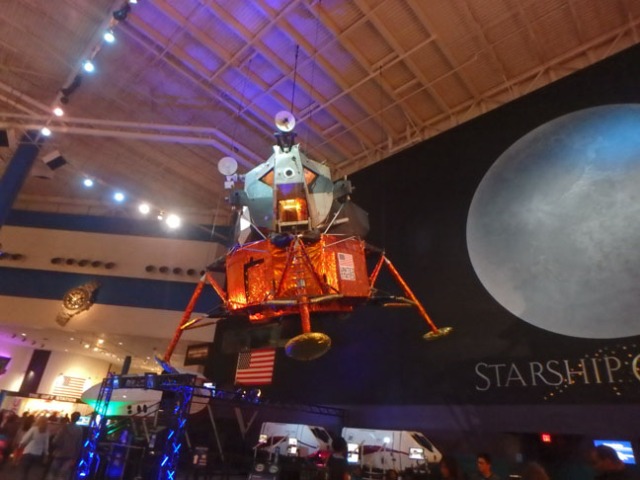 The rest of the visitor’s center has quite a variety of displays of former, current, and future space projects. Their current project involves an updated version of the old Saturn moon rockets intended to eventually go to Mars. There is a theater where astronauts give talks, and for a price you can book lunch with the astronaut of the day. Pretty much everything else is included in the price of admission. There are shuttles offering half hour or 90-minute tours. The half hour one goes around the grounds and out to the building housing an unused Saturn moon rocket. 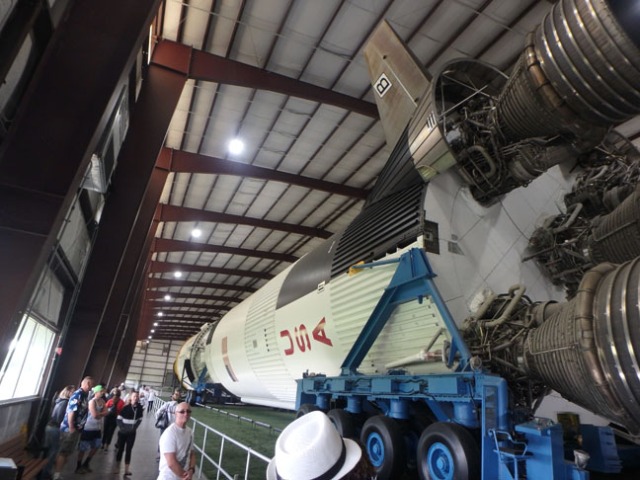 The 90-minute one goes to mission control and to a viewspace into an actual working area before dropping people at the Saturn rocket display. The working area had robots and mars projects in the works. The 90-minute tour is definitely the more popular choice as it had a considerably longer line. 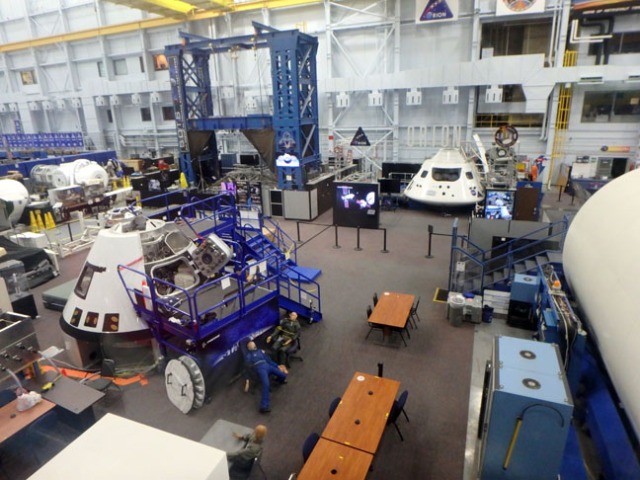 The Johnson Space Center is not a good choice in bad weather since the tram ride between buildings is in an open-sided tram, and both the shuttle/747 display and tram tours sometimes shut down in inclement weather – particularly if there’s lightning. It’s kind of expensive to get in so it would be a real disappointment to miss those things.

MyCruiseStories blog tells stories about adventures in cruising on ships big and small. Things to do onboard and in port. Anything connected to cruising. Also food, travel, recipes, towel animals, and the occasional random blog.
View all posts by LBcruiseshipblogger →
This entry was posted in Port City Side Trips, USA and tagged Blue Bonnet flowers, Houston, Johnson Space Center, photos, Science Museum, Space Center, Texas. Bookmark the permalink.