Posted on June 9, 2017 by LBcruiseshipblogger

posing at the entryway to Animal Kingdom

Unlike the rest of Disney World where the animals are all characters, animation, or wild visitors – like birds or squirrels dropping in, Animal Kingdom has actual live animals as a planned part of their exhibits. Of course it’s still very Disney with plenty of animals of the character or animated variety. Animal Kingdom has the regular sort of theme park rides, but it also has jungle adventures.

animals on the animal trek

Animal Kingdom is divided up into several different lands. The Africa part had a jungle trek trail with views of a variety of animals like tigers, water buffalo, and all sorts of birds including a bunch in a walk-through aviary. 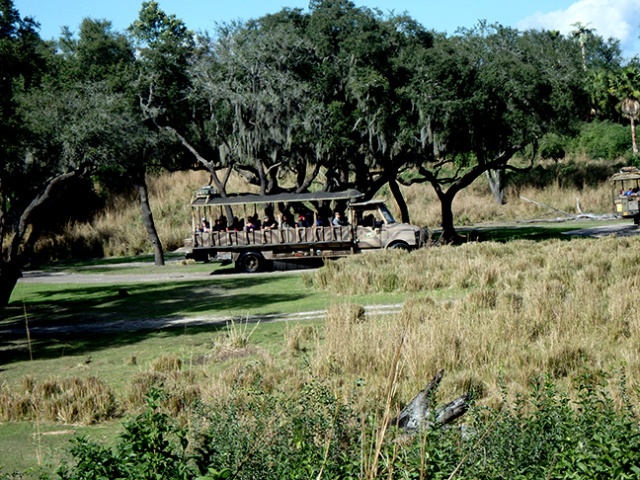 Africa also had the Kilimanjaro Safari on an open-sided jungle truck through animal habitats where visitors can see real live zebras, giraffes, elephants, and other animals. One of the elephants had a tiny baby, but it did not get close enough for a photo. 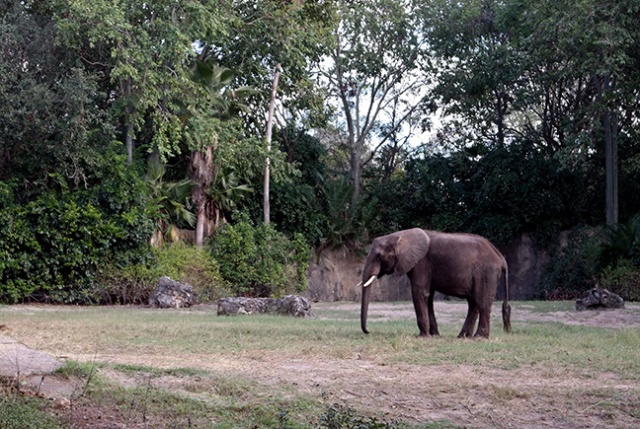 elephant on the safari

The animals on the safari wandered freely through their habitat. Every now and then the truck passed through gates between habitats for different types of animals. Though the gates are open, they all had things to keep animals from passing through that felt like bumpy terrain to trucks driving over. One place had a bridge that appeared questionable, obviously part of the ride since the guides made a point of acting like it was scary to cross. Not that Disney World would ever let anything get into poor repair because of the liability, but if it somehow did happen they would not point it out.

Some of the animals roam freely through the areas where the trucks drive, but the more dangerous ones like alligators or hippos have walls around them.

monkeying around at Disney World

The Asia area had live monkeys in a habitat in the middle of the main walkway area of the park. We saw them on the way to one of the park’s most popular rides – the Everest Expedition roller coaster. This ride has a minimum height requirement of 44 inches. Portions of the line go through indoor areas with displays about yeti, and the yeti does make an appearance during the ride.

Try and get fast passes for the safari and the Everest roller coaster, and if you can’t get the fast passes do those two as early as possible before the lines build up because they tend to have the longest lines in the Animal Kingdom. Dinosaur was a distant third on the amount of wait time required during our visit there. Most of the rest of Animal Kingdom’s attractions did not have long lines during our visit. Of course during peak season everything probably has long lines and some things that may normally have long lines were closed for refurbishment.

While we were there construction was going on for the new Pandora – The World of Avatar exhibit. This section just opened a couple weeks ago, so most likely that is where the longest lines are now. The main attractions in Pandora are a special effects flight ride and a river journey.

Dinosaur is in the DinoLand section of the park which also includes a giant dinosaur statue and a roller coaster called Primeval Whirl which looked fun, but had a minimum height which was too tall for either of the grandkids at 48 inches so we didn’t go on it. The Triceratop Spin there is like Dumbo from the Magic Kingdom without the overly long line other than the ride cars are dinosaurs rather than elephants.

on the Dinosaur ride

The ride just called Dinosaur puts visitors on an expedition through time in a failed attempt to capture a dinosaur before the meteor arrives. Minimum height is 40 inches for this ride. The darkness and dinosaurs may seem scary to some small children. 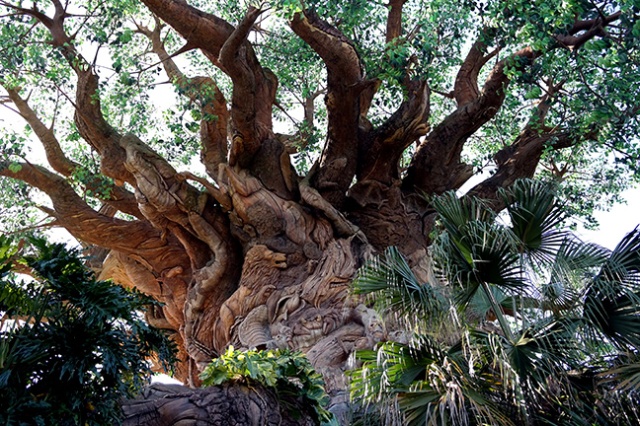 Attractions at the Animal Kingdom include shows as well as rides. One called It’s Tough To Be A Bug is inside of the large artificial rainforest tree dominating that section of the park. First show we’ve ever seen in a tree-ater. Make sure all the kids sit in their own seats rather than on someone’s lap so they get all the special effects in this show.

There’s also the Wildlife Express train out to Rafiki’s Planet Watch, an area with a petting farm, live animal shows, and a view into a lab and veterinary office. There’s lots of conservation information along the walkway as well as some monkeys and other endangered animals on display. Animals in the petting farm area have ropes they can pass under if they want to go where people aren’t allowed. 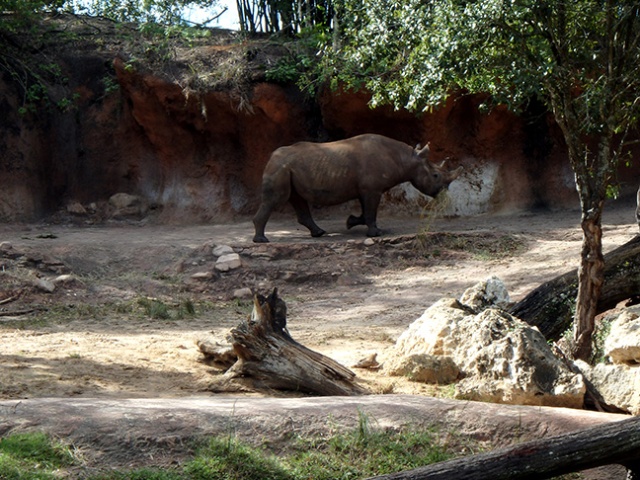 rhino on the safari

Being Disney there are plenty of places in the Animal Kingdom to shop, eat, or meet Disney characters.

the kids loved this fountain

Throughout the park we found random things you pass by that kids can enjoy like drums they can play or a fountain where sticking a hand or finger in it changes where the water goes. Speaking of fountains, there are drinking fountains near every bathroom in all of the Disney World parks.

giraffe on the Kilimanjaro Safari

Animal Kingdom was the least crowded of the 4 parks during our visit there. It’s possible that could have changed due to the new Avatar Land, but I would guess that Epcot and the Magic Kingdom probably remain more popular. The best way to know where to avoid the crowds is putting the Disney World app on your smart phone during a visit there. Besides letting you book fast passes and listing wait times for rides, the app can also do things like show park maps and give directions from where you are to where you want to go.

MyCruiseStories blog tells stories about adventures in cruising on ships big and small. Things to do onboard and in port. Anything connected to cruising. Also food, travel, recipes, towel animals, and the occasional random blog.
View all posts by LBcruiseshipblogger →
This entry was posted in Port City Side Trips, Randoms, USA and tagged Animal Kingdom, Disney World, family fun, photos, rides, travel, vacation. Bookmark the permalink.