Posted on August 25, 2017 by LBcruiseshipblogger

Epcot was our favorite of the four Disney World Parks (which also include the Magic Kingdom, Animal Kingdom, and Hollywood Studios.) Sheri scored a great deal when she got our tickets, getting 4-day tickets with an extra 3 days free so we had 7 days total to go to the parks. Besides the fact that most of the runDisney races ended at Epcot, we just really enjoyed that park and returned there the most times.

visiting Epcot with the family

Magic Kingdom is of course the most famous, and the one people are most likely to think of when picturing Disney World in their minds. Magic Kingdom was also the most crowded of the four. Between height requirements for the kids and inability to get fast passes even several days in advance for the most popular rides we didn’t see a lot on the one day that we went there. 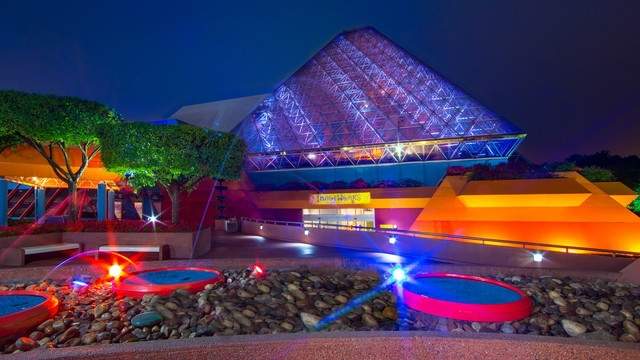 the Imagination Ride with Figment is inside this building (internet photo)

People who aren’t with small children can get through some lines faster by taking the single rider line option, which puts individual people into the leftover seats after loading up families from the regular line. If you are with anyone else in the single rider line you may not get on the ride at the same time and aren’t at all likely to sit together, but it can save time if people just want to meet up at the end. It’s not an option if you are with children too young to leave on their own before, after, or during the ride.

Epcot center has two main sections. Most of the rides are at Future World, which is divided into east and west sides to make things easier to find. The World Showcase area has representations of 11 different nations. Some mainly just have restaurants, but some have rides and other displays. You can get a map at the entrance, and the Disney app is a great help with features like directing you from where you are to where you want to go, and showing wait times for all the rides and other attractions. We often chose where to go next by whatever the app said had the shortest wait time. You can also use the app to reserve fast pass times for the rides you want to go on. There is a limit of 3 booked, but if anything is available after you use one you can book another. 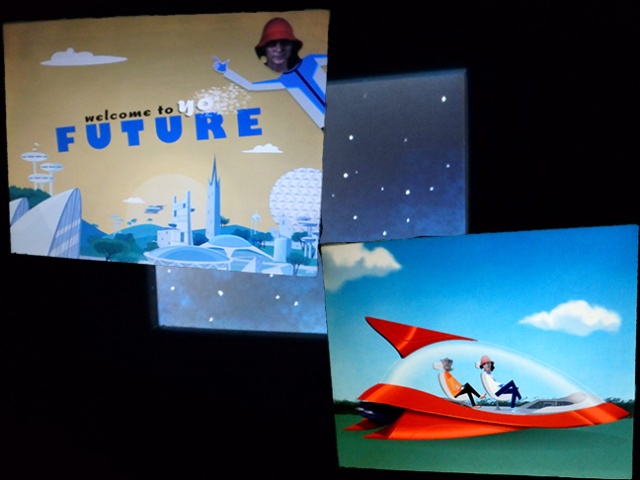 The big ball symbolic of Epcot sits at the entrance between Future World East and West. It houses Spaceship Earth, a slow and scenic ride which had a very long line the first day we went so we were glad of a fast pass there. My 5 and 7 year old grandkids loved that ride, especially the part at the end where you make your own future on your private computer screen and then see a little video of how your future turned out depending on your answers to their questions. 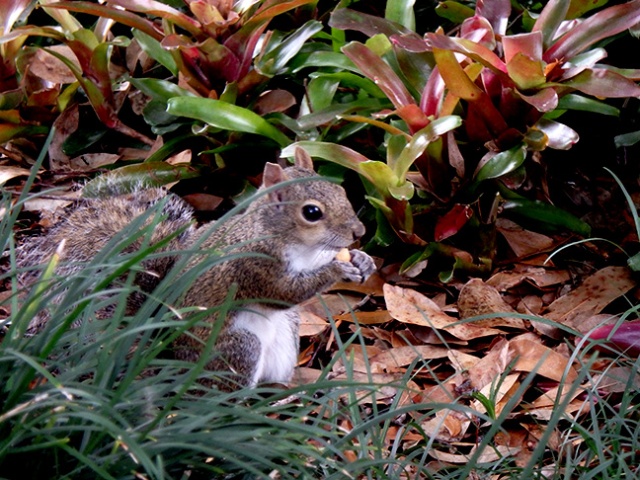 The kids were just as entertained by the squirrels we saw throughout the park as they were by anything else there. They like nature and they’re from Australia and hadn’t seen squirrels before.

at the beginning of the kid’s favorite Imagination Ride

The kids very favorite ride in all of Disney World, called Journey Into Imagination with Figment, was at Epcot. Our first day there was the only time we ever saw a line at that ride, and also the only time we had a fast pass for it. We rode it several more times on other days when there was no line. The kids really liked the ride with Figment – as in Figment of Imagination. The ride featured a little purple dragon and a lot of imagination.

Figment makes a big stink – and the ride did too

The kids particularly liked the bit where Figment put on a skunk suit and emitted quite a stink. Their mom missed our first day, staying back at the hotel suffering from food poisoning. The kids did not tell her about the stinky bit before her first time on the ride, gleefully smirking to themselves waiting for the giant stink to happen.

near the entrance to the Nemo ride

Our last fass pass the first day was on the Nemo ride. We found a few things with short wait times including meeting Elsa and Anna in the Norway area, a fiesta ride in the Mexico area, and the Disney & Pixar Short Film Festival theater which had 3-D shows and seat effects to enhance the action on the screen.

On later visits to Epcot when we had more advance time to get them, we got fast passes for some of the more popular rides like Soarin and the Test Track, both favorites that we managed to get on again another day when we got there early enough to get on before they built up a line. Soarin was one of Disney World’s best. It’s mostly visual, but the seats do rise so your feet dangle in the air and it feels like you are flying over the scenery on the screen in a pretty good imitation of a hang glider. 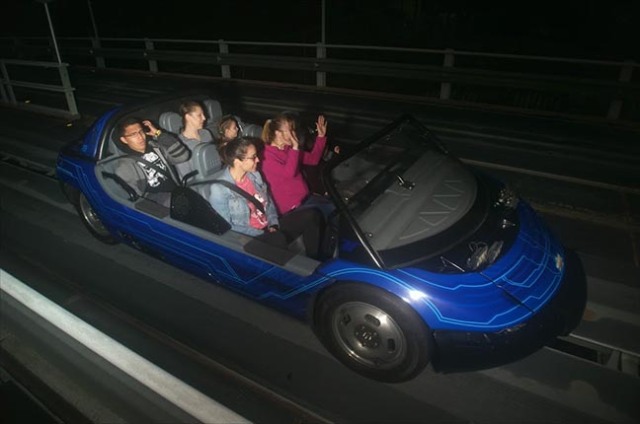 The test track is one of the most fun rides there. You design a car in a computer screen and then during the ride it gives comparisons as to how your design performed in relation to the other people in your car. The self-driven car goes through some indoor tests where it scores how your design would react to various things and then goes outside where it speeds down the track at about 70mph. At one point it even drives on the wall. It may close for a time if the weather is bad or if the ride had other problems. We were in line for it with the kids while waiting for Sheri and Aaron to reach Epcot on marathon day when the ride shut down for awhile. Having just enough time to get through, and not knowing how long it would stay closed we had to leave the line to make sure we didn’t miss them running by.

on Soarin your feet dangle over fast-moving scenery (internet photo)

A lot of the rides at Disney World are the slow and scenic sort, but they do have some faster rides. The wilder rides have minimum height limits so make sure the kids are tall enough before going on those. The ones with consistently long wait times during our visit were Soarin, Frozen Ever After, and the Test Track so those are the ones to either try and get fast passes for or get to first before the lines build up if you get to the park early. One stormy day we got there before the official opening time they were letting people in early. We got through Spaceship Earth before the park officially opened and got to Frozen Ever After and Soarin before they had any lines. We did more rides on that one day than on several other days combined because the wind, rain, and lightning that cancelled the half-marathon scheduled for that day also kept the crowds away.

meeting Joy and Sadness from Inside Out

The wait times posted at the rides and on the Disney App are very helpful in deciding where to go and which things to do. Most of the character meets (ie photo ops) have posted times, but Joy and Sadness from Inside Out did not. Lines at Disney are often deceptive because either you can’t see the whole thing or it just doesn’t move as expected. The one for Joy and Sadness looked relatively short, but took 42 minutes to get through, the only long line of our rainy day. At least it was an indoor line, which quite a lot of them are. 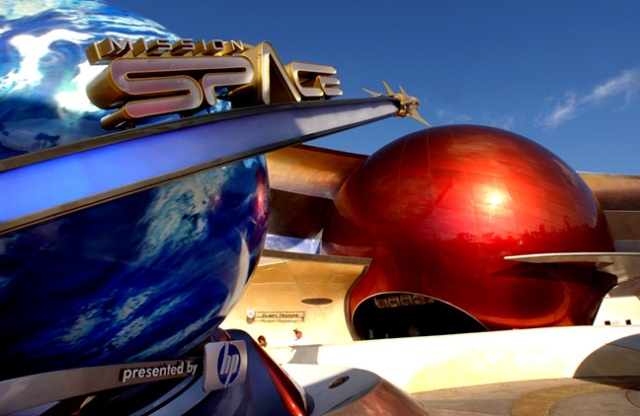 Little Hanna loved the Mission Space ride – a simulator of a mission into space. It had easy and queasy options, though they called the queasy one intense. The ride simulated zero G among other things. It had motion sickness warnings, but it is hard to tell by those warnings since a lot of the rides have motion sickness warnings and most of them don’t actually need them. The difference on this one was the barf bags strategically placed at every station once you enter the actual ride. I wished we’d picked the easy option upon seeing those since I do sometimes have motion sickness issues. I managed not to get sick, but was extremely glad when it ended because the ride did leave me pretty nauseous. Luckily there’s a waiting area with a playground at the end where Daniel and Sheri went since he’s too small for the ride so I had somewhere to sit and recover. Another day John and Sheri went on Mission Space with Hannah while I happily volunteered to wait at the playground with Daniel. Hannah was disappointed with the easy option they’d chosen, but John and Sheri both said it was plenty intense for them – and they don’t have motion sickness issues. Hannah enjoyed Mission Space, but none of the rest of us would recommend it. 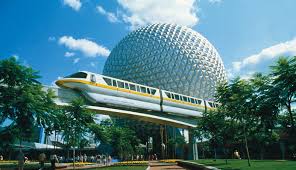 If you’re thinking about planning a trip to Disney World, it’s a good idea to wait to go until after your smallest kid is at least 40 inches tall or the amount of rides you can go on is really limited. 44 inches gets you on most rides, and 48 was the biggest minimum height we saw anywhere at Disney World.

MyCruiseStories blog tells stories about adventures in cruising on ships big and small. Things to do onboard and in port. Anything connected to cruising. Also food, travel, recipes, towel animals, and the occasional random blog.
View all posts by LBcruiseshipblogger →
This entry was posted in Port City Side Trips, Randoms, USA and tagged Epcot, Epcot Center, Florida, how to bypass the line, imagination, photos, rides, Walt Disney World. Bookmark the permalink.