Posted on June 2, 2017 by LBcruiseshipblogger

The cruise ship port at Tauranga in New Zealand’s Bay of Plenty sits about 4 miles outside of the city center. When we stopped there on the P&O Arcadia they had a free shuttle that would take passengers for the short ride to town. There was plenty to do within walking distance of the port for anyone who came with no prior plans or excursions booked.

view of Mount Maunganui from the ship’s stern

The cruise pier sat near the small town area of Mount Maunganui, the mountain itself looming large in the view off the stern.

ice cream shop at the pier

The smaller town was once independent of Tauranga, but was absorbed by the city after completion of a bridge between the two and is now officially a part of Tauranga. Besides the small shops you can see from the port area, Mount Maunganui also has a large shopping mall. The area is a popular vacation spot. 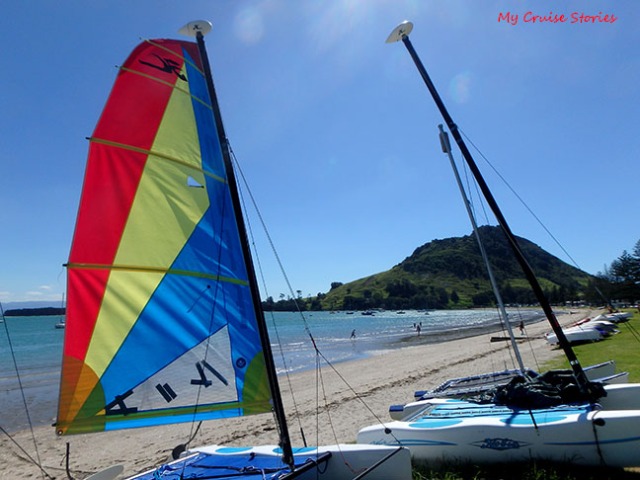 sailboats and other fun things for rent

A sand bar connects the mainland to the mountain – a lava dome created through an upwelling of lava several million years ago. There’s a great harbor beach running along the sandbar from near the ship to the mountain. People can swim there, rent kayaks, paddle boards, or sailboats, or walk the boardwalk to the mountain and hike to the top. Unseen from the port, the other side of the sandbar has an ocean beach popular with surfers. There’s a little ice cream shop at the end of the beach closest to the ship with a variety of unique flavors to choose from.

beachside boardwalk to the mountain

Lots of passengers from our ship hiked up the mountain. From bottom to top of the mountain some said they made it in under half an hour, others said it took much longer. All agreed the view from the top was spectacular. 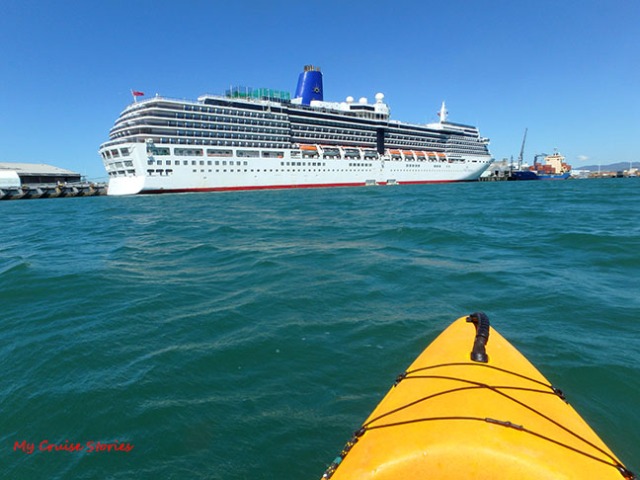 Arcadia from the kayak

We walked down the beach and rented a kayak after we got back from our excursion to the Hobbiton movie set. We paddled out fairly close to the ship and took some photos.

Tauranga also had some interesting and unique shore excursions available for those passengers who wanted to book one. We took the one to Hobbiton, the movie set for the Shire in Lord of the Rings and The Hobbit.

There are a number of geothermal features near Tauranga. Our ship offered a tour of Rotorua and the thermal valley and another geothermal tour to a place called Wao-O-Tapu Thermal Wonderland. Other excursions included Maori Heritage tours and Highlights of Tauranga.

Mount Maunganui from a dock near the ship – and seagulls

MyCruiseStories blog tells stories about adventures in cruising on ships big and small. Things to do onboard and in port. Anything connected to cruising. Also food, travel, recipes, towel animals, and the occasional random blog.
View all posts by LBcruiseshipblogger →
This entry was posted in Arcadia, New Zealand, P&O, Ports of Call and tagged cruise, Mount Mauganui, New Zealand, photos, ports, Tauranga, Tauranga cruise port, travel. Bookmark the permalink.