Posted on April 21, 2017 by LBcruiseshipblogger 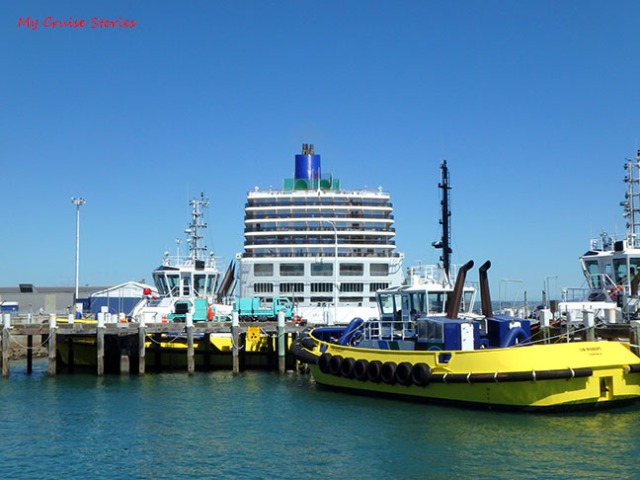 When our cruise on the P&O Arcadia stopped in Tauranga, New Zealand, one of the shore excursions offered went to Hobbiton, the film set for the Shire where the Hobbits lived in the Lord of the Rings and Hobbit movies. 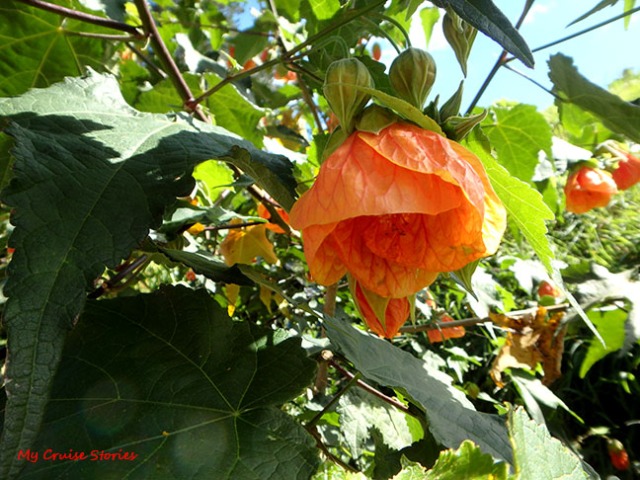 The bus ride from the cruise dock took about an hour through beautiful countryside with rolling hills covered in grassy fields. Near to town most had cows or horses, but once out into the country we started seeing the many sheep New Zealand is famous for. The country has way more sheep than people. In spite of that, and the fact that the set was built on a sheep farm, they imported sheep for the movie because they wanted a more rugged looking variety than the sort that already lived there.

The spaces in between farms and small stands of wild bush held Jurassic looking trees. Some looked like the fern trees we had previously seen in Australia’s Blue Mountains. Others resembled pine trees, only bigger and shaped more like a deciduous tree. Nearer the lowlands there were also some that looked something like miniature palms. The bus driver mentioned one area that held acres of wild bush where people could hike and camp. He said New Zealand has none of the poisonous snakes or spiders found in Australia so their bush country is much safer to hike through. 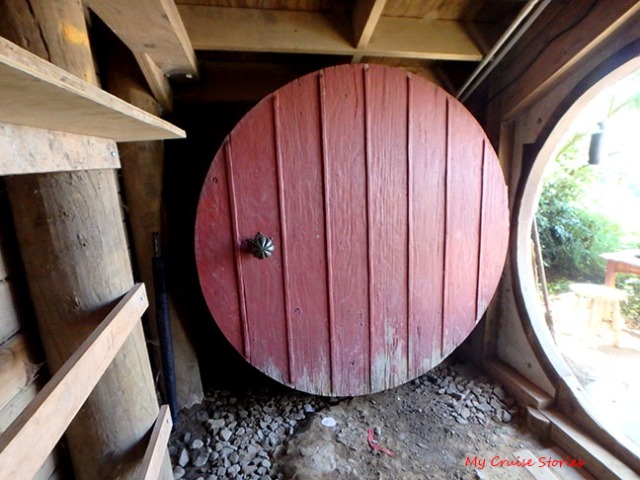 not much inside the open hobbit hole

After reaching Hobbiton the bus pulled into the parking lot, or car park as they are known in Australia and New Zealand. We arrived a bit early and the tour guide wasn’t ready so they let people browse through the gift shop for a bit. Once the guide came the bus moved on while the guide explained how the film people had scouted the land on the Alexander’s 1250 acre sheep and beef farm near Matamata. When they came back knocking on the door to ask about filming Lord of the Rings there the owner replied with “Lord of the What?” 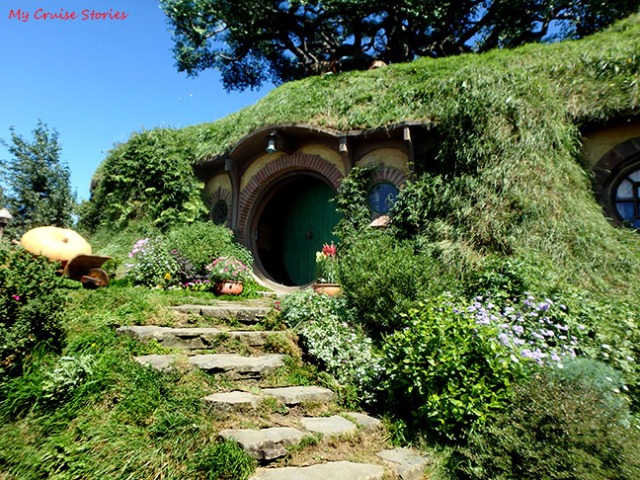 stairway leading up to Bag End

The youngest son had read the books and told his dad. “Sign, it’s a gold mine.” He now runs the tourist operation while his older brother runs the farm. That knock on the door must have been like winning the lottery for the Alexander family living there.

the tree on top of Bag End looks real

Great care was taken through all the details of Hobbiton. They have 39 hobbit holes, all with working electric lights. Bag End where Bilbo and Frodo Baggins lived sits at the top of a hill, the biggest of the hobbit holes there. The large oak tree on top of Bag end was cut down nearby and wired with artificial leaves for the filming of Lord of the Rings. Since The Hobbit story took place 60 years earlier they replaced it with a smaller, younger looking tree of steel and silicon construction.

mill and bridge across the lake from hobbit holes

The mill and bridge were originally made from scaffolding, plywood, and polystyrene, but in the 2-year reconstruction of Hobbiton for The Hobbit they used permanent materials and now keep the 12-acre set maintained. It took just 12 days to film the Hobbit trilogy. 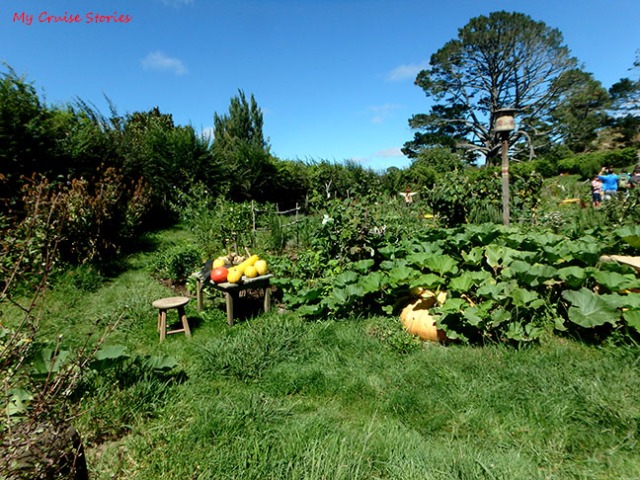 In between The Lord of the Rings and The Hobbit the movie set sat empty and abandoned. It was only after filming The Hobbit trilogy that it became a tourist attraction. 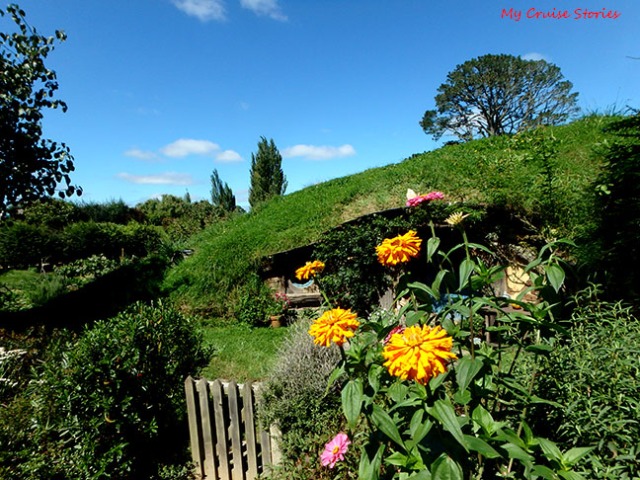 During the tour we walked through the set where hobbit holes dot the hillside. Each one is staged with different things out front. One had jars of honey, another painting supplies, and yet another had fish hanging to dry. All had little gardens with flowers and round doors and windows.

cozy home for a hobbit

Some had clotheslines with their little laundry hanging out to dry. Between the hobbit holes some areas had vegetable gardens. One area had fruit trees which the guide said were actually apple trees, but for the movie they hung artificial plums on the trees for a 5-second scene. Mostly the pathways wound their way between the hobbit holes, but here and there a path crossed over a bridge. 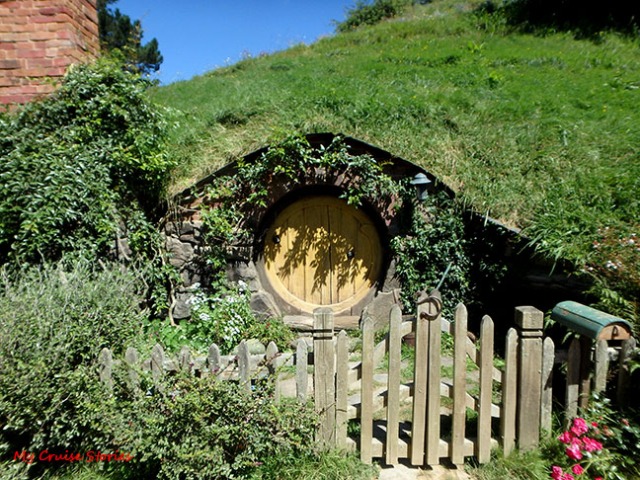 Near the end of the hobbit holes we came to a group of 3 called Bagshot Row. The one with a yellow door belonged to Sam in the Lord of the Rings. 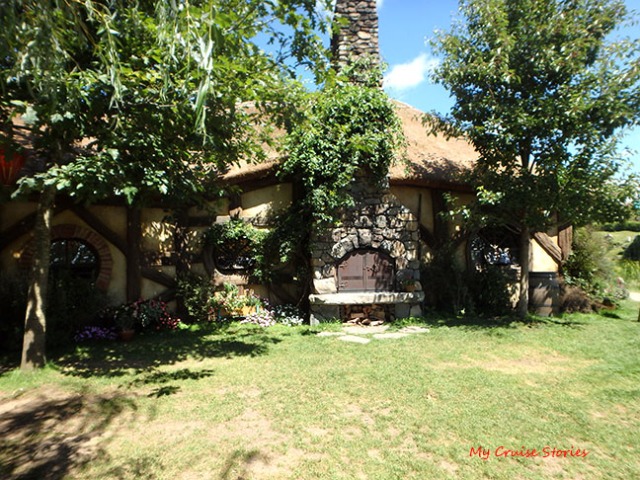 The Green Dragon Inn is a fully functional restaurant

After making our way through the hobbit’s living areas we crossed the big stone bridge past the mill. The mill had a working waterwheel. The Green Dragon Inn sat on the other side of the bridge and everyone on our tour was given a complementary beverage of their choice.

bar inside the Green Dragon

Options included several beers or non-alcoholic ginger beer. Outside behind the inn under canvas pavilions cruise ship passengers were also each given a large scone and a dessert where options included coconut covered cake squares called lamingtons, a regional favorite we first discovered at the airport in Fiji on a previous vacation and later saw in Australia. 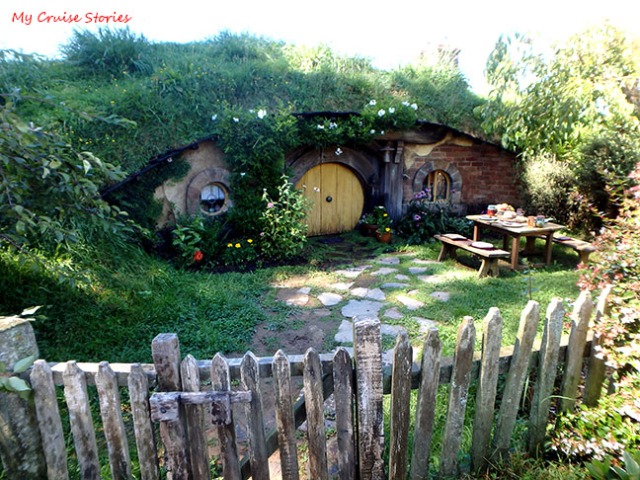 Cruise ship passengers can book the tour on their ship. Visitors to Matamata or Rotorua can catch tour busses there. People can also drive to the farm on their own. Hobbiton is just one of 20 sites New Zealand has scattered around the country where different scenes from the movies were filmed.

MyCruiseStories blog tells stories about adventures in cruising on ships big and small. Things to do onboard and in port. Anything connected to cruising. Also food, travel, recipes, towel animals, and the occasional random blog.
View all posts by LBcruiseshipblogger →
This entry was posted in Arcadia, New Zealand, P&O, Ports of Call, Shore Excursions and tagged cruise, fun, Hobbiton, Hobbiton movie set, Lord of the Rings, New Zealand, photos, Tauranga cruise port, The Hobbit, things to do in Tauranga, travel. Bookmark the permalink.