Posted on December 2, 2016 by LBcruiseshipblogger 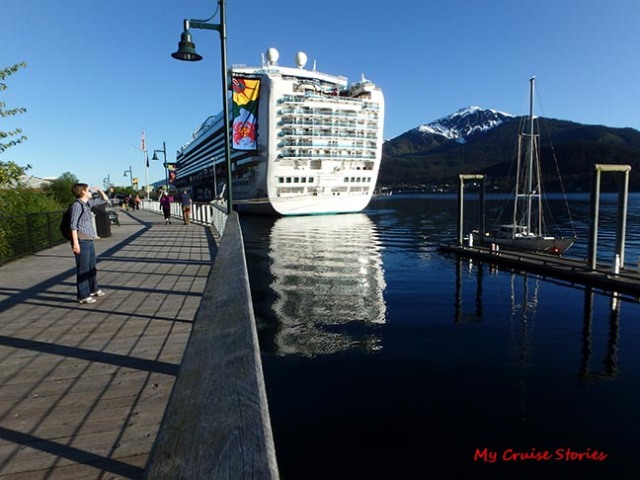 boardwalk by Ruby Princess in Juneau

Ruby Princess arrived in Juneau at lunchtime after an early morning glacier watching cruise through Endicott Arm as a substitute for nearby Tracy Arm, the entry to which had been blocked by ice bergs. Lunchtime is not the best time for a cruise ship to arrive in port. The ship was a madhouse of passengers eager to disembark. The line to the gangway snaked all the way from one end of the ship to the other and back again before the ropes even secured the ship to the dock, long before the door opened to let anyone out. 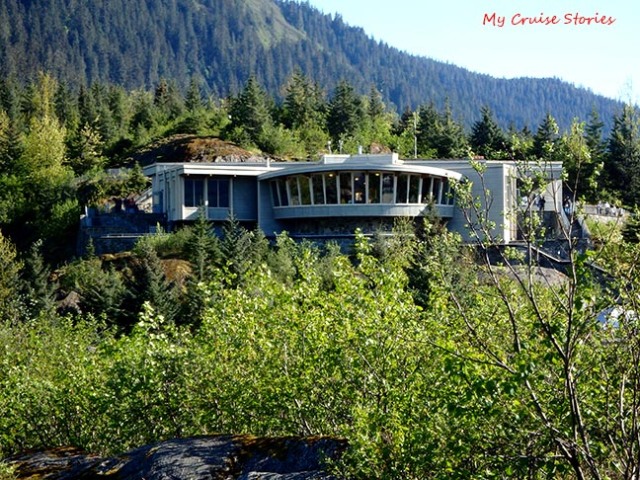 My sisters and I decided that rather than stand in that very long line for ages getting more frustrated by the minute we would go up to the Lido buffet and take a lunch break, after which the line to the exit would not be nearly so long. So instead of standing around griping about lines for the next half hour or so we relaxed with a good lunch and then walked right off the ship just behind the tail end of that formerly long line without having to wait. We probably got off fairly close to the same time we would have anyway, but with our time much better spent. 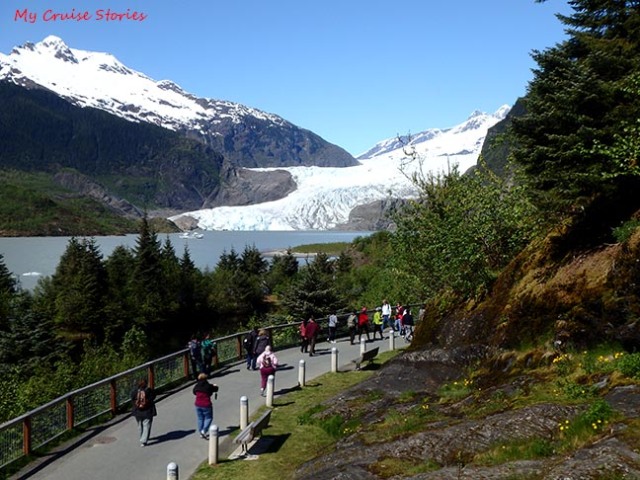 trail from the visitor’s center to the waterfall

Princess has their own dock in Juneau now, new since last I was there. It’s just a short way down a boardwalk from where the Holland America ships dock near the Mount Roberts tram station at the center of the touristy area of town. Instead of the expected people with signs for last minute tours we had seen on our last visit, there were booths next to the tram building. Several different companies have busses out to Mendenhall glacier among other excursions they offer. You have to buy a round trip ticket at the booth because they aren’t allowed to sell them out by the glacier which means you have to return with the same bus company you go there with. The city bus costs less, but its closest stop is over a mile away from the visitor’s center so saving money over what the busses directly to the glacier cost involves a long walk. 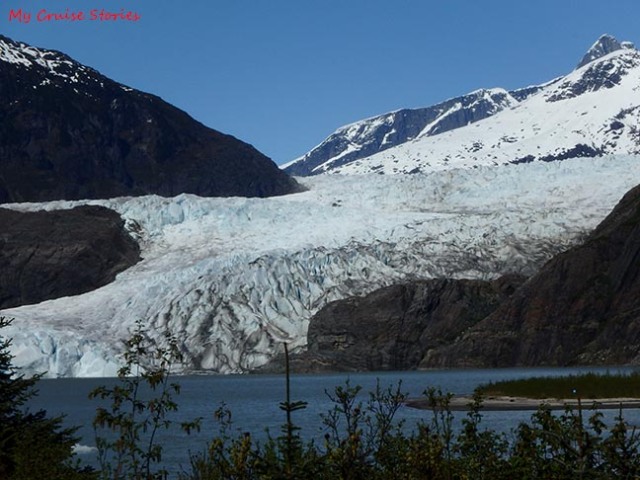 From either the ship or the booths, the activity that gets people closest to the face of the glacier is a canoe excursion on Mendenhall Lake. On our cruise it would have been about $30 cheaper to book the canoe last minute on the dock, but not everyone wanted to spend that much money so we just went with the bus to the glacier visitor’s center. From there you can hike a trail out to Nugget Falls and to a closer view of the glacier – which gets slightly farther away each year as the glacier recedes. The glacier views both from the visitor’s center and the trail are still good for now though. 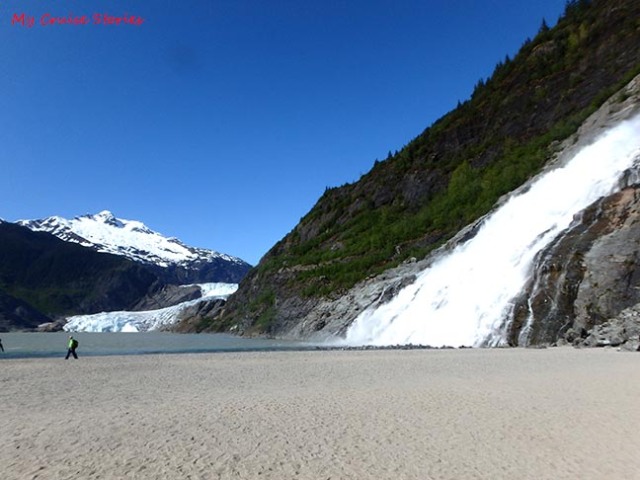 The visitor’s center restroom down at the trailhead has something I’ve never seen before – a sink with a faucet that both washes and dries. We hiked out to the falls, which is the closest to the glacier you can get without taking the canoe excursion or some sort of helicopter excursion that puts you on top the glacier. I’ve always wanted to do the one that takes you dogsledding for real out on a snowy glacier, but since it takes a helicopter to get there that excursion is just way too expensive for me. The ships do offer a wheeled dogsled on trails for a price I’d pay for a real dog sled on snow, but more than I’d pay for what it is. 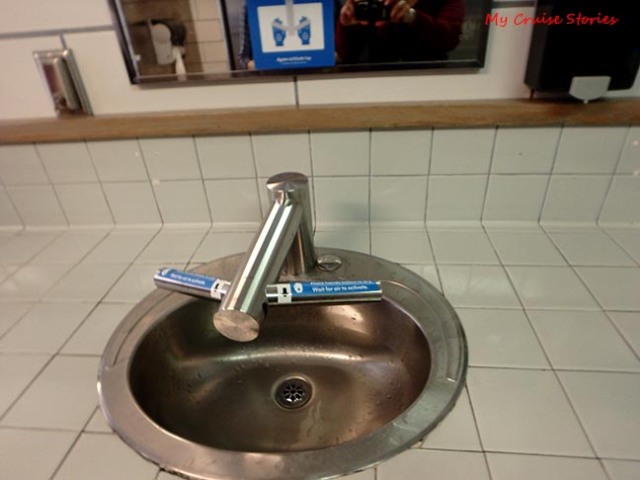 On the way back we took a side trip down another trail which went past a large hole in a rock with a sign that said the waterfall had dug that hole back in the days when it came straight out of the face of the glacier on that spot. Farther back in history than that Mendenhall Lake did not exist. The entire area that is now lake was once underneath the glacier. Back then people drove right up to it. Probably not the safest thing to do should they be standing next to it when a piece broke off. Pieces do break off and dot the lake with little ice bergs. I suppose the canoes have to watch out for that. 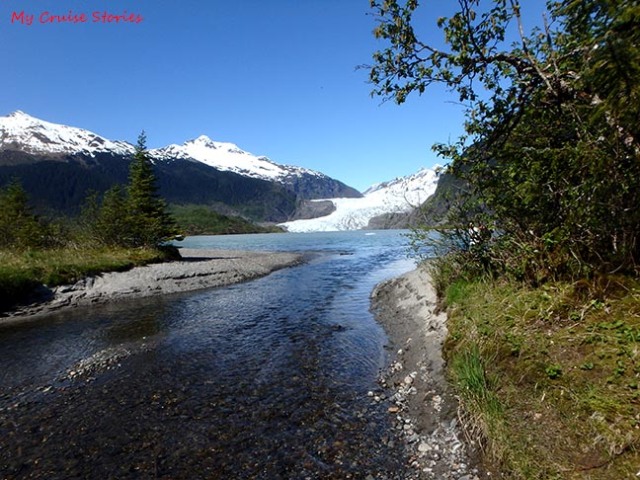 river by the trail

We were there on a warm day, but it still got cold out by the glacier. The visitor’s center has several displays, a gift shop, and a 15 minute movie. They also had a TV which showed the recession of the glacier over the last 10 or so years. I don’t remember the exact number. The visitor’s center also has several glacier viewpoints in and near the center as well as the viewpoints on the trail. The trail out to the waterfall is the most used trail there, but it does have other trails available for anyone who wishes to hike them. The trail out to the falls is mostly level and wide enough people on scooters had no trouble getting out to the falls. We saw several scooters there. 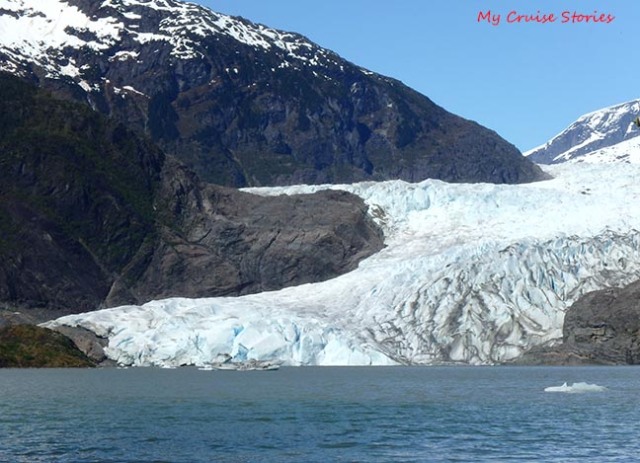 You can take excursions from the ship that stop at the glacier visitor’s center, but besides costing more you don’t get as much time to spend there because they will go somewhere else as well. We stopped by on a previous visit after a tour of the lovely Glacier Gardens and had to choose between a brief trek to the falls or going inside the center.

MyCruiseStories blog tells stories about adventures in cruising on ships big and small. Things to do onboard and in port. Anything connected to cruising. Also food, travel, recipes, towel animals, and the occasional random blog.
View all posts by LBcruiseshipblogger →
This entry was posted in Alaska, Port Cities, Ports of Call, Princess, Ruby Princess and tagged Alaska, bus to Mendenhall Glacier, cruise, glacier visitor's center, Juneau, Juneau cruise port, Juneau on your own, Mendenhall Glacier, photos, Princess, travel. Bookmark the permalink.