Posted on July 14, 2012 by LBcruiseshipblogger

Juneau offered more shore excursions that we wanted to do than any other port, and our ship spent the least time there.  We wanted to see a glacier up close.  Our first choice would have been dogsledding, but to do any real dogsledding out on the ice and snow of a glacier involved taking a flight that for the three of us would have cost more than our entire cruise.  The less expensive dogsledding tours weren’t real dogsledding at all, but wheeled sleds on dirt trails, on the dog’s summer exercise and training type sleds.  We could have taken a bus tour to Mendenhall Glacier, and probably would have, but then we came across a brochure about a scenic river raft trip.

“See Mendenhall Glacier from the water,” it proclaimed, conjuring up visions of rafting among the icebergs below the glacier, looking up at a towering mass of ancient ice overhead.  That sounded like a much more fun way to see the glacier than a bus tour.  We also couldn’t resist buying tickets for the Mount Roberts Tramway, as they did not cost very much.  We hoped to have time to use them, figuring we definitely wouldn’t have time to wait in line for them when we got done with the raft trip.  And the person at the shore excursion desk did say we could return them if we didn’t use them.

The Norwegian Sun was one of the bigger boats touring around Alaska at the time.  We saw a Princess boat or two about the same size at some of the ports, but everything else looked considerably smaller.  Juneau had a dock a short distance from town for the larger ships like ours.  Shuttles ran back and forth to town.  We got on the bus for the raft tour.  It stopped in town to pick up some more guests from the smaller Holland America boats docked right at the base of the tram in the touristy part of town.  That’s where the shuttles go, the driver explained, in case anyone wanted to get off there after the tour.

At this point in time, Sarah Palin was still governor of Alaska, after her failed attempt to win the vice presidency.  As we drove past the governor’s house, the tour guide made a point of saying that in Alaska governors are real people and live in a house like everyone else.  A nice house, but they don’t get a mansion.

“Traditionally,” the guide said, “They’ve always kept chickens in the back yard at the governor’s house.  They’re gone now though.  Shortly after the lost election Sarah Palin had a big party and invited all sorts of people from town.  She served up chicken cooked in a variety of ways.  When asked why she had all the chickens killed she replied that she couldn’t get any peace and quiet with them all out there saying Ba-ROCK,  Ba-ROCK all the time.”

I have no idea if there was a shred of truth to this, but it definitely made a good story to tell a busload of tourists, most of whom had never seen Alaska before. 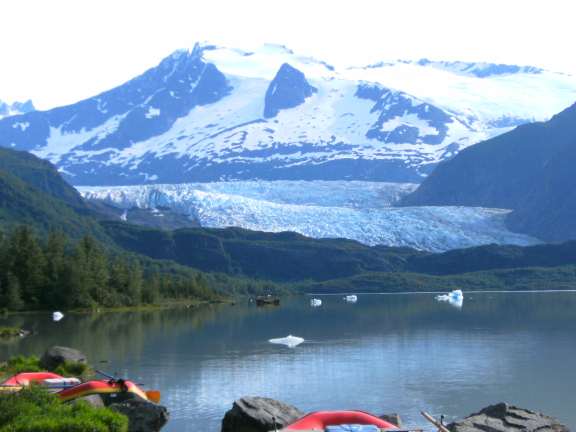 The bus pulled up on the shores of a frigid lake sparkling in the sunshine, where everyone donned rubber boots and rain suits.  Rain or shine, raingear is standard attire for the raft trip.  We walked down to the beach where the guides divided people into groups for each of the waiting rafts.  Off in the distance, we could see Mendenhall Glacier, a large white speck on the hillside.  When asked if we would get better views later, they said no, this is the only place we see it at all.

The lake did have some bergy bits floating around, but nothing large enough to consider an actual iceberg.  Up until this point, all the shore excursions we had ever taken had always met our expectations.  This was the first time we encountered exaggeration in the description.  It’s not an isolated thing though, on a later cruise on a different cruise line I took an excursion that downright lied about what to expect.  One would think they would tell the truth because customers who get the excursion they intended to purchase leave happy, customers who don’t leave disappointed.  And they tell other people.

It’s not that we didn’t enjoy the raft trip, because we did.  It’s just that we went to Alaska with glaciers in mind, and now had passed on our opportunity to see one up close.  I felt a bit guilty about this because this was my pick on the excursions.  We did learn that rather than taking a ship’s bus tour to the glacier, a person could just catch a bus to the glacier from the town square sort of place where we picked up the Holland America passengers.  Far cheaper that way.

Unlike a white water raft trip I took later, on this scenic float the guide did all the rowing.  On the white water trip everyone had a paddle.  On this float the guide had a set of oars.  The rest of us just got comfortable and enjoyed the view.  We saw swallow nests in the side of a cliff with swallows flitting about, and eagles flying around overhead.  The guide talked about the native fauna and flora of the area.  He explained that for the most part they navigate around fallen logs and things to keep the river as natural as possible.

bridge on the scenic river float

During the mostly smooth ride, we did hit one small patch of minor riffles.  Justin was very disappointed that it didn’t get wilder.  He probably didn’t know the difference between scenic float and white water rafting when we chose a raft trip, although had it gotten too wild he wouldn’t have liked that either.

At a bend in the river, we came to a wall of cars.  Apparently at some point in the past, Juneau had issues both with an eroding riverbank and nowhere to put junk cars.  They thought they’d solve both problems by using the junk cars to buffer the riverbank and keep the water from eating it away.  Now though, they’ve had some environmental problems with the car bend.  It did make something pretty interesting to see along the way though.

At the take-out point we had a snack and traded our raingear and boots for our shoes.  The bus took us back to the town square just in time for a brief ride on the tram.