Posted on September 23, 2016 by LBcruiseshipblogger

The duck tour in Ketchikan has nothing to do with quacking birds.  It’s an amphibious vehicle. Some places use former military vehicles for duck rides. The ducks in Ketchikan are custom made for the tours because the military variety are not suitable for all possible weather conditions of their waters. The top portion of the vehicles is clear, with portholes all along the passenger area which people can open or close as they wish according to weather conditions and whether or not they want open space for photos not taken through the window.

Ketchikan Duck in the water

Passengers can book the duck tour through the ship, as we did on the Ruby Princess. Tickets are also available at the visitor’s center or the nearby Quack Shack. The ducks pick up passengers who booked through the cruise line right out in front of their ship. The tour takes about 90 minutes. It starts with a short safety spiel along with the option to buy duck bill shaped quacking whistles.

Inside the duck – with quack whistles overhead “in case of emergency”

The land portion of the tour includes a brief history of the areas the vehicle drives through as well as information about things like how much salmon is processed there, different sorts of fishing boats, and a bit about wildlife, the people and the land. 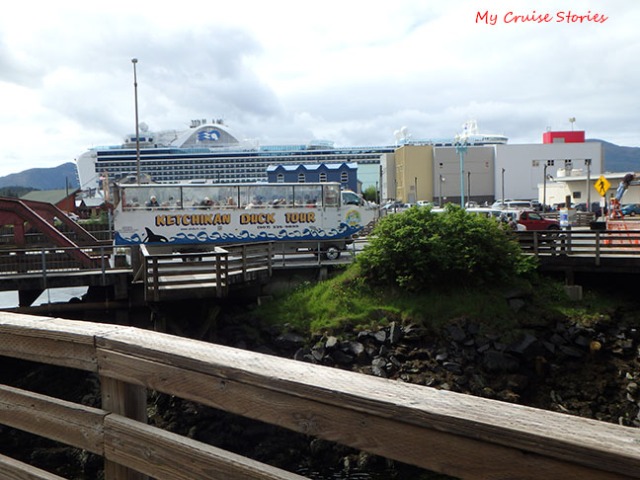 Photo of the duck taken from Dolly’s house – while people on the duck took photos of Dolly’s house.. You can see how close the dock is with Ruby Princess in the background of the photo.

The duck made a brief stop at Creek Street with a chance to photo someone dressed up as Dolly Archer standing in front of her house. Apparently our guide didn’t know the funicular accessed from Creek Street was closed for repair since he talked about it as if people could go take a ride to the hotel/restaurant at the top of the tracks up the steep hill. It was out of order the last time I visited Ketchikan several years ago too, but looked as if it had been used between then and now so perhaps they have to fix it up at the start of tourist season each year. I did find funiculars that work in Quebec City and Valparaiso. Funiculars take people up steep hills on railroad style tracks.

duck driving down the boat launch

At a marina in an area the guide called Bar Harbor (NOT Bah Habah the way they pronounce it in Maine) the duck drove down a boat launching ramp and into the water. As the duck headed toward the Princess ship we saw a small tug towing a large floating house going past us in the opposite direction. Of course it was on the other side where it was hard for us to get a picture since all the people on that side of the duck had their cameras up. One of my sisters managed to lean over and get a photo through someone’s porthole.

We passed by lots of float planes tied to docks, most of which do flight seeing tours once the tourist season gets fully underway. On the other side we passed an island which mostly looked like trees, but had an area with a glimpse of the runway at the airport of the infamous bridge to nowhere debacle. I can’t remember what the actual name of that island was, but the guide jokingly called it Nowhere, Alaska and said that even if the bridge-building idea hadn’t been killed by politics that logistics and cost would have killed it anyway.

view of Creek Street from upstairs inside Dolly’s house

Just as we almost got to where we’d be in position to get some really good ship photos very soon the duck turned around and headed back. When we got back to the launching ramp we found it occupied by a small truck attempting to retrieve a large boat from the water in a low tide that left the ramp steep and slippery with seaweed. Another duck boat joined ours in circling around waiting for ramp access while the unfortunate boater tried several times before finally succeeding to get his boat loaded. His truck struggled slowly up the ramp before he finally drove away leaving it clear for the ducks to exit. 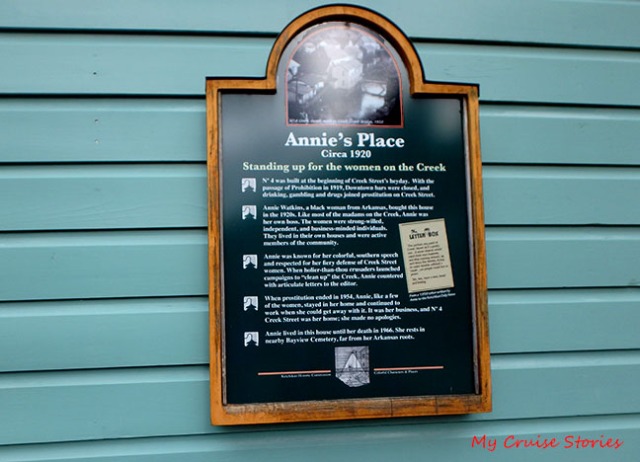 The driver approached the ramp at an odd angle because someone had left a very small boat tied to the end of the dock hanging out over the ramp. The ramp is just wide enough for the duck so driving straight up would have meant hitting the little boat – which the owner could easily have tied on the far side of the dock which was wide open and totally out of the way. Unlike the too small truck with the too big boat the duck had no trouble driving up the launching ramp. At the top our duck pulled over into a parking lot and the guide jumped out to hose the salt water and seaweed off the wheels. The driver took over entertaining the tourists. The other duck came up the ramp and went straight on out to the street. Soon the guide got back in and they returned everyone to the ship where we had plenty of time to explore the town.

Things to do in Ketchikan

Creek street, so named for the creek where other places have a street, is a row of former brothels which are mostly shops for tourists now. Some have signs about the women who formerly lived and worked in those houses. One of them, Dolly’s house, is a museum preserving her furniture and belongings as the house was when she lived there. She was the last working gal on the street, retiring after age 70.

The sign said it cost $10 to walk through Dolly’s House, but they let us in for $7.50 each. There are TV’s in a couple of the rooms that continuously play information about Dolly and her life in a loop. The kitchen has the latest and greatest modern appliances – when they were new. They look quite old-fashioned now. Dolly had places to hide liquor during prohibition and some interesting decor. 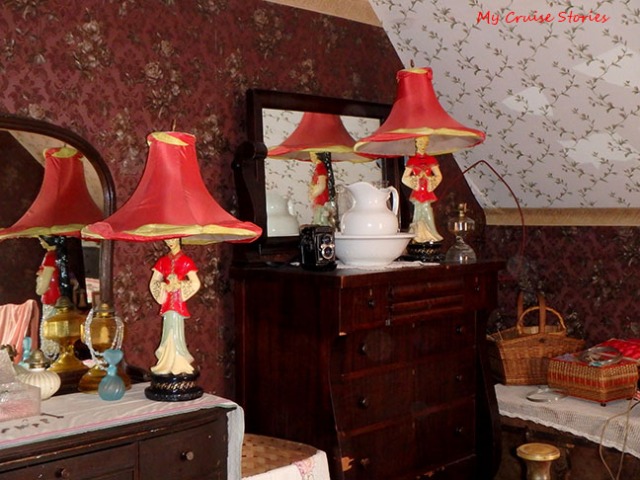 Ketchikan has lots of souvenir shops. There’s one on the pier and many more across the street and on all the nearby streets to the pier. The jewelry stores all seem to mark the prices way up high and then tell you it’s a bargain at about a quarter of the price. Some shops sell local handmade things. Things made by natives are marked with a bear symbol tag. Some things made in Alaska do not merit the native made tag because they are made by other Alaskans not from the native tribes. Other things are made in China and some of the Chinese knock-offs of Alaskan products have a knock-off bear symbol similar to the native made tag so if the price seems low for an Alaskan made product look it over carefully because it may say made in China. 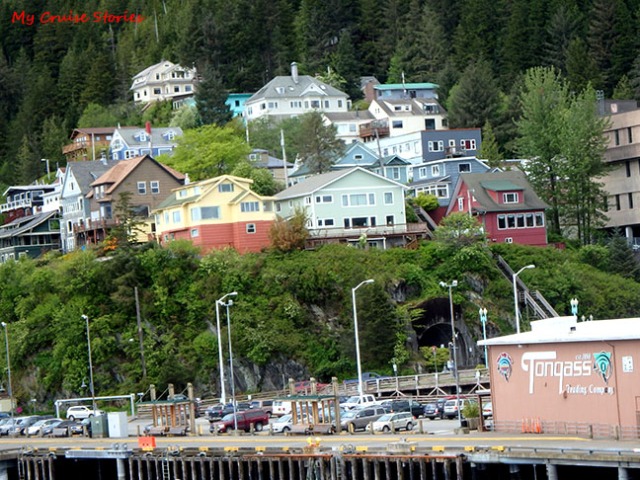 There’s a visitor’s center right next to the cruise ship dock with lots of tours available for people who didn’t book anything on the ship. We also saw a few people with signs for tours and since we were the first ship of the season there may be more people offering a wider variety of things as more ships come to town.