Posted on May 11, 2018 by LBcruiseshipblogger 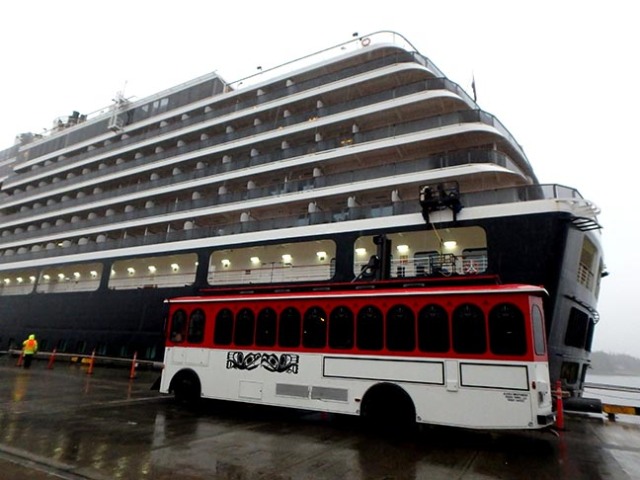 Trolley by Oosterdam in Ketchikan

Snorkeling in Alaska? Brrrr. Way too cold. That’s what a lot of people think. I used to be one of them. If you went straight into the water in just a swimming suit like in tropical areas they’d be right. But you don’t. At snorkelalaska.com snorkelers are provided with 7ml full body wetsuits, boots, hoods, and gloves. We went on a cold and rainy day with weather bad enough that our friend’s flightseeing trip got cancelled. In spite of the cold wet day we stayed warmer in the water than out. It’s actually a good excursion for a rainy day because if you’re going to get wet no matter what you do you might as well get wet intentionally. It rains a lot in Ketchikan so it’s nice to book something you can do on a rainy day. It’s even better if you get to do this excursion on nice day. 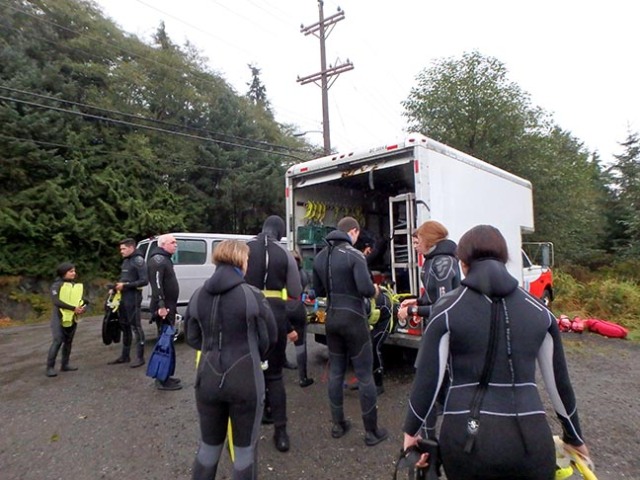 passing out the snorkel gear

If you come to Ketchikan by cruise ship you can book this excellent snorkel adventure through your ship. On the Holland America Oosterdam it was called Mountain Point Snorkeling Adventure, same as on the snorkel Alaska website. Wear a swimsuit under your clothes when leaving the ship and remember to pack a towel and underwear so you can dry off and change after snorkeling. There’s an optional outdoor shower and hot chocolate available for everyone at the shop where it starts and ends. There’s also the option to buy souvenir hats and t-shirts. 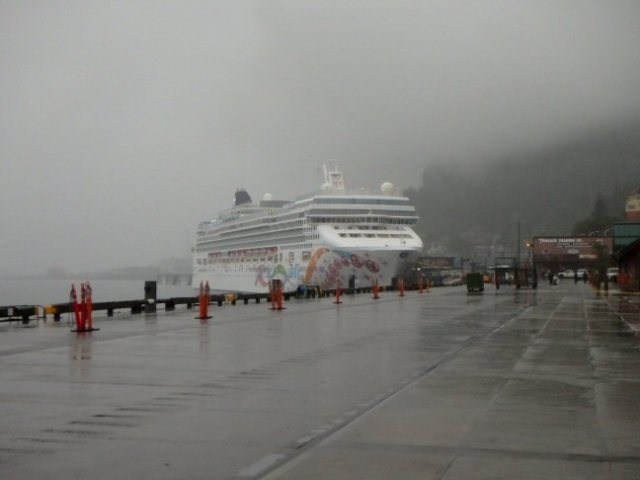 Norweigan Pearl in the fog on a rainy day in Ketchikan

We went with a mixed group of people from the Oosterdam and Norwegian Pearl. Mostly from the Pearl. Snorkel Alaska people picked us up in a van near the cruise ship docks. First we stopped at their shop for instructions and suiting up. They have quite a quantity of supplies and handed out wetsuits according to height and weight and boots according to shoe size. The most difficult part of the whole adventure is getting the wetsuit on. Their most important instruction is to put the zipper in the back. There’s always that one person who didn’t pay attention, puts the zipper in front, and then has to start over. Well in our group there was anyway. 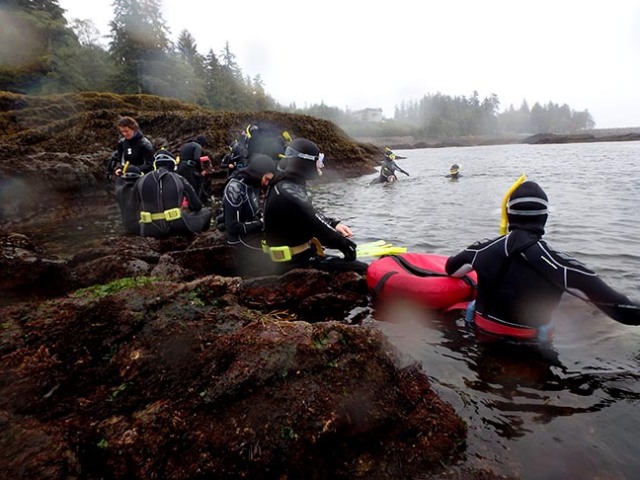 Once suited up fins and masks were handed out from a truck. They also had optional weight belts for people who wanted to be able to dive down a bit. Wetsuits are buoyant so weights help you to get underwater when wearing one. Anything not needed last minute stayed at the shop. Phones and non-waterproof cameras could come out to the beach for last-minute photos and then get left with the vans. Waterproof cameras could of course come along for the entire adventure. 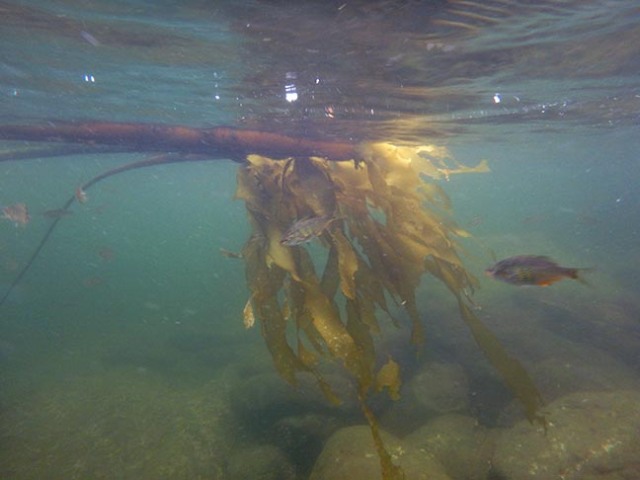 A short van ride from the shop brought us to Mountain Point, the snorkeling site. A trail led through some trees to the rocky beach and somewhat of a natural stone stairway at the entry point into the water. There the guides helped with masks, fins, and gloves and got everyone into the water. When everyone was ready we all set out following a guide to places where they knew we would find interesting things to see. 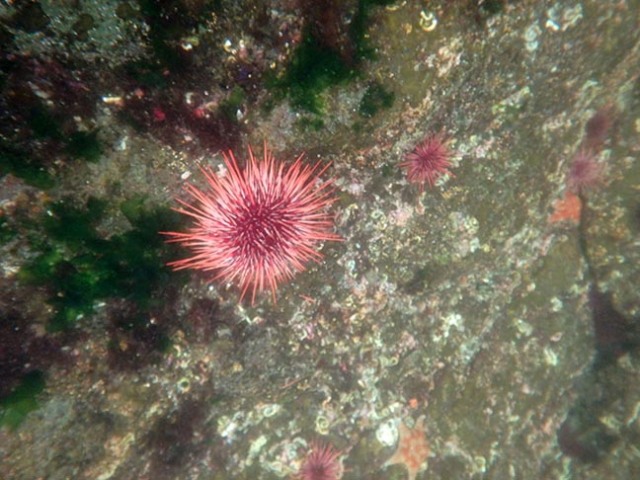 sea urchin under the water

Alaska may not have the coral you see when snorkeling in the tropics, but there is plenty to see. There was a lot more color than I expected. Rocky areas had brightly colored starfish and sea urchins. Some of the deeper spots had seagrass where lots of little fish and some crabs found places to hide. Seaweed grows on some of the rocky walls lining the shore. It looks much prettier standing under the water swaying with the current than it does lying flat on the rocks when exposed by the tides. 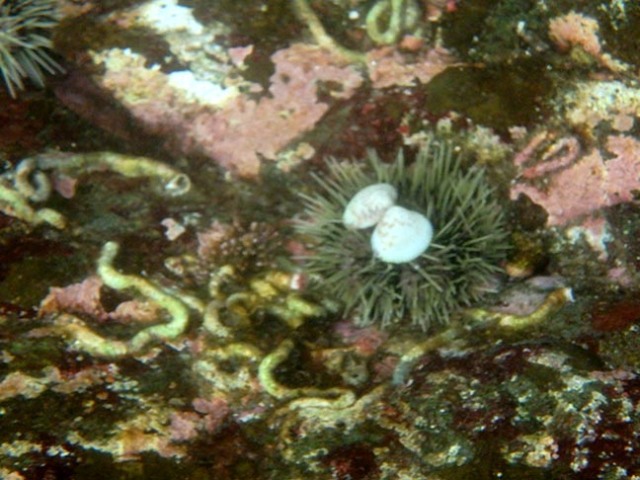 One urchin had a couple little clams open on top of it. I asked the guide who would be eating who and she said urchins are vegetarians and the clams might have just found a place to sit. There were lots of clam shells at the bottom and a very large clam clinging to the side of a rock. 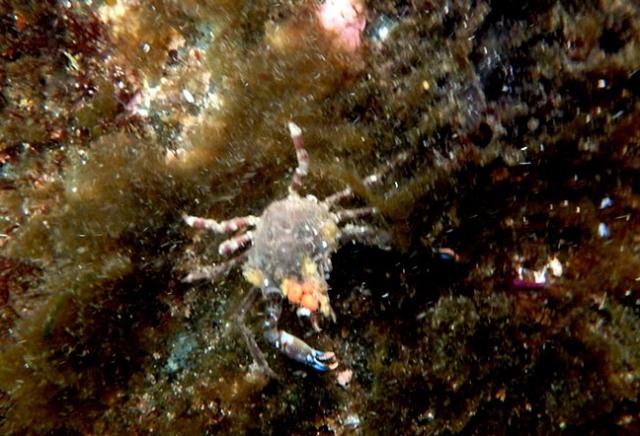 crab under the sea

I also saw a variety of crabs large and small and a few snails. Some of the sealife is brightly colored and some is not. The starfish and urchins are mostly quite bright, but there were a few white sea stars. The sea urchins came in red and purple and ranged from fairly small to quite large. Starfish too came in many sizes, mainly orange, red, or purple. 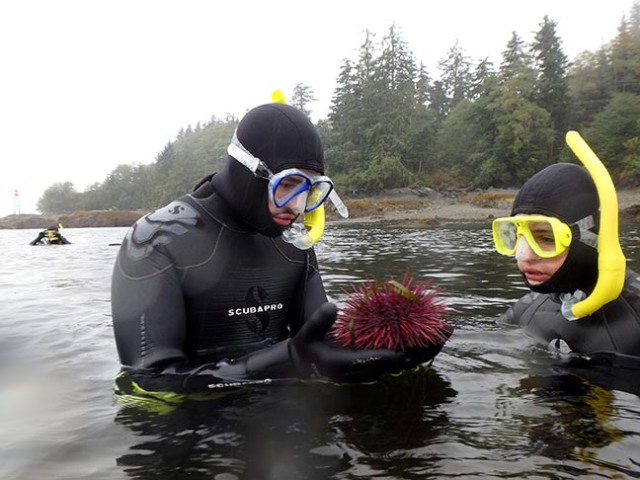 snorkeler with a sea urchin

We started out in a sheltered cove with rocks all around and very few waves. After a snorkeling around a bit the guides gathered everyone up and brought up things like sea urchins and starfish to show people above the water. 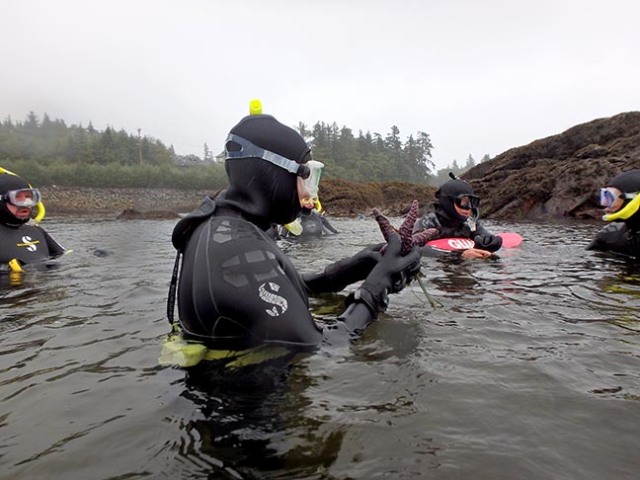 snorkeler with a starfish

Later people who wanted to went outside along one edge of the rocks where the water had more movement. There a small crab clung to a clump of seaweed bouncing in the waves. Here and there kelp grew tall with long fronds trailing down from the surface. Some schools of small fish swam about while other fish stayed near the safety of the rocks. 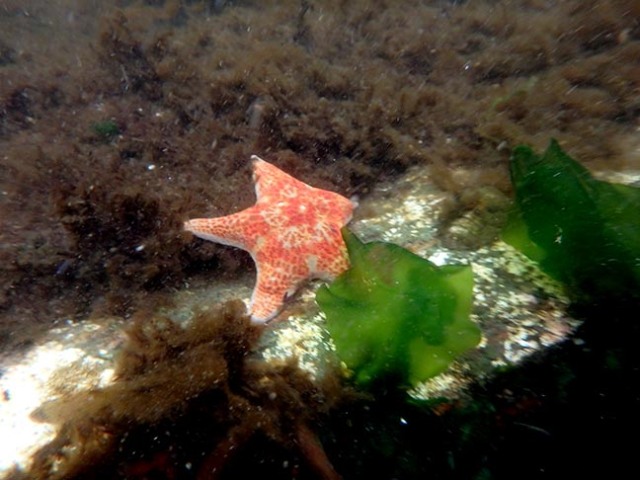 starfish under the sea

When everyone finished snorkeling the vans brought us back to the shop where we were asked to take the boots off before going inside to keep the water in them off the shop floor.  Wetsuits were optional for taking off inside the shop or out, just as the outdoor shower was optional. Clothes and towels sat in the dressing rooms in the exact spots where people left them. 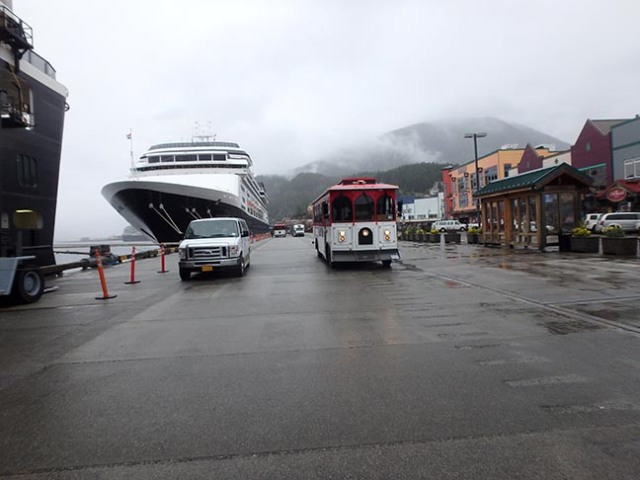 trolley at the cruise ship docks in Ketchikan

Once people finished with showering and changing there was time to enjoy free hot chocolate and browse the gift shop. The adventure ended with a trolley ride back to the ship. For anyone visiting Ketchikan, whether by cruise ship or not, this is definitely a fun adventure worth doing while you are there. Whether you have snorkeled before or not, I’d recommend it either way. 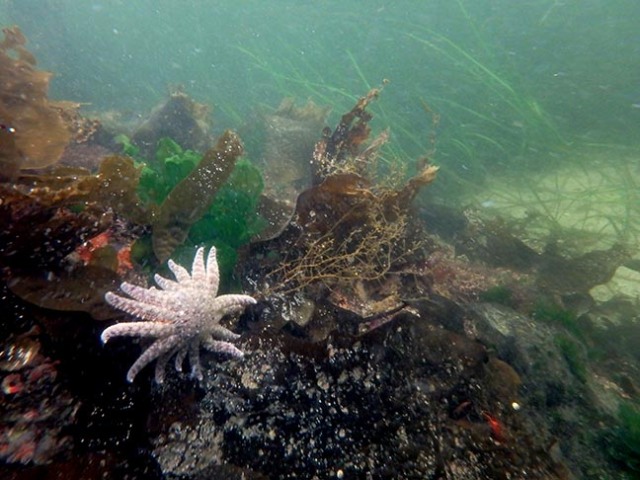 2 Responses to Snorkeling in Alaska