Posted on November 27, 2015 by LBcruiseshipblogger

Bar Harbor (pronounced Bah Habah by the locals) may have its prime tourist season when people come to see the trees in their glorious fall colors, but it is a nice place to visit earlier in the season as well. We came in May on one of Holland America Veendam’s earliest cruises for the New England cruising season. The ship anchors up just outside of town and smaller boats called tenders – which are also used as lifeboats – bring passengers to shore. A walk up the dock brings the visitors to the main touristy area full of quaint shops in charming wooden buildings from Bar Harbor’s heyday as a playground for the wealthy in the late 1800’s to early 1900’s. The gift shops carry plenty of lobster related gift items and the area’s signature dish, lobster rolls, were available at a restaurant right on the dock.

Our first view of Bar Harbor from the dock area

In our pre-cruise planning we had thought of taking a trolley tour with Oli’s Trolley, which you could either book in advance or just wait to get off the boat and sign up at their office near the dock assuming they had openings. We decided to wait on the weather rather than booking in advance. The forecast called for rain and we imagined open sided trolleys so we went with a bus tour to Acadia Park from the ship instead. We ran into someone later in the day who said they had done the trolley tour and it was closed in rather than out in the open like those we have seen other places so it would have worked out fine if we had taken that tour. 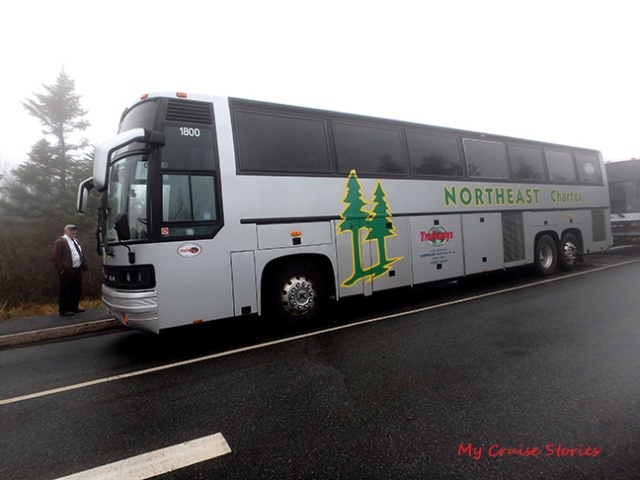 My aunt was quite excited when she saw trees painted on the side of our tour bus. She had accidently sent my mother a message mentioning the tree shuttle at our hotel in Boston when she meant free shuttle, so here we had an actual tree shuttle ready and waiting for photos. Later on the cruise we saw crew people wheeling some potted trees out to the dock to set up for photos, a very literal tree shuttle since they were actually shuttling trees.

Some of the remaining mansions are hotels now

On the way out of town our driver told us a bit about the history of the region. At one time lots of big mansions occupied an area on the outskirts of town. Some of those and part of Acadia park burned in a huge fire in 1947. Now smaller homes of 1950’s construction fill the formerly burned area where mansions once stood. The fire did not extend to the entire town so some mansions remain in the unburned area. Famous people like Martha Stewart still have homes in Bar Harbor, but it’s not exclusively a rich area like in the past. Bar Harbor’s earliest vacationers stayed in local’s homes, then hotels got built. As other people who stayed shorter times started coming to the hotels the “seasonals” built their own mansions to avoid the tourists. The fire brought an end to that era.

Evergreens in the mist

Evergreens come back last after fire, so the abundance of birch trees make fall colors spectacular in the burned area, though enough time has passed now that the evergreens have started to return and eventually that area will look the same as the rest of the park.

Due to the foggy day our tour guide would say to use our imaginations as she pointed out where the sights should be and we looked out the windows to see the immediate roadside and fog shrouding whatever distant interesting thing we couldn’t see. As we passed the sandbar to Bar Island (taking her word for it as we could not see the water at all) she said that in a low tide people could walk across the sandbar and it was what gave the town of Bar Harbor its name. People have lost their cars driving across and parking on the sandbar, only to have the tide come in and wash their cars away. 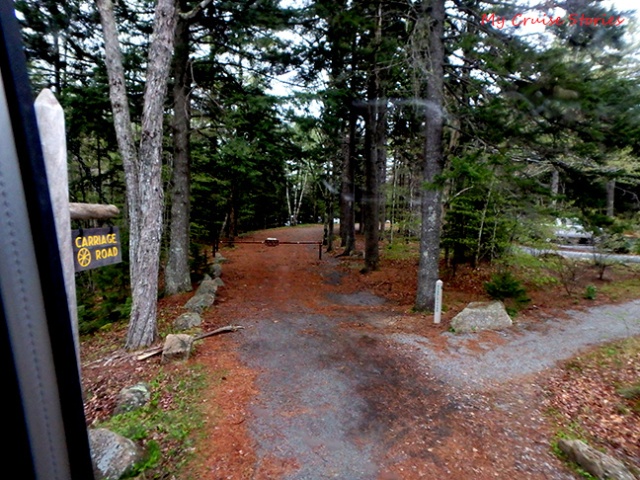 an entrance to the carriage roads

Acadia National Park takes up much of the land on Mount Desert Island, the second largest island on the east coast. The park also has land on some nearby smaller islands as well. It is the oldest national park east of the Mississippi. Some of the land for the park was donated by wealthy people who once spent their summers in the area. One of the park’s biggest supporters was John D Rockefeller Jr. who built 50 miles of carriage trails including 17 granite bridges, much of which is still in use today.

At the top of Cadillac Mountain

Our bus climbed to the top of Cadillac Mountain. On a clear day we would have had an awesome view, but we mainly saw mist in the nearby trees. We got out and walked around a bit. On the way back the bus took a different road and our guide pointed out one of the granite bridges as well as an entrance to the carriage trails where motor vehicles are not allowed. 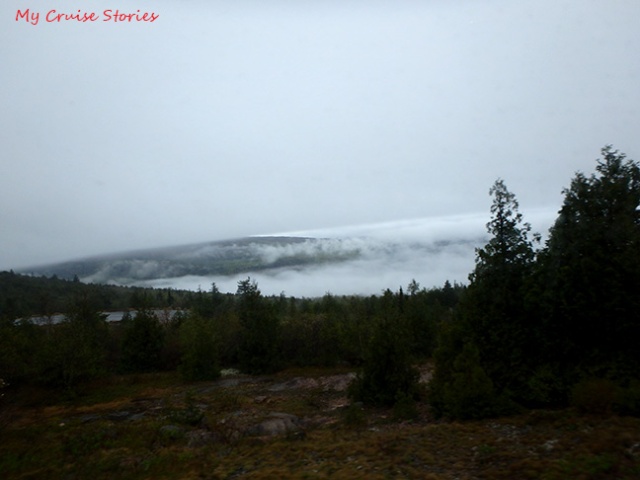 On the way back the sky cleared a bit and we saw a few peek-a-boo views of the sea. A deer wandered along the roadside unconcerned with the bus passing by. Back in town the driver gave people the option of getting off 0n the far side town and walking back through the shopping area or riding the bus all the way to the dock. We opted to get out, as did quite a few other people. We wandered into a few shops on the way back and found a path leading to a great view of the ship at anchor.