Posted on July 29, 2016 by LBcruiseshipblogger

Sailing into Puerto Vallarta, we had an excellent view from the Constellation Lounge on Celebrity Infinity. From a distance we could see Carnival Miracle already docked there. The other side of the little inlet across from the other ship looked just big enough to hold a cruise ship. The ship headed bow to the dock and when it looked just feet away began to spin the back end around so it would end up docked facing outward rather than having to back out when time came to leave.

one of the alcoves in Our Lady of Guadalupe church

As the ship turned we could see a little channel with a bunch of small boats docked on one side. In between a few ships moored to buoys the bow of a newly sunken boat poked out of the water. What we could see of this boat looked pristine white so it could not have been partially submerged for long. Meanwhile the Infinity’s bow narrowly cleared a couple boats that looked like they probably belonged to the navy at a dock next to the cruise pier. The ship completed its turn and slipped into position at the dock seemingly with the ease of a child turning a toy ship around, a testament to our captain who had completed a similar spin at the beginning of our voyage in the crowded waters at San Francisco where numerous small boats seemed determined to cross the pathway of the ship as it attempted to move.

terrace at a jungle restaurant

We got off the ship without any definite plans, but passed on the offers of tours of the area for $25 each. We had not yet gotten out of the parking lot before we were offered a 1-hour tour for $10.

Malecon beachside walkway through the touristy area of town

Unlike the $10 private boat tour in Cabo, this one headed back toward the ship first to pick up more people the driver said he had waiting. As soon as they got in it suddenly became a 3-hour tour for $20. For $10 he said he could let us off in old town where we could catch a cab back to the ship for $3 each, but we decided to stay on and do the full tour. 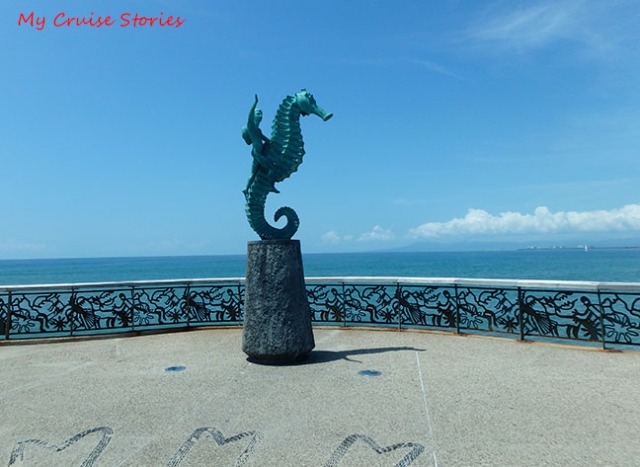 sculpture on the Malecon

The driver/guide was quite interesting. He talked about how though Puerto Vallarta does have an ever-increasing population of American and Canadian retirees, it is still mainly the familias, by which he meant families of Mexicans who have lived in the area for generations. He said Puerto Vallarta is safe for tourists because the families want their town to stay safe and will report anything bad to the authorities immediately, not giving the drug cartels any chance to gain a foothold in the area. Tourism provides jobs and a good income for a lot of locals and many of them have very nice homes. In the surrounding area people still fish and farm as they have for generations. The homes in the little fishing village we drove through did not look nearly as nice as the ones in Puerto Vallarta.

Church with a crown

We arrived in old town, and he let everyone out to see the Cathedral of Our Lady of Guadalupe. This cathedral uniquely has a crown on top, for to be a queen one needs a crown. The cathedral, he said, marks the line that divides the touristy area from the old-town area where locals shop, eat, and hang out. For genuine Mexican food and mariachi bands our guide recommended visiting the local’s area.

Inside Our Lady of Guadalupe cathedral

Though the cathedral has a sign saying you can’t go inside wearing shorts, our guide said the locals really don’t mind so long as people are quiet and men take off their hats as a sign of respect. We went just far enough inside the door to take some photos of the inside and took some of the outside while walking the block down to the Malecon to meet our van. The Malecon is a beachside walkway for tourists. Besides the ocean views it has different sculptures at each block and plenty of nearby shops.

Back in the van we drove out of town and stopped for a nice view of the sea from the balcony of a restaurant where people could use the facilities or buy a refreshing drink. Pretty much everywhere we stopped had something people could buy. Whether these places belong to friends or family of the driver, or perhaps sponsor van tours to bring in customers I don’t know, but would guess there must be some sort of connection there.

The next stop had a view of a couple either very large rocks or very small islands just offshore, each with a sea cave running completely through it. The guide said it was a good snorkeling place, but no snorkel boats or people were there at that time. There was however a little open air market under a large canvas roof right by where we parked where people had t-shirts and jewelry and things for sale.

resort on the beach

One roadside stop had just a bit of sidewalk next to the parking area with a view of the sea. It overlooked a beachside hotel, but for once had nothing for sale there. The Sierra Madre  Mountains ring Banderas Bay like a horseshoe, protecting Puerta Vallarta and the surrounding areas from hurricanes. These mountains gather the moisture from the summer rains that keeps the tropical forests green year round. The rainy season lasts through September, but it was sunny during our visit. The rains come mainly at night our guide said, and sure enough as the ship set out to sea that evening we had rain and lightning. 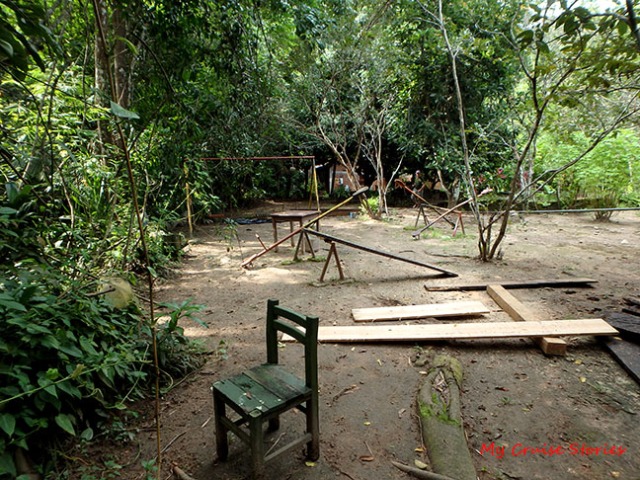 playground at the jungle restaurant

Next the guide said he would take us into the rainforest. We left the cobblestone paving in some places for gravel roads. Bright orange flowers lined much of the roadside. We parked in a gravel lot next to banana and avocado trees.

rope swing in the jungle

A forest path brought us to an old playground and then a river with a massive rope swing and a number of sandbags which the guide said people use to make a pool in the river on Sundays. A stone stairway led up to quite a nice open air restaurant in the jungle with little roofed areas with a few tables each on different terraces leading up to the main restaurant area.

guy at the tequila place explains how they make it

Next stop we learned how Tequila is made. The blue agave plants they use take 7 years for the root resembling a large pineapple to mature. They first cook the agave roots and then distill the liquid they obtain three times. They had a clear tequila that came straight from the distillery and amber-colored tequila aged in barrels for different amounts of time. The longer the aging period the smoother drinking tequila they obtain. A few people tried the offered samples and the guy who worked there had some along with them saying how much he loved his job as he got to taste the samples with every tour. 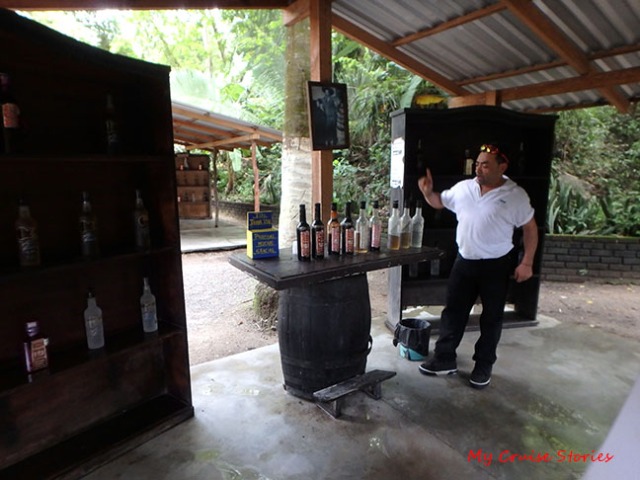 The last stop was near a flea market and other shops in the old town area. By this time our 3-hour tour had grown to about 5 hours, but the price stayed at $20 each. The rest of the people in the van wanted to stay and look around the shops or have a drink. We were not interested in shopping for souvenirs or trinkets or drinking. The first formal night was coming soon and my husband had forgotten to pack a dress shirt and wanted to make sure he’d have time to buy one so we took a cab to the shops across the street from the ship.

front entrance to the jungle restaurant

MyCruiseStories blog tells stories about adventures in cruising on ships big and small. Things to do onboard and in port. Anything connected to cruising. Also food, travel, recipes, towel animals, and the occasional random blog.
View all posts by LBcruiseshipblogger →
This entry was posted in Celebrity, Infinity, Mexico, Port Cities, Ports of Call and tagged cruise, Mexico, Puerto Vallarta, Puerto Vallarta cruise port, things to do to in port on your own, travel, van tours. Bookmark the permalink.

6 Responses to The Ever-Growing Van Tour in Puerto Vallarta