Back to Belize for More Cave Tubing

Posted on July 22, 2016 by LBcruiseshipblogger

In the past I have always heard that if you don’t book something in Belize, then there is nothing there to do. On our first visit there were just a few stores at the port. People who had done more exploring beyond the port said they didn’t find much. We had only gone just outside the port to meet our bus for a cave tubing adventure. Several years later we came back to Belize and found that has changed over time.

We had a snorkel excursion booked, but when we went the meeting place Carnival Splendor listed on our ticket we found out it got canceled. Some other people we met on the ship had arranged an adventure with cave-tubing.com, the same outfit my research last time led me to. John missed out last time, opting for a fishing excursion he didn’t enjoy and I liked the cave tubing so much I was happy to go again so we went looking for our friends in hopes they hadn’t left the ship yet. We caught up with them just before they got off the ship so they let us join in with them. 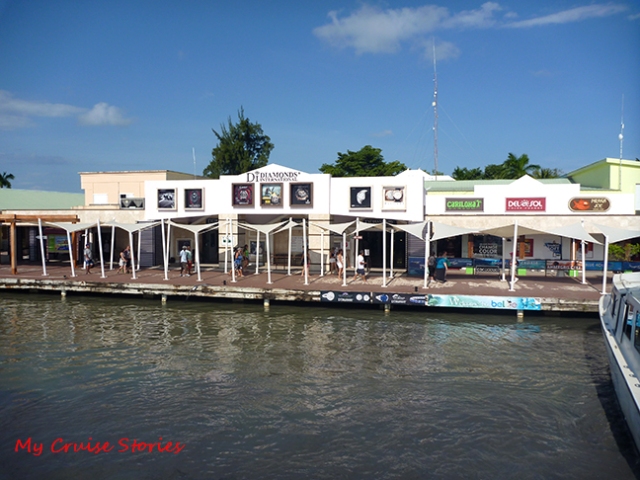 Shops at the Tender Port in Belize

As the tender docked, I didn’t recognize anything on the shore at all. It looked like a completely different port. Where once just a string of small local souvenir stores stood, they have now added many of the usual cruise port shops. There’s also food available and at least one bar right in the tender port area. As we walked up the dock we saw something else we hadn’t seen on the last visit – people with signs for random tours at the pier, including one for snorkeling. We did not stop to see how much they cost.

rock formation inside the cave

We followed our friends through the pier and out the terminal where she had arranged to meet with the cave-tubing.com people. They were waiting just outside the exit from the terminal. There were also a few locals selling things like handmade costume jewelry and wood carvings. The bus showed up shortly. On the way to the park we went first through the rich area of town with fancy homes for people like doctors, lawyers, and “street pharmacists,” and on through the poorer area where many locals live. Our guide mentioned the bridges donated by Canada and China.

The guide said the 2-lane road through the countryside that took us the 30-some miles to the park is the only highway that goes through a graveyard. It had tombs nearly to the edge of the road on both sides. On the way there they handed out little taster cups and gave anyone who wanted it a taste of their locally made cashew wine.

Building at the Park

Just before we reached the park the bus stopped to let off anyone who wanted to ride ATV’s through the jungle, which included the friends we came with, though we did not go to the ATV’s with them. After they got off the bus continued on to the Caves Branch Archaeological Reserve. They got the zipliners out first and on to the ziplines. Everyone else was given a chance to change clothes, use the restroom, or briefly look through the new shops that stood where once there were just a few small booths with locals selling things, though there were still some locals with their wares set up under a roofed area near the restrooms, which looked the same as before. We did the zip line on our first visit there, but this time went with the cave tubing only.

Hardhats were still available but not required, though we did see people from a different vender wearing some. Unlike last time when life jackets were optional, this time they said we all had to wear them. They also handed out head lamps, a light on straps to wear on your head so as to see things in the totally dark cave. On my last visit there we carried yellow tubes with us as we set out on the path to the cave, but this time blue tubes with backrests awaited us at the river near the mouth of the cave. 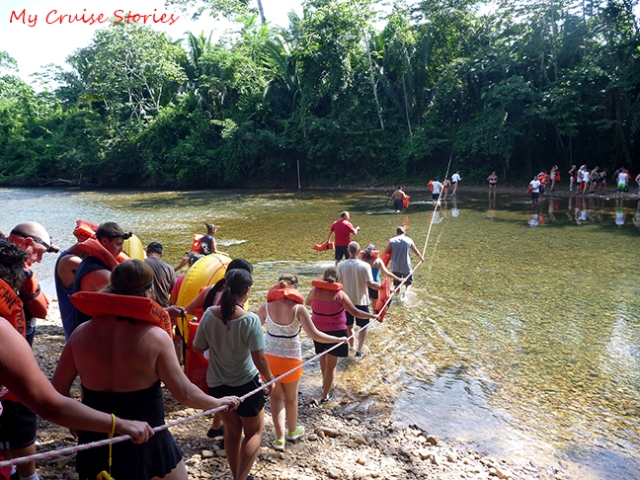 river crossing to get to the trail to the caves

Everyone comes and goes on the same bus whether they do one, two, or all three of the tours they offer (cave tubing, zip line, and ATV.) Our first time there the guides mentioned having their ways of keeping everyone busy whether they did one option or more. It turns out they have long and short paths to the cave entrance. Last time we took the short path, which has 3 river crossings. This time we took the long path as we had just one activity to do. The long path had just one river crossing at the start of the hike where a rope across the river gives people something to hold onto as they cross if they want to. The rope also has other uses.  It marks the end of the river float and the stairway to get out at the end of the tour and serves as something of marker after a rain – the caves close when the water rises higher than the rope.

The long path passed through a dry cave. It also had signs on some of the native fauna, such as mahogany and a cohune palm. The nuts of the cohune palm gave rise to the phrase big cohunas. Along the way the guides pointed out various trees that had medicinal uses for the bark or leaves. 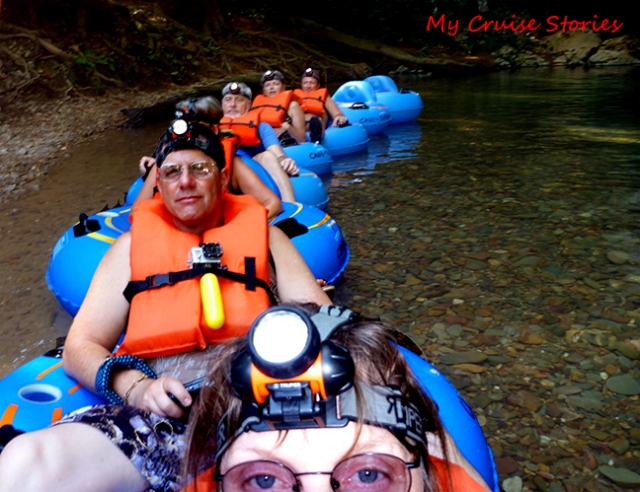 When we reached the river’s edge a large pile of tubes awaited us. We came with a group of 30 people our friend had organized, plus a few others on the bus not with our friend’s bunch. They gave people a chance to swim if they wanted while they got the tubes organized. Instead of tucking feet under the person on the tube ahead’s arms to hold a string of tubes together as we had last time, now they have the tubes lashed together with ropes. The people not with our large group set off first and the rest of us went through the cave together in strings of 8 tubes each. Our string had one guide the whole time and a second who helped her part of the way. While we all got set up on tubes the people who had done the ATV ride and also wanted to cave tube arrived from the short trail to join the group. 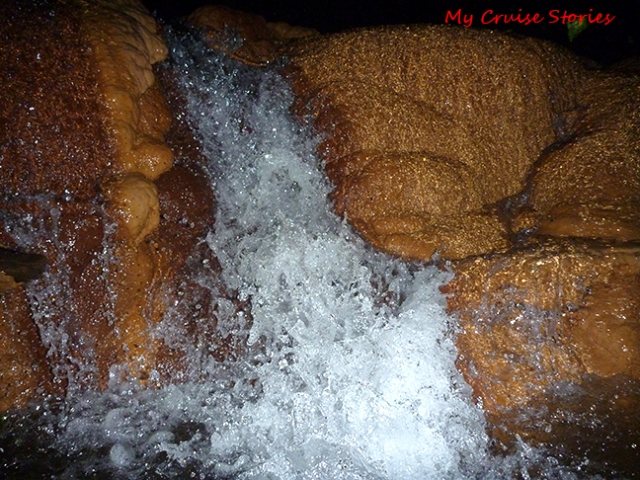 waterfall in the cave

On the way through the cave we saw a variety of formations and an area with bats on the ceiling. They took us into a chamber with a waterfall, which we did not see last time when we were on more of an express tour before ziplining. We went past the place where the outside comes in – light and greenery through a hole in the top of the cave, something the guide called a sinkhole and said was a sacred place to the Maya. 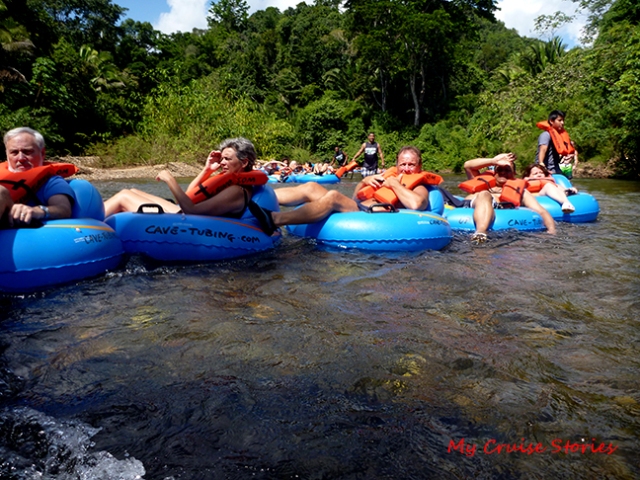 floating the river after the cave

The river flowed through the cave and back out into the sunshine. We floated on down the river to the starting/ending point, which makes it a nice long ride, unlike if we had to get out right after the cave like the ship’s tours do. Along the way throughout the downriver journey both in and out of the cave we sometimes heard the call of “butts up,” which means a rock or shallow spot that you need to raise your rear out of the water to avoid hitting.

Once everyone got out of the water we went back to the bus. It went a short distance back to the tiki hut where the ATV riders got out on the way to the cave. This time everyone got out for a chicken tamale lunch. They also had restrooms there, good for anyone who didn’t have time to use the ones at the park. 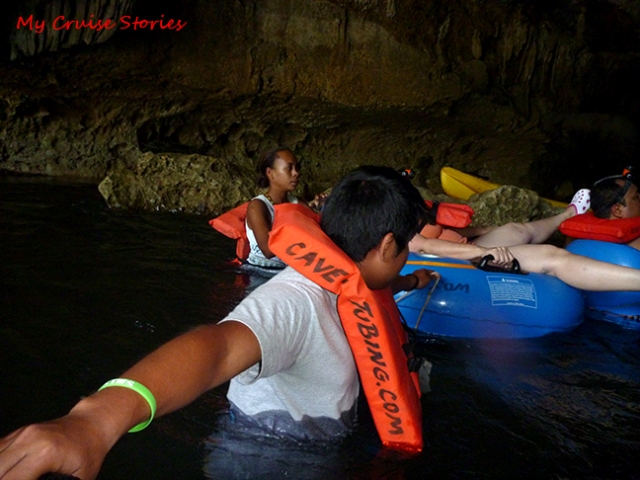 guides pulling the tubes through the cave

Cave tubing is lots of fun whether you have done it before or not. John was glad to get a chance to go since he had heard me talking about how much fun I’d had doing it for several years now. He enjoyed it too. It’s still one of my all-time favorite shore excursions and well worth doing again. Once again cave-tubing.com returned us to the pier in plenty of time to get back to the ship and enough to spare for anyone who wanted to shop a bit. It’s easy to book with them. Just go to their website and make arrangements if your ship has a port of call in Belize. They’ll meet you at the pier and there’s no worries about the money if for some reason your ship misses that port because you don’t pay until the bus ride back. Bring cash, with enough extra to tip the hard-working crew and to buy drinks, t-shirts, wine, or whatever at the lunch stop. They happily accept US dollars.

cave tubers in the cave

Using cave-tubing.com rather than booking through the ship saves you money, gives you a longer ride, and supports local Belzians who have years of experience in the cave. This company has been in business over 15 years and the owner and all employees are local to the area. They have an award of 5 star excellence from Trip Advisor based on reviews from people who have taken the tour. They understand cruise ship schedules and return you to the ship on time. The ship’s tour is done through a Jamaican company.

MyCruiseStories blog tells stories about adventures in cruising on ships big and small. Things to do onboard and in port. Anything connected to cruising. Also food, travel, recipes, towel animals, and the occasional random blog.
View all posts by LBcruiseshipblogger →
This entry was posted in Caribbean, Carnival, Ports of Call, Shore Excursions, Splendor and tagged Belize, Belize cruise port, cave, cave tubing, fun, photos, things to do, travel. Bookmark the permalink.

4 Responses to Back to Belize for More Cave Tubing