Posted on August 5, 2016 by LBcruiseshipblogger

­When cruising out of Valparaiso as we did on the P&O Arcadia, if you fly into Chile you land at Santiago. From there you need to find transportation for the 70 mile trip out to the coast. Cabs are pretty pricey for that distance as are the private cars for hire that are another option. The public bus is cheap, but stations may not be convenient to where you need to go so a cab ride to and from bus stations may still be a necessity. We stayed a couple nights at the Doubletree by Hilton Hotel in a nice area of Santiago before venturing to Valparaiso and found an additional option for the journey. Hotels in Santiago can set their guests up on day tours with tour operators in the area, which has more than one company providing tours. Options include city tours, winery tours, a visit to the Andes Mountains, or a day trip to Valparaiso, which would likely also include a tour of nearby Viña del Mar. 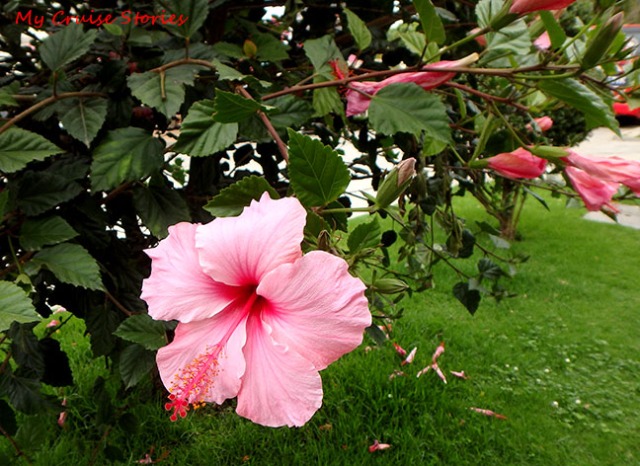 Most people finish the tour with a return trip to Santiago, but if you want to stay in Valparasio they can put your luggage in the luggage area under the bus and drop you near your hotel at the end of the tour. Some other people on our tour (who were also on our cruise) had a hotel near the square where the bus made its final stop. The tour guide walked them to their hotel while the rest of the people had free time to wander the area. Ours was not as close to a tour stop, but the road they took when they were ready to head out of town went right by it so they made a brief stop to let us out by our hotel. That worked out quite well for us. We saved money on transportation since the tour was cheaper than a cab, and got the tour as a bonus over just a ride there.

On the way to the coast our guide gave us all sorts of information about Chile, the most interesting of which was that it has the most earthquakes and volcanoes of anywhere in the world. The Pacific ring of fire passes through a lot of countries on both ends of the ocean and while all the world’s tectonic plates shift some, this is the most active area. It creates volcanoes as well as causing earthquakes which is why a considerable amount of the earth’s volcanic and earthquake activity take place in Pacific coastal countries. He also said Chile has lots of tourists from Brazil and Japan so in addition to their native Spanish, people who speak Portuguese (as they do in Brazil), Japanese, or English are in demand in Chile’s tourist industry. 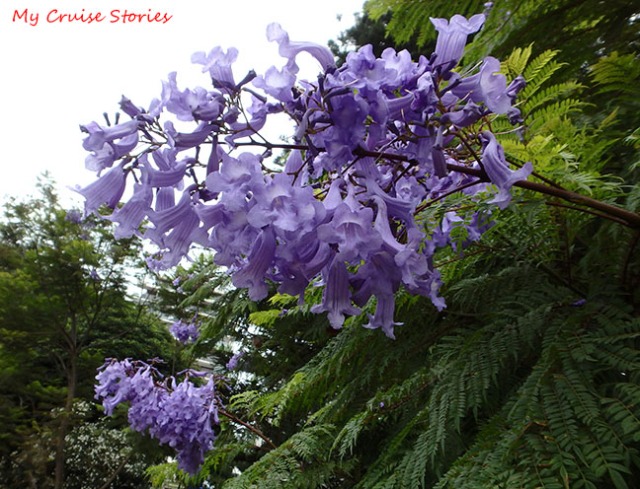 flower on a tree near the casino

The bus passed through a tunnel into a valley and then later through another tunnel into the next valley. Another feature of a lot of Pacific coastal areas like Chile is having a coastal mountain range and a taller inland range so we had to pass through (or under) the coastal range before reaching the sea. Each valley is in a lower altitude as you get closer to the sea, and each has its own weather patterns. Casa Blanca Valley is the coldest and a place with numerous wineries producing white wines. After leaving sunny Santiago we went through fog in that valley. 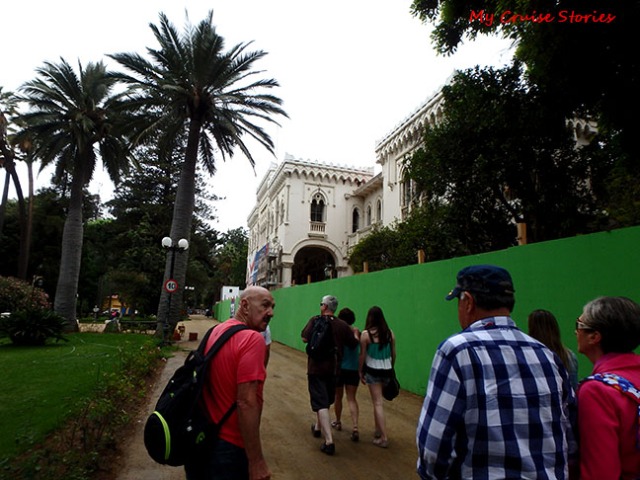 At the coast we first went to Viña del Mar. There we walked through a park and then stopped to take photos at the former home of a famous writer we’d never heard of called Pablo Neruda, probably now long dead. A train runs between Viña del Mar and Valparaiso so people staying at either city have easy access to the other. The train has a stop near the port building where you go to check in before boarding a cruise ship. The two towns are close enough you really can’t tell where the borderline of one ends and the other begins, but it is a long walk from the tourist areas of one to the other. There is a seaside pathway so those who want to walk can. It would be quite a scenic journey. 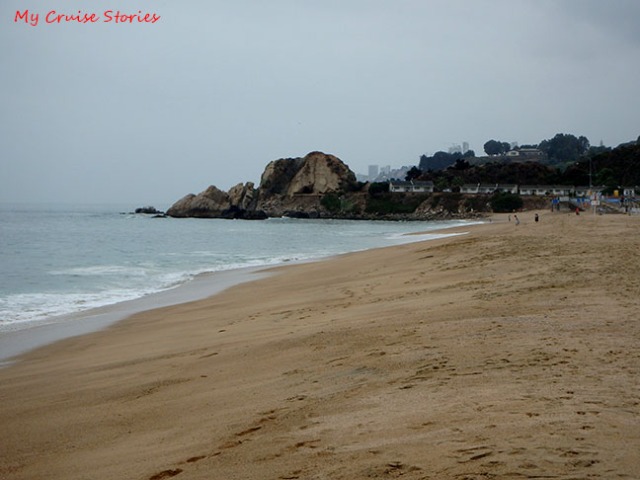 The bus stopped at a beach. Nobody was allowed in the water due to excessively high waves that day, but at that stop we could walk on the beach and take photos. Though some waves towered above the height of anyone standing near the water, in photos it just looked like people at the beach and not impressive at all.

In the main part of town they had everything near the water closed off including an entire park between the sidewalk and the beach. Nobody could even get close enough to see the water there. Rental riding toys along the sidewalk next to the park probably would stay in the park when it is open. The park had trails where kids could ride them instead of having to maneuver bikes and pedal cars through sidewalk crowds as they had to that day. Some kids painted pictures on little stands along the sidewalk, something we saw again at a park in Valparaiso so it may be a popular pastime there.

The tour guide gave us a couple lunch options, an expensive seafood restaurant in an old castle or a nearly as expensive buffet at a casino. We got out near the castle, the farthest stop from where the bus would park in the casino lot. We skipped the restaurant and went for a photo safari instead. That area had a sea view sidewalk and lots of rocks for the waves to splash impressively over.

Waves splashing over the rocks. The castle at the right edge of the photo was the lunch stop.

Of course none of the biggest waves ever came when we had cameras out no matter how long we stood there waiting for them. The really big ones came either before we got close enough or after we gave up waiting. The castle with the restaurant was across the street from another castle by the sea called Castillo Wulff, which had a sign on a locked gate saying it was closed for renovations so no tours available.

We did get some shots of water splashing over rocks and running through a sea arch in the castle before walking to the bus meeting point at the casino. It was a nice walk back to the bus down the seaside walkway. One building resembled a boat. The path turned inland alongside an inlet of some sort and over a bridge. Near the casino we saw a horse and buggy ride staging area where some of the waiting horses munched happily away at hay or whatever was inside the feed bags they wore on their heads. 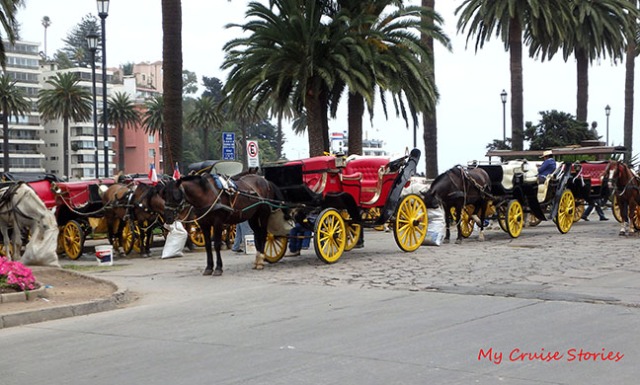 We saw some other people from our tour group walking down the sidewalk who had also bypassed the expensive lunches. Rather than skipping lunch entirely as we did, they had gone across the street where they could find a cheap lunch at fast food places. On the sidewalk near the casino we also ran across some beggars and a couple ladies trying to hand out sprigs of rosemary.

tree near the flower clock

We were forewarned about rosemary ladies before a previous cruise from Spain and had come across them in Malaga so we knew better than to let them within reach of us. Rosemary ladies are known to either pick your pockets if you let them close enough or demand money if you take the rosemary they offer. At least that’s what they do in Spain so we didn’t take any chances and kept our distance from them in Chile as well.

We had a quick photo stop at a street corner near a garden with flowers planted into a giant working clock called Reloj de Flores before heading off to Valparaiso for the rest of the tour.

Things to do in Viña del Mar

Beaches are one of Viña del Mar’s biggest attractions with tourists and surfers flocking there each summer. Also popular is the Quinta Vergara Amphitheater for summer concerts and an international song festival. The casino is also an attraction, not only for the games, but for the building itself as one of the oldest casinos in South America having been built in the 1930’s. The city also has parks, museums, historic buildings, and sand dunes. One of their museums has one of Easter Island’s moai statues out front, something I wish I had known while we were there because I would have liked to see that.

MyCruiseStories blog tells stories about adventures in cruising on ships big and small. Things to do onboard and in port. Anything connected to cruising. Also food, travel, recipes, towel animals, and the occasional random blog.
View all posts by LBcruiseshipblogger →
This entry was posted in Arcadia, Day Trips, P&O, Port City Side Trips and tagged beach, bus tour, castle, Chile, photos, Santiago, things to do in Santiago, things to do in Vina del Mar, tours, travel, Vina del Mar. Bookmark the permalink.