In Search Of Tasmanian Devils

Posted on September 11, 2015 by LBcruiseshipblogger 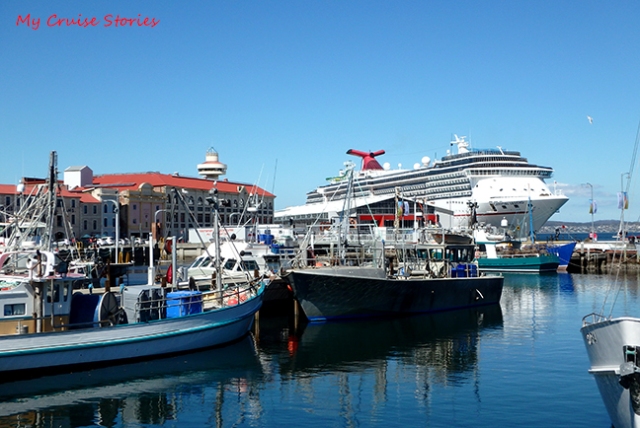 The mere mention of Tasmania conjures up images of Tasmanian Devils, the one thing most associated with that Australian island.  Both my Australian daughter Sheri and I wanted to see Tasmanian Devils while in Tasmania on our cruise on the Carnival Legend.  You would think that should be as easy as spotting alligators in Florida swampland, but Sheri said there aren’t that many left in the wild now.  80% of the wild Tasmanian devil population has died from an infectious cancer, putting them on the endangered species list. The way to make sure we could find some was a visit to the Bonorong Wildlife Sanctuary on our port stop in Hobart. 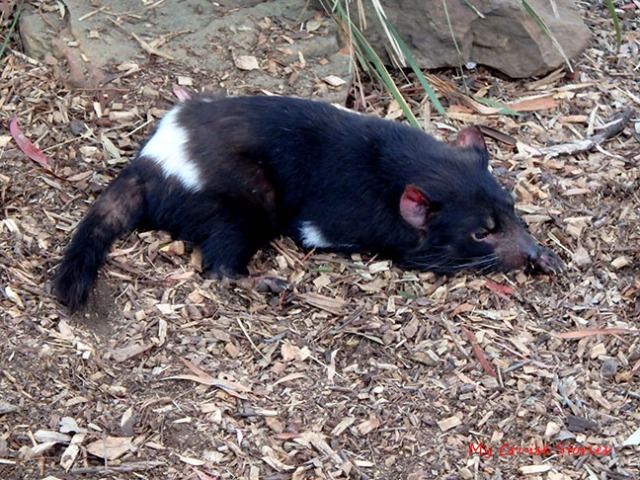 The Wildlife Sanctuary is far from the cruise dock and Hobart does not have the sort of public transportation found in Sydney so the best way to get there was through a shore excursion.  You can book a visit to the wildlife center on the ship or through an outside source.  The excursion from the ship cost significantly less then the independent one Sheri found, although that one did include the Cadbury chocolate factory where the ship’s excursion did not.  While the chocolate factory would have been nice to see (especially if they had free samples) we opted to watch the budget and go with the ship’s tour. 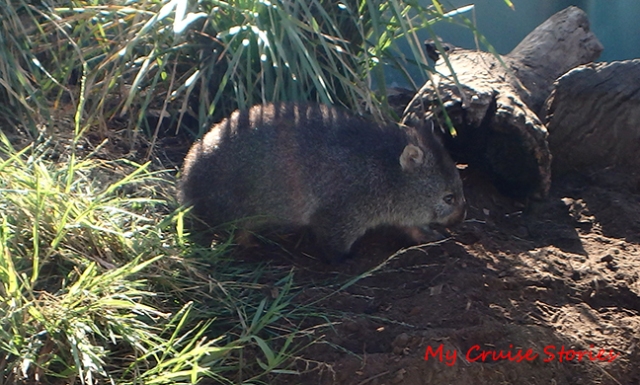 The wildlife refuge is not a zoo, but rather a rescue facility for orphaned and injured animals. They started our tour with baby wombats drinking milk from bottles. Most of the wombats come as infants who safely in the protection of their mother’s pouch survived the car that killed their mother. 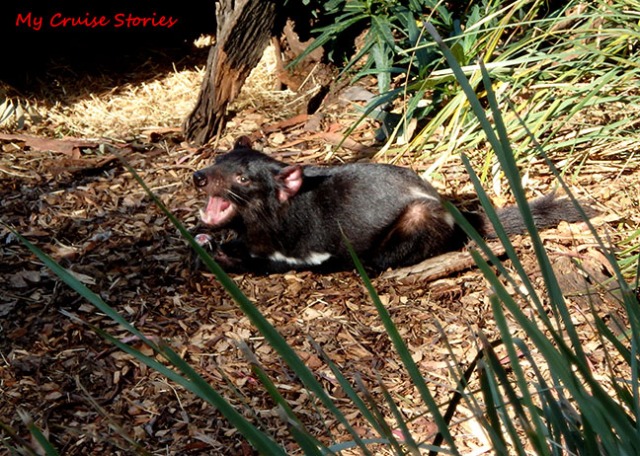 Tasmania has the highest roadkill rate of wild animals in the world. All these dead things are a feast for the Tasmanian devils, who then put themselves in danger while they stand in the road eating roadkill.  Their communal eating habits also contribute to spreading the cancer.  They scream loudly with the eerie screech that gave the species its name during feeding.  While fights over food may not result in serious injury, any bite or scratch could transmit disease. 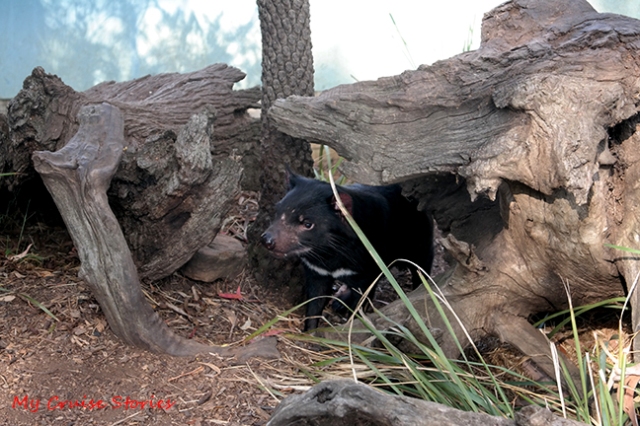 Tasmanian Devils may look cuddly, but would likely bite if anyone tried to cuddle them

The refuge releases most of their recovered animals into the wild, but they have a disease free population of Tasmanian devils kept for breeding to try and help the species survive as no cure has yet been found for the cancer decimating wild Tasmanian devils. 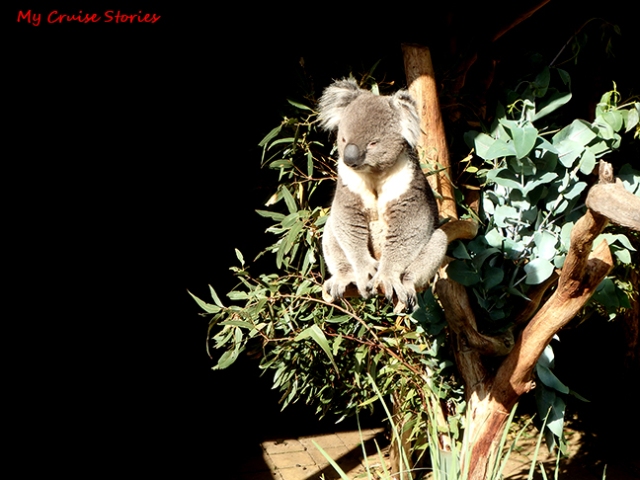 The cute cuddly baby wombats are tame and sweet. Our tour guide said at about age 2 these distant cousins of the koala turn mean, making them easy to return to the wild. Wombats live on the ground and use the hard plating on their backsides to defend themselves should something try to invade their lair. The koala’s hard back plate has a v shape to help it stay in the crook of a tree where it spends up to 20 hours a day sleeping. The name koala means no drink as these slow moving animals would be in grave danger if they came down from the trees to find water. They get the moisture they need from their diet of young eucalyptus leaves. 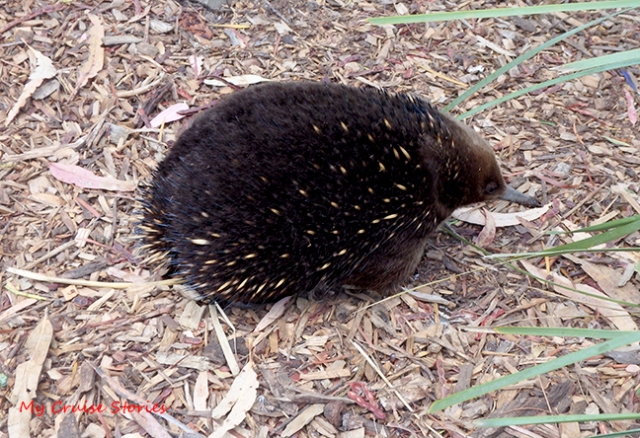 One pen held an echidna who would never return to the wild as she lost a leg in the dog attack that landed her in the wildlife refuge. 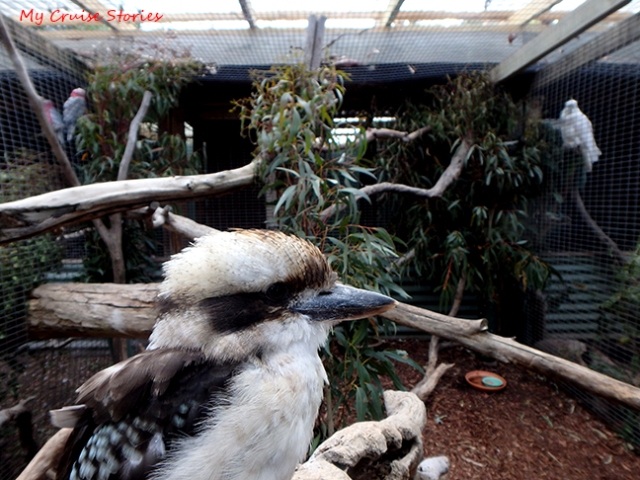 Other enclosures around the wildlife sanctuary held a variety of birds and some lizards. The largest enclosure held a number of kangaroos and wallabies. Upon arrival at the park each person received a small bag of kangaroo food. Once the guide finished talking about other animals people could enter the kangaroo enclosure on their own.  The big red kangaroos of the Australian outback don’t live in Tasmania, but the smaller grey kangaroos and wallabies do. 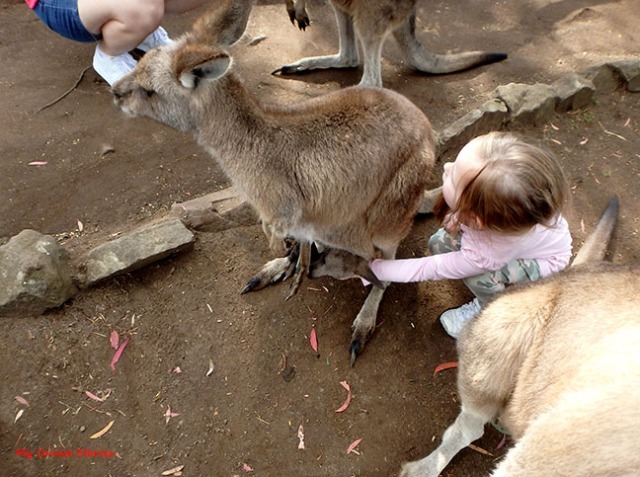 Hannah coaxing a joey to peek out of the pouch

The kangaroos knew what the little paper bags meant and a large one quickly stole the whole bag from 5-year-old Hannah, who preferred to try and feed the joeys in the pouches over trying to feed kangaroos who were bigger than her. While pictures always show a baby with just the head hanging out of the pouch, these joeys seemed to prefer sticking tails or limbs out instead, making the mother look as if she had extra limbs or a tail hanging out in odd places. Hannah had good luck coaxing the joeys’ heads out, though the mothers usually ate the food. Eventually another kangaroo came along and stole the bag of food her grandpa gave her after the big kangaroo stole her first bag. 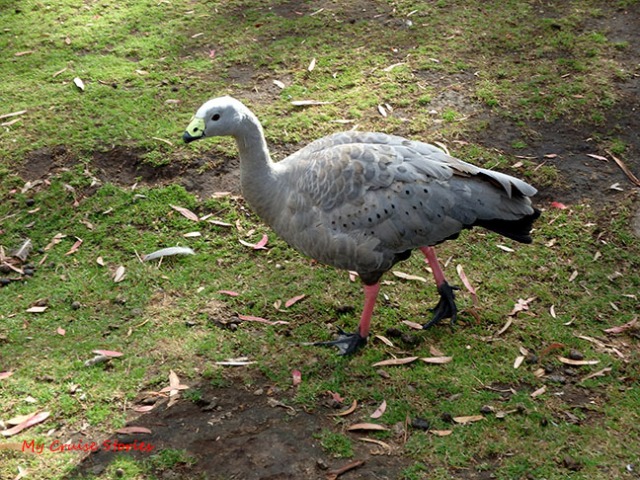 wild goose knows where to get a free meal

getting molested by a kangaroo was NOT on my bucket list

Some pretty wild geese flew in to join the kangaroos in eating the bounty provided by a group of cruise ship passengers.  Wild birds know where to find an easy meal.

While none of these kangaroos made any attempt to hurt anyone, some were definitely more aggressive than others about trying to get the food. One of the bigger ones decided to try and get my whole bag. It’s not every day you get hugged by a kangaroo. This one got up close and perhaps a bit too personal. 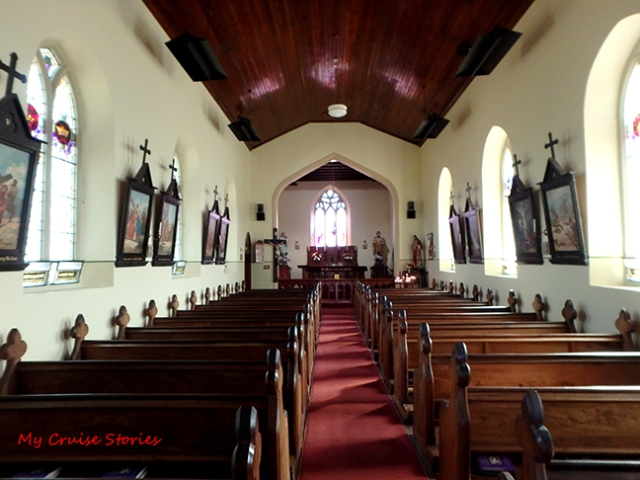 inside the oldest church in Tasmania

After the wildlife center our tour included a few stops at viewpoints for photo ops of the oldest catholic church in Tasmania (and I think maybe they said all of Australia), a couple bridges, and the ship. 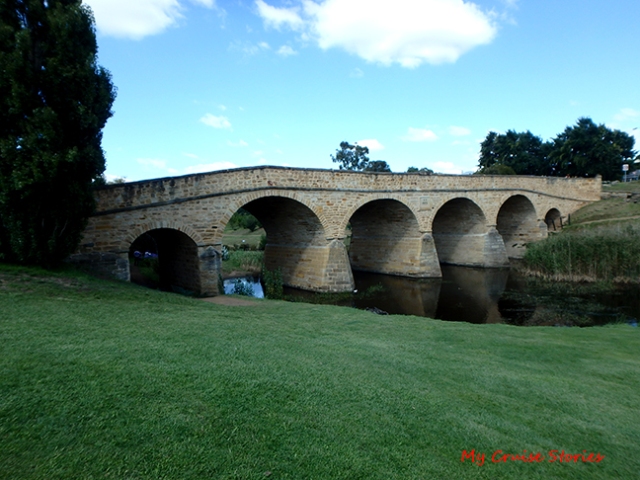 On a drive through the countryside we learned that Tasmania grows most of the world’s supply of legal opium poppies, used by pharmaceutical companies to make painkillers. While the food grown in Tasmania is all genetic modification free, these are GM poppies and lethal in their natural form. Every so often someone dies after stealing some poppies from a field. Other farm products of the area include vineyards, dairy, olives, and Tasmania’s own leatherwood honey, which has a very strong honey taste appreciated by true honey aficionados.  We always learn random interesting things when we take ship’s excursions. 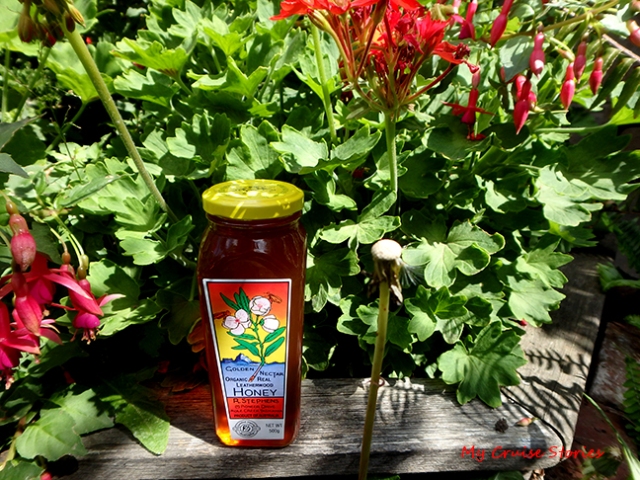 We spent a bit of time in historic Richmond before returning to the ship.  The small town had some tourist shops and a park near where the bus stopped.  Back in Hobart we had a bit of time to wander about the docks before the all aboard time.

Hopefully they find a cure for the Tasmanian devils soon.

7 Responses to In Search Of Tasmanian Devils