Posted on August 3, 2014 by LBcruiseshipblogger 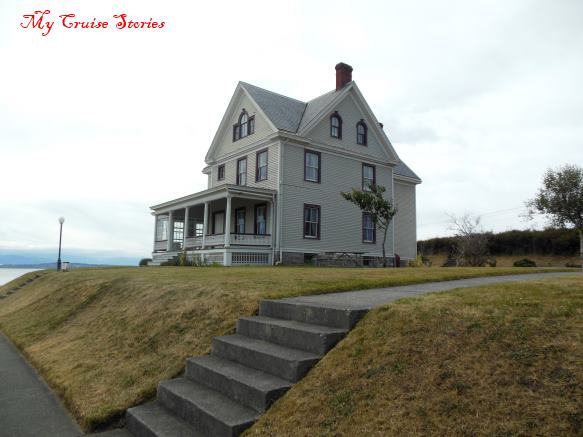 In the not-so-distant past, most civilizations situated anywhere near large bodies of water viewed their biggest threats as coming from the sea.  The invention of the airplane made many large forts built in formerly strategic locations around the world obsolete.  Now old forts often exist as monuments to history.  Behind their sometimes crumbling walls modern day tourists get a glimpse of life in a former era.

Lighthouse at Fort Casey State Park.  It no longer has a light in the tower, but people can go up there.

While the Pacific Northwest region of the USA came late as far as settlers of European descent goes, it still had population and resources enough to deem need of protection from invaders by sea before airborne threats made such forts unnecessary – but only just before.  Until the establishment of a military base in Bremerton in 1891, the Puget Sound area of western Washington was considered too remote to need much protection, though government officials discussed the possibility decades before. 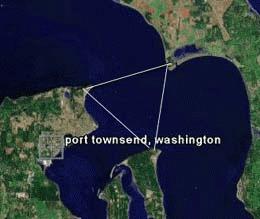 map of the 3 forts making up the triangle of fire courtesy of HistoryLink.org

The late 1890’s brought about the building of three forts dubbed the Triangle of Fire placed strategically at the entrance to Admiralty Inlet to prevent enemy ships from entering Puget Sound.  All three were armed with disappearing guns, so known because of the ability to withdraw them out of sight for reloading, protecting both the guns and the soldiers.  None of these guns ever fired at enemy ships from any of the three forts, nor did any of the other large guns based there as no enemy ever approached by sea to test their powers of defense in the short time between completion of the forts and the entrance of airplanes into the battles of World War 1.

First of the three came Fort Flagler on Marrowstone Island, completed in 1899, but occupied prior to completion as the temporary headquarters of the harbor defense command of Puget Sound.  This fort never saw any actual battles, but was used for military training during World Wars 1 and 2 and the Korean War.  The fort was declared surplus and decommissioned in the 1950’s and became a state park in the 1960’s.  Touring this fort is one of the options offered on Un-Cruise Adventures Washington coastal cruises. 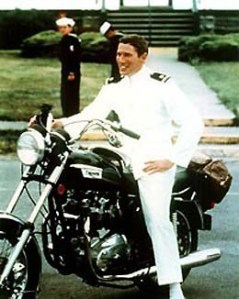 Richard Gere in a scene from An Officer and a Gentleman, photo courtesy of historylink.org

At Fort Worden near Port Townsend it took 200 men nearly 3 years to complete the excavation and build the massive concrete gun batteries.  The gun mounts were finished in 1901 and the fort finally activated in 1902.  It served as a training ground for soldiers in World War 1 and remained as headquarters for Harbor Defense during World War 2.  After military decommission in the 1950’s it was used as a center for diagnoses and treatment of troubled youths until 1971 when the center closed.  It became a state park in 1973.  In 1981 the fort temporarily transformed into a movie set.  It depicted a naval aviation officer candidate school for the movie An Officer and a Gentleman which filmed there.  Many locals had bit parts as extras in the movie, which also gave the area’s economy a much-needed boost.

Fort Casey on Whidbey Island completed the triangle of fire.   It started with a small temporary garrison in 1901.  The permanent garrison arrived in 1902, living in tents until their barracks got built.  Some of the fort’s buildings weren’t finished until 1903 – the same year the first of its big guns were activated and ready for testing.  The fort was used for training in World War 1 and reactivated for training during World War 2, having been put into caretaker status and used to train reserves and national guard in between the two.  Following World War 2, Fort Casey sat abandoned and neglected for a time until official deactivation in 1953.

One of the guns on display at Fort Casey

Though the big guns never saw battle at the three forts, they did get fired for testing and training.  All were eventually dismantled.  Some shipped to Europe to do battle there during World War 1.  Others got dismantled after the war or eventually melted down to make other things.  During World War 2 some of the batteries held anti-aircraft guns.  The state acquired portions of Fort Casey including the lighthouse and gun batteries in three separate purchases between 1955 and1988 to make a state park.  During the 1960’s the state obtained a couple 10-inch diameter disappearing guns and a couple of the 3-inch diameter guns like the fort once had from a fort in the Philippines, which are now on display at Fort Casey State Park.

Duplex at Fort Casey Inn with comfy chairs on the porch.

Seattle Pacific University bought a large parcel of Fort Casey including the barracks,  most of the administrative buildings, and the high ranked officer’s housing.  This is now the university’s Camp Casey Conference Center.  Later they acquired a row of lower ranking officer’s homes, which are available for rental to the public as Fort Casey Inn.  (These houses already operated as an inn before the university bought them and continue in that use.)

The inn consists of four duplexes and one freestanding house where the doctor once lived on the base.  Antique furniture contributes to their charm.  The living rooms have what looks like an old fashioned wood stove, but with the flick of a switch they light up with a cozy gas fire.  They must have previously had actual wood stoves in the not-too-distant past because the one we stayed in had a fire poker mark burned into the otherwise in good condition carpet next to the stove.  Large porches with comfortable chairs make a pleasant place to sit and enjoy the view.  Odds are one of the many resident deer will amble by if you sit there for long.  We also watched a swarm of eagles and hawks hunt in a nearby field while a farmer’s hay making activities brought a feast of small critters to the surface.  Meanwhile a pair of barn swallows tried to make a nest on the porchlight. 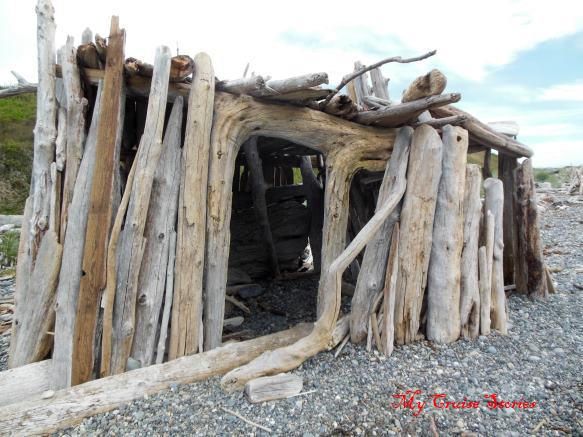 From the inn guests can hike to the nearby state park to see the old gun batteries, go hiking, or spend time on the beach.  People have a habit of building large driftwood structures along the beach there.  Some look like they took a lot of time and effort to build. 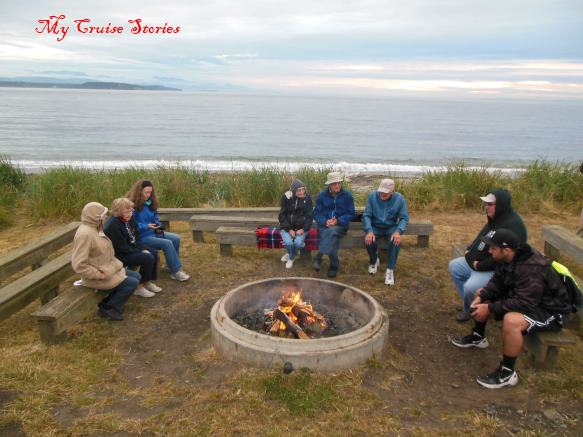 I recently spent some time in Fort Casey at a family reunion over the 4th of July weekend. Taking a stroll down the beach with my sister one day we found quite an elaborate driftwood house near the state park.  While no fireworks are allowed at Camp Casey, we saw several displays across the lake from the yard in front of the Fort Casey Inn on the 4th of July.

Deer ventured into the vicinity quite often.  Upon my arrival there I saw a doe with a fawn still young enough to have spots.  Fairly brave deer, they seemed quite unaffected when my phone rang and a car drove by at the same time.  A group of bicyclists came by a bit later.  The initial emergence of bicycles with very brightly dressed riders suddenly shooting out from behind the trees spooked the deer a bit, but it was their overwhelmingly loud voices proclaiming the deer sighting to each other that sent the deer bounding off to the forest as fast as they could go.

My aunt set up a word game one day.  One of those how many words can you find in a given word games.  My cousin’s son (the youngest one there and obviously sharpest of mind) won by a landslide with over 60 words. I came in second with 52, though my mother was just one word behind at 51.  I now have a stained glass bird hanging in my kitchen window, my prize for the game and a reminder forever of a fun weekend with family.  It’s not quite the front door with stained glass window I tried to find when we first moved to our current house, but at least I have a bit of stained glass.

With all this removing of cousins, you wouldn’t think there would be anybody left in the family, but they’re all still here.  Well all except my kids and my sister’s kids who removed themselves to far off states or in my daughter’s case a far off country.

We did not take a cruise ship to Fort Casey Inn (unless you count the state ferry.)  We did see one go by though and one of the relatives pulled out his trusty smart phone and used a shipfinder app to see just which ship it was.  (One of Royal Caribbean’s.)  Apparently there’s an app for everything.