Posted on January 31, 2013 by LBcruiseshipblogger

A different kind of cruising – on land!  My Cruise Stories is mainly about cruising on the sea, and will remain that way, but motorhomes are sometimes referred to as land yachts (and some of them deservingly so.)  In fact there’s even a motorhome rental company called Cruise America.

I haven’t got plans yet for my next sea cruise, but there is a vague resemblance of a plan in the works for a land cruise halfway across the country next fall.  My daughter and her kids plan to come over from Australia and we’ll all take a road trip to Minnesota for my niece’s wedding.  We’re bound to see a bit of Americana along the way, perhaps even some majorly interesting places like Yellowstone (which is actually the caldera of a gigantic volcano) or Mount Rushmore.  With two small kids in tow there’s bound to be some interesting blog-worthy moments. 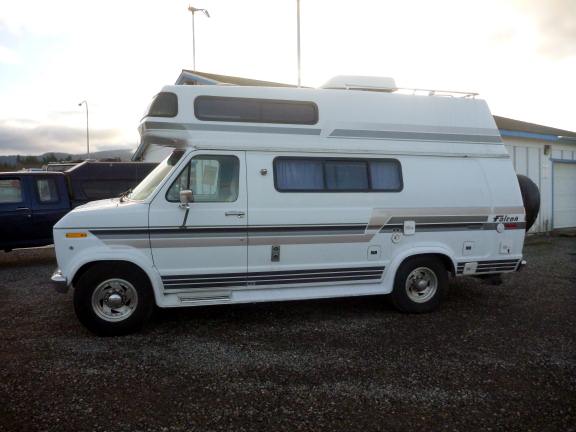 So why am I writing about this now?  Because we just took a major step toward this and probably many other land cruises to come.  I bought a vamper.  What, you may ask, is a vamper?  After all even the salesman on the RV lot gave us a puzzled look when we said we wanted to see that vamper over in the corner.  That’s our word for a camper van.  We’ve called them that for years, long before we ever thought of owning one.  (We did own a small motorhome once, but it blew up due to a propane leak.)  Hopefully I never decide to buy an Airstream……we’ve always called those sausages, ever since I was a little kid.

So it’s not exactly new and somebody got a lot of use out of it, it’s not like we have the $50,000 or more it takes to buy a new one.  Not only was the layout on this one about the best we’ve ever seen in a vamper, but the price was far less than I thought we’d ever find one for. 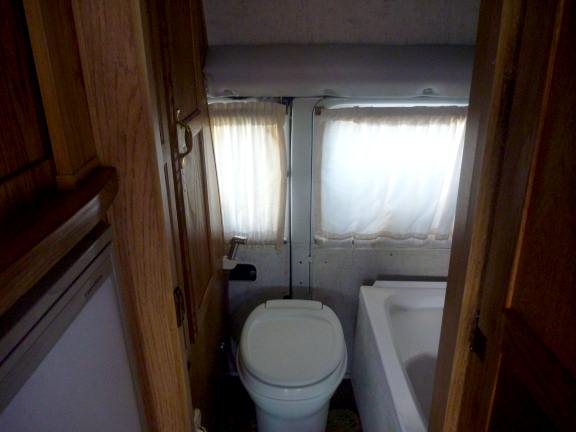 This vamper has an actual bathroom.  Not a slide-out closet or a porta-potty, but a real flush toilet and even a tiny bathtub.  All in a room where an adult can enter and shut the door while other people can still move about the van.  Granted the tub is probably not large enough for an adult to sit in, just stand and take a shower, but when traveling cross-country with two small kids it will surely come in handy!

OK so I have some cleaning to do

It also has the most awesome couch that converts to a bed by rolling the back of it over to the other side of the seat on some sort of track that flips it over and lays it down on the other side with little legs that pull out and support it.

I’ll have a bit of work to do making some cushions for the top bed as it hasn’t got any, and cleaning things up a bit, but that’s a small price to pay for the small price we paid.

the top bunk slides out into a full sized bed

OK so it might be a stretch to consider a vamper a land yacht, as that term is really for those enormous motorhomes.  Perhaps this one is more like a small land boat.  Whatever, we can now cruise on land as well as by sea.

MyCruiseStories blog tells stories about adventures in cruising on ships big and small. Things to do onboard and in port. Anything connected to cruising. Also food, travel, recipes, towel animals, and the occasional random blog.
View all posts by LBcruiseshipblogger →
This entry was posted in Randoms, Uncategorized and tagged camper van, camping, photos, road trip, travel, vamper. Bookmark the permalink.

5 Responses to The Land Yacht