It’s All About the Pearl

Posted on December 15, 2012 by LBcruiseshipblogger

Ships in Ketchikan, my original photo of the Pearl

It all started with a random picture.  An Alaskan wilderness small-ship cruise I once took on the Safari Quest ended in Ketchikan on a beautiful sunny fall day.  Strolling through town, camera in hand, I just happened to glance at the cruise ship dock and thought a couple ships sitting there looked picture perfect.  So I took the perfect picture.  Perfect for me anyway.  I had just started writing this cruise ship blog, and the photo I took that day of the Norwegian Pearl and Holland America Rhyndam ended up as the banner on the top of my blog.  Norwegian has such colorful ships and the Pearl is an especially pretty one.   Very photogenic too.  Cut from that photo, the Pearl is also my profile picture on facebook and wordpress gravatar.

At the time I had never sailed on either ship.  I had sailed with both Holland America (on the Oosterdam) and Norwegian (on the Sun) at that point, but never the Pearl or the Rhyndam.

About a year ago we spotted the Pearl in Grand Cayman while cruising on Carnival Liberty.  Quite excited to spot my banner ship I took pictures of course, but none turned out as nice as my original one from Ketchikan.  On this year’s cruise the Pearl stopped in Grand Cayman along with Carnival Magic, Holland America Nieuw Amsterdam, Royal Caribbean Freedom of the Seas, and the Coral Princess. 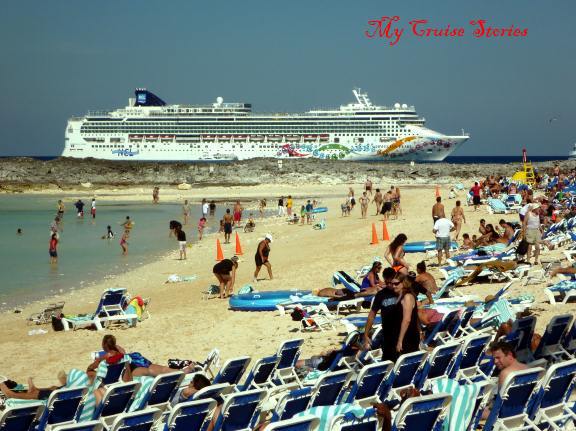 The Coral Princess looked tiny in the Caribbean next to so many larger ships and the Pearl, which is bigger than the Sun, was not one of the bigger ships in the area either.  Quite a change from the cruise I took in Alaska on the Sun where we often spotted the Coral Princess in port where it and the Sun seemed like the biggest ships there at that time.  Funny thing about that trip, it turns out the current captain on the Pearl was also the captain of the Sun when I sailed on it.

Shortly after last year’s trip, John booked us for the trip we took this fall.  We started with a transatlantic on Carnival’s Breeze, a ship so new it was not even built yet at the time we planned our trip.  He figured we’d already be in Miami at the end of that cruise so we might as well spend a week cruising around the Caribbean.  We love Caribbean cruises.  We booked on the Jewel.  I thought at least it was a sister ship to the Pearl so I would get some idea of the design of it on the inside, though the decor varies even among sister ships.

After a couple months or so we got a notification from Norwegian that our trip had gotten switched from the Jewel to the Pearl.  I felt quite elated at that news, finally a chance to sail on the ship that has graced the banner of my blog since nearly the beginning of its existence.  (The blog’s existence that is, the Pearl launched in 2006.)

fish carpet in halls between staterooms

Norwegian Pearl is just as beautiful on the inside as she is on the outside.  Ornate ceilings and fancy decorated walls give way to brightly colored whimsical carpets.  In the hallways to the passenger rooms tropical fish adorn the carpets.  The areas near elevators have plain blue, making them quite easy to spot from down the hall due to the lack of fish.

Throughout the ship as one public space gives way to another, the décor changes, never leaving any doubt as to where one area ends and another begins even when walking through a line of three bars in a row.  Each area has its own carpet, most brightly colored and decorated with cheerful patterns.

It’s not just the ship that makes a cruise on the Pearl special.  The very friendly crew seem quite happy with their jobs and more than willing to do whatever they can to give passengers a wonderful vacation.  The ship gets top ratings on health inspections and safety too.

The Pearl had something I have not seen on ships I sailed on previously.  Just behind the bridge it has a viewing room with windows into the bridge so any passenger can come and watch the bridge crew at work whenever they want.  That room also contained a large size model of the Pearl.

At the gift shop I got my own tiny ship.  A Christmas ornament Pearl to add to my collection of cruise ship Christmas tree ornaments.  I try to get an ornament of each ship that I sail on.  I’m missing both the Holland America ships though.  I don’t know whether Holland America doesn’t have them, or if they were just out of them on both the Oosterdam and the Westerdam when I took those cruises.

MyCruiseStories blog tells stories about adventures in cruising on ships big and small. Things to do onboard and in port. Anything connected to cruising. Also food, travel, recipes, towel animals, and the occasional random blog.
View all posts by LBcruiseshipblogger →
This entry was posted in Norwegian, Pearl and tagged cruise ship, cruise ship Christmas ornament, Norwegian Pearl, photos, travel. Bookmark the permalink.

12 Responses to It’s All About the Pearl