Posted on December 8, 2012 by LBcruiseshipblogger

Cruise ships safely sail the waters of the world on a daily basis.  People come, people go and the ships sail on.  Nobody thinks twice about getting into their car.  Most board trains, planes, and busses without a care too.  Why then do so many people question the safety of a cruise ship?  The answer doesn’t lie with a ship’s actual safety, it lies with the press.  Things so seldom happen to these large human filled ships that when something does it makes the news in a big way.  Car crashes?  Commonplace, not news unless somebody famous is involved or it is a particularly spectacularly bad crash.  Even planes, trains and busses have more incidents than the mighty cruise ship.

There’s no deck under the lifeboats on Carnival Breeze

Unlike the Titanic, these modern-day behemoths have life boats or rafts enough for all on board.  They have state-of-the-art navigation systems, stabilizers, and well-trained crews. 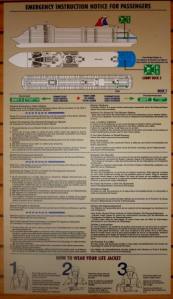 Safety Instructions posted on inside of cabin door

Regardless of the cruise line, every cruise I have ever taken on one of these large ships has started out the same.  Shortly before the ship leaves port, they have a mandatory safety drill.  All passengers must attend, regardless of how often they cruise or even if they are on the second leg of a back-to-back cruise on the same ship.  That is how important safety is to the captain and crew, and of course the cruise lines as well.  The Costa Concordia was a rare exception where the captain did everything wrong not only after the accident, but by not performing the essential safety drill before leaving the dock and sailing far from the charted course, he did everything wrong before the accident as well.

The crew gives passengers a warning when the drill will start soon.  Passengers need look no farther than the ship’s card they carry everywhere that serves as room key, onboard credit card, and ID for leaving the ship and reboarding at port stops to find the number of their muster station.  This info is also posted on the inside of the cabin doors, along with maps of the interior of the ship. 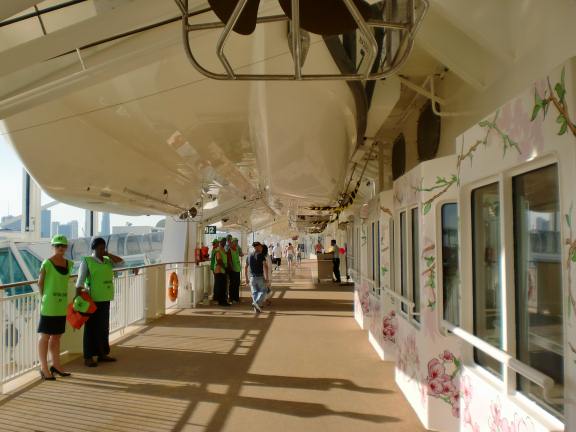 safety crew at muster station under lifeboat on the Pearl

While the safety drill is nobody’s favorite part of a cruise, it does bring peace of mind knowing where exactly to go in time of emergency should one ever arise.  Sending everyone to find their muster stations in a drill before the ship ever leaves dock removes the chaos of not knowing where to go in a time that would have enough other chaos to need one less worry.

musteriing in the dining room on Carnival Breeze

mustering at the sushi bar on Norwegian Pearl

of crisis.  On this year’s cruises both on the Carnival Breeze and the Norwegian Pearl we met inside one of the ship’s restaurants.  Definitely something one would need to know in advance, especially the first time when it comes quite unexpected.  From the gathering place, the crew members in charge would lead the passengers to the appropriate lifeboat boarding area if the need ever arose. 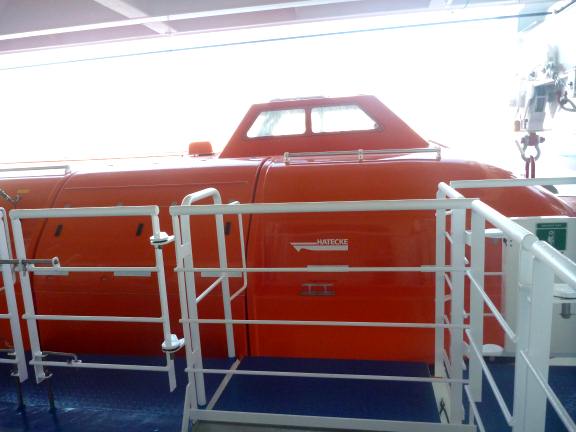 The majority of cruise ships have life boats hanging on each side, and often some barrels full of inflatable life rafts as well.  Under the life boats most ships have a deck where passengers stand, and the life boat would lower to that level for boarding.  The Breeze however had no deck below the life boats, but one where they sat at what looked like the proper level to get right in. 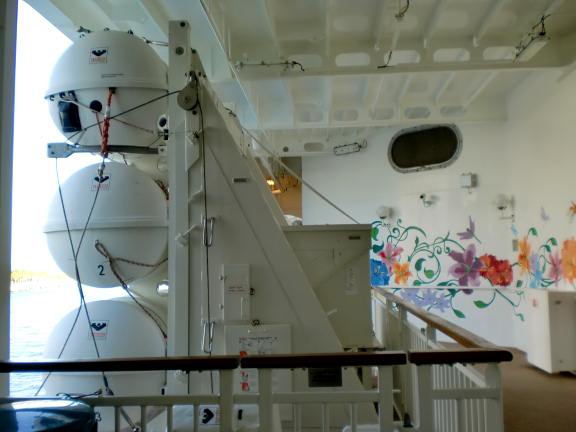 pods of life rafts in barrels

The Pearl had the deck under the lifeboats in the normal manner, and some people did muster there.  So we figured as we had an inside muster station, in the event of an emergency we probably would have evacuated onto one of the self-inflating rafts that shoots out of the barrel when needed.

The safety drill takes just a brief period of time and serves an important cause.  Instead of griping about having to attend, passengers should feel grateful that their ship took the time to insure their safety before ever leaving the dock.  Even if people already know how to put on a life jacket without the demonstration they still need to know where to go and how to get there.  Each cabin has life jackets in a closet.  At one time passengers had to take them to the drill, but on recent cruises that has not been required.  In an emergency, passengers are supposed to get the life jackets from their room before proceeding to the muster station.  Just in case not all of the passengers make it to their rooms first, they also have some life jackets stored out on the deck.

MyCruiseStories blog tells stories about adventures in cruising on ships big and small. Things to do onboard and in port. Anything connected to cruising. Also food, travel, recipes, towel animals, and the occasional random blog.
View all posts by LBcruiseshipblogger →
This entry was posted in Breeze, Carnival, Norwegian, Pearl, Shipboard Life and tagged cruise ship safety, cruise ships, muster stations, safety, safety drill. Bookmark the permalink.